Hi Justin Goes Places readers! It’s time for a break in your regularly scheduled programming. I’m Sarah. I live in Brooklyn, I rarely travel, I’m not a photographer, and I’m not a writer. I just got back from two weeks in Thailand and Justin has made a terribly ill-informed decision to let me guest post on his blog.

Fair warning: this is probably gonna be a little less family-friendly than the usual posts here. Also all the photos were taken on a smartphone but I’ll try to pick the prettiest ones.

First things first, an ode to Xanax. This was my first time ever traveling alone, and I have some real anxiety issues that cannot be solved while on a 15 hour international flight because the powers that be are not so keen on people toking up in the airplane bathroom. I am lucky to have a very generous friend that donated some of his Xanax for my travels and let me tell you, that shit is a miracle drug. Highly recommend it for situations like spending 6 hours in the basement level of the Shanghai airport, which is possibly the most depressing place I’ve ever been (and I’ve been to two Holocaust museums and a Brooklyn DMV).

After maybe a million hours on multiple planes I made it to Krabi, a province in the south of Thailand where my friend Nick lives. Krabi Town is a beach town where everyone is super chill all the time and as an uptight New Yorker, being surrounded by people that are calm and well-adjusted is incredibly unsettling. Once I got over the fact that it was not only acceptable but expected to be lying down on a bunch of pillows while drinking in a bar, I warmed up to Nick’s regular haunt. 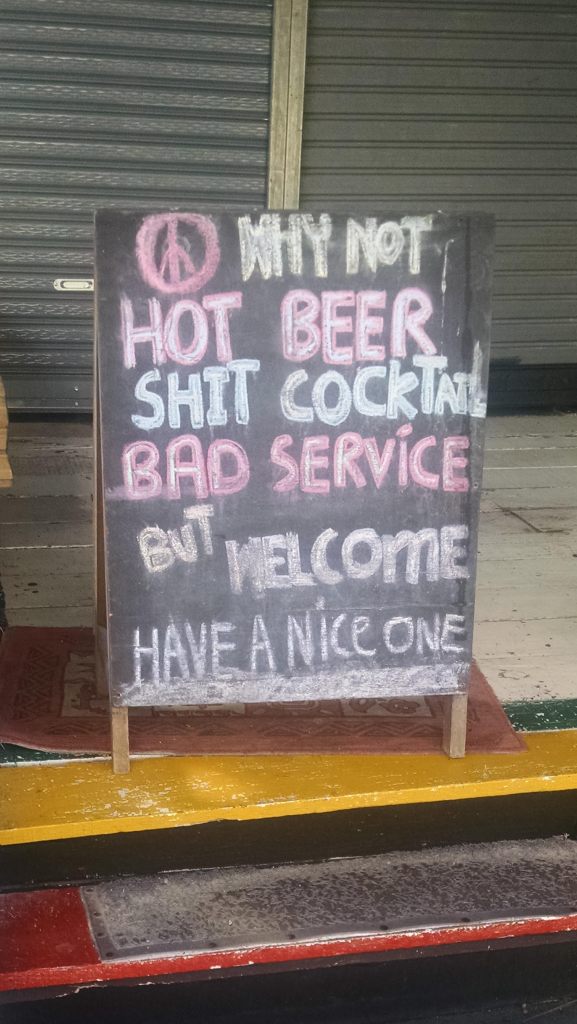 For my first morning I took a songtaew (a version of public transit that’s basically a covered pickup truck with two benches) to Ao Nang, the main beach area. Ao Nang is tourist central, so when Nick got off work he took me on his motorbike to a little place called Dawn of Happiness to watch the sunset, which was definitely an improvement. Because my body doesn’t understand the concept of “vacation” or “sleeping in” I was up at my usual work time before dawn the next day. I wandered down to the docks to catch the sunrise, which was an acceptable consolation prize for being up so early. I work at farmers’ markets at home, so I headed to Maharaj market, which was packed with locals in the morning rush. I was the only farang (white person) in the whole place, but being in the market was strangely comforting. As they say in Thailand, “same same but different” – it was just like the New York markets, but with more chilies. Then I hopped on a songtaew to Tiger Cave Temple, where I did a nice little nature walk around the caves where the monks live before starting on the 1,237 steps to the top of the mountain. 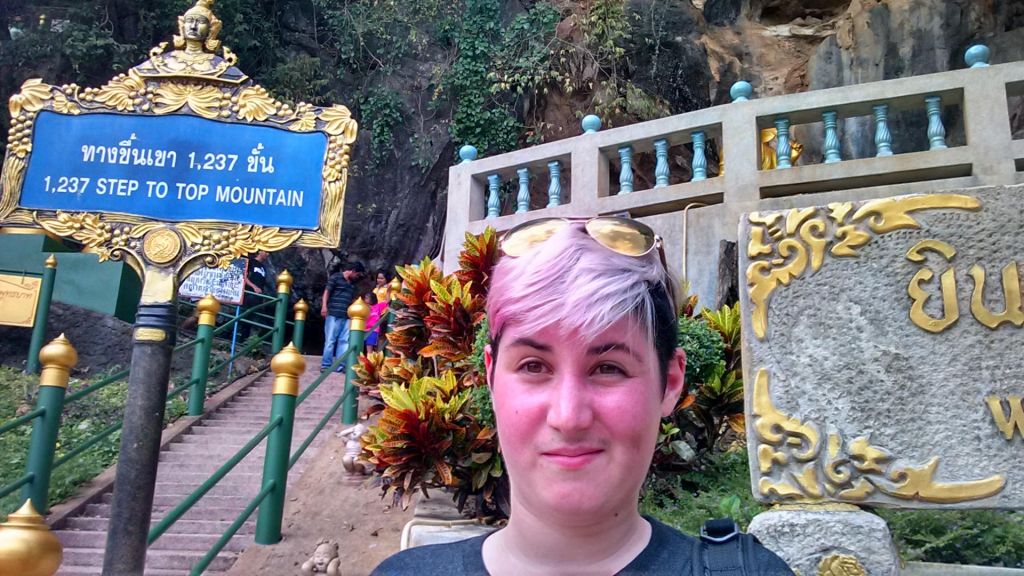 I lived in a 5th-floor walk-up in Manhattan for a year, and if you’ve ever wondered what it’s like to try to get from the street to the top floor when you’re drunk and stoned at 4 in the morning, it’s a lot like climbing 1,237 steps to the top of a mountain. The mountain has a better view though. Nick met me at the top and we hung out until we saw a rainstorm rolling in, which is a totally crazy thing to say, but we actually saw a rainstorm over a nearby peak. Insane. The next day we took a boat to Railay, where there are a couple of caves where people make offerings to a fertility goddess or something oh man who cares there are literally just PILES OF DICKS and it’s great.

Railay is known for its beaches, but I’m not much of a beach person, so we walked on the opposite side of the island to an outdoor bar where you can relax on platforms out over the water. We ended up spending the entire afternoon there smoking spliffs and listening to hip hop. It was chill as fuck. 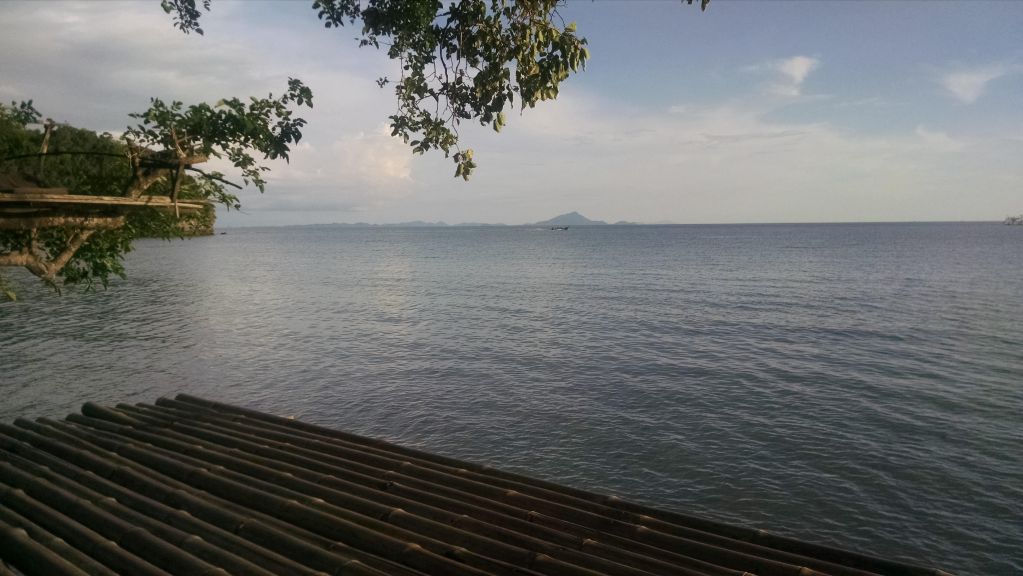 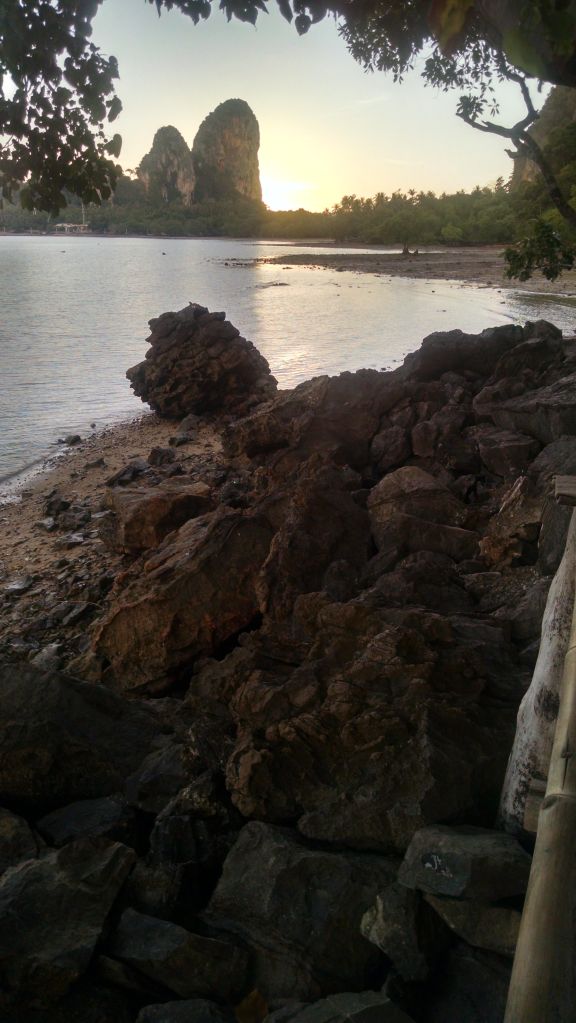 Nick’s tattoo artist friend was bartending at another spot in Railay, so we walked around until he closed up the bar, then went back to his place in Krabi so I could get a tattoo I’d been sitting on for a while. The tattoo is done with a long bamboo pole with a needle attached, and repeatedly dotted by hand. It’s surprisingly less painful than a machine tattoo, and heals ridiculously fast (less than two days). If you’re going to get a tattoo, go for the bamboo.

We had grand plans to go hiking again, but we could still barely walk from our Tiger Cave Temple climb, so we spent the next day at Nick’s place getting stoned, watching Orphan Black, and eating snacks from 7 Eleven. 7 Eleven basically owns Thailand. In every single city and town I was in, there was one on every other street corner. 7 Elevens are more common in Thailand than Duane Reades in Manhattan. It was bizarre, but I can’t complain, since half the nights I was traveling I was too exhausted to go on the hunt for vegetarian food, so I just grabbed an armful of snacks and crashed.

Nick works as a scuba diving guide, so he promised for my last day in Krabi to take me out on the boat to go snorkeling. I’d never been before so I was super stoked and it was totally awesome and you can’t see any pictures of it because you can’t take photos on a phone underwater. You’ll just have to believe me that I saw a lobster and giant clams and a sea snake and barracuda and crabs and a bunch of other cool fish that made me so excited that I kept laughing and getting water in my mask. Here’s a picture of the ocean. Sorry.

After five days in Krabi I wasn’t terrified to ride on the back of a motorbike and I had reached unprecedented levels of chill, so I left because WHO HAS TIME TO BE CHILL WHEN YOU HAVE TO SEE THE REST OF THE COUNTRY IN 8 DAYS. More on those 8 days later, if Justin doesn’t block my login after this mess.