Getting around Thailand is exhausting. It’s not particularly difficult, as there’s plenty of transit to and from Bangkok, but it’s a whole lot of walking around looking for unmarked white vans that will take you where you want to go (not actually as sketchy as it sounds). Since I was traveling almost every other day, which in retrospect was not the best planning, I won’t bore you with the details of every trip. But to give you an idea, here’s what I did to get to Khao Yai.

I flew from Krabi to Bangkok, then took a bus to Victory Monument, where I walked around in circles asking locals for directions until I found what was basically a large alley where you can buy a seat in a van to Pak Chong. I paid the fare to a woman sitting in a row of desks and she told me the license plate of the van to get in. Once I got to Pak Chong I repeated the process of walking in circles and asking for directions, and found a minibus (same setup as a songtaew but bigger) stopping at Khao Yai. After I paid the entrance fee the park guard had me wait on a bench until one of the trucks driving in agreed to take me the rest of the way into the park. Like I said, exhausting.

Initially I had planned to rent a bungalow to spend the night in Khao Yai, but a Thai gentleman who had come in on the same minibus hitched a ride into the park with me and changed my plans. He told me he was retired and living in Bangkok, that he came up often to hike, and that the cheapest and best way to stay in the park was to rent a tent on the campsite. Then he told the driver not to stop at the visitor center and instead to drop me off at the Lam Ta Khong campsite with him. All well and good, except that I hadn’t pitched a tent in, oh, I don’t know, seven years. 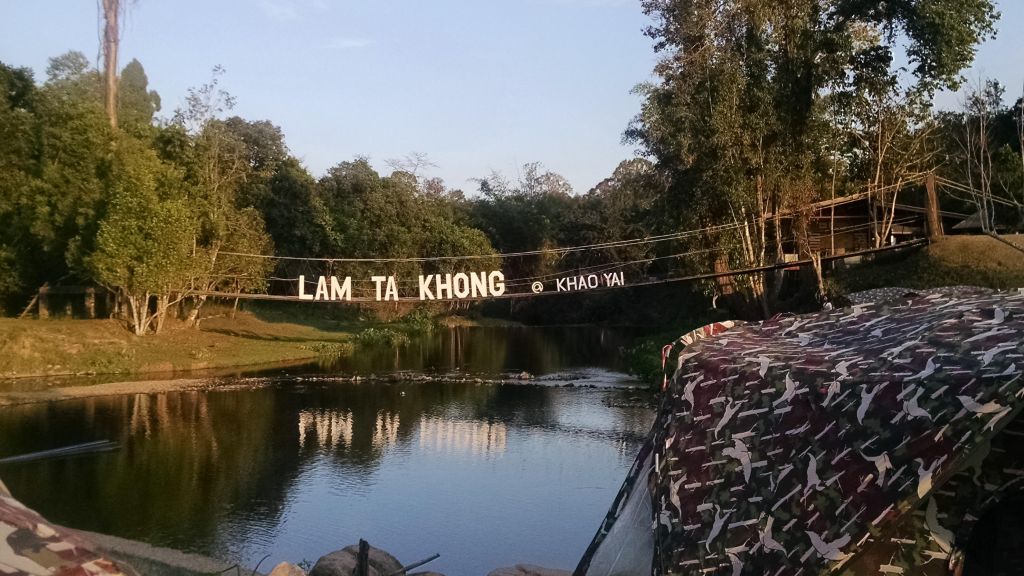 My closest animal sightings were in the campsite itself – a bunch of deer and monkeys that did not give a single fuck about humans being nearby. 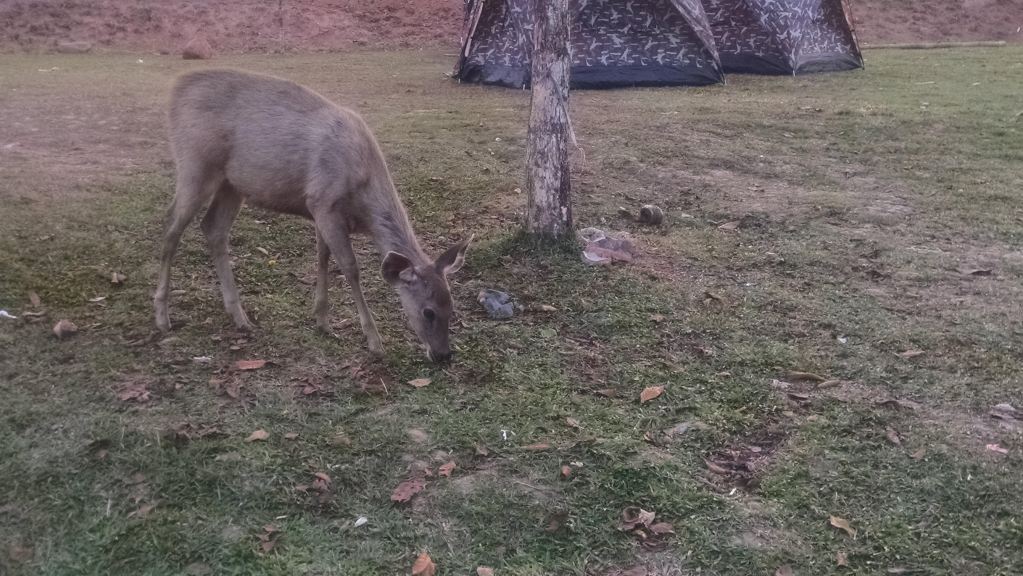 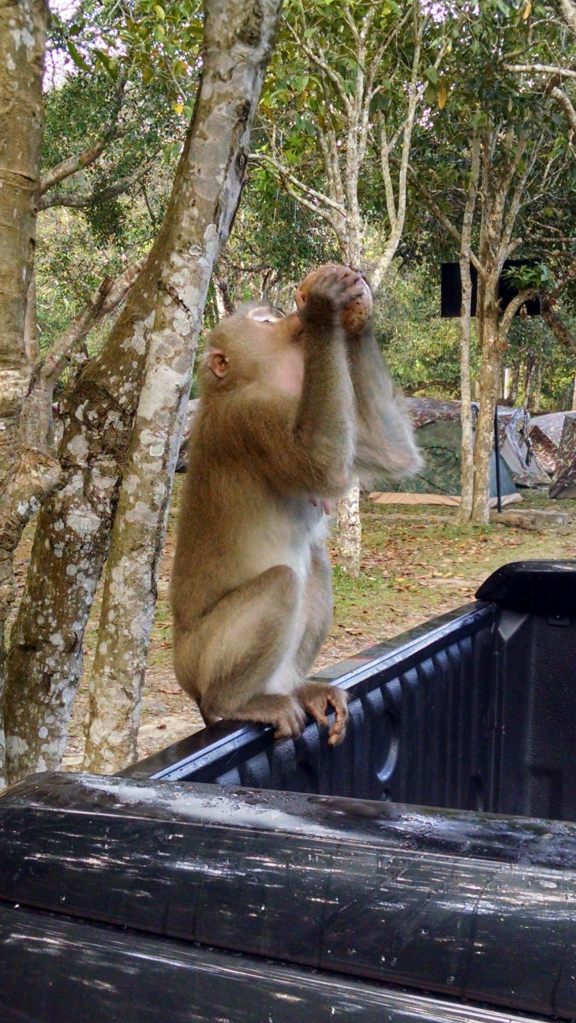 I spent the next day hiking as much as I could. I saw waterfalls, big trees, cool birds, weird bugs, and a snake. Here’s some pictures of nature. 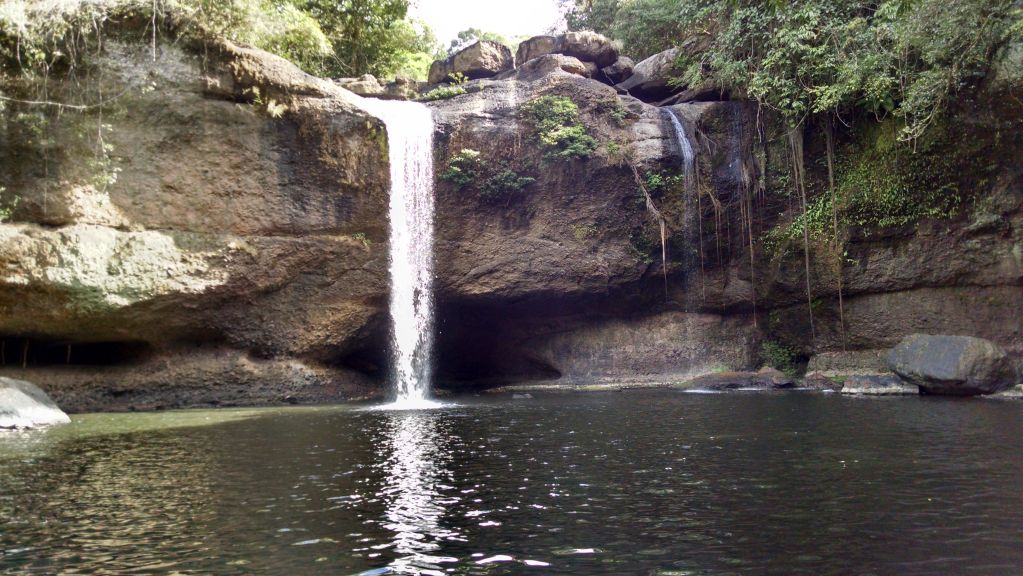 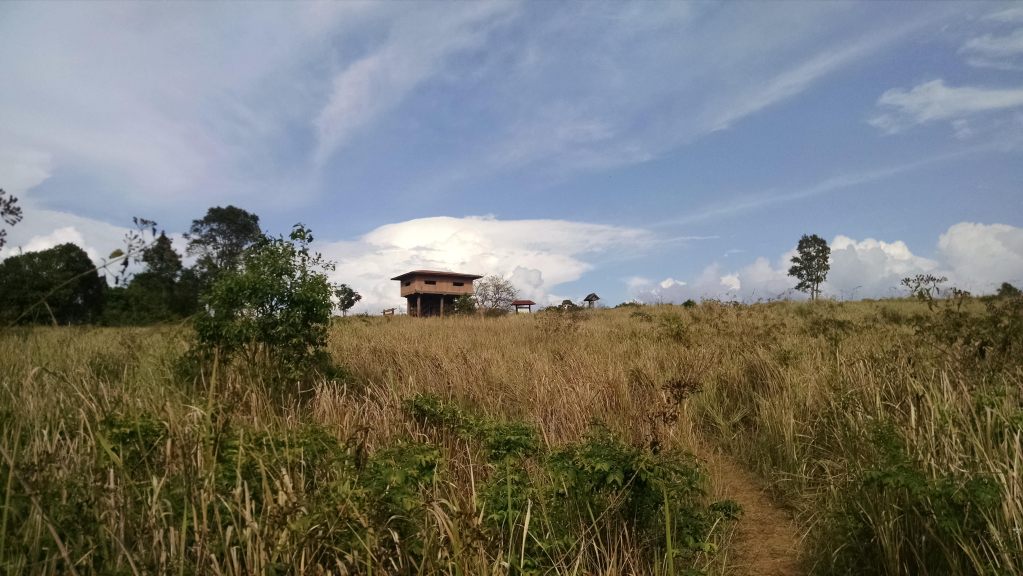 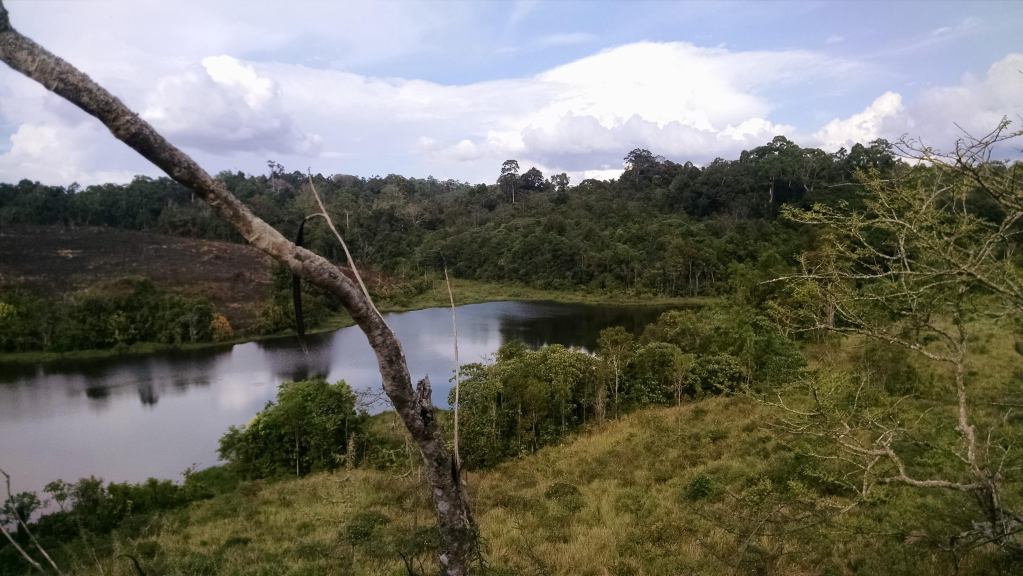 By the time I got to the end of my afternoon hike, it was getting late, and I had to make it back to Bangkok that night. That meant hitching a ride to the park entrance, hitching another ride back to Pak Chong since the minibus wasn’t running anymore, and catching a van to Bangkok. I stopped to take a photo for a couple at the edge of the trail and asked them which direction I should start walking to be on the right track for the northern park entrance. They offered to give me a ride not just to the entrance but all the way back to Bangkok. Thais are literally the nicest people in the world. I still can’t wrap my head around it. They even insisted on giving me car snacks. Thailand is a twilight zone of kindness that I will never understand.

I was really excited about Chiang Mai since I heard there was a small underground punk scene there, and I had scoped out some bars online in the hopes that I could catch a show. I ended up going to a place off the beaten path called 7 Pounds, which was awesome but empty. I hung out with the owners Jeszy and Nok and talked to Jeszy about the scene. Turns out Chiang Mai was off the hook until this year, when the cops started cracking down on shows and parties, and now every bar closes at midnight. Not exactly the punk rock experience I had hoped for, but Jeszy and Nok were cool as hell and showed me a good time.

My second day in Chiang Mai I finally went to my first cat cafe. The cats weren’t nearly as cuddly as mine back home, but they were fluffy and adorable and if every Starbucks was replaced with a cat cafe the world would be a better place. 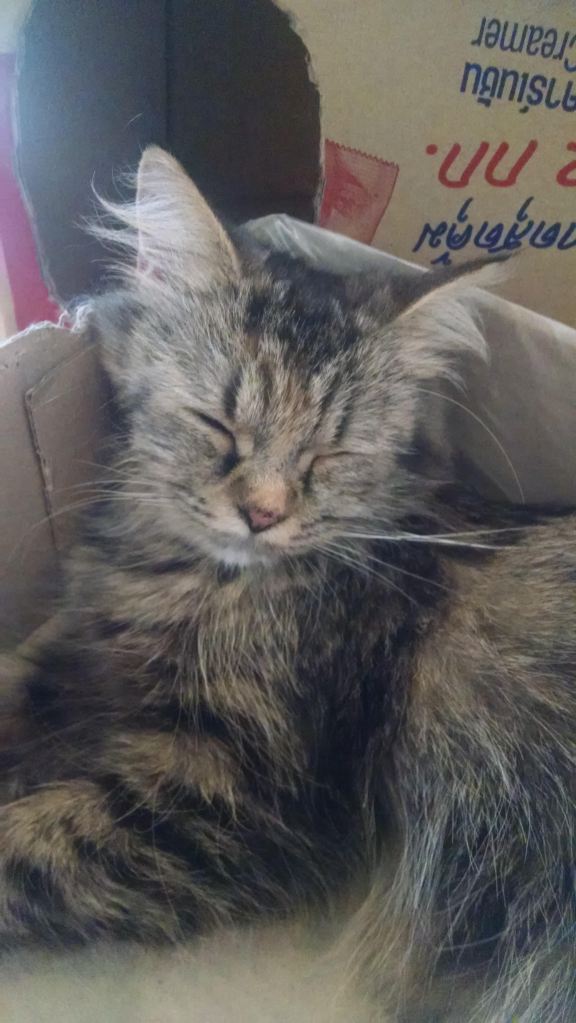 I was too worn out and pressed for time to find a hiking trail to the mountain temple Wat Doi Suthep, so I settled for a nausea-inducing songtaew ride and a few hundred stair climb up. The temple offers a good view of the city, if you can get through the massive wall of tourists to see it. 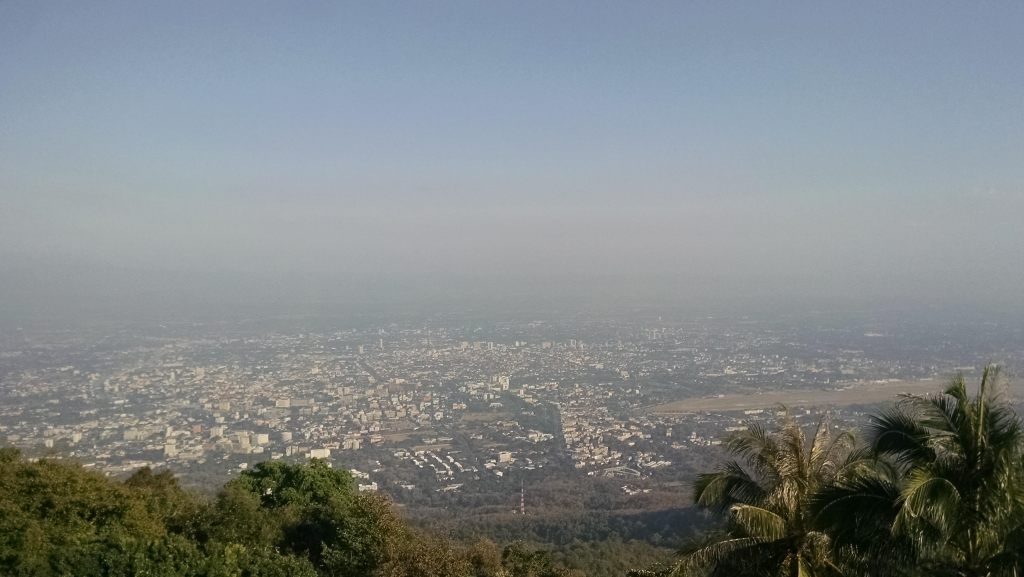 I reserved my last day in Chiang Mai for walking around the old city and visiting temples. I probably should have known that temples wouldn’t really do it for me, since I’m not particularly big on religion, history, or art. Still, it wasn’t an overall bust since I got to look at pretty things on a beautiful morning. 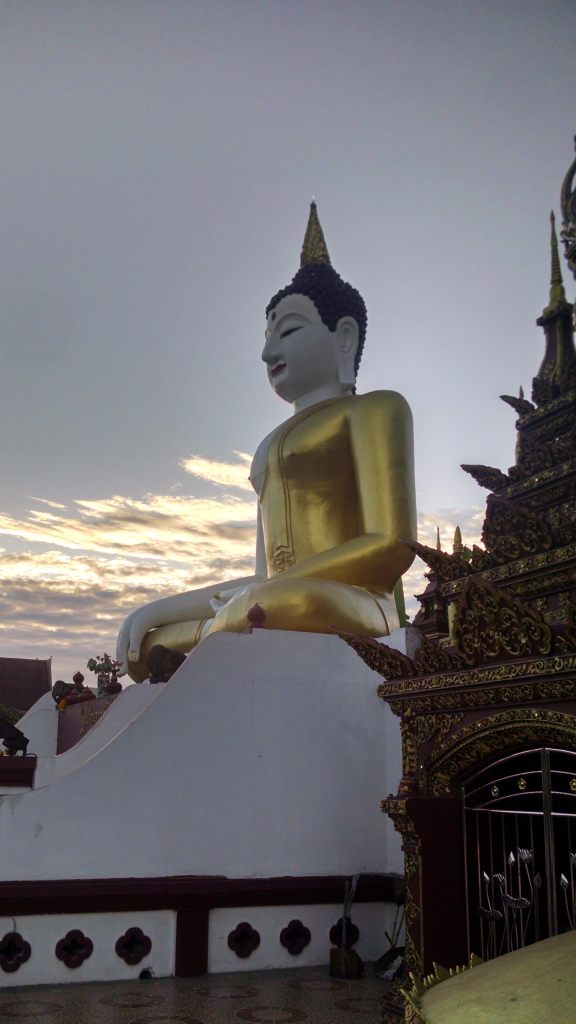 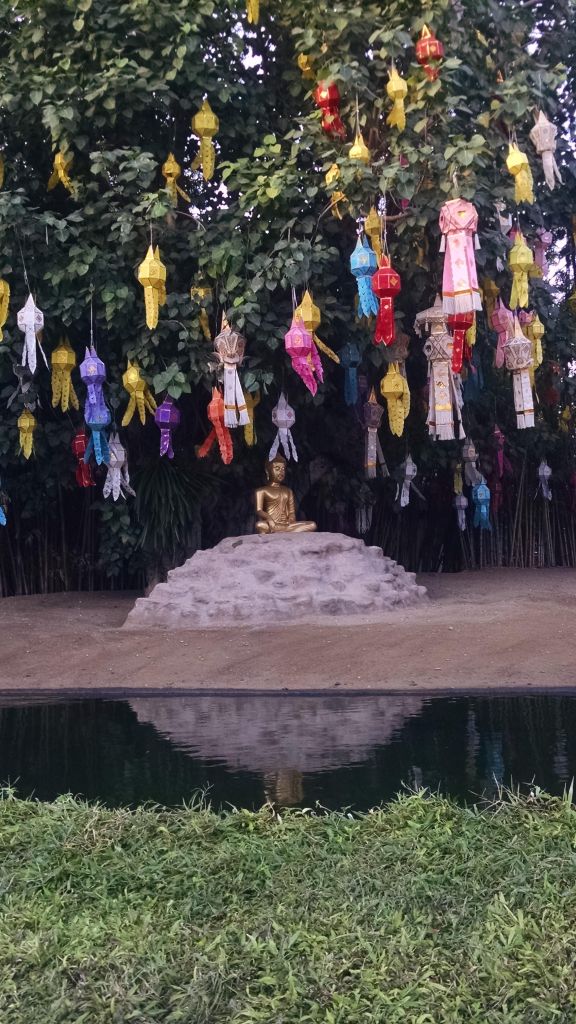 Erawan, the 7-tiered waterfall, is a few hours outside of Bangkok, so I took a day trip to check it out. I thought I was getting a nice mile and a half steep hike to the top, but the first two thirds was just more fucking steps. I should have kept track over my trip, but between stairs to temples, stairs on hikes, and stairs to the skytrain in Bangkok, I probably climbed up 5000 steps or so. At least now the one flight to my apartment is a lot easier.

Since it was the weekend even the top level of the waterfall was crowded, but I got a nice dip in. The water was full of fish that nibble on the dead skin on your feet, which was a little weird at first but I got into it. Plus apparently people pay loads of money to have those kind of fish eat their feet at spas, and I love getting free shit. 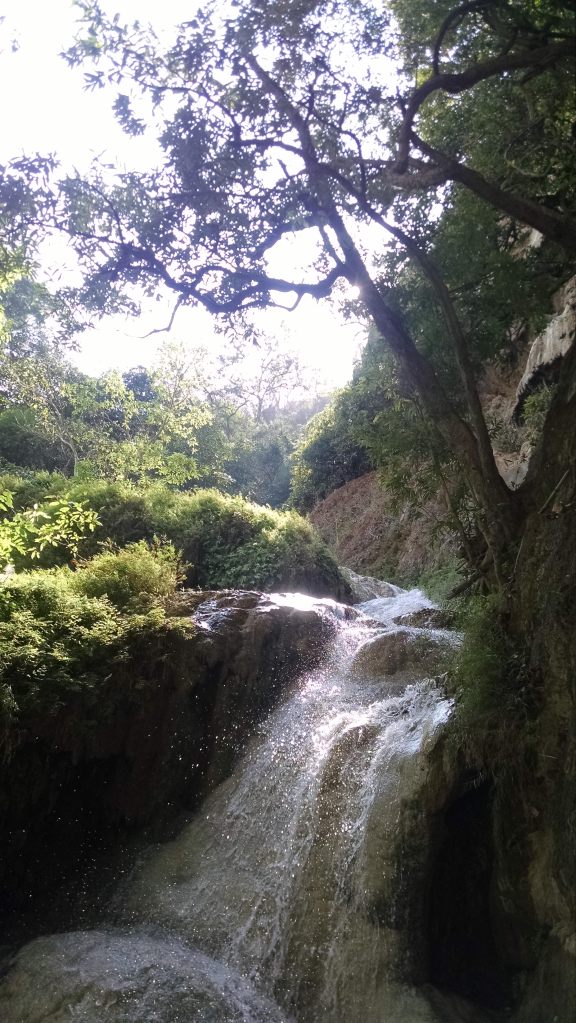 When I got back to Bangkok I ended up in the Khao San area, and I stopped to take a peek since I was told it was a must-see. Here’s the thing, though, people tell tourists Times Square is a must-see when it’s actually hell on earth and every minute spent there is a waste of precious time that could be spent literally anywhere else. Khao San was exactly like Times Square, but smaller, and somehow worse? I guess I can say I’ve seen it now, but at the cost of walking through it. I don’t know if it was worth it.

In the morning I took the BTS to Chatuchak weekend market, which is like a super-mall of a market. I spent a couple hours getting lost inside, and eventually grabbed the two little gifts I wanted to bring back. If you’re the souvenir type, Chatuchak is a great one stop shop, but it’s a spectacle on its own for the sheer size of it.

When I originally planned my trip, I had left off Ayutthaya, since I’m not much of a historical ruins person. Nick insisted I put the city on my itinerary, and I’m glad I did, because it was beautiful. 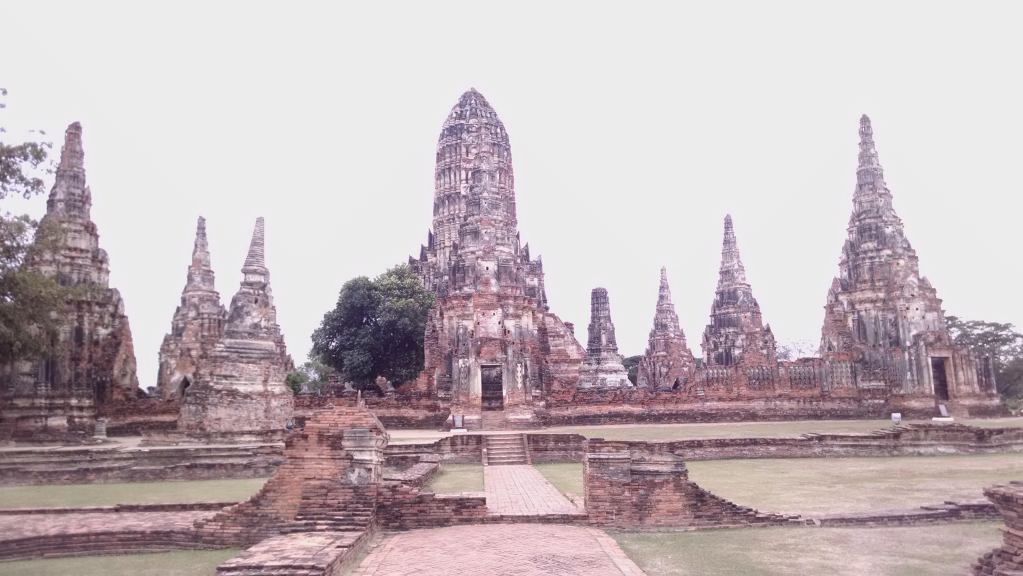 As I mentioned, I’m not that fascinated by history and religion; I’d rather hang out in nature and look at trees than temples. But holy shit, Ayutthaya gave me a new appreciation for ruins. I don’t know if I got lucky or what, but most of the time I was one of the only people on the grounds, so I got to walk around in peace and quiet. And while the crumbling Buddha statues clearly hold meaning for certain tourists, I just wandered around in awe of the decay, reveling in the grand efforts of man destroyed by man and nature alike. Embracing the futility of human labor in the face of mother nature’s infinite power might be as close as I’ll get to a religious experience. 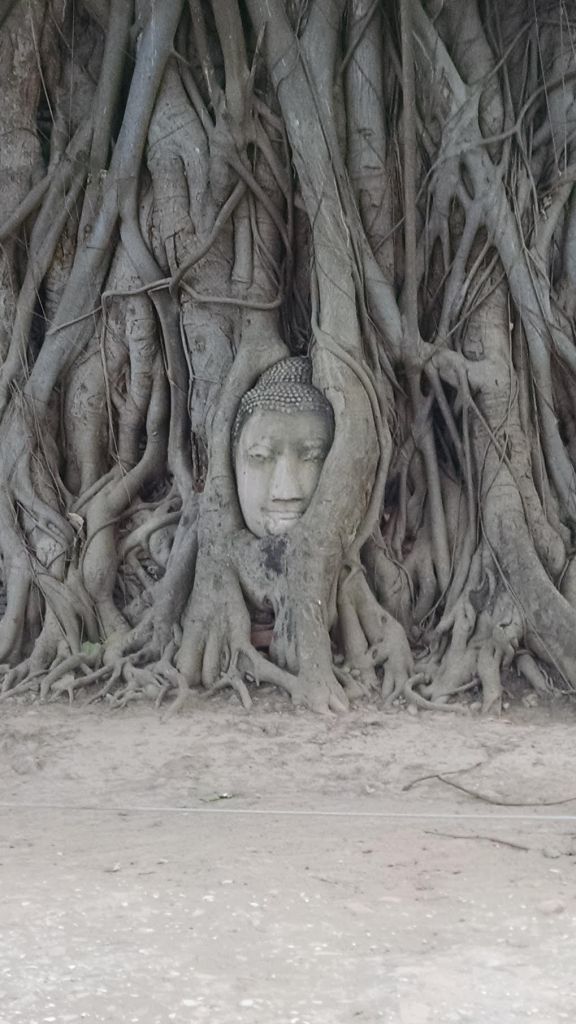 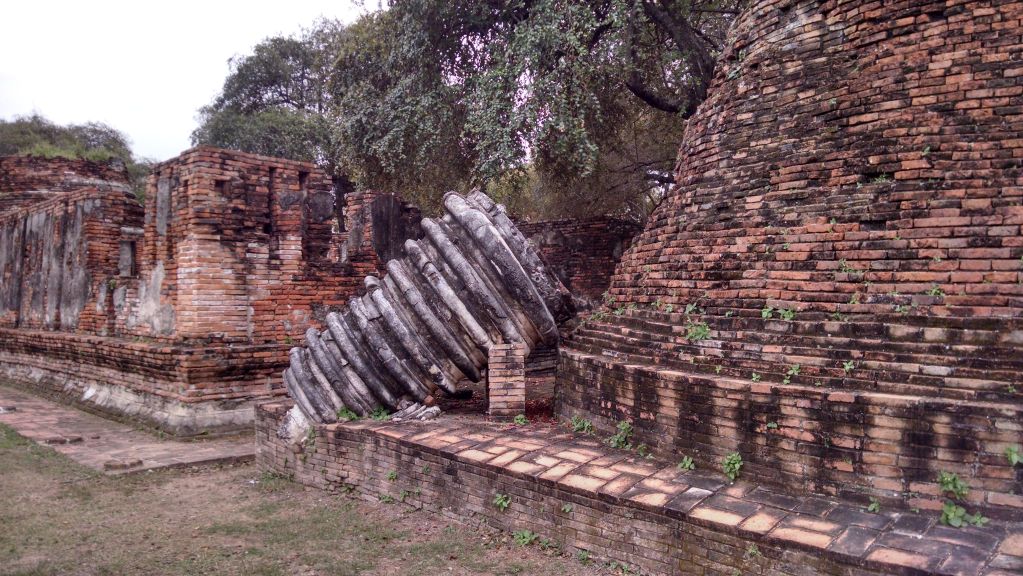 After two days biking around Ayutthaya, I headed back to Bangkok and started the long journey home to New York, but not before stopping at another cat cafe. Obviously. 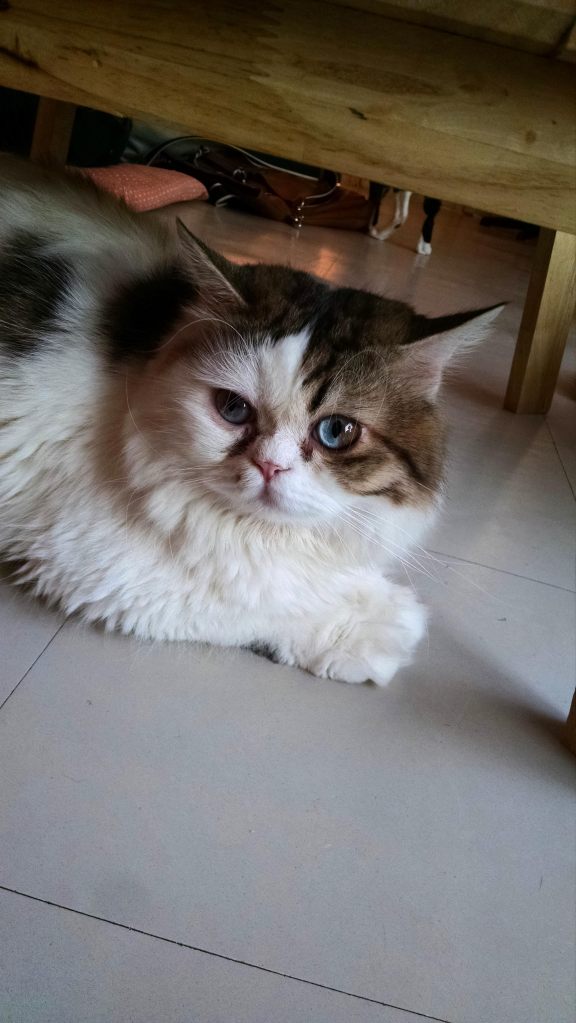 Thanks again Justin for letting me take over your blog, and thanks to your readers for putting up with me! For more photos from my trip (animal statues with dumb captions and other such nonsense) check out my instagram @caterinevauban