Even though the farmer doesn’t really speak any English, the point he makes is quite clear.  Rakija is the drink of choice in these mountains.  No need to bother with any of that other garbage.  Vodka?  No thanks. 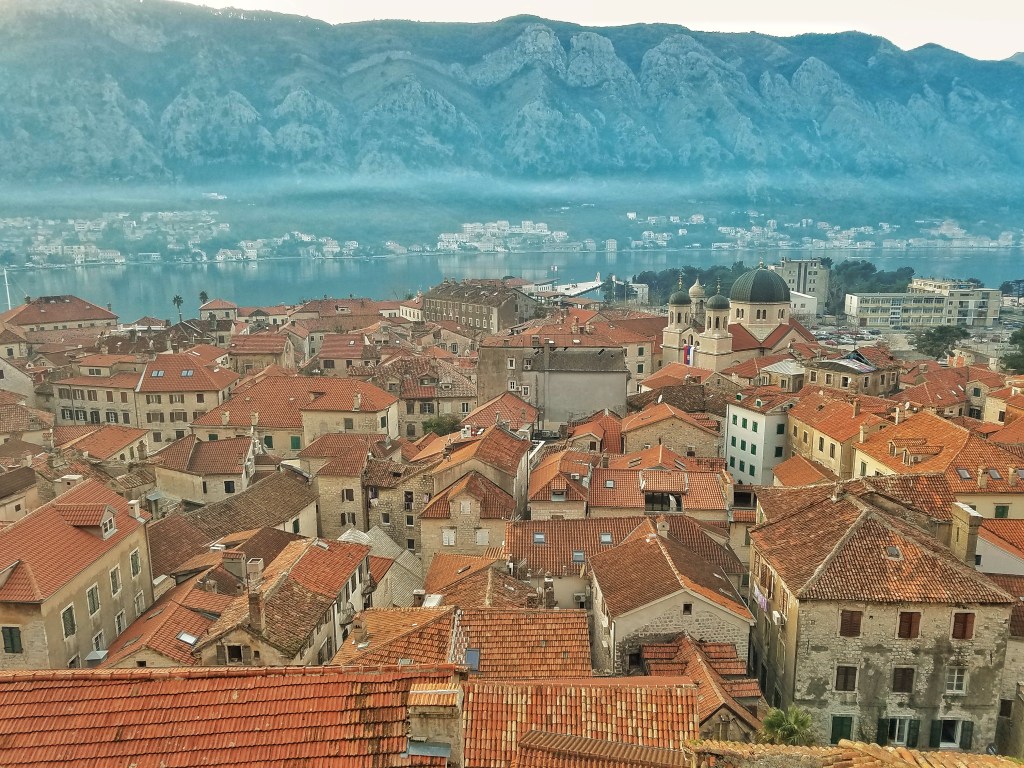 Around the small house perched high on the side of the Bay of Kotor, cats come and go by the dozens.  Two freshly slaughtered goats hang from the tree in the front yard, splayed and skinned.  A grandfather tends to the shed out back, while the wife and daughter invite us to have a seat at the small table on the side deck of the abode.  We discovered the house as we hiked up a series of 70 grueling switchbacks that snake their way up and over the eastern side of the fjord that surrounds the bay.

The Ladder of Kotor, it’s called.

Halfway up the mountain we pass a hand drawn sign attached to a stone wall.  Homemade cheese, smoked ham and “scotch-rakia”, it advertises, among other things. 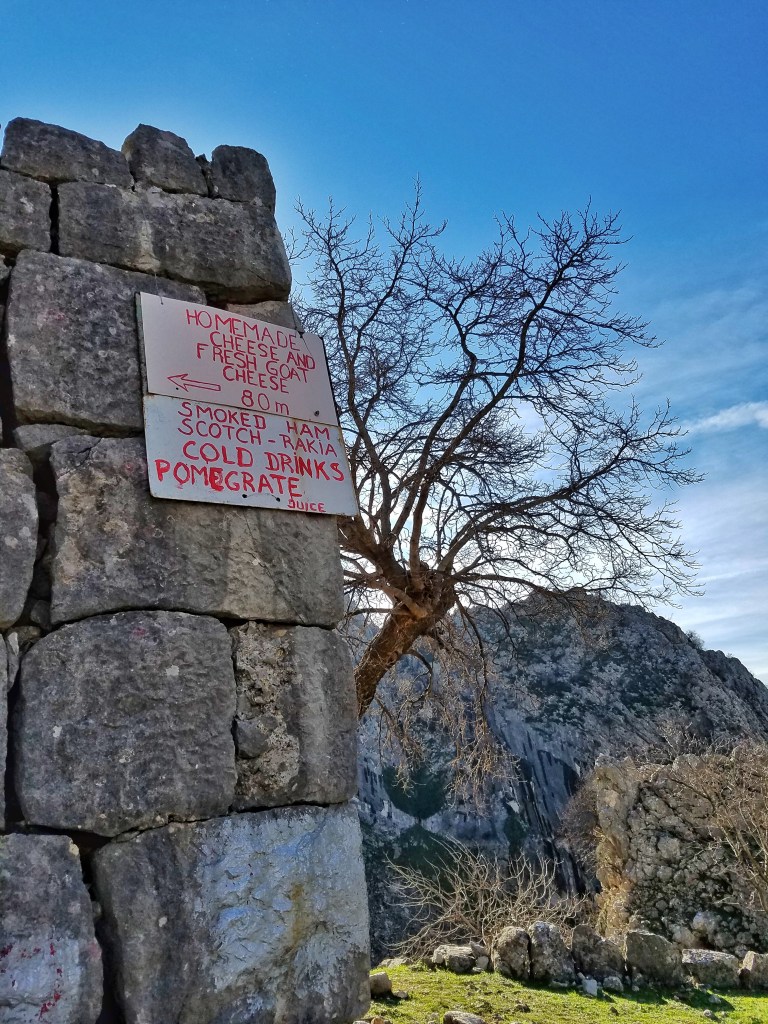 “You, rakija?”  The goat farmer gestures to the unlabeled bottle containing a clear liquid.

Of course.  Who am I to turn down a shot of homemade liquor from a stranger in the mountains? 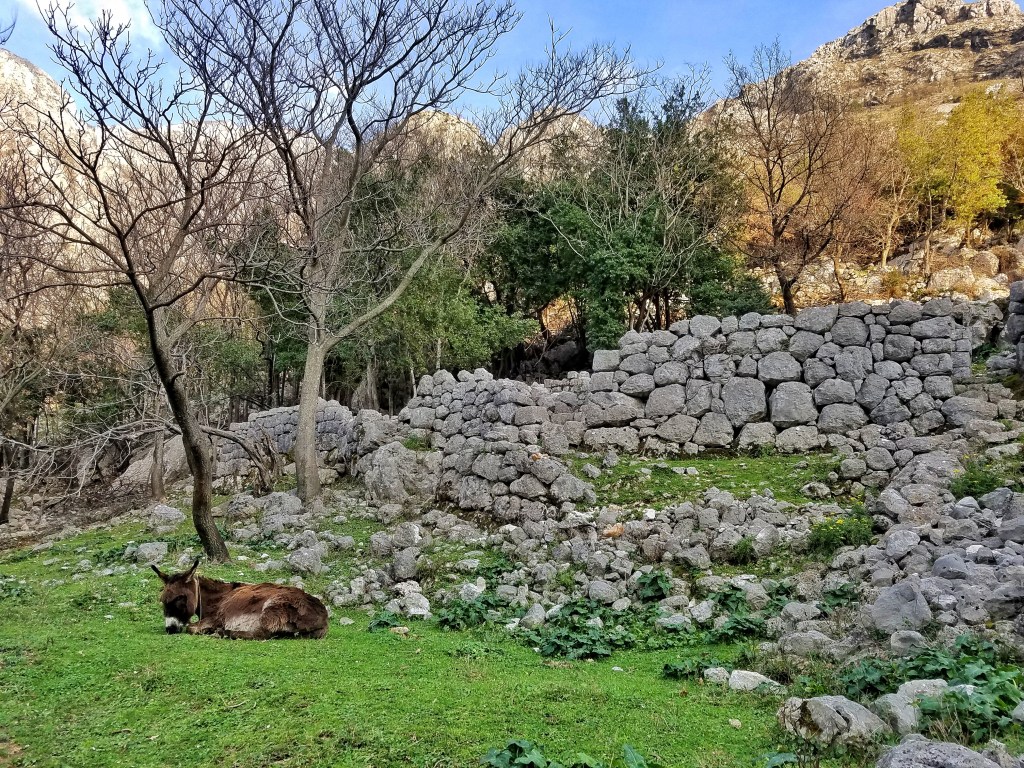 “Grape” he says, as he fills the shot glasses, indicating what rakija is made from.  “Official rakija of Montenegro” he states as he slides the shot glasses across the table toward us.  The container from which he pours was probably once a cola bottle, by the looks of it.  Just some nondescript vessel, half filled with the clear spirit.

The three of us raise our glasses, clink them together, and two of us down the contents in one go.  It tastes of tequila, but far stronger.  The farmer takes no more than a sip from his and places the nearly full shot glass back on the table.  He waggles his finger at us disapprovingly and promptly walks away.

Is rakija a sippin’ liquor?

We gaze out on to the bay from our seats as we await whatever fate the rakija will bring us once it hits the bloodstream. 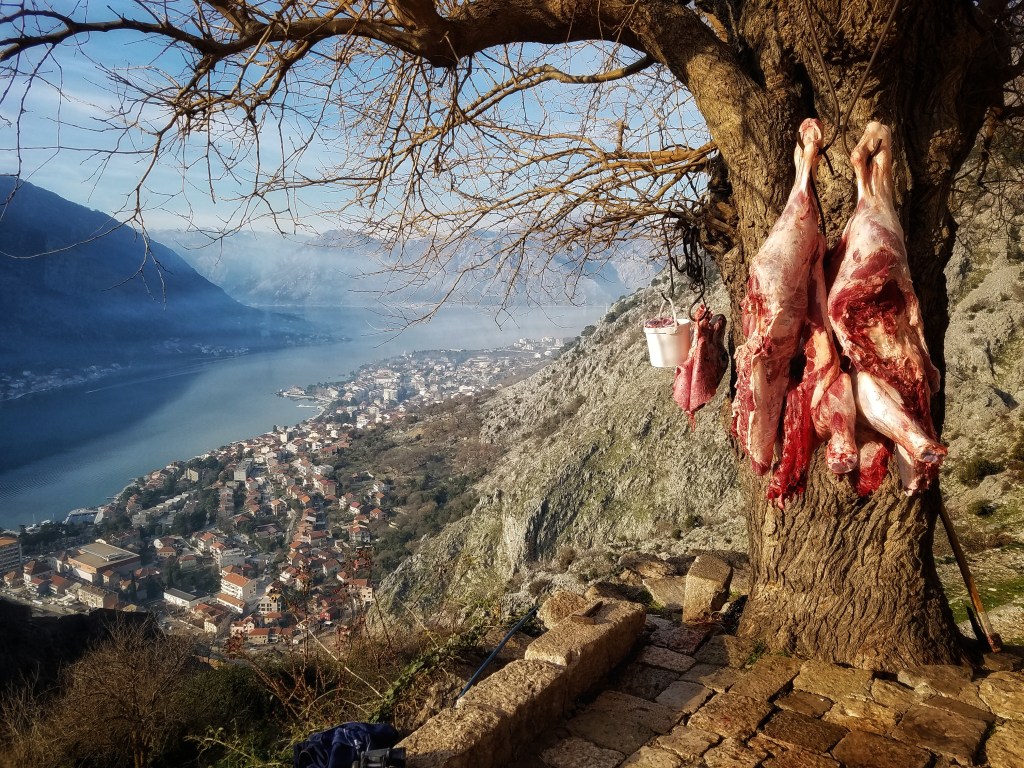 Further up the mountain, we encounter a sizeable herd of cows, idly grazing along the steep mountain slope.  How did they get here?  We had been climbing for over 2 hours and now we found ourselves wearing a bit tired and the air becoming slightly thinner.  No farm house was anywhere in sight.  I can’t fathom how these animals arrived at this elevation. 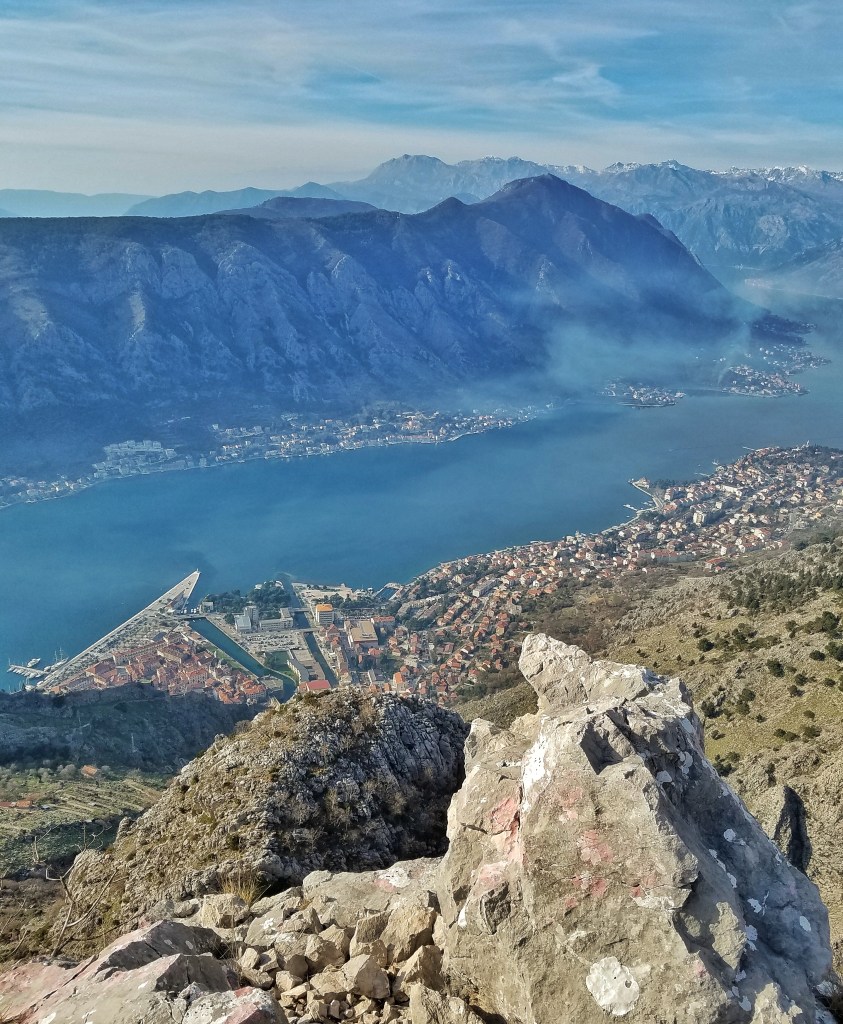 Hiking the ladder is a rewarding experience.  Moderately challenging, but with many places to stop and rest on the way up and take in the sweeping view of the villages that dot the shore far below.  Here and there lie some old stone ruins of what must have once been the homes and chapels of some former village resting alongside the old fortifications.  The crumbled remains of some old bunker provide a welcome platform for sitting and enjoying a beer to replenish our carb levels.

We find ourselves continually setting higher elevation goals.  Each time we reach what we think is going to be the end of the road for us, we convince ourselves to push on to the next higher rock ledge.  “Can’t be more than 20 more minutes to that next outcropping up there”, we seem to say each time we reach a new milestone. 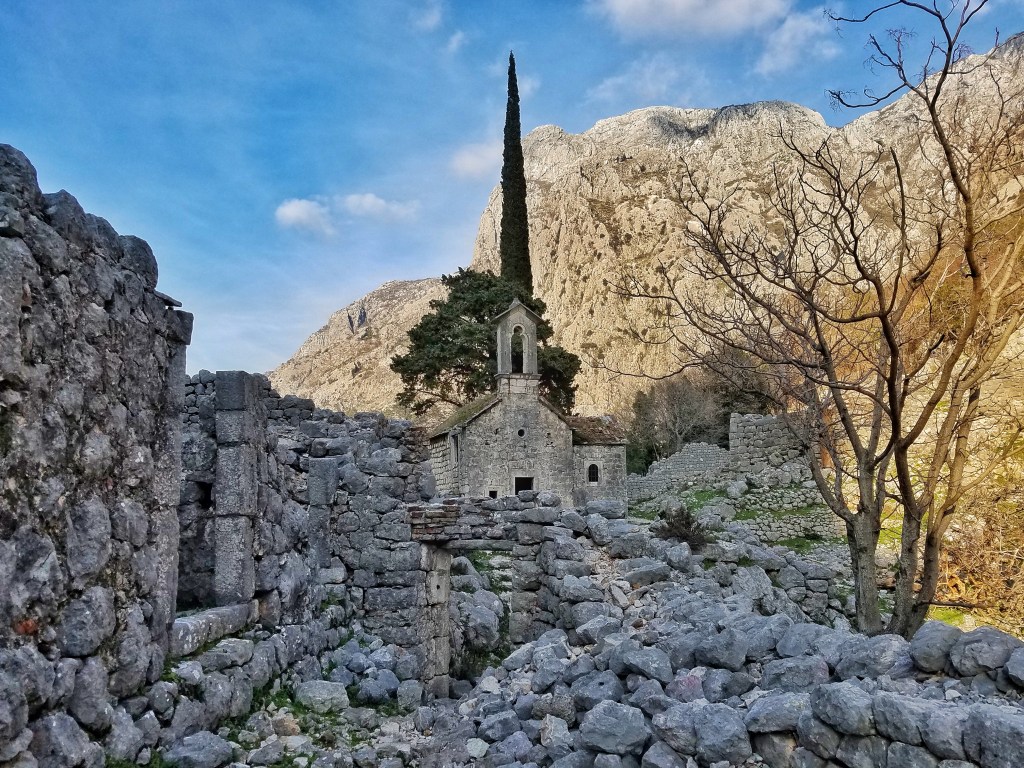 Eventually we approach the edge of a pine forest and decide to head back down.  The sun falls lower in the western sky and we hope to make it down to the old city wall for sunset.  Not before sitting for a few moments after we scramble over some rocks and take in the view as a reward for our efforts. 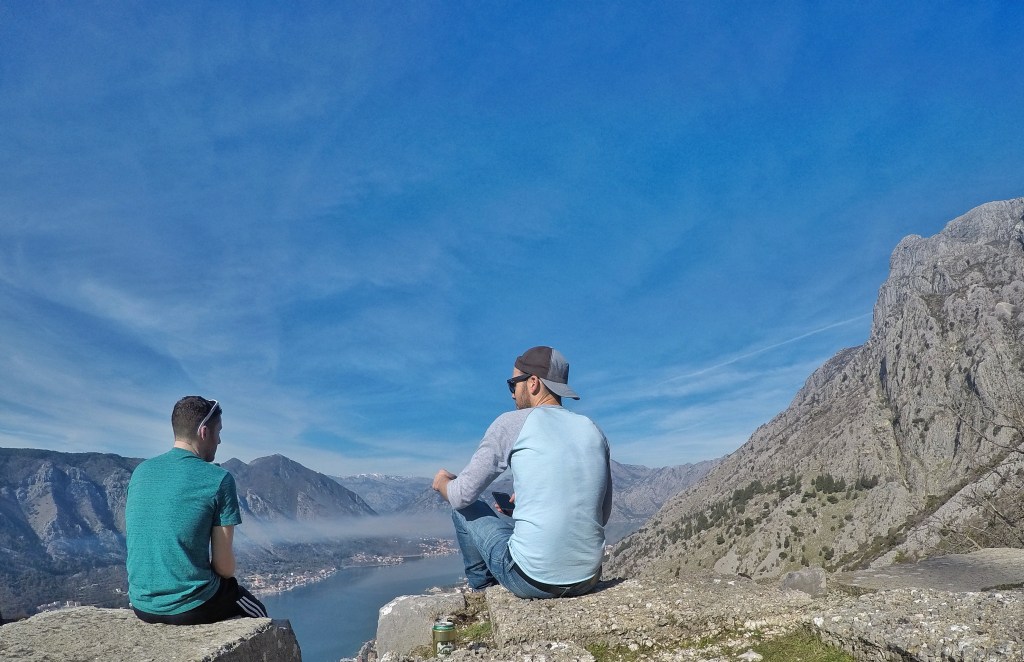 If going up sharp switchbacks for hours throughout the afternoon is tough on the calves, the journey down is a real knee killer.  The path is all loose rocks, overgrown roots and Herculean piles of shit that could only have come from the cows we spotted at the top.  We crane our necks downward to the trail, carefully watching our steps for the duration of the path back to the bottom, only briefly glancing up from time to time to take in the vista before us.

We make our way back down the path, and eventually rendezvous with the upper part of the city fortifications.  After climbing through a hole cut in the stone wall, it’s possible to scale the stairs downward and arrive back in the heart of the old town.  We stop about half way down and sit on a section of the wall, feet dangling over the edge, to watch the sunset and look on as an old woman coaxes her herd of goats up the mountainside.  “Yah, yah!” she shouts as she beats a stick behind them.  Off in the distance a brush fire burns out of control on the ridge opposite the bay. 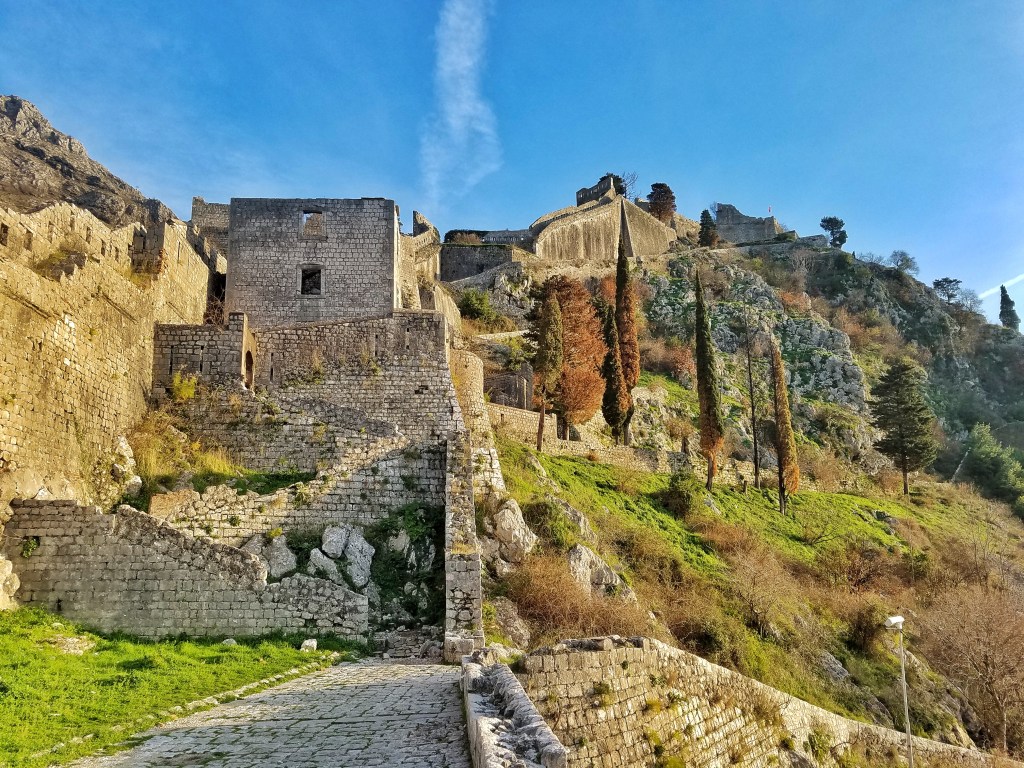 Montenegro is a fascinating country.  Though Adam and I were only in the country for a brief stay, it left an indelible impression on me in the short time we were there. The architecture is a manic contrast. Boxy, Soviet era apartment blocks dot the outskirts of the cities, while gorgeous medieval architecture, all pointed spires and stone edifices, define the central old towns of many villages. 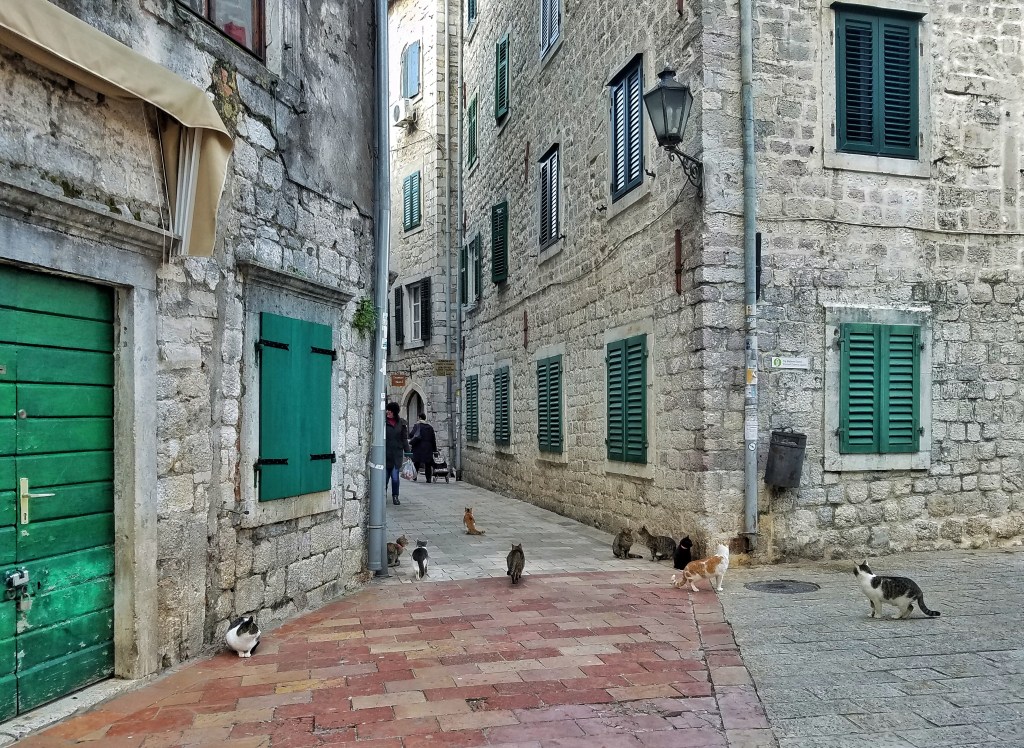 Some cities, in particular the coastal town of Budva, are a mix of ancient and modern, with some obvious rapid growth having taken place in a relatively short amount of time.  Here, towering over the compact walled old town, we find glistening new resort hotels and giant shopping malls, still smelling of fresh paint.  Cranes dot the skyline, a telling sign of the rapid growth of the tourism industry trying to keep pace with the masses that are beginning to converge on this tiny gem of a country.  At this time of year, however – late January, as it is – there isn’t a tour bus, cruise ship, or tourist to be found.  Just the empty cobbled streets, and the plethora of cats that move freely between ledges, doorways and windowsills. 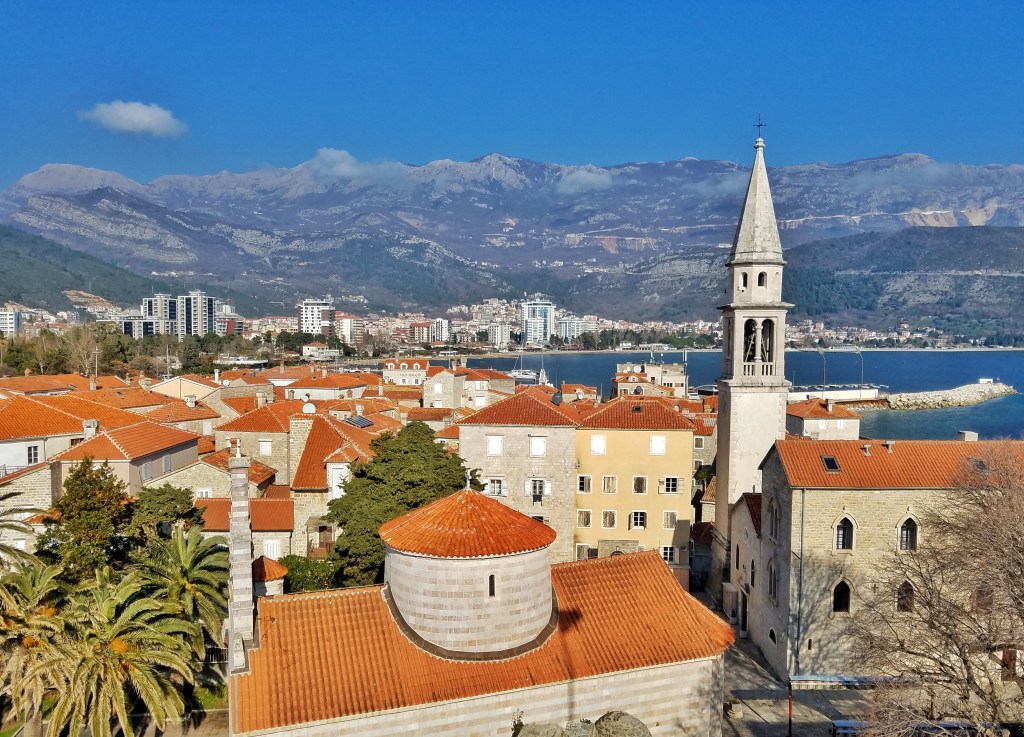 Our first stop of the trip is to the city of Podgorica, the capital of the country.  We don’t plan to stay here longer than a night.  Just a waypoint between the airport and Kotor.  Though Podgorica isn’t a beautiful city, it feels authentic.  Here, patrons and waiters alike smoke freely inside restaurants. Everyone seems to know one another.  Bus drivers honk and wave at pedestrians on the sidewalk. Gambling establishments line the main street in between bars and cafes.  The strong odor of something burning hangs densely in the air throughout the city, burning our noses and throats.  The smell permeates everything and clings heavily to our clothes.  After walking the old town for a short time and finding nothing of interest, we settle in for a late dinner at what our host refers to as the best restaurant in town, Pod Volot.  The food is good and filling, the service friendly and hospitable.  A man at the table next to us smokes a cigarette while cutting into his steak.  There is no reprieve from the smoke, inside or out.

The following morning, we arise at some ungodly hour to catch the bus to our next destination.  The rising sun gives us our first glimpse of the dramatic peaks that surround the city in all directions.  As we traverse the countryside, the views from the bus window become increasingly impressive, ending with our arrival at the show-stopper of the trip: the stunning city of Kotor, a city that looks at first glance as though it could easily be found nestled in some vast fjord in western Norway.

Having hiked the ladder of Kotor on our first day, we arise early on day two in Kotor to hike the opposite side of the bay, a ridge called Vrmac.  The hike is similar in nature to the Ladder, in regards to elevation and exertion, but with much more tree cover and less direct sunlight.  After following the switchbacks for a couple of hours, we arrive to the top of the ridge to find an old abandoned village, which seems now to act solely as a place for late night revelers, judging by the number of broken beer bottles found within the domiciles. 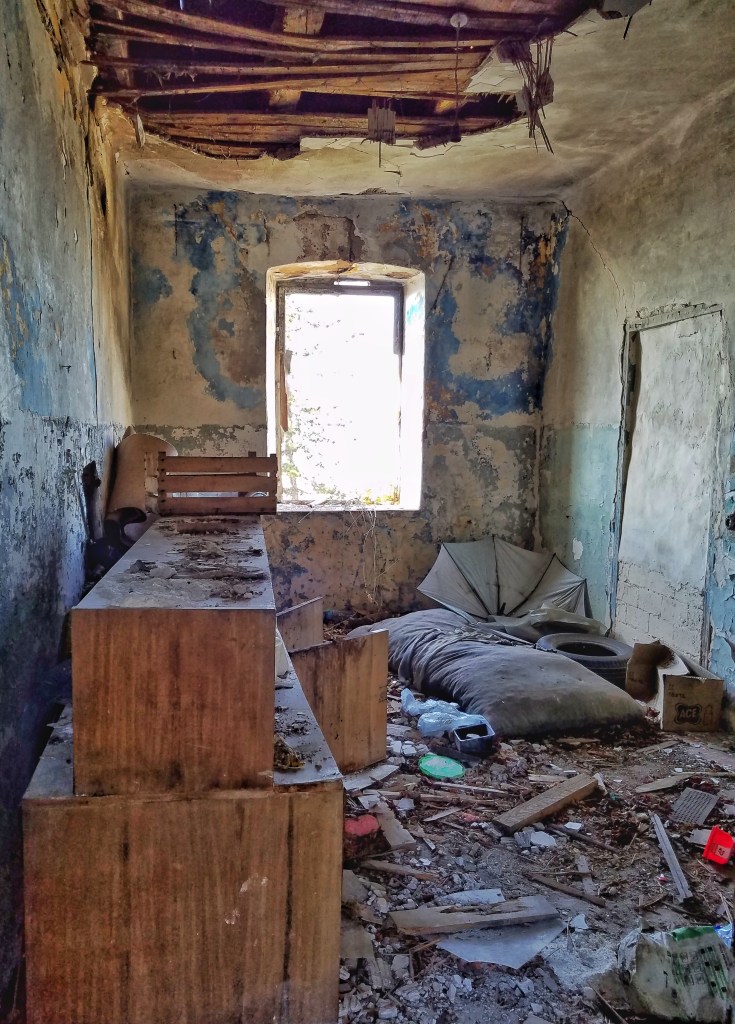 Just opposite us on the other side of the ridge we are treated to views over the city of Tivat, and beyond that, to the Adriatic Sea.  A bit further along the ridge we encounter the hulking Vrmac Fortress.  Built in the 1860s during the Austro-Hungarian empire,  it was abandoned and left to decay to it’s present state during the breakup of Yugoslavia.  To say it had a creepy vibe about it would be an understatement.  I’m sure there is a way inside, but neither of us had any interest in doing so.  It appears as a blemish on the otherwise pristine mountaintop – taunting the surrounding beauty with its defiant unsightliness. 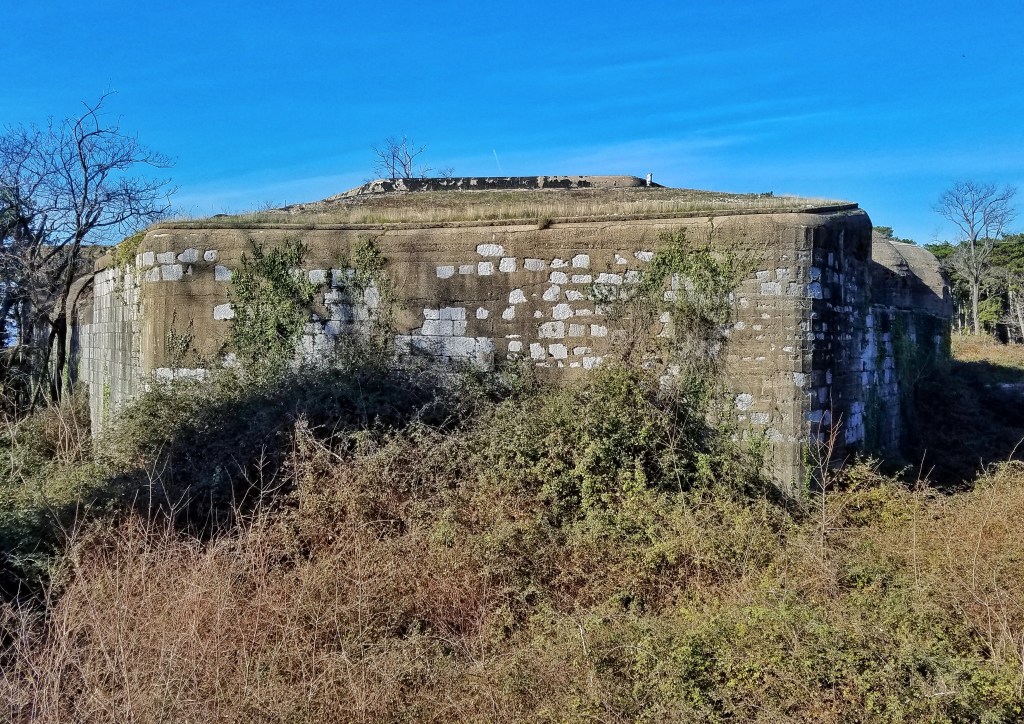 Despite its history, the fortress is underwhelming and doesn’t seem a fitting pay off to the effort put forth in making our way to the top of this ridge.  There has to be a reason this trail exists, and this fortress surely isn’t it.  We continue along, wandering our way through various paths through the trees, eventually happening upon a small ridge.  Below us lies the bay and the city of Kotor, and directly across is the city fortifications and ladder both in full view, snaking their way up the mountain. 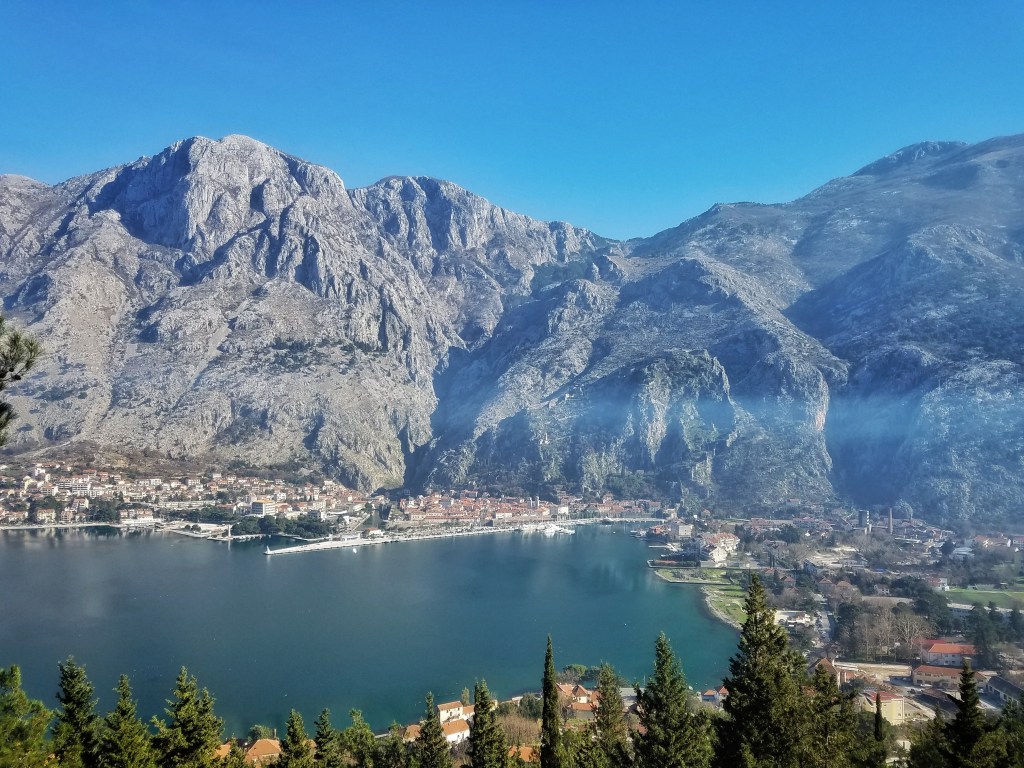 It gives us a good sense of where we had ventured the previous afternoon, and adds to the sense of accomplishment we felt having completed the trek.  It looks imposing from this angle.  An impossible feat, almost.  How did we make it up to the top of that ridge, with a seemingly minimal amount of effort over a long afternoon?  This is the perfect place to relax for a bit, and we do just that – finding a comfortable spot, legs hanging into the abyss.  We remark on the silence of the city.  Where is the cacophany one would expect from a sprawling town?  The silence is almost deafening, only briefly broken by the distant sound of a barking dog from somewhere far below.  “How can an entire town be more quiet than my class of grade 6 students?” Adam wonders aloud.

I’m taken with the hospitality and warmth of the people we encounter during our journey.  The host in Podgorica who spends half an hour telling us about his city and marking pins on our Google maps.  The stranger at the grocery store who offers us a ride in his car when we can’t find our apartment on arrival in Kotor.  The bus station attendant who argues on our behalf with the ticket agent to convince him to print our tickets for us.  In Montenegro we encounter generosity at every turn. 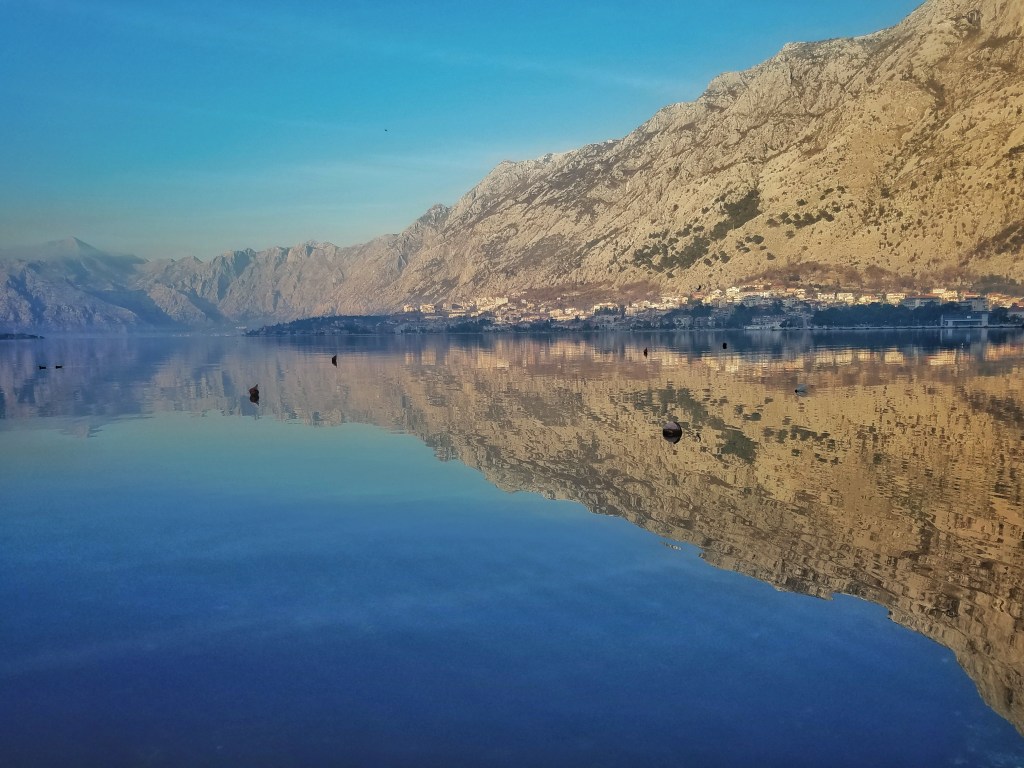 Though not a polished destination by any stretch of the imagination, Montenegro deserves it’s emerging popularity.  There’s hardly a country left in Europe that hasn’t given up some parts of its authenticity to make way for the crush of holiday revelers.  Montenegro seems like a country on the precipice, somewhere between undiscovered and being the place to be in the summer.  While it certainly feels that way in the short winter days of January, it just might have an entirely different feeling in the heat of the Balkan summer, when the cruise ships begin to pull into port and the sun warms the waters, drawing crowds to the sandy shores of its coastal villages.  For now, though, we have the place to ourselves. 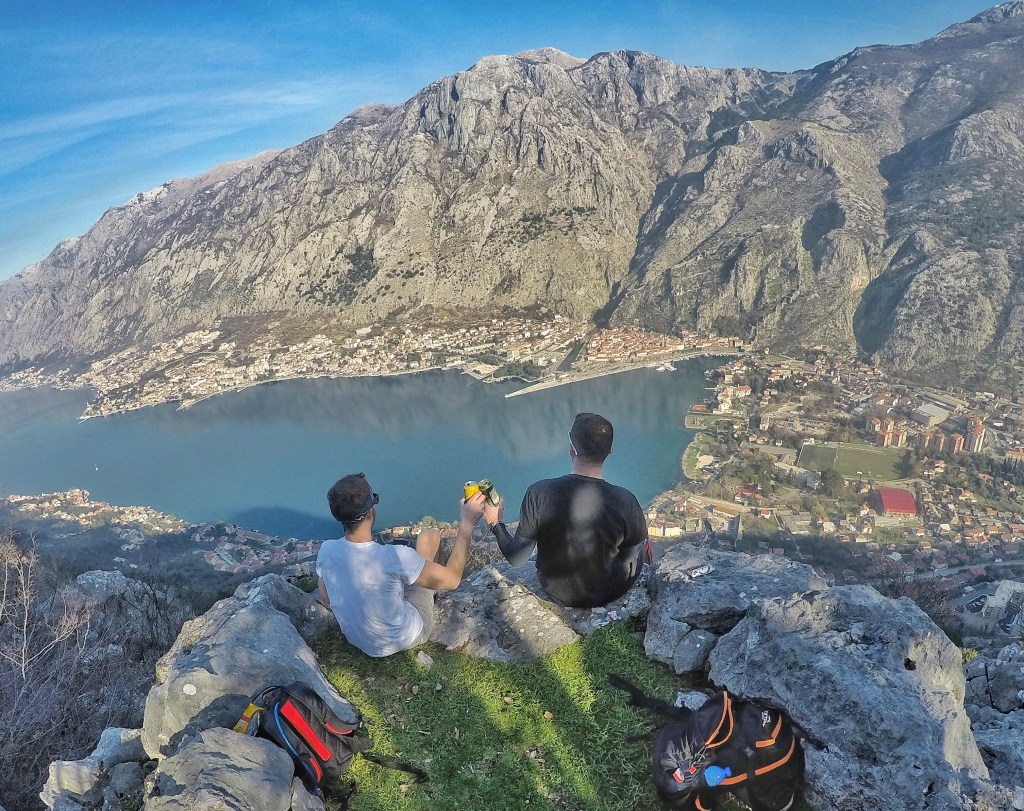 12 thoughts on “Cats, Rakija and Mountain Climbing: Adventures in Montenegro”