I am just one day back home from 10 days in Iceland and I’m still feeling the afterglow of the visit.  I was completely and utterly blown away by Iceland.  After months of planning, reading, and generally obsessing about the trip, my expectations were high.  They were exceeded.  Iceland is a land of contrasts.  During our 10 days, we encountered volcanoes, glaciers, geysers, waterfalls, mountains, fjords, lava fields, beaches, geothermally active regions, caves, hot pots, and a variety of animal life.  Especially sheep.  Lots and lots of sheep.

We arrived at Iceland’s international airport in Keflavík just before midnight to brilliant sunshine.  This was to be my first experience with Iceland’s “midnight sun”, which was a bit surreal at first, though we quickly became used to it.  We brought eye masks with us, but most of our lodging had great blackout curtains, which adequately darkened the rooms for sleeping.  The city of Keflavík is about a 45 minute drive from the capital of Reykjavík.  We stayed near the airport our first night rather than make the drive into the capital since it was so late to begin with.  Hotel Berg was our first lodging of the trip, and it was a very nice small hotel that was perfect for a quick overnight stay and jumping off point the following morning.

Before I describe our journey, a few observations and thoughts on Iceland:

The first few days of our trip was focused on south Iceland.  We rented a 4WD Suzuki Grand Vitara – self-driving is really the only way to properly experience Iceland.  There are so many random things to see as you drive from one place to the next that you wouldn’t be able to stop for and check out if you were doing the tour bus thing.  Plus, to me, arriving at various locations with hordes of other people is not really my idea of travel.

Our first stop of our first full day was at the Blue Lagoon.  The Blue Lagoon is a geothermally heated spa that was created by the runoff from a geothermal power plant built in the 1970s.  The heated water from the power plant pooled into the lava rocks surrounding it, and the silica rich waters eventually plugged the porous rocks, allowing the water to not simply seep back into the ground.  While very crowded, we quite enjoyed the experience.  In a few spots around the pool, there are big vats of white silica mud that you smear onto your face and body – while I’m not sure what the purpose is, something to do with exfoliation or pores, I’m sure, I smeared it on, because you can’t go to the blue lagoon and not do it. When you check in, you’re given a wristband which you can swipe to order drinks from the bar in the lagoon.  Nothing like soaking in the warm lagoon with a couple of Gull beers while a light drizzle fell on us.

From the lagoon, we set out for our first day of adventure along the southern coast.  It was amazing to me how quickly the landscape would change as we drove route 1 heading east.  You would be passing farm land with sheeps and horses, and suddenly you’re driving through the middle of a lava field.  Then, before you get used to that scenery, it’s changed to hills of thick green moss, followed by lunar landscapes, coastline, and so on.  Things were definitely not monotonous on this drive and it kept things interesting.  We were constantly being blown away by the grand scenery, and we came up with the acronym M.A.F. to describe the amazing landforms that presented themselves to us.  The M stands for “Majestic”, and I’ll leave the A and F to your imagination.  A correct usage of the word might be:  “That glacier is MAF!” or “That waterfall is the MAFfest thing I’ve ever seen!”, or more simply “Whoa….so MAF.”  Our first stop was at Seljalandsfoss, a MAF sight in and of itself! Seljalandsfoss is a waterfall that tumbles off a cliffside, which is quite beautiful, but the thing that makes it special is that you can walk behind the falls for amazing views.  We got completely blasted with the mist coming off of the crashing wall of water.  I was wearing a rain jacket, but didn’t think I’d need my rain pants.  Bad decision, as my pants soaked through within seconds of approaching it. From Seljalandsfoss, we headed on to find the old, hidden hot pot, called Seljavallalaug.  Seljavallalaug was built in the 1920s right up on the side of a mountain, where naturally hot water seeps from the rocks right into the pool, keeping it a comfortable swimming temperature year ’round.  We assumed it was a rather off-the-beaten-path kinda place, being that it was somewhat of a hike to get to it.  The rain was off and on as we pulled into the parking area at the start of the hike.  The valley on the hike to the pool was nothing less than spectacular, even in the rain. After about 30 minutes of walking through the valley, we arrived at the pool.  There were quite a few people already in the pool and even more just about to get in.  Iceland crowded. 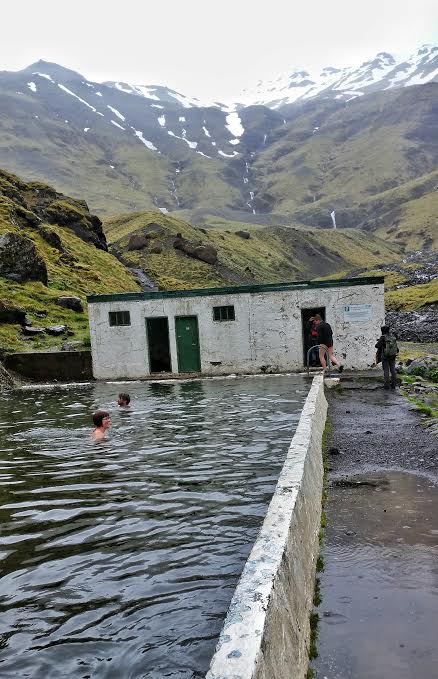 We decided not to get in as the rain was starting to come down a bit harder, and we were getting a bit hungry and wanted to head on to our final stop in the town of Vik, where we would be staying 2 nights at Icelandair Hotel Vik.  Upon arrival, we walked across the street to Ströndin, a nice restaurant where we had some pizza and beer.  From both here and our hotel room, we had fantastic views of Reynisdrangar, which are sea stacks just off the coast said to be some trolls that turned to stone for some reason or another.  This is a good time to point out that there are lots of trolls, elves, and hiddenfolk all over Iceland.  Ask anyone there, they’ll tell you! The following day we headed east to Jökulsárlón, which translates to “glacial lagoon”.  Here one of the tongues of the Vatnajökull glacier, Europe’s largest, reaches into a lagoon where large chunks frequently break off and drift out to sea.  We were taken aback with the size of the bergs floating around the lagoon.  Their blue color comes from a lack of air bubbles within, since the ice is so compacted on the glacier. We took an amphibious boat out into the lagoon where we were able to get a bit closer to the ice, and even got to eat a piece of one the icebergs. From the lagoon, the icebergs flow out to sea, where many of them then wash up on a black sand beach right across the street.  We went to the section of beach to the right side of the lagoon, where everyone else went to the left, so we had the entire area to ourselves.  It was fun playing around with the ice and watching the waves crash on the big chunks sitting on the beach.  Grabbed some black sand samples here for my classroom, because one never stops being a science teacher! 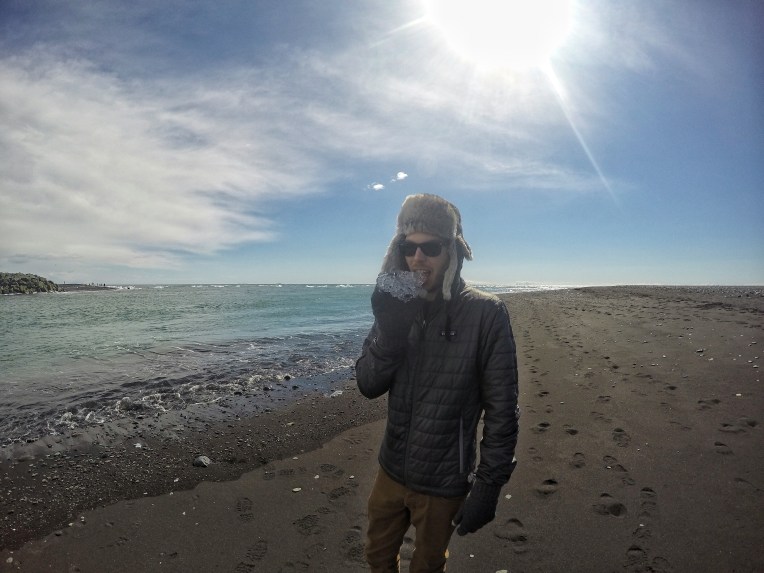 Just a few kilometers west of Jökulsárlón was another glacial lagoon called Fjallsárlón.  We found it to be just as beautiful as Jökulsárlón, but with nobody around.  We were the only 2 on the beach for quite some time, able to take in the quiet and views, uninterrupted. Heading west again from Fjallsárlón, we reached Skaftafell National Park, and took the hike to Svartifoss, a basalt column waterfall.  It really is a sight to behold, surrounded by the hexagonal basalt columns.  The hike to it took about a hour, mostly uphill. Along the hike we also came across Hundafoss, plunging into the canyon far below us.  Made the vertigo kick in staring over the edge! Click here for part 2, where we travel to Southwest Iceland

5 thoughts on “Iceland, A Land of Diversity, Part 1: South”