Prague is undeniably one of the most beautiful cities in all of Europe.  Largely spared the destruction that brought about the demise of baroque architectural marvels in other major European cities during WWII, Prague was left intact and therefore remains in all it’s ornate and splendid glory, preserved for all to enjoy.

While we didn’t get to see every part of the city during our 4 days, we did manage to see and experience a good bit of what makes Prague in winter such a charming destination.

With it being the Christmas season during our visit, we were fortunate enough to have the added benefit of the charming Christmas markets that set up shop across the city each December.  There are no shortage of them peppered throughout the city, with the largest by far being located in the Old Town Square, which was packed shoulder to shoulder with holiday revelers throughout our time there. 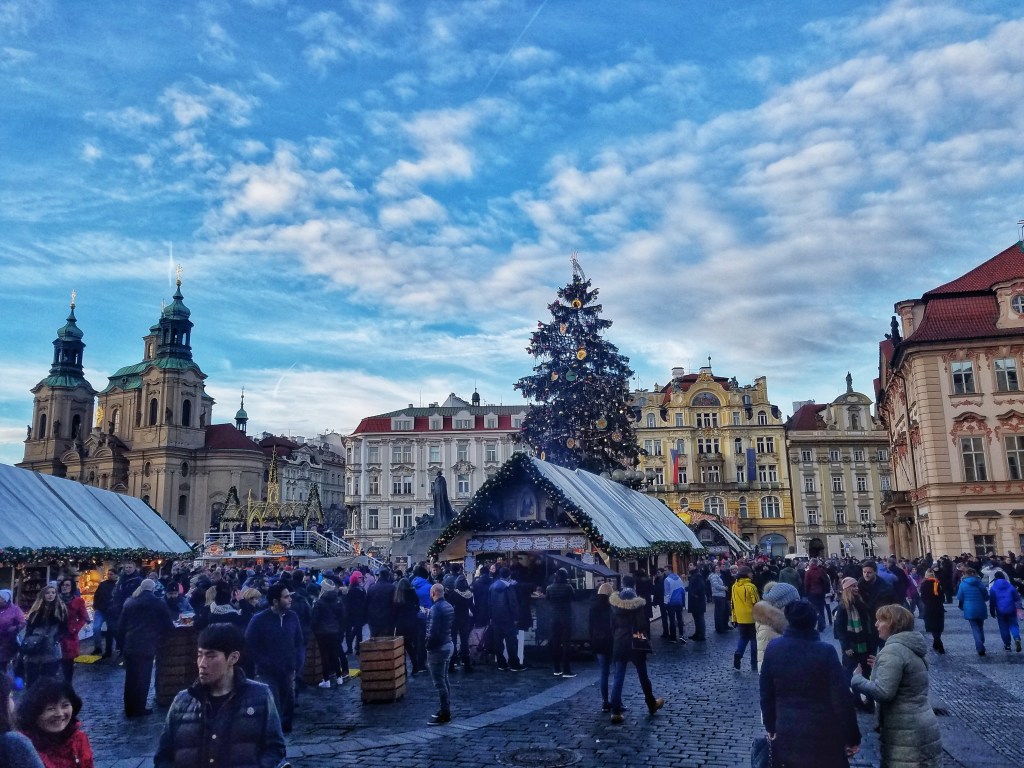 One of my favorite things about the markets here were the smells.  All manners of delicious foods were being cooked in the various stalls, creating a delightful cacophony of aromas that induce within you warm holiday feelings.  Try the mulled wine (known locally as svařené víno) and the Chimney Cakes, which are large swirled pastries which are often coated with cinnamon and sugar and can be filled with chocolate or ice cream.  I also particularly enjoyed the roasted chestnuts, which are a staple at the markets across most of Europe. 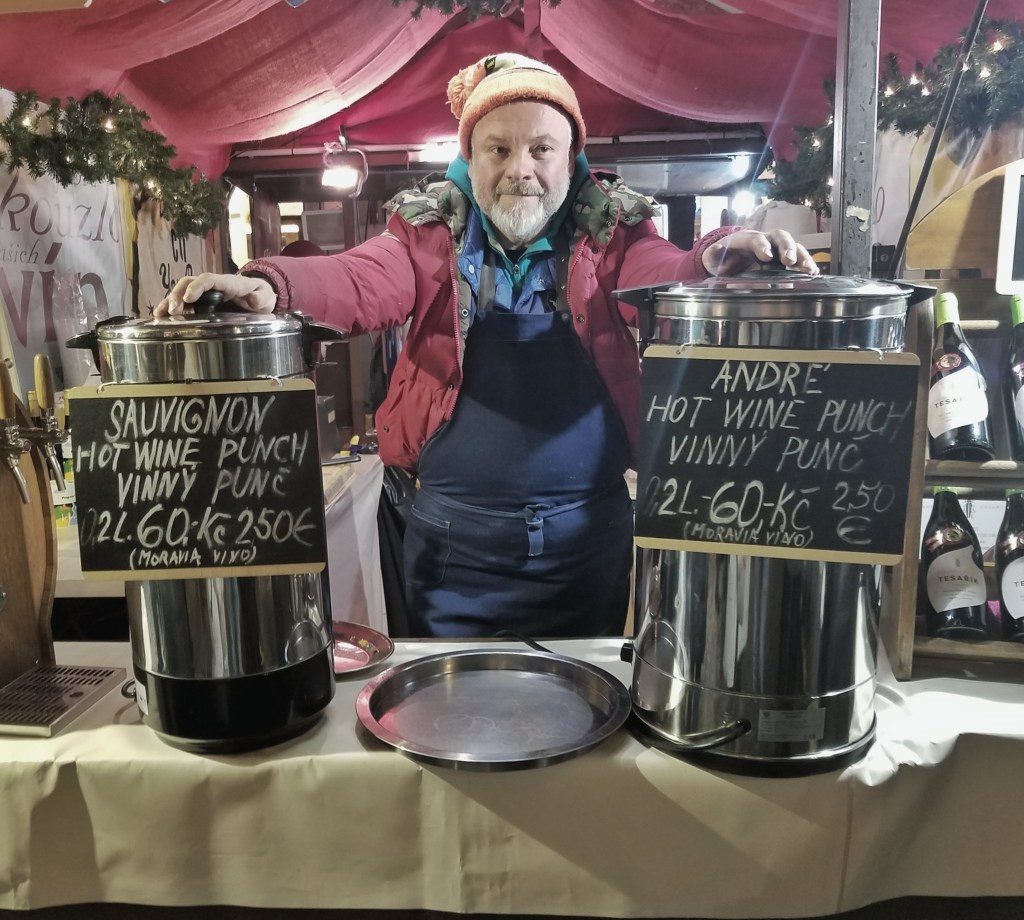 Be sure and pay the small fee to climb to the top of the Old Town Hall Tower to get a spectacular panoramic view of the city, including a commanding overhead view of the market below.  Also located at the bottom of the tower is the famed Astronomical Clock.  Every hour, massive crowds of people gather at its base eyes and phones craned skyward to witness some little wooden figures momentarily pop out of a small door above the clock.  If you’re already in the area at the top of the hour, have a look, but don’t go out of your way, we found it a bit underwhelming.

The other Christmas markets of note within the city are located in the massive Wenceslas Square, and a smaller one in the shadow of the Prague castle.

Right outside of the city, by a direct train journey of just over an hour lies the small town of Kutna Hora.  On first glance, the city appears unremarkable – after arriving at the station you’ll find row after row of blocky apartment complexes.  Despite it’s rather mundane outward appearance, however, the town is host to a World UNESCO Heritage Site, called the Sedlec Ossuary, sometimes better known as The Bone Church. 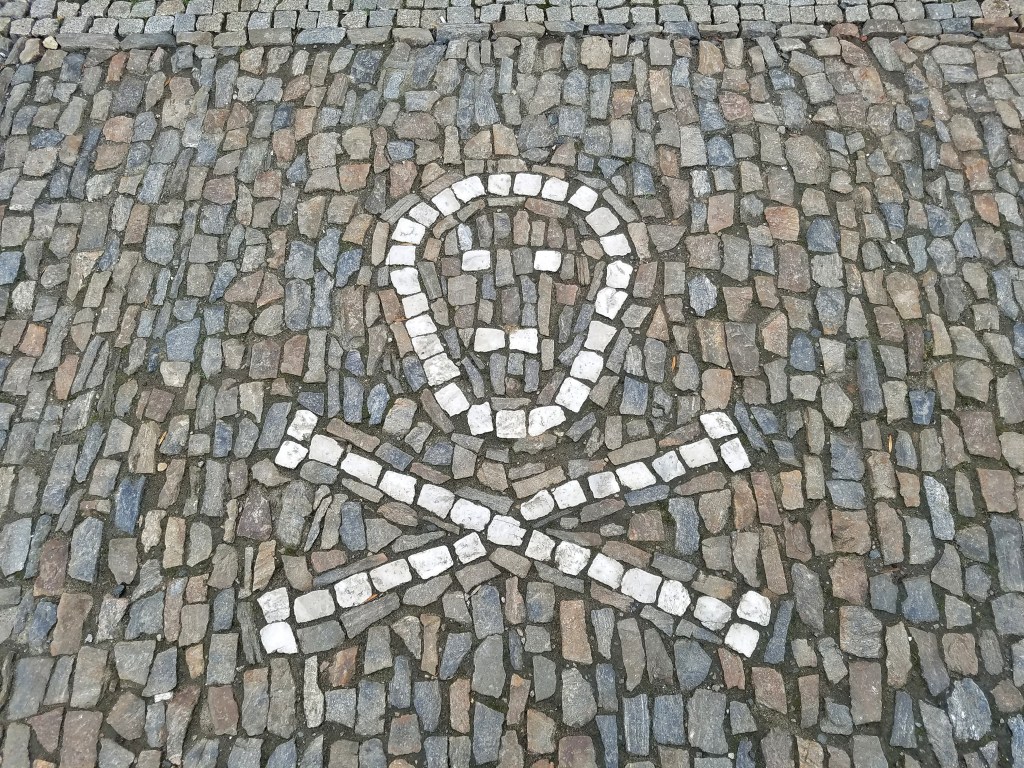 The plot began as a cemetery in the 1200s, which rapidly expanded in size during the Black Death of the 14th century.  Some years later, the church was constructed on the site of the cemetery, and the bones that were exhumed during construction of the church were moved into the basement and stored for hundreds of years.  During a renovation in the 1800s, a priest decided to make use of the huge amount of bones stored in the ossuary, resulting in the macabre display that today attracts visitors from around the world.  In all, it is estimated that the church contains the remains of between 40 and 70 thousand deceased humans. 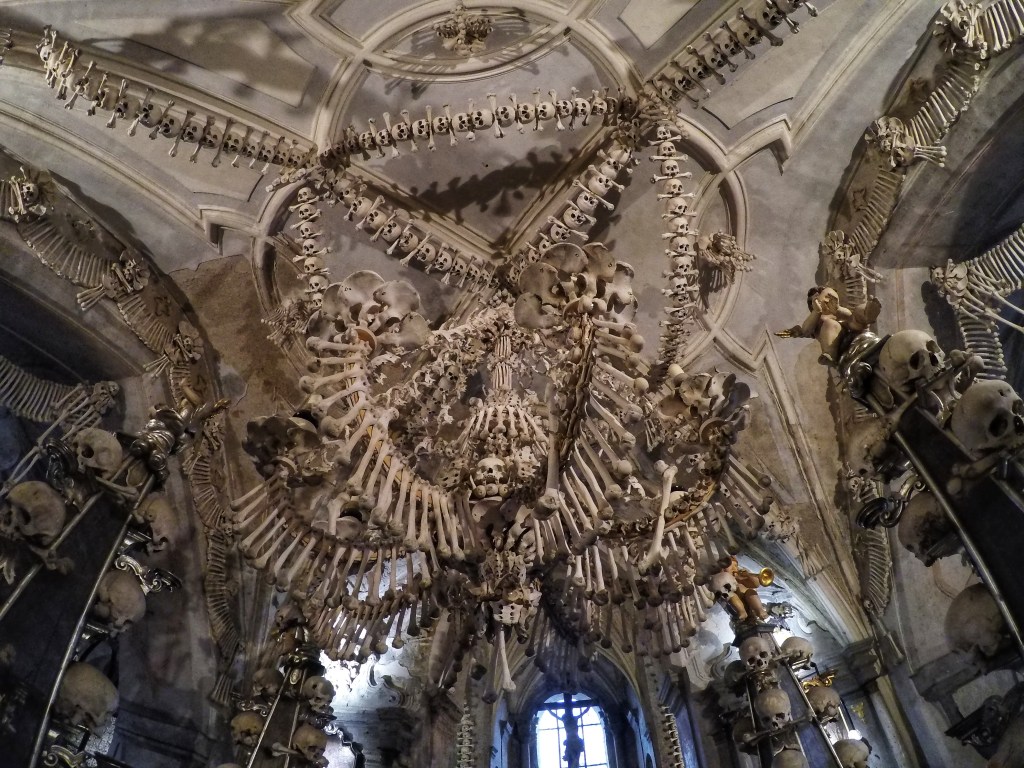 Some of the displays are quite elaborate, and lend the whole place quite an eery undertone as you explore the chapel, walking next to piles of skulls and chandeliers made of skeletal remains. 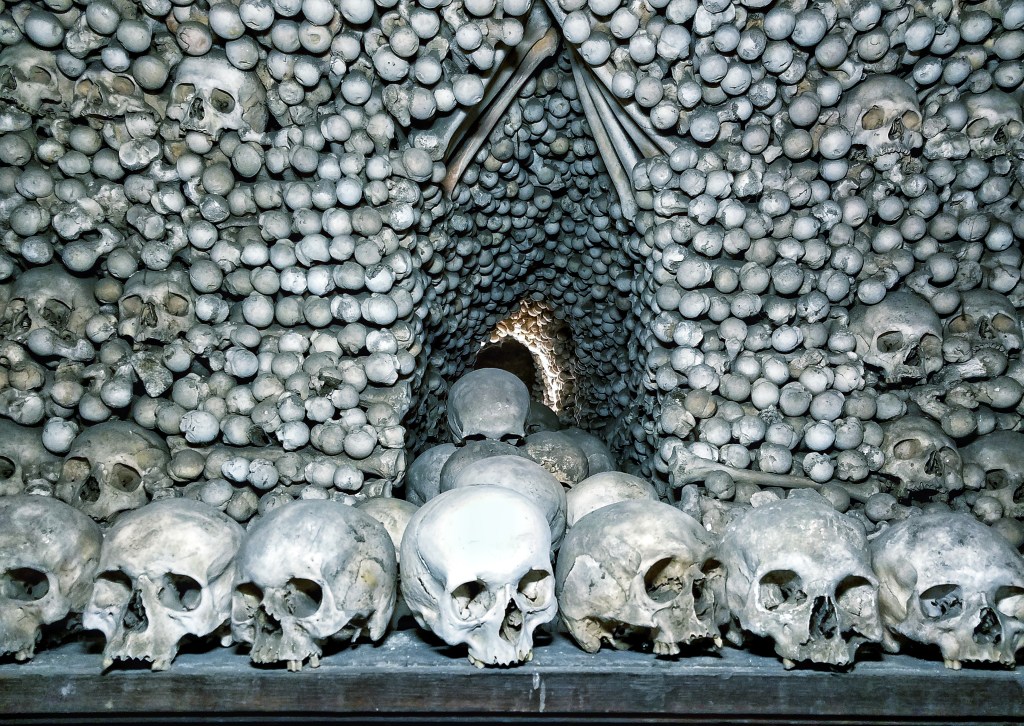 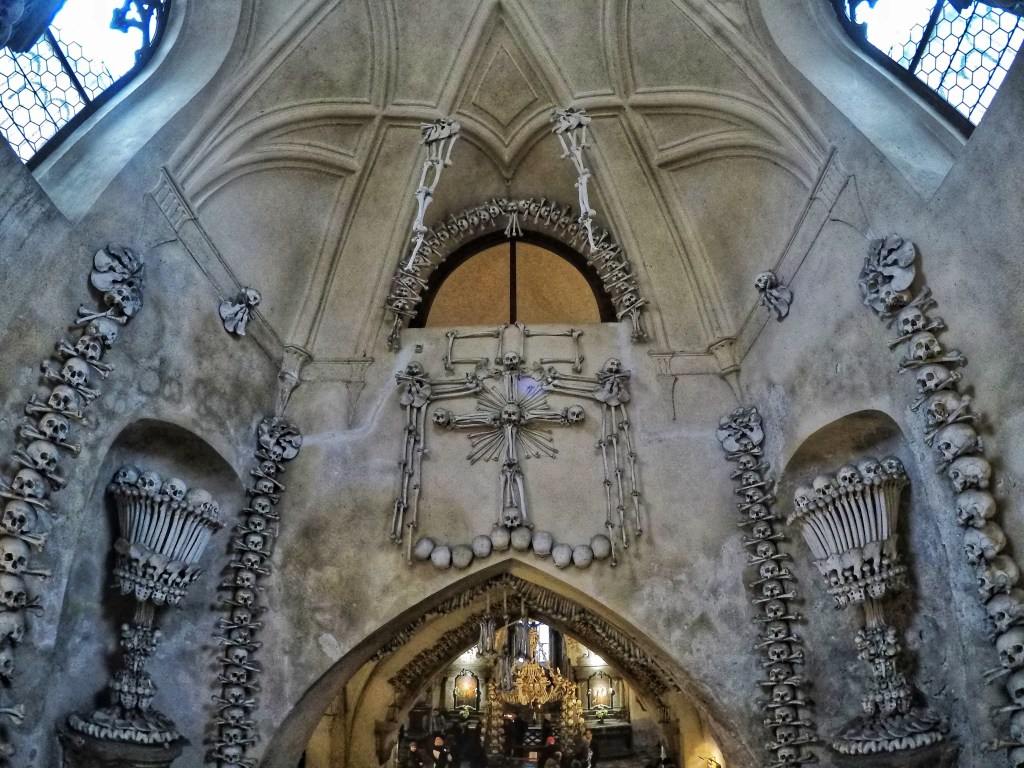 Note that the Sedlec Ossuary is open every day except Christmas Eve, and if you purchase your ticket at the church, you must pay with cash.  If you don’t have cash on hand, it’s possible to purchase a ticket with a credit card at the tourist information office just a few minutes walk down the road.

If the thought of spending a few hours browsing through piles of books gets you excited, definitely carve out some time to browse the multiple levels of the charming Shakespeare and Sons bookstore.  Located just a block away from the Franz Kafka museum, Shakespeare and Sons is a mostly English language bookstore that offers both new and used books, along with a charming atmosphere in which to browse and sit to read for a little while. 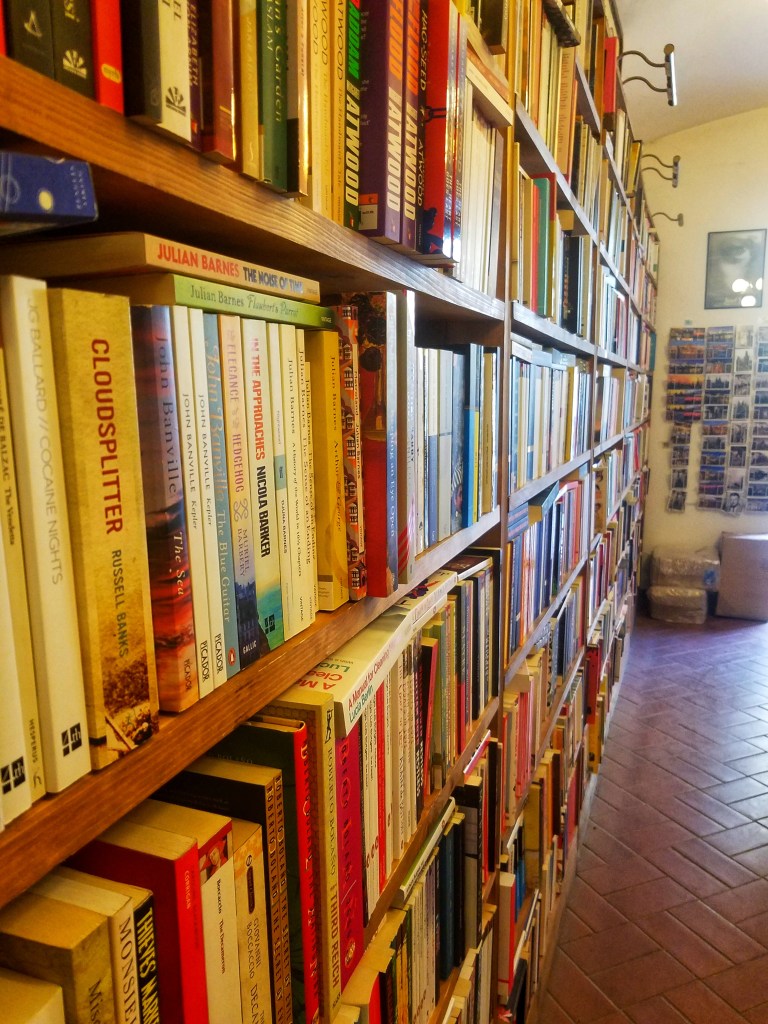 It’s quite rare to find such a large collection of English language literature for sale in Europe, so it was quite a welcome treat for me, who can spend hours browsing in a good bookstore.  Come for the book selection, stick around for the vibes. 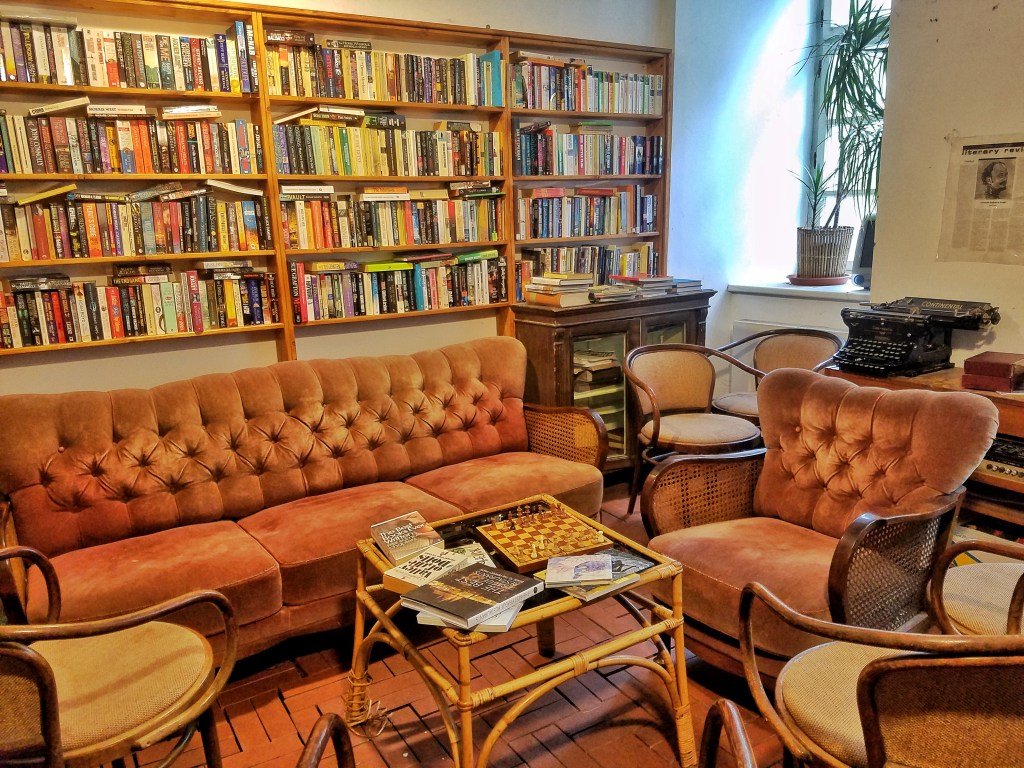 Whereas most European cities have their charming Old Town sections, usually relatively compact in size and which often look quite different from the rest of the city, Prague is essentially one giant old town, attractive and charismatic around every corner as far as your feet will carry you.  We spent most of our 4 days in the city walking in the Old Town District, also referred to as Prague 1 (the city is divided into 9 sections) which felt adequate for exploration, but we easily could have added a few more days to see everything else other parts of the city have to offer. 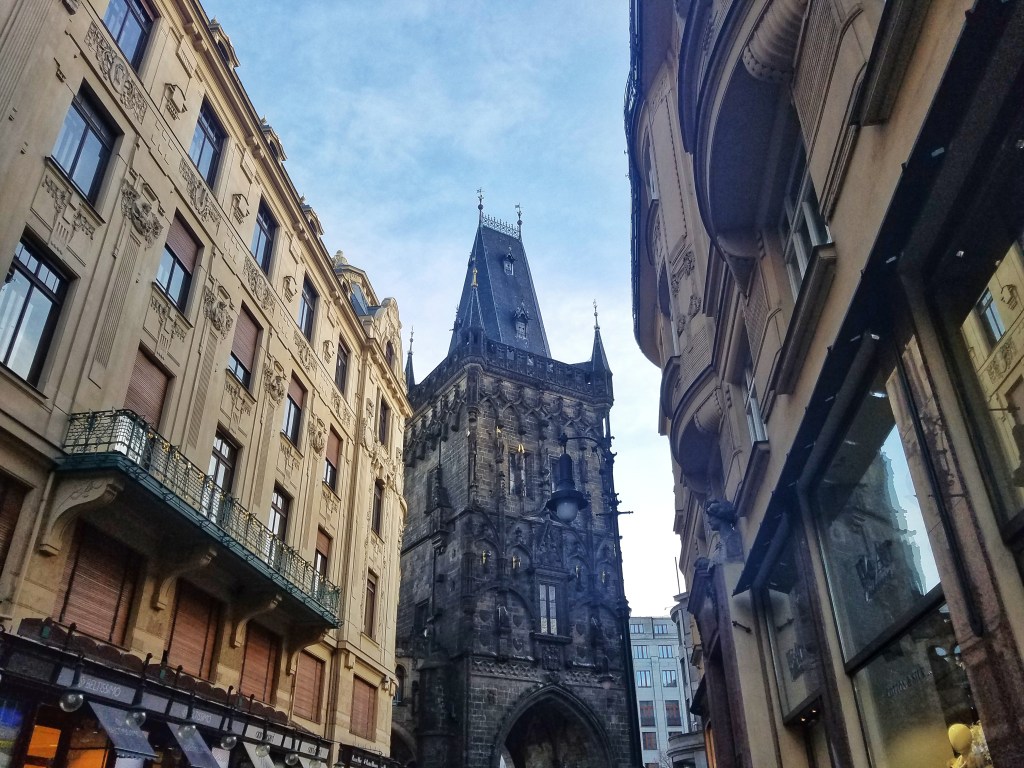 Everywhere you look, the charm is laid on thick, with even the most mundane back alleys being lined with gilded and opulent architectural flourishes.  Most mornings we would just set about walking in a random direction and seeing what we might encounter.  It’s hard to make a wrong turn as you wander the streets, with each new step offering another beautiful statue, building, or tower to gaze upon. 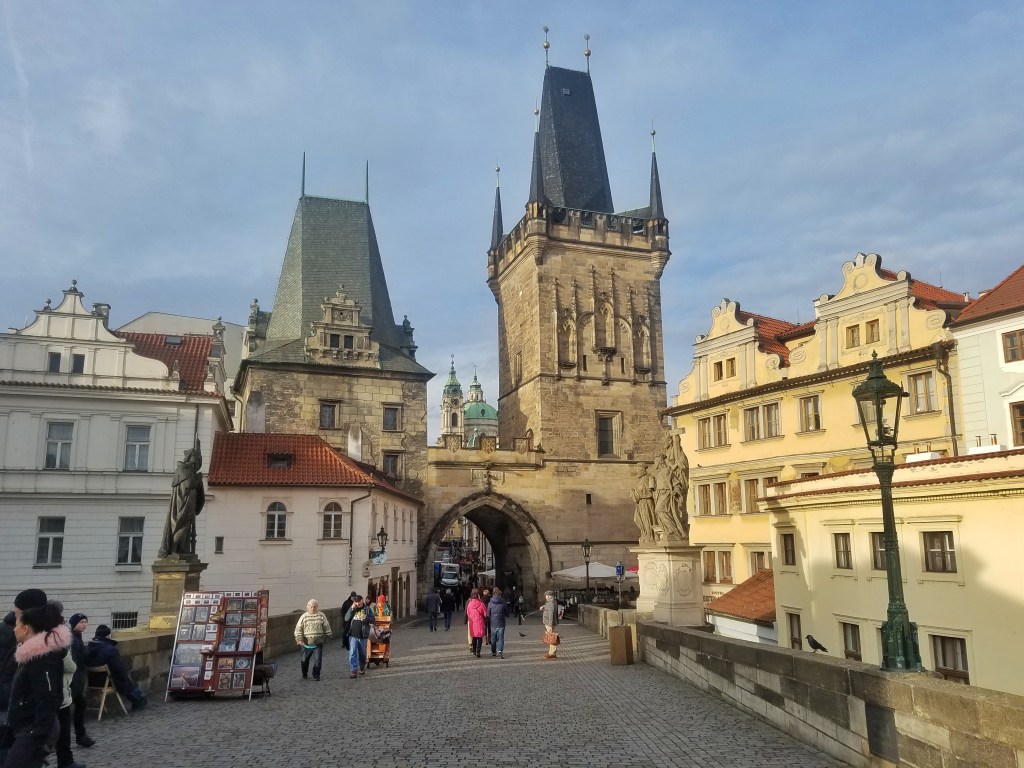 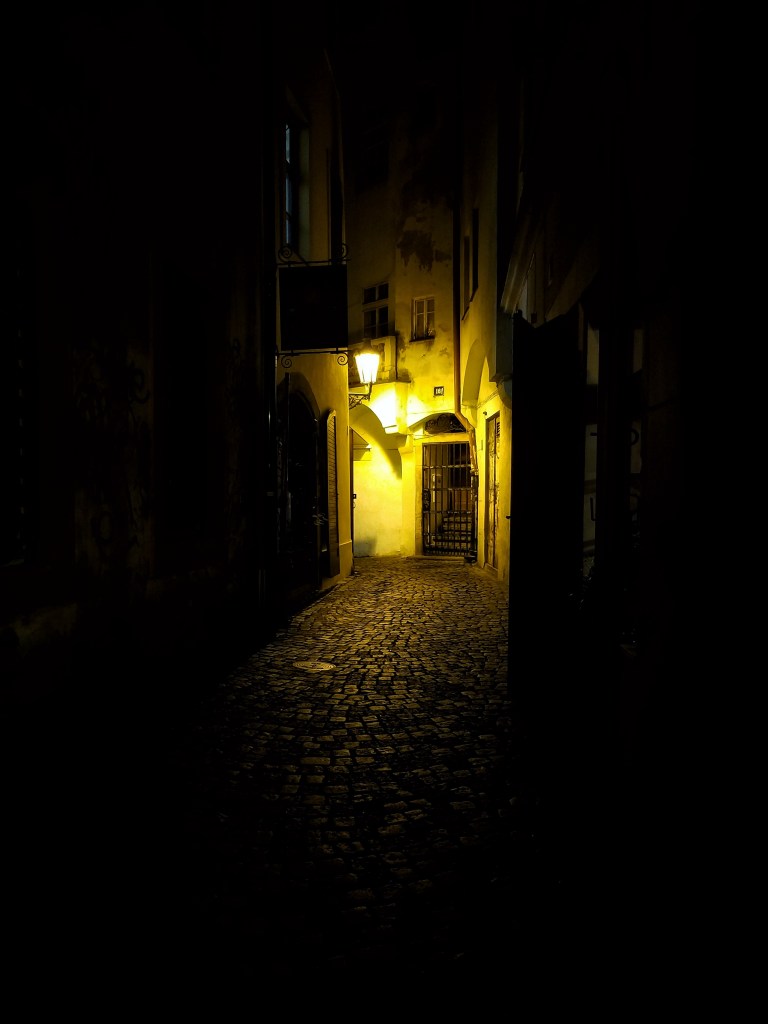 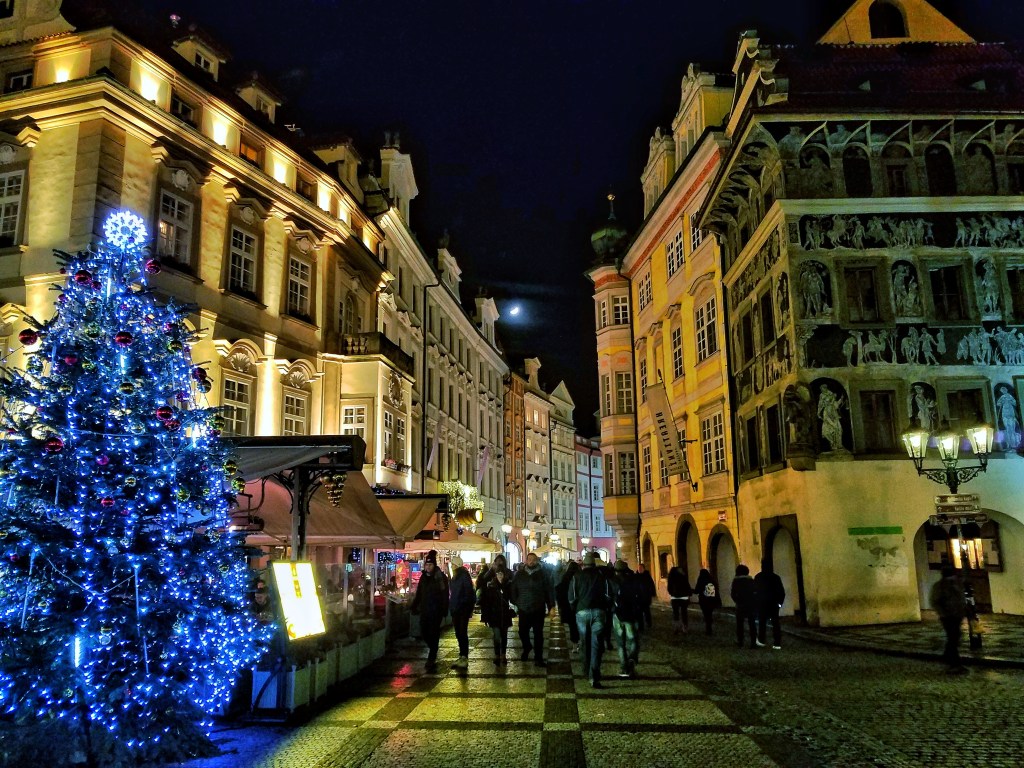 The old town is spread out onto both sides of the Vltava river, with the east side being mostly flat, and the west side dotted with rolling hills, or “little mountains” as one local referred to them.  Some things to not miss as you walk about the town: 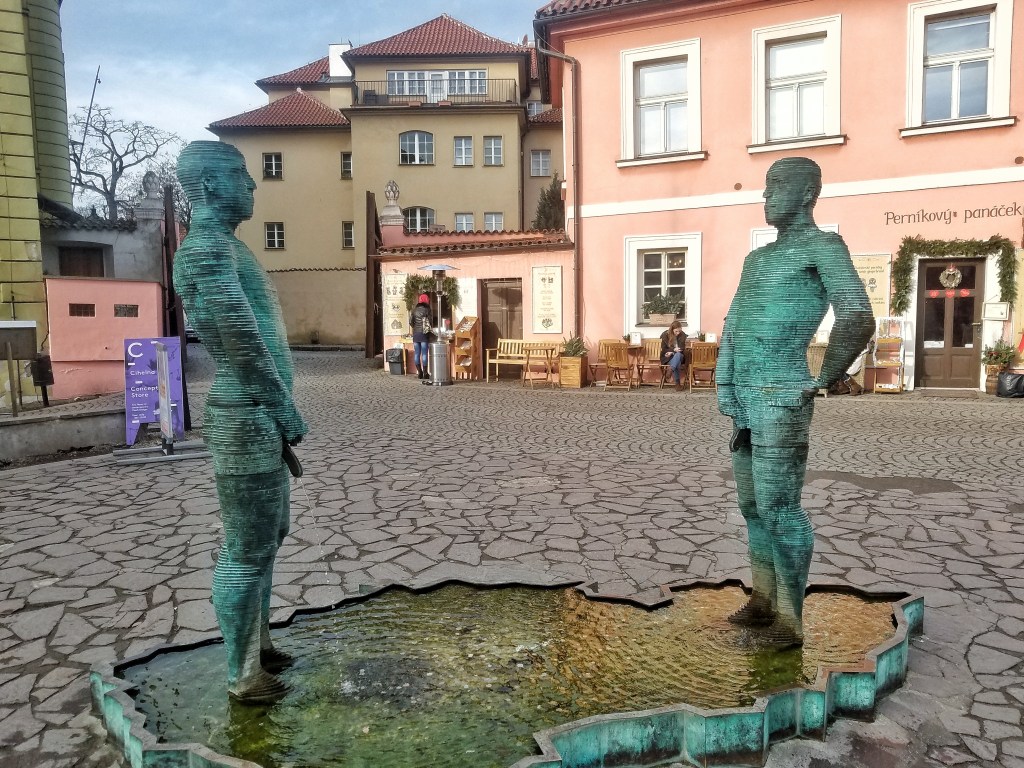 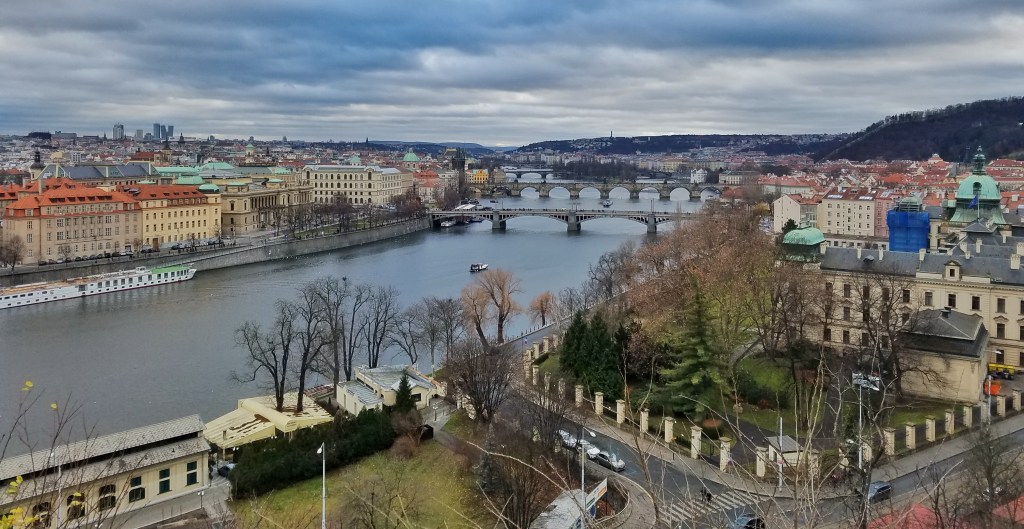 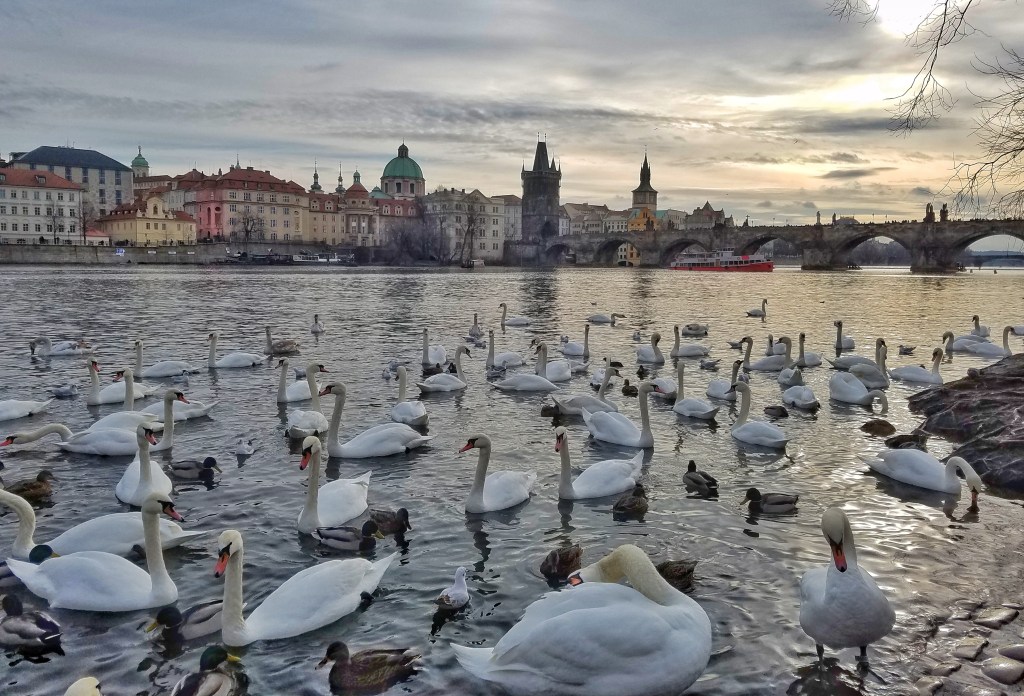 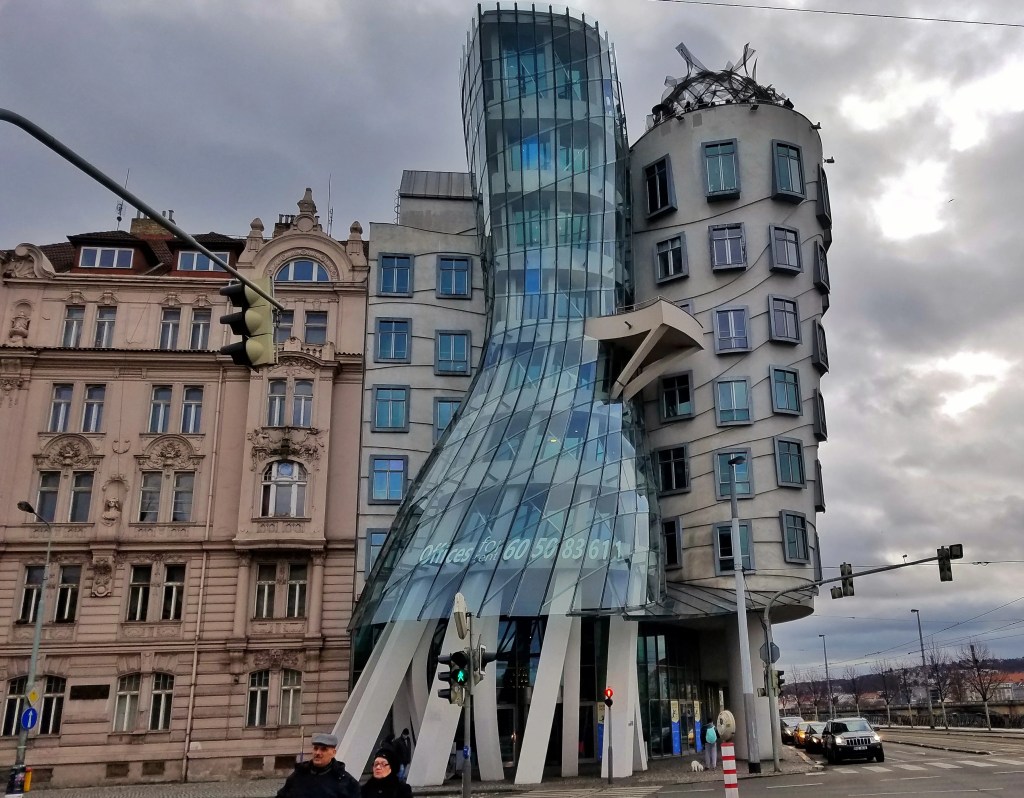 Have a pilsner at U Pinkasu

A trip to Prague wouldn’t be complete without imbibing on its most famous contribution to humanity, the pilsner beer.  U Pinkasu has been in operation since the mid 1800s, and is credited with being the first establishment in the world to serve Pilsner.  The atmosphere is charming, the beer is cheap and plentiful and the service is warm and hospitable.  Located just off Wenceslas Square, U Pinkasu is definitely worth a stop for a mug or 6 of Pilsner.

I can highly recommend the AirBNB we stayed in, which can be found here.  The location was impeccable – located in the heart of the old town, steps away from Wenceslas and Old Town Squares.  The apartment itself was amazing, and the hosts were very helpful in providing us with many recommendations in the immediate area. 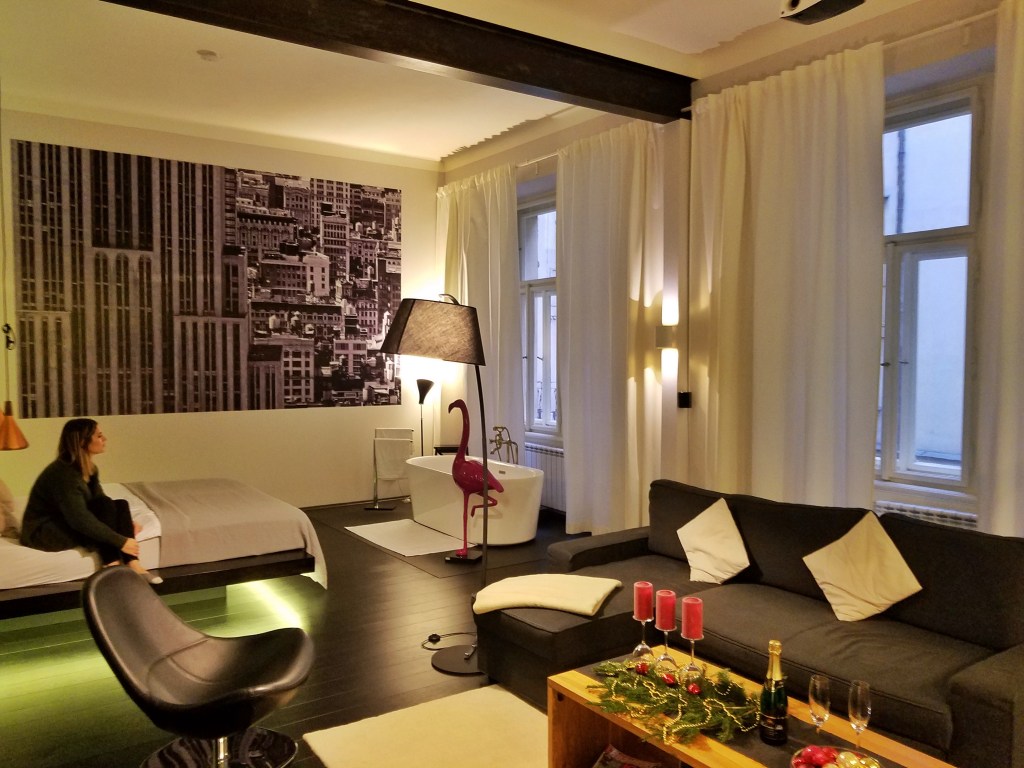 One thought on “Visiting Prague at Christmas”