Nicaragua is a country with much to offer.

Being the largest country in Central America, there are a staggering amount of sights and activities to command your attention.  With just a few days in the country, Christina and I had to be very picky about the things we wanted to accomplish while on the ground there.  We certainly wanted plenty of time to laze about, soaking in the sun and glistening waters of the Pacific, but also wanted a taste of the culture of the country; Nicaragua is much more than its beaches, and we wanted to see what its most visited city, Granada, was all about.

Finding yourself in the country for a short amount of time, as we were, it’s easy to feel overwhelmed with the vast amount of sights to see and activities to embark upon.  Most visitors to the country tend to find themselves in one of three places:  León, San Juan del Sur, or Granada.  León is the university town just north of Managua, famous for its colonial churches and cathedrals, and the nearby Cerro Negro volcano, on which thrill seekers trudge to the top and sled down on wooden boards at maniacally high speeds.  San Juan del Sur is the sleepy beachside town down south that serves as the jumping off point for some prime surfing, and a mecca of beachside bars and laid back resorts.  Granada is the stunner, with its brightly colored architecture and picturesque lakeside setting.

The bulk of our time was spent at Morgan’s Rock Hacienda and Ecolodge, described in a previous post.  For our second to last day in the country, we hired a private guide through the tour company Nicaragua Escapade, who met us at the resort early on a Monday morning to take us on a day long trip into Granada and its surroundings.

As we drove down the main throughway that runs from San Juan del Sur en route to our first stop of the day, our guide Gustavo spoke candidly about his country, both past and present.  We learned much from him about Nicaragua, from the turbulent past to the controversial current president, Robert Ortega.  At one point during the drive, we watched, fascinated, from the backseat as a gentleman climbed from within a school bus, traveling around 40 miles per hour, onto the roof to retrieve something from his luggage. Once he had acquired the item, he nonchalantly climbed back down from the roof, opened the emergency door with one hand, holding on with the other, and stepped back inside.

We made a quick stop at the shoreline of Lake Nicaragua, for another look at Isla de Ometepe, the volcanic islands in the middle of the lake.  And while today the islands were not visible due to cloud cover, I feel that I got the best shot of our entire trip here, thanks to the perfect placement of a colorful boat, windmills, the lake, and a passing bird.  Eat your heart out, Ansel Adams. 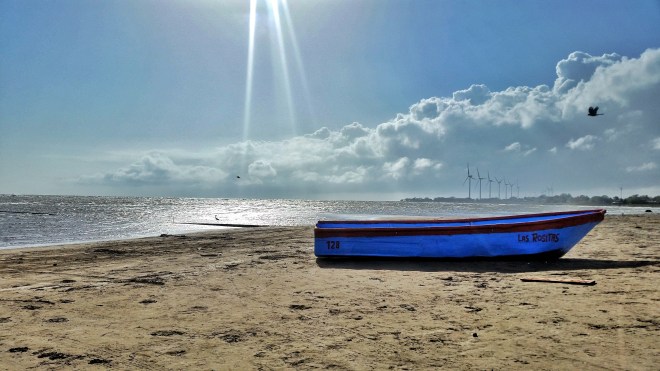 Our next stop was San Juan de Oriente, a town built on pottery.  Literally.

This small village sits upon a layer of clay rich soil, ideal for use in crafting pottery, that was deposited here by a volcanic eruption in ancient times. Since discovering the clay-rich soil, the residents here have been making their living by creating ornate ceramics for hundreds of years. Today, San Juan de Oriente is known as an Artisan Village, with many families selling their intricately crafted wares.

Driving through the streets of the village, we gazed upon the passing scenes of traditional Nicaraguan life: stray dogs napped on sidewalks while school children in their tidy uniforms strolled by. A bicycle passed nearby with a young husband at the helm, his wife perched precariously upon the handlebars with their baby swaddled in her arms; bags of groceries securely strapped to the back.  A young man crossed the street in front of us, wielding a large machete, presumably on lunch break from his work on a farm.

We arrived at the home of one of the local artisans to witness a demonstration of just how these beautiful pieces of pottery are crafted.  A couple of chairs were brought out and we were motioned to take a seat.  The teenaged son of the family sat at his table, began kicking the wooden wheel at his feet to get the turnstile spinning, and began to mold a very impressive vase from the raw clay.  Of course, after his masterful demonstration, I had to give it a try.  While it started off rather promising, things quickly fell apart and the finished product left much to be desired.

Not far from San Juan de Oriente, was our next destination, the small village of Catarina.  Catarina is most famous for its commanding view of the Laguna de Apoyo, a mind-bogglingly massive volcanic caldera, blasted out of the earth thousands of years ago in a huge eruption.  Over the millennia, the crater has filled with rain water, resulting in a stunning blue lake surrounded by jungle on all sides. 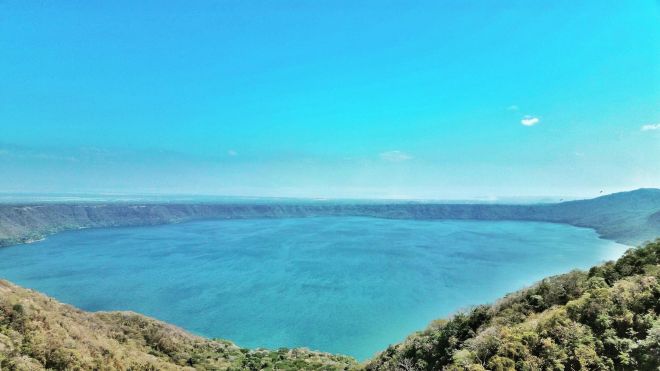 Just a town or two away from Catarina is Masaya, a popular destination due to the active volcano from which the town is named – Volcán Masaya, which continually belches sulfurous steam from its crater.  Due to a sudden increase in seismic and volcanic activity it was closed to visitors for safety reasons until further notice.  While we were hoping to get a glimpse of the inner workings of a live volcano from its rim, we instead stopped into the Mercado de Masaya, a popular arts and crafts market that attracts visitors from all over the world.

I was very intrigued with the unusual items for sale throughout the stalls.  If you’re looking for the quintessential souvenir to bring home from Nicaragua, you can’t go wrong with a hand-woven hammock, probably the most commonly sold good in markets of this type.  I had my eye on some very different souvenirs once we began wandering the rows of quirky stalls, however.  One of the first displays I saw was a wall of macabre and disturbing masks staring down on me. 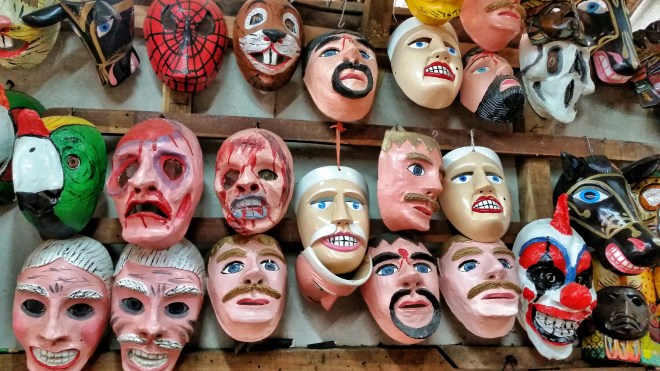 These were found in virtually every shop we wandered into, and our guide explained that they are used in elaborate street plays called El Güegüense, performed every January during the Feast of San Sebastián.  The plays are satirical comedies, that dramatize the interaction of early Spanish conquistadors with the Native Americans of the country.  The performances are filled with music, drums, and dancing, and are much loved and well known throughout the country.  I desperately wanted one of those masks.

A large and colorful mural occupied an entire wall of the mercado, and depicts one of the plays in action.  I loved the details, including the drunken reveler vomiting into the gutter. See if you can spot him! 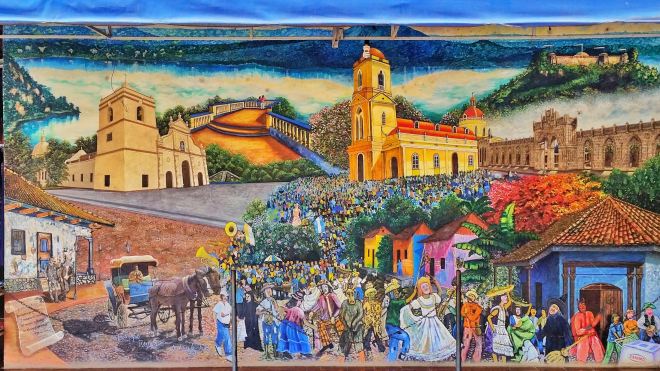 The other items for sale throughout the mercado that caught my attention were the hundreds of paintings depicting people sitting upon toilets, pants bunched around their ankles.  I chuckled at the first set of the paintings that I saw, when Gustavo mentioned to me that these are quite common here.  He explained how he’s noticed the evolution of the paintings over the years, where once they depicted the subject reading a newspaper as they did their business, the newspapers have been replaced with iPads and smart phones in more recent paintings.  I was particularly drawn to this fellow, who now hangs proudly in my own bathroom at home. 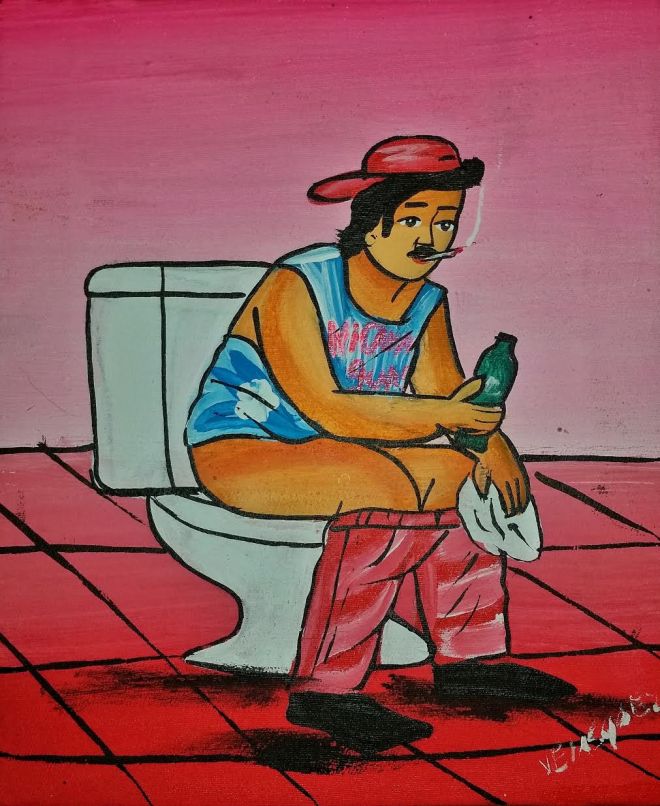 Finishing at the markets, we made our way to our ultimate destination, the charming city of Granada.  A full morning of exploration led to quite an appetite and a need for a beer, and so our first order of business was lunch.  Upon learning that we were vegetarianos, Gustavo highly recommended the Garden Café, a charming restaurant in which you have the option of dining in the library or garden.  We chose the library and were taken with the elaborate origami display of paper cranes hanging from the ceiling, an explosion of vibrant colors to accompany our meal. 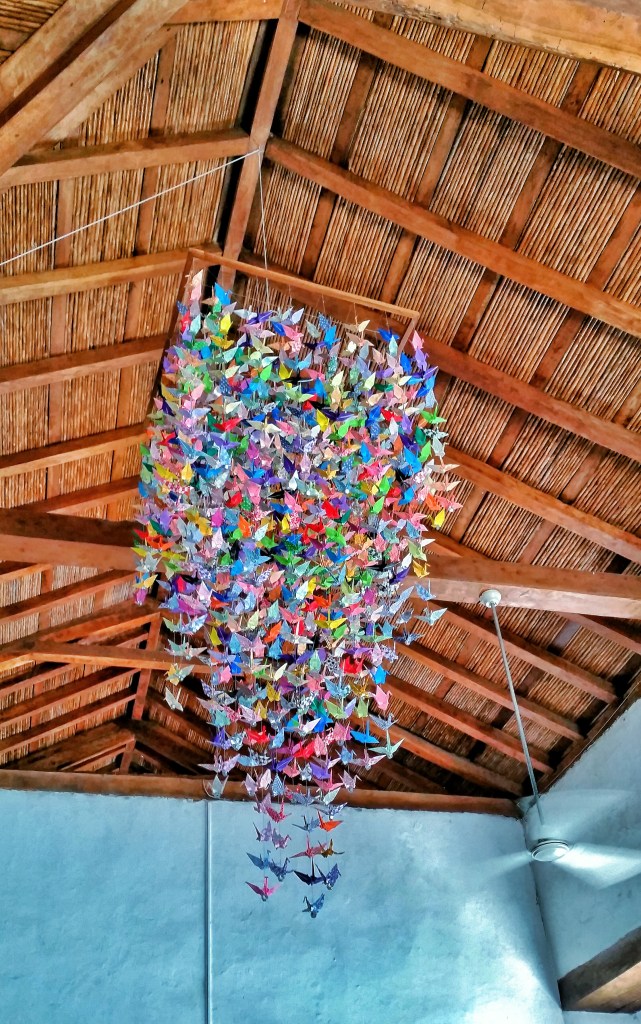 One quirk of the country, worth mentioning here, was how people were interested in watching us taste foods, to gauge our reaction to it.  On various occasions throughout our time here, after having our meal delivered, the waiter would ask:  “May I see you try it?”  We would oblige them each time, taking a bite and giving them our approval, much to their extreme delight.  The first instance of this we found to be a bit strange, but as it happened time and again, we realized it was quite common no matter where we found ourselves.

The Garden Café was a great option for vegetarians and meat eaters alike, with very fresh ingredients and a diverse menu.  Our meal of 2 entrees, an appetizer, and a couple of beers for each of us only cost us about $20 USD.

Our next stop took us into the cemetery, in which we learned a lot more about the history of the country, and some of the turmoil of the recent past that claimed so many young lives. 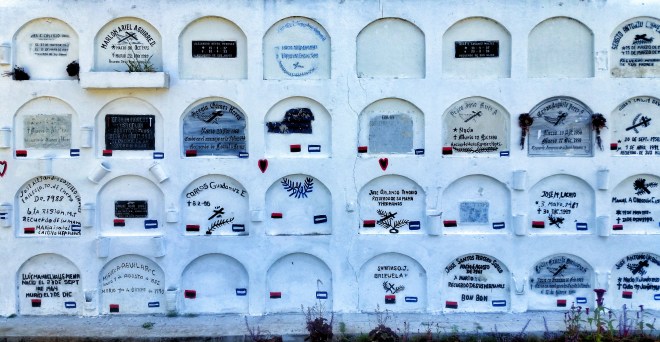 The above graves were all dated in the years of 1986 and 1987, and were all young teenagers, many of them unwilling casualties of the revolution.  We learned how many fighters were essentially pulled from their families and forced into the bloody battles.

The rest of the cemetery was very ornate and a bit reminiscent of the above-ground graves of New Orleans, Louisiana. 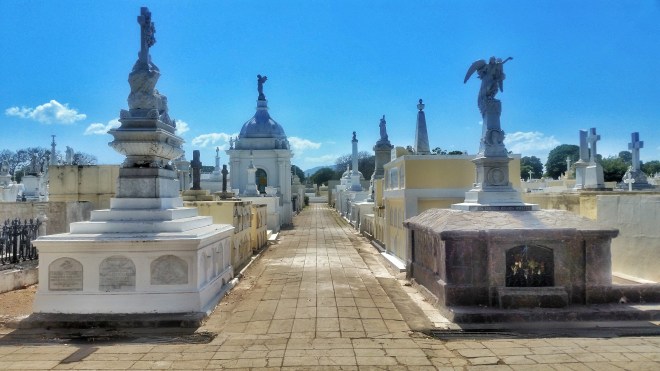 After leaving the cemetery, it’s a short walk to Parqué Centrál, the charming tree-lined center of town, dominated by the bright yellow Catedrál de Granada. 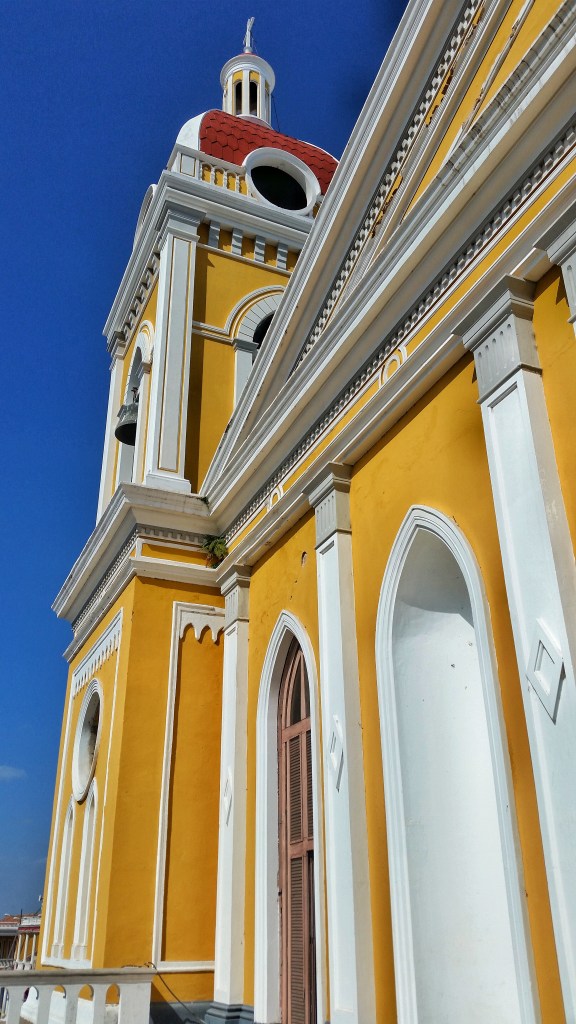 We took a walk through the beautifully painted cathedral, and walked the narrow stairs to the bell tower to take in a sprawling view of Parqué Centrál below us.  It was a great way to get our bearings on the layout of the city. 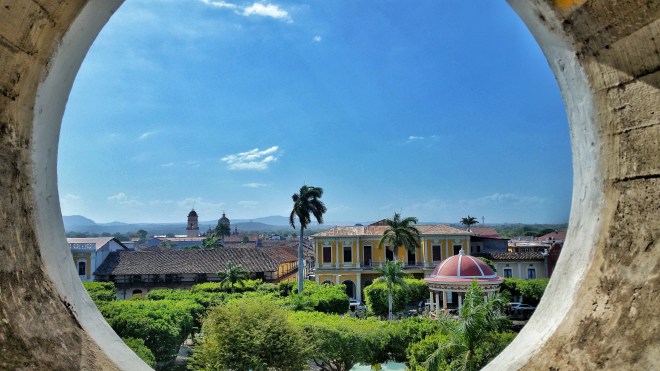 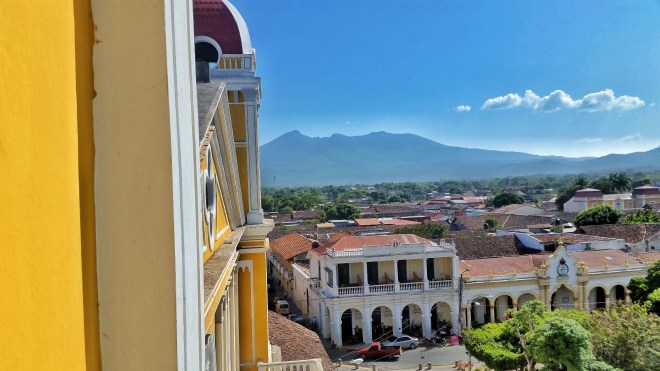 Our final activity of the day was to take a boat out into Lake Nicaragua, to weave in and out of islands of the archipelago known as Las Isletas.  The 365 tiny islets are the remains of the top of the once cone shaped Volcán Mombacho that looms over the town.  After its eruption long ago, the remains of the top of the volcano were scattered into the lake below, creating a chain of islands, which are now occupied by many foreigners who have bought up the insanely cheap land and built nice houses upon them.  We enjoyed slowly drifting amidst the islands, daydreaming about disappearing for a while on our own private oasis. 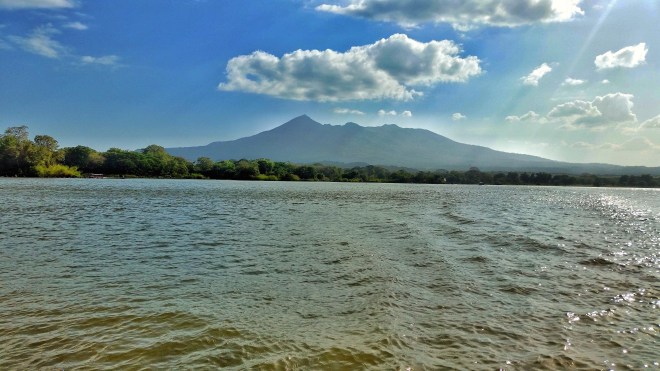 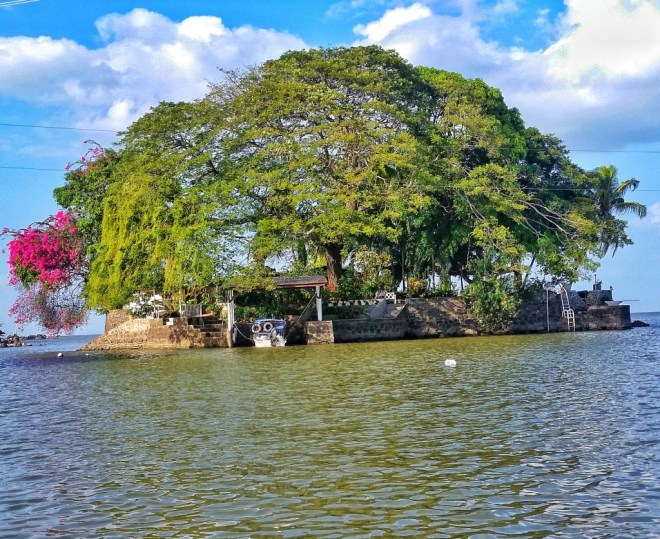 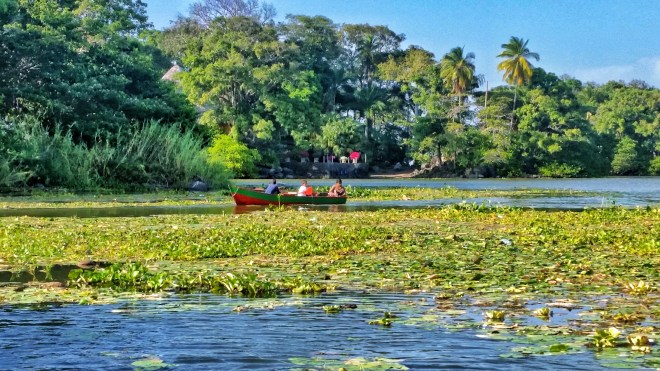 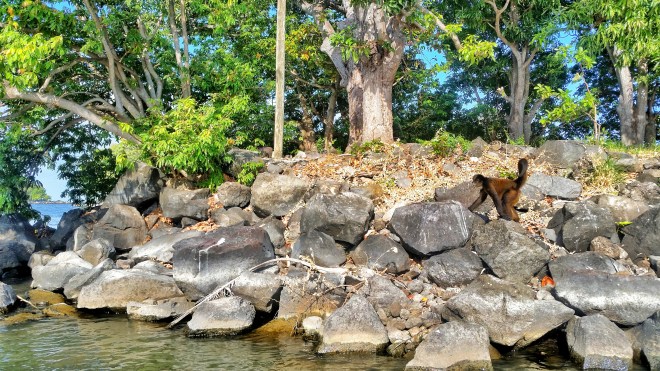 While we only had 1 day in Granada and its surrounding villages, we were completely charmed by the city.  You won’t find large crowds, tour buses, or roving packs of selfie stick toting tourists here.  Wandering the streets of Granada, you’ll feel like you’re among the locals, and there is a definite sense of the place being very untouched by the tourism industry.  Not a McDonalds or KFC to be found.  We left with a feeling of unfinished business here, as there was so much more to be seen, that we simply didn’t have the time for.  And with a flight time from Houston that was shorter than a drive into our state capital of Austin, we will definitely be coming back to finish that business.  Do yourself a favor, and experience this undiscovered place, before people catch on and the masses arrive.

3 thoughts on “A Day in Granada”