Our first night at the farm, we settled in after dinner for some beers and tunes sitting in front of the huge windows.  We were struck with how many stars we could see – coming from the outskirts of Houston with all the light pollution that comes along with it, we had never had such dark skies.  We had to go outside for a while just to look up and take it all in.  I attempted to capture it on my GoPro’s long exposure, but it doesn’t even capture half the stars we were able to see. The next day was Christina’s birthday, and I wanted to take her on an unforgettable sightseeing adventure for the special day – of course the crown jewel of Big Sir is Julia Pfeiffer Burns State Park, with its McWay Falls – that razor thin waterfall that jettisons itself directly onto a picturesque beach.  On the drive out, we crossed over the famous Bixby Bridge. 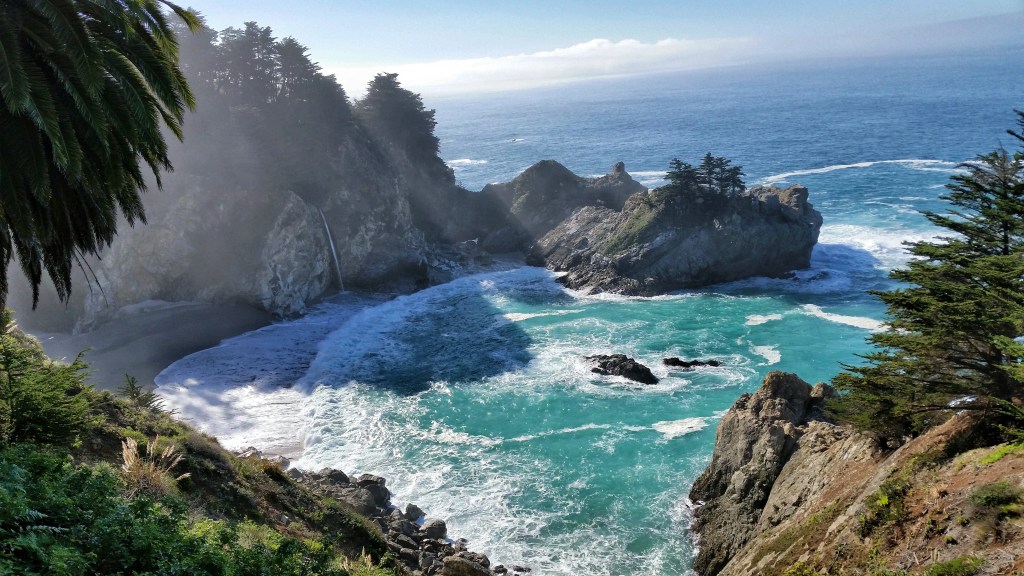 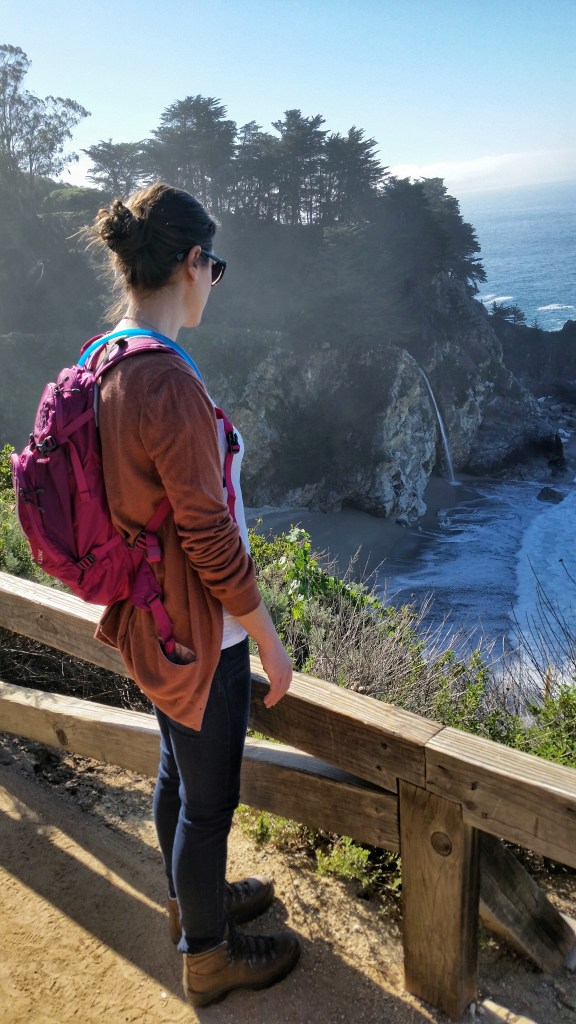 The trail to get to the viewpoint for McWay falls was a very short walk on an easy, flat path.  Maybe took 10 minutes walking to get there.  The entrance was directly in the parking lot of the park.  Of course after we were back home a few days after this, I found out we could have continued walking in the other direction and gotten a more unique vantage point of the falls, but oh well.  It was beautiful.

From the same parking lot, just to the opposite side, was the entrance to the Ewoldsen Trail, the quintessential Big Sur hiking experience.  With an elevation gain of 1600 feet, it was rather strenuous but with an incredible payoff.  The trail started in dense, old growth redwood forest. 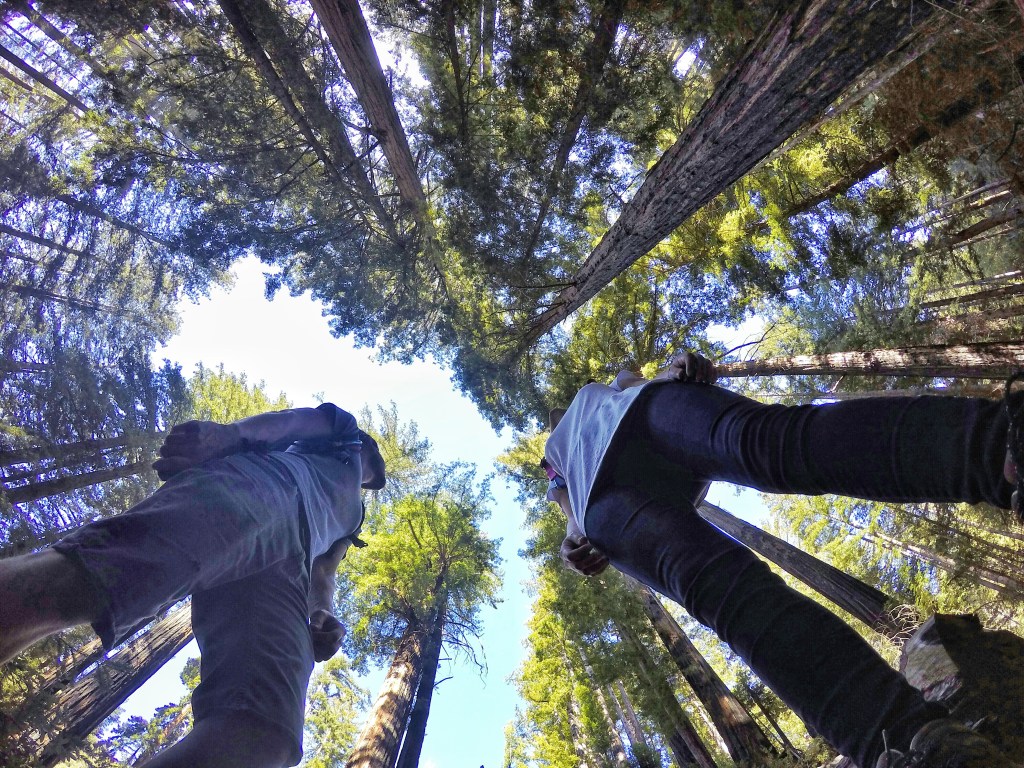 The trail wound it’s way up higher and the sun was out, so we were very glad we had our new CamelBaks! 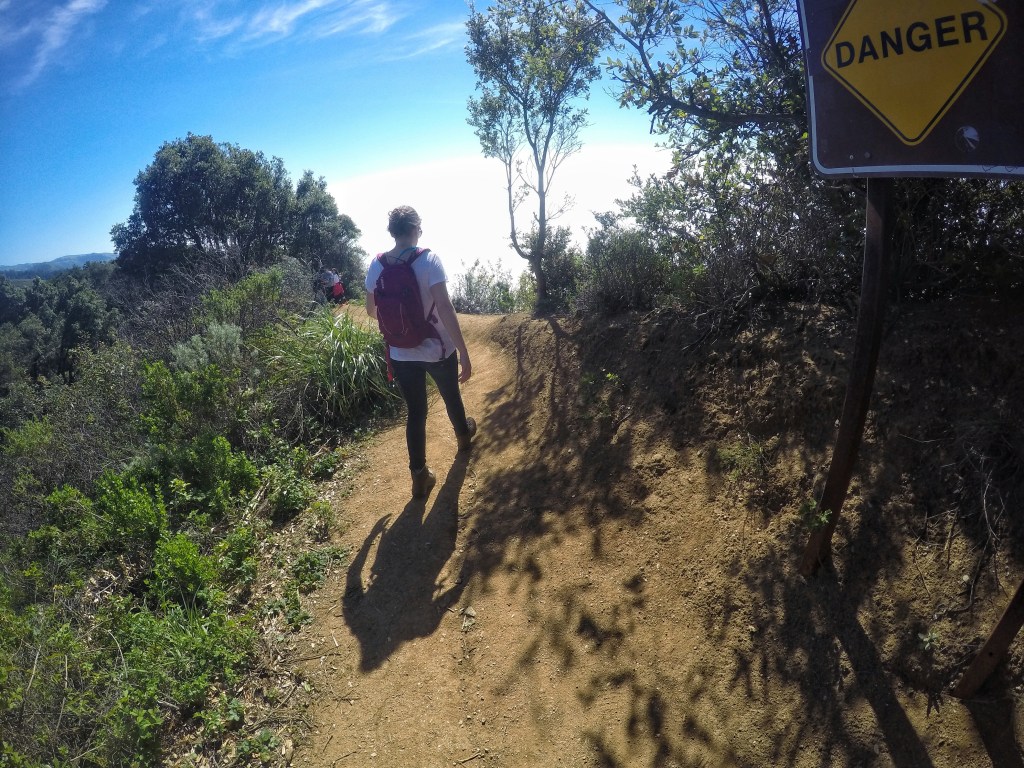 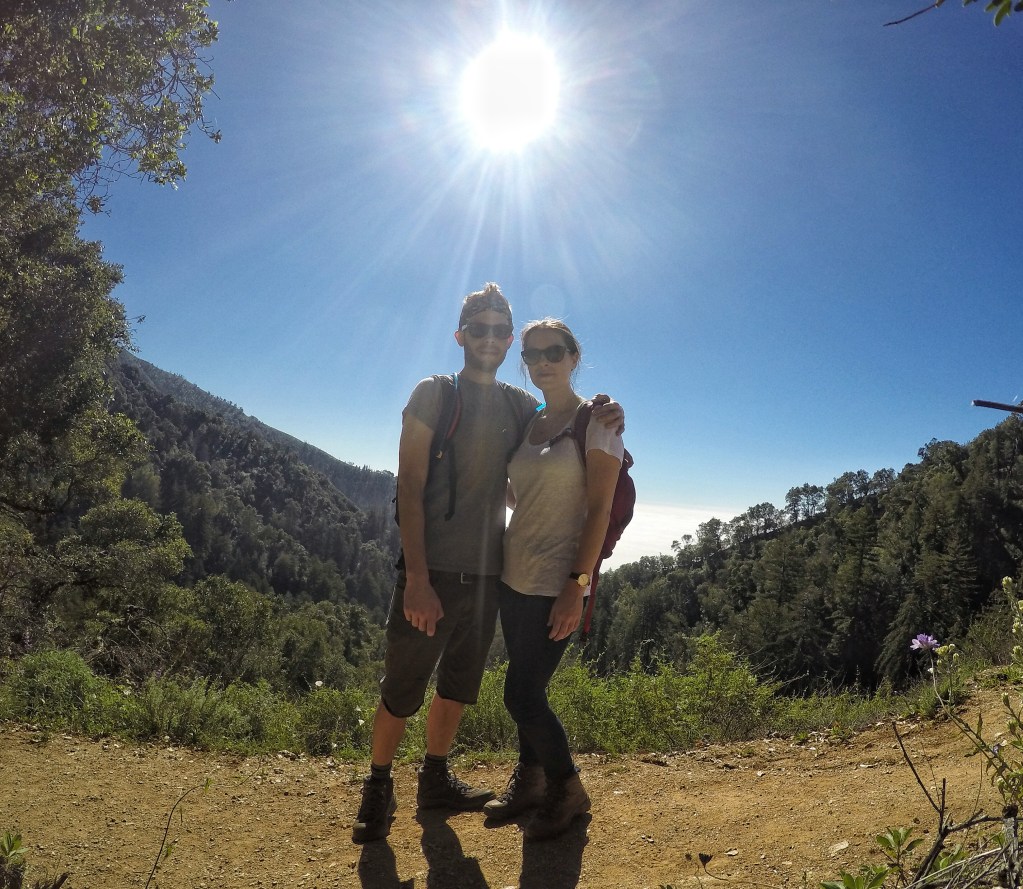 After about 2 hours, we reached the viewpoint, and it was definitely worth it!  The fog had rolled in along the coast during the course of our hike, so though we couldn’t see the Pacific below, it gave the really cool effect of having hiked above the clouds.  I really enjoyed the view.  We spent about 30 minutes up at the top, found a place to sit for a rest and unpacked our lunch of PB&J on locally baked sourdough. (I know that sounds gross but it was so good) 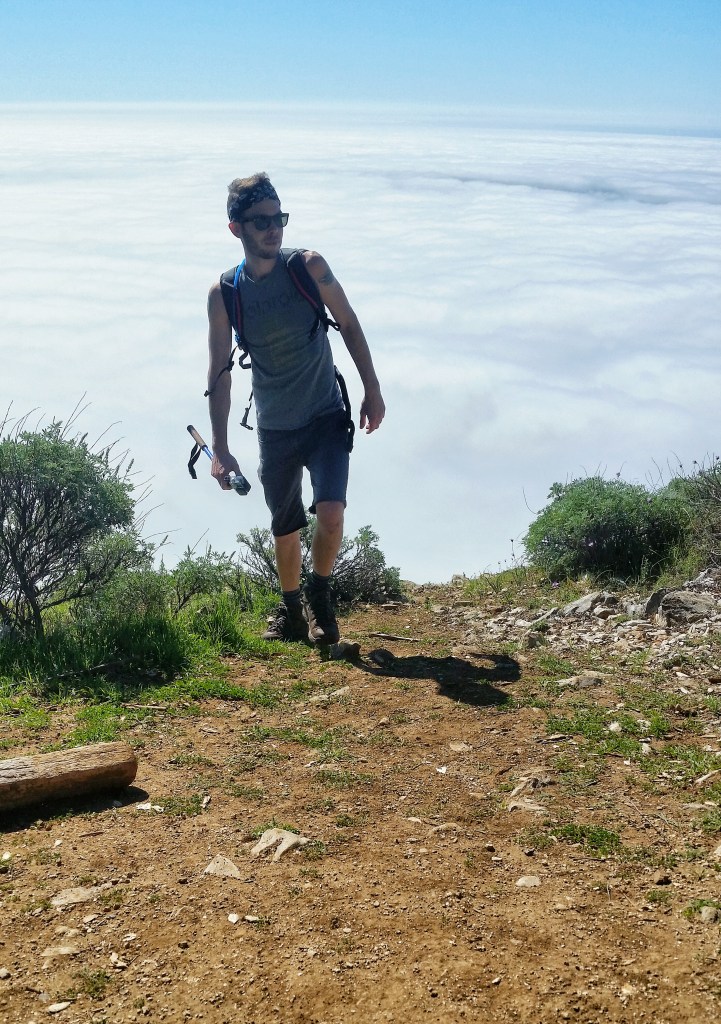 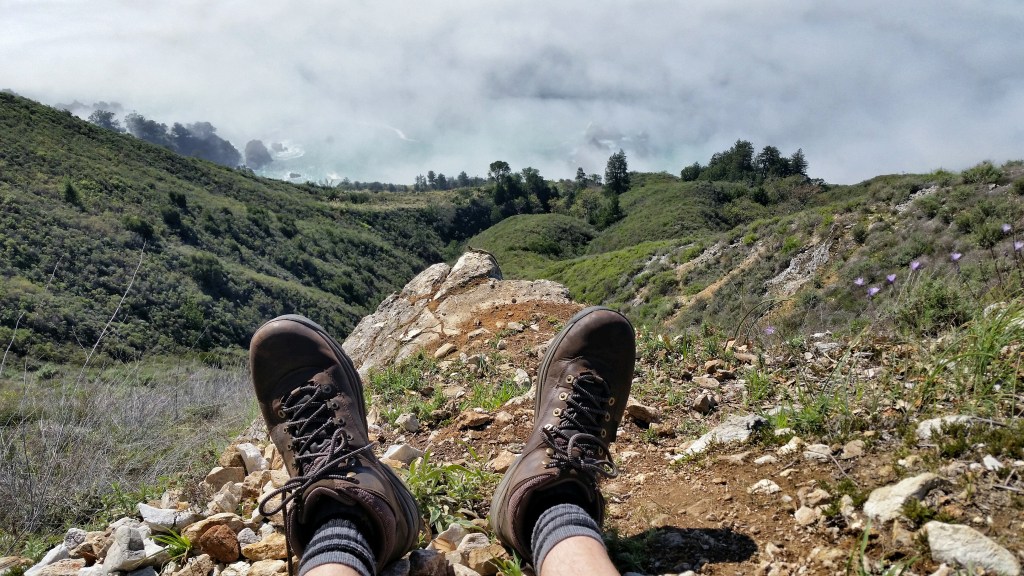 Christina took a moment to read up on the remainder of the hike in our trail guide during our rest. On the hike back down to the bottom, we came across this really cool looking rolling green hill that looked straight out of The Sound of Music.  Of course, being the intrepid explorer I am, I had to hike down to it.  The path down was extremely steep and narrow, and I had the whole thing to myself.  The hike back up to the main trail about destroyed me, but it was totally worth it. 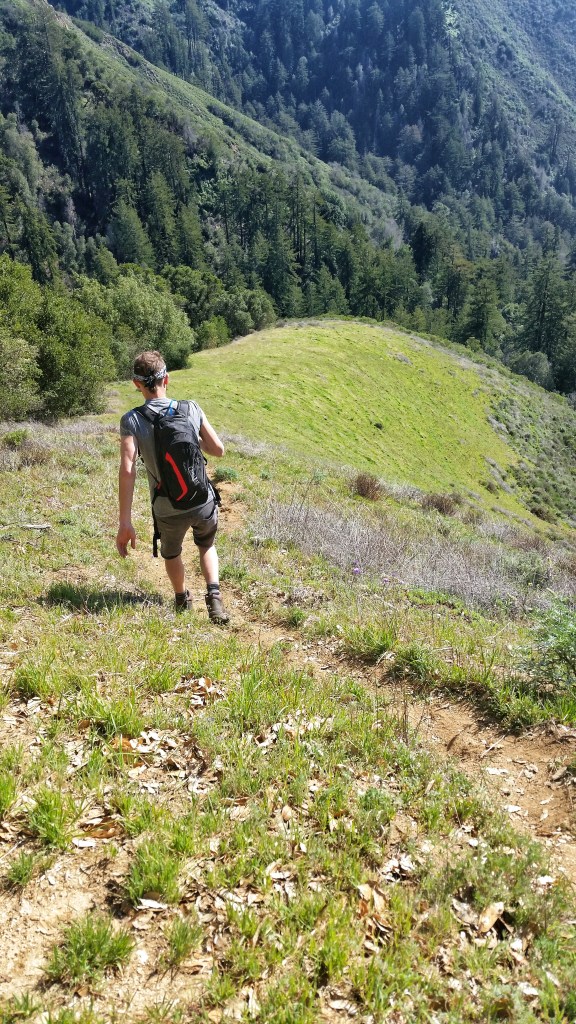 The hike took about 3 1/2 hours round trip, and we rewarded ourselves with some local craft brews at a nearby public house afterward, followed by our favorite meal of the trip at Big Sur Bakery.  I was worried we might look out of place in our hiking gear with our backpacks still in tow, but being that its such a hikers paradise, we weren’t the only weary wanderers around.  Our waiter was telling us of him bushwhacking a trail up a nearby mountain just earlier that afternoon.  All in all a great birthday for Christina!