“Please note: At the moment the Marienbrücke, the bridge over the Pollät gorge, is closed to visitors due to major renovation work.”

The above statement, which I stumbled upon in the weeks prior to our trip to the Bavarian town of Schwangau, Germany, on the official tourism website, came as quite a disappointment to me. Marienbrücke is a bridge that spans across the deep Pollat Gorge, and provides the most striking viewpoint for the castle that inspired Cinderella’s castle, Neuschwanstein.

Neuschwanstein is not an ancient castle by any means.  You won’t find here crumbling stone walls, ancient dungeons, or the scars of long forgotten battles.  Neuschwanstein was commissioned by Ludwig II, former king of Bavaria, in 1869, with construction being completed in 1892.

What the castle lacks in aged charm, it more than makes up for it in sheer flamboyant elegance.  Ludwig II was not a subtle man by any stretch of the imagination, and he designed his castle in a way that exuded lavish grandeur while being reminiscent of the traditional German knight style of castle.

My extensive internet research for an alternative viewpoint from which to capture the perfect photograph of Neuschwanstein in all its glory came up nil.  Sure, I ran across a few suggestions that would give you a decent view of the castle, but nothing like the view I had seen in photographs for years prior to our trip.  I reluctantly resigned myself to the fact that I simply wasn’t going to come away with the fantastic images of the castle for which I originally booked this leg of the trip, and decided to just enjoy the beautiful landscape of the area.

We spent our first hour in Schwangau taking a leisurely stroll around the wide open fields and farmland at the base of the hills upon which Neuschwanstein rests.  The views of the castle from here were pleasant, if a bit distant, and shrouded in shadow, as the sun was as of yet to emerge from behind the towering foothills of the Bavarian alps.  We booked a room in a new hotel just at the base of the castle called Villa Ludwig, and decided we’d go ahead and check in there, and try to get a bit closer to the castle afterward.  We had a good view of Neuschwanstein from our balcony, but we were still determined to find some secret trail that would give us the ultimate photographic angle.  Off we went, trudging up the steep hill that leads to the castle, passing along the way tour bus after tour bus, and hordes of fellow castle gawkers.  This was possibly the most touristed location we’ve ever visited.  And for good reason!  En route to the castle, we were treated to some nice, up-close views of the facade of Neuschwanstein. 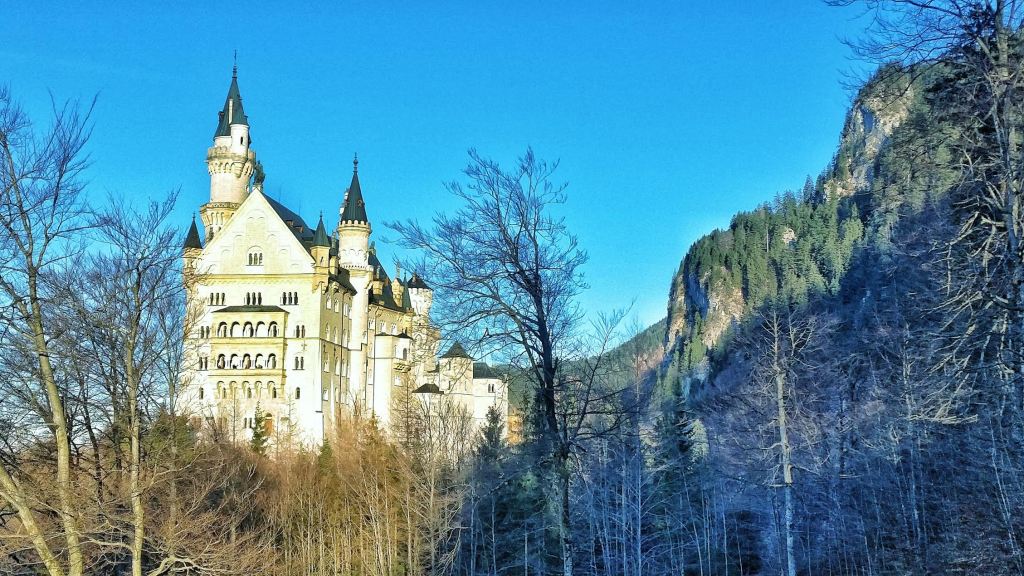 As the day got on in hours, we continued our march up the hill toward the castle, when we noticed a wooden fence and a couple of people just beyond it standing at what seemed to be a clearing that looked in the direction of the castle.  There was no official entrance into this area, and we instead just slipped between the wooden slats of the fence.  Once inside the restricted area, I discovered a slightly beaten path rapidly rising into the heavily wooded area of the hill.  I summoned Christina over to follow me, as something about the path just seemed to be calling out to me.  We climbed the footpath up through the trees and followed along what appeared to be a long forgotten, once sanctioned trail that obviously had been neglected for many years, before finally coming upon a leaf covered ridge sharply rising up before us.  There were maybe 6 or 7 other people sitting on this ridge, cameras all trained in one direction.  Could this be the view I had been looking for?  As I made my way up to the lip of the ridge, I glanced down and saw the closed off and scaffolded Marienbrucke bridge, from which the best views of the castle are found. 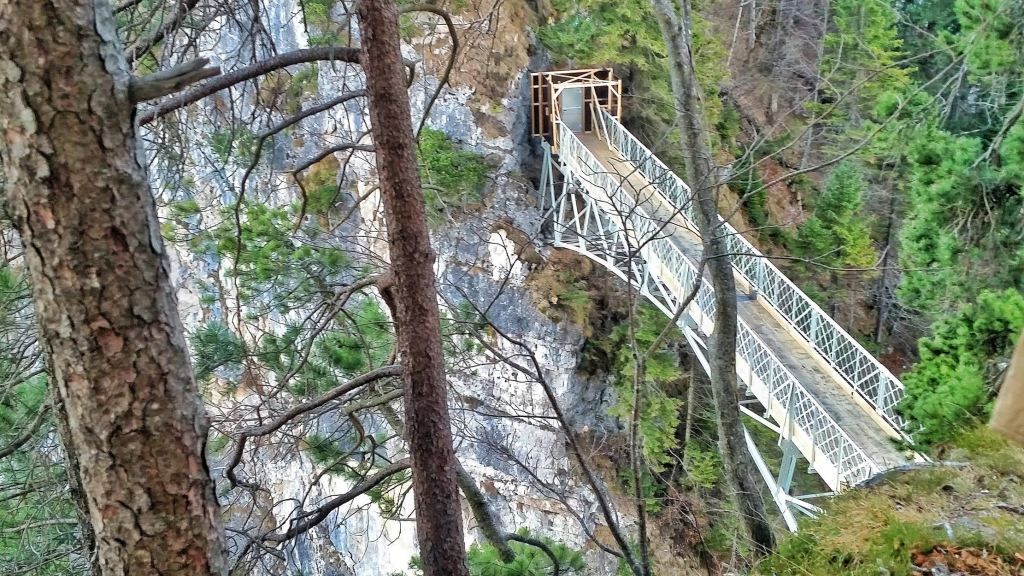 “This is a good sign!” I remarked to Christina.  As we came to the top of the ridge, there we saw, in all it’s Romanesque glory, the perfect view of Neuschwanstein Castle. 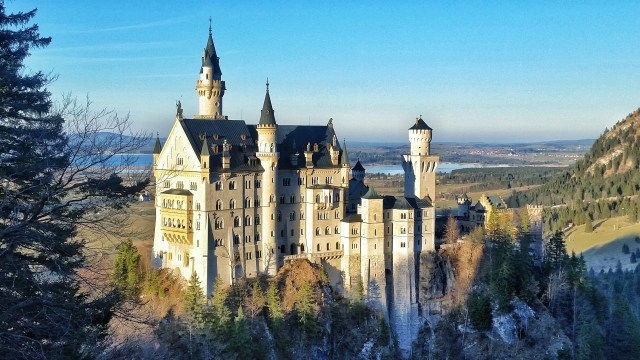 This was the view I had dreamed of, and we had stumbled on it by accident.  The sun was on its descent behind the mountains once again, and we just happened upon this view at the much sought after “golden hour” of photography, when the sun is at that perfect angle to highlight the subject in just the right way.  Within 5 minutes of taking the above photograph, the sun had already fallen behind the mountain, and Neuschwanstein once again fell back into shadow. 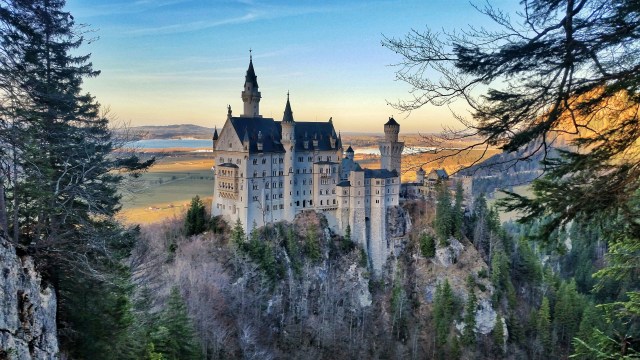 We stuck around for a bit, sitting upon the ridge, with a vertiginous drop straight down hundreds of feet into the gorge far below us, and lavished in the view for a while. 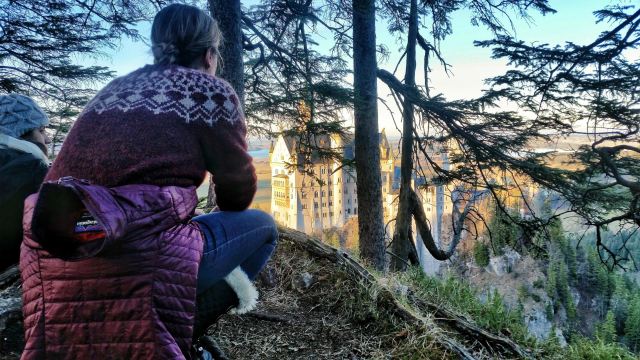 Somehow, luck had been with us this day, and afforded us the greatest glimpse we could have hoped to have gotten at the castle that brought us to this part of Germany to begin with.  As we left the ridge and made our way back to the more sanctioned trails, we noticed people frantically running with their cameras, trying in vain to capture their subject before the sun made it a bit more difficult to capture.  We directed a few camera-toting groups to our recently discovered spot, but unfortunately for them, they had missed, by minutes, the perfect photographic opportunity.  Many of them had spotted that ridge while actually being inside the castle and noticing some people out on the ridge and rushed out to find that very spot before they lost the natural lighting.

We don’t always have the best luck or timing in our travels, but once in a while, you’re destined to strike gold, and we certainly did strike gold on this day.  That night, we returned to our hotel, in the shadow of the castle high above us, and were happy that things worked out so well for us. 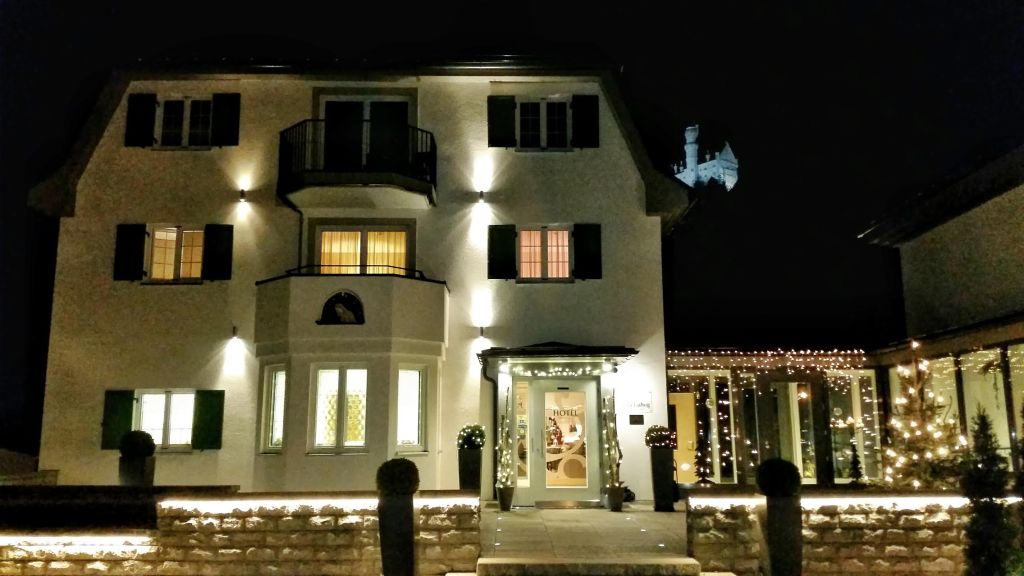 I’ve published a follow up article to this post that describes how to find this particular viewpoint.  Check it out if here!