Colorful, ornate buildings line a crystal clear alpine river, while towering, snow capped mountains loom in all directions around you.  When one thinks of Austria, the mind tends to immediately go to Salzburg or Vienna.  And while Innsbruck was never really on my radar prior to researching my trip to Austria, (it first came to my attention while just zooming in and out of Google maps) it certainly blew me away with its charm and scenery, and ended up being my favorite stop of our 11 day trip, and is definitely worthy of the attention of any visitor to the country. 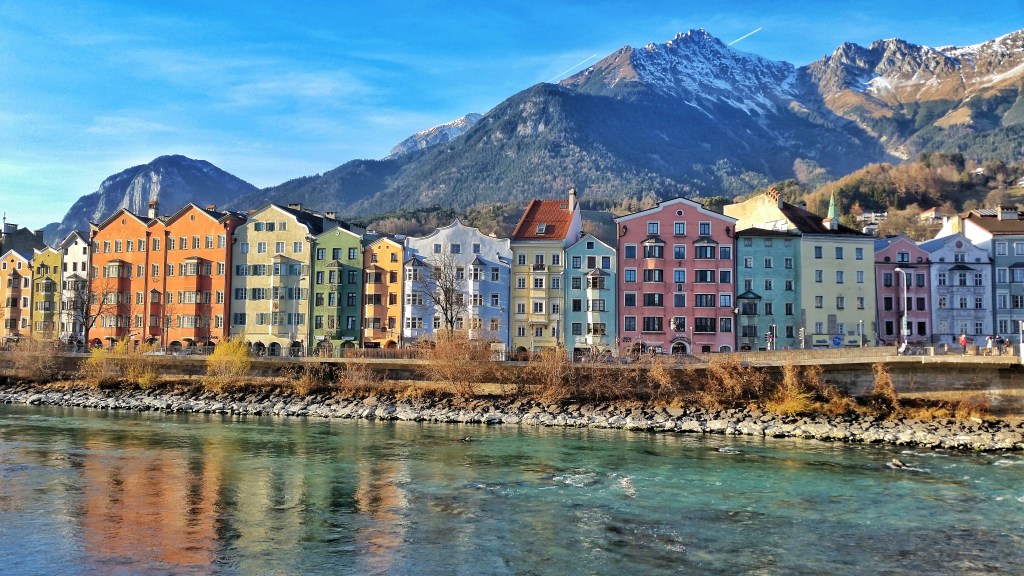 Our journey to Innsbruck began on my birthday, December 27th after we sadly had to part with our amazing apartment in Salzburg.  Though we enjoyed our four days in Salzburg and its surroundings, we were ready to head deeper into the mountain range that brought us here in the first place.

Our first stop of the day was just outside of Innsbruck at the Kristallwelten, also known as the Swarovski Crystal Museum in Wattens.  Now I must admit, a visit to a Swarovski museum would not ordinarily sound like a great way to spend my birthday to me, but I was allured by the bizarre exhibitions contained within and the surreal sculptures that dot the grounds, most notably a massive green ivy covered face jutting from a hillside with crystalline eyes and water cascading from it’s mouth. 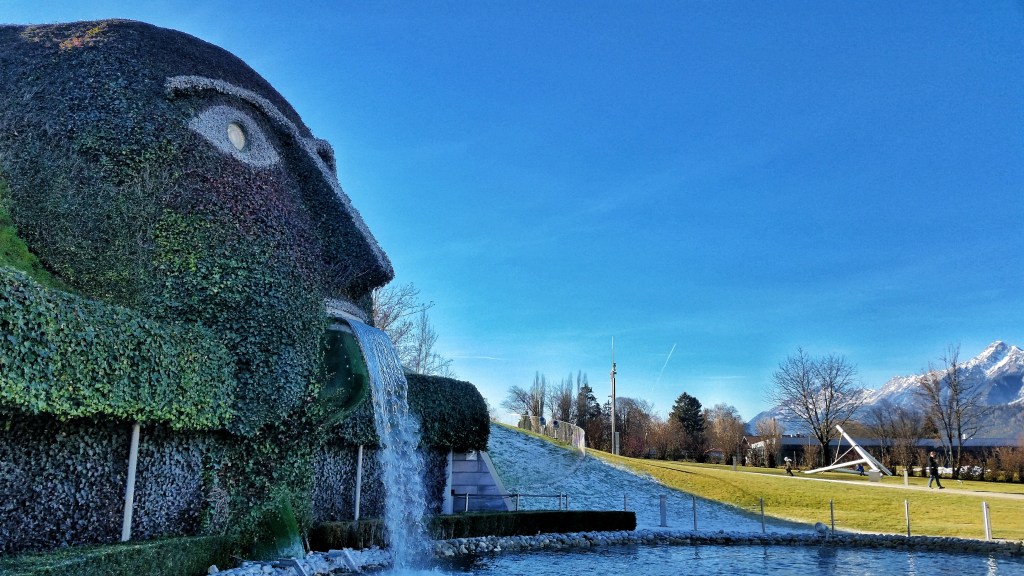 The above photo was the entrance to the museum, and once inside, we were treated to room after room of dreamlike art pieces, each of which integrated the Swarovski crystals to some degree. 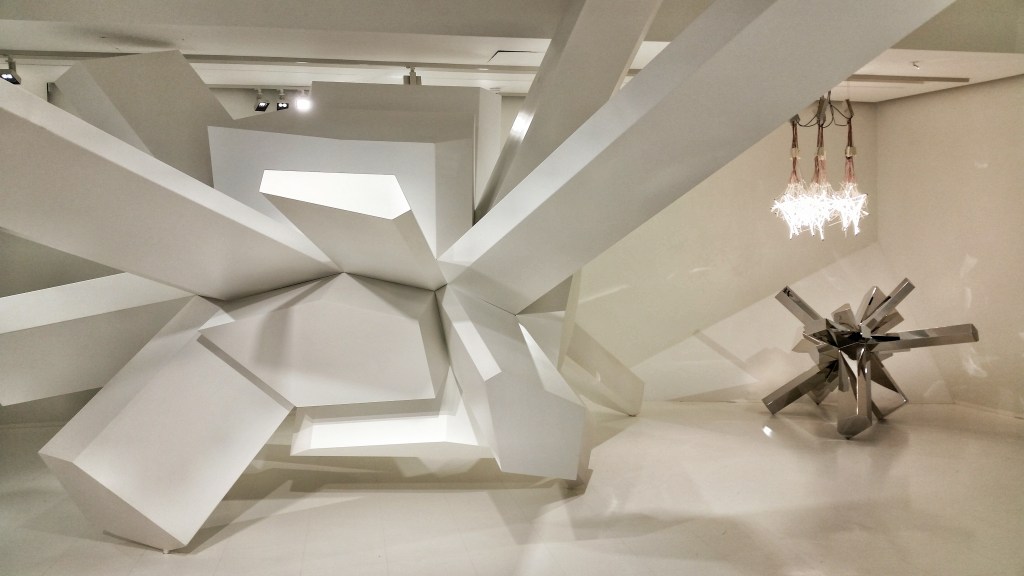 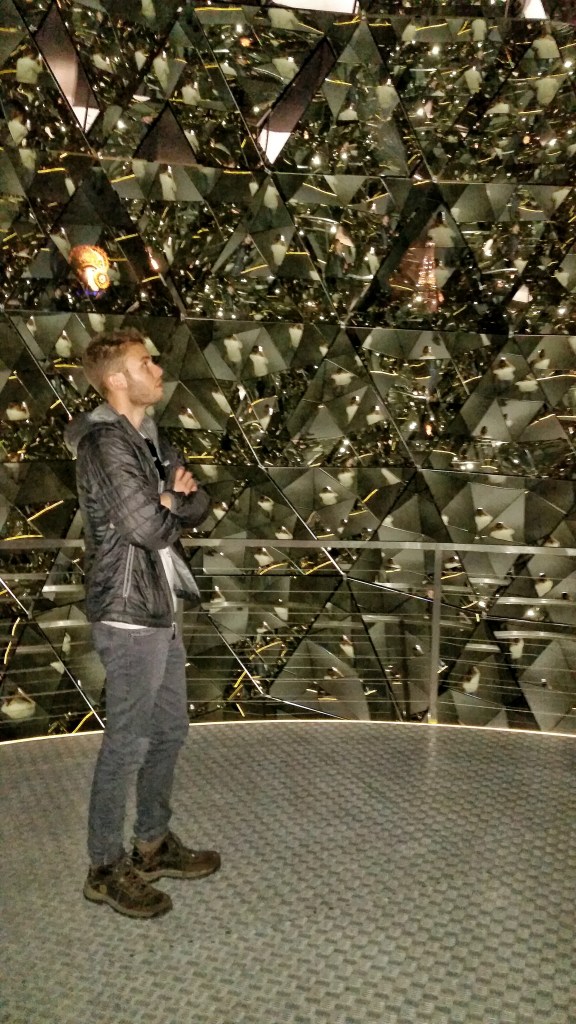 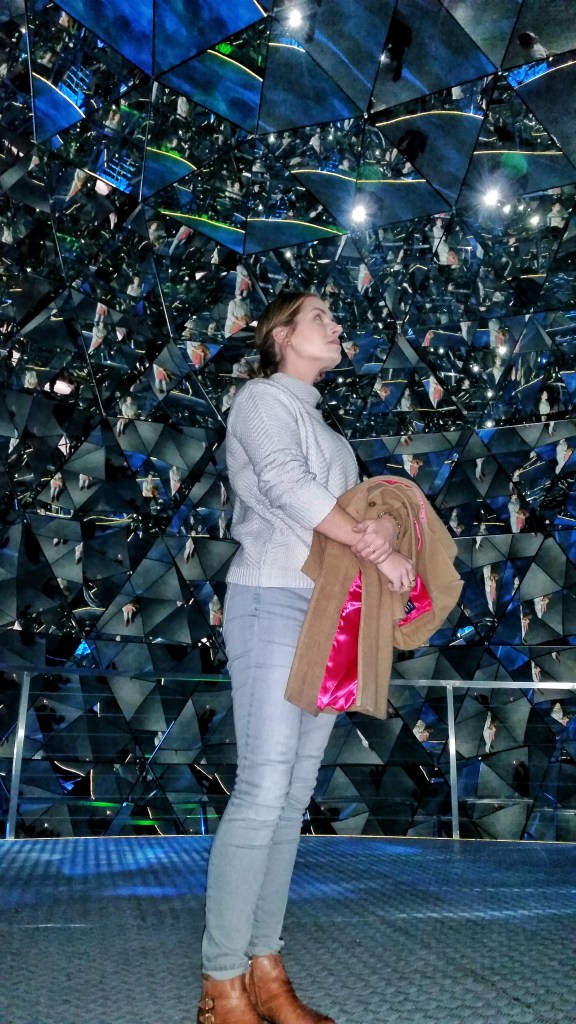 From the museum, it was only a short 20 minute drive into Innsbruck, and we arrived at our lodging, Hotel Innsbruck, right in the heart of the old town.  With the low winter sun inching it’s way back down toward the horizon, we were hoping to get checked in to the hotel and out into the city as quickly as we could before the sun dipped below the mountains that surround the city.  Daylight is a precious commodity this time of year at this latitude, as the sun rises at 8 AM and sets just after 3.

We very much enjoyed walking the old city streets, ducking in and out of ancient squares and admiring the baroque architecture and the opulent balcony of the Goldenes Daschl (Golden Roof) – one of the city’s more popular attractions.  Though Christmas had passed 2 days prior, the Christkindlmarkt of the city were still open, serving up Gluhwein, schnitzel, sausages, and hot cocoa (with rum, or course).  I had been on the hunt for roasted chestnuts at all the various markets we had visited up until this point, with no results thus far.  Innsbruck was the ticket as we finally stumbled upon a booth selling them later that evening. 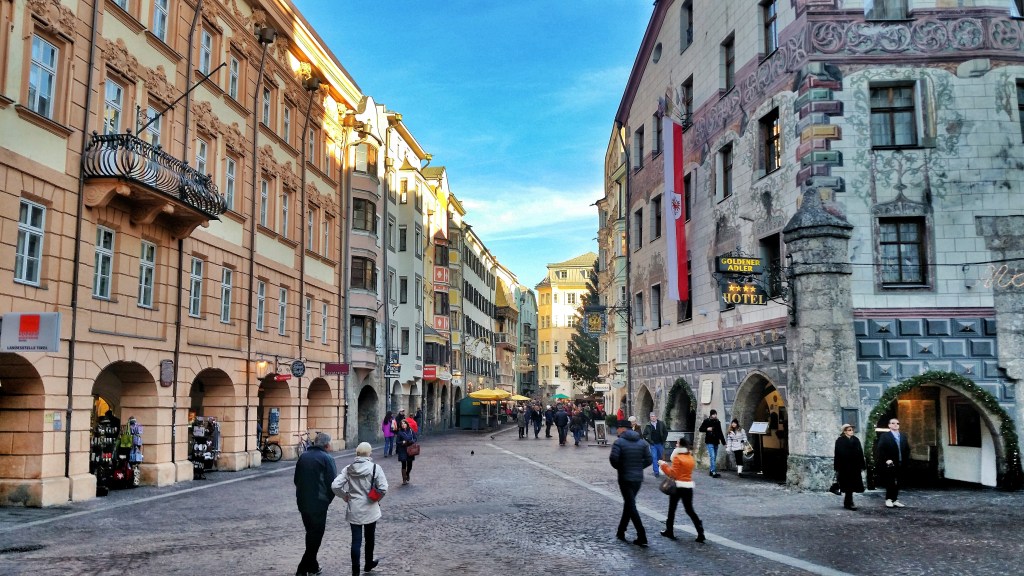 After wandering the cobblestone streets for a bit, Christina noticed some people high above us peaking their heads and selfie sticks from the top of an old tower, the entrance to which we were directly adjacent to.  This led us to find that for a couple Euros, we could wind our way to the top as well to give us an aerial view of the city.  The ancient staircase on the way up was extremely charming and well preserved, but we couldn’t help but be taken aback by all the people who have felt the urge to leave their mark upon the historical tower by carving their names into the wooden railing, walls, and any other available surface within reach.

Once we reached the top, the views over the town were impressive and gave us a better grasp on the layout of things. 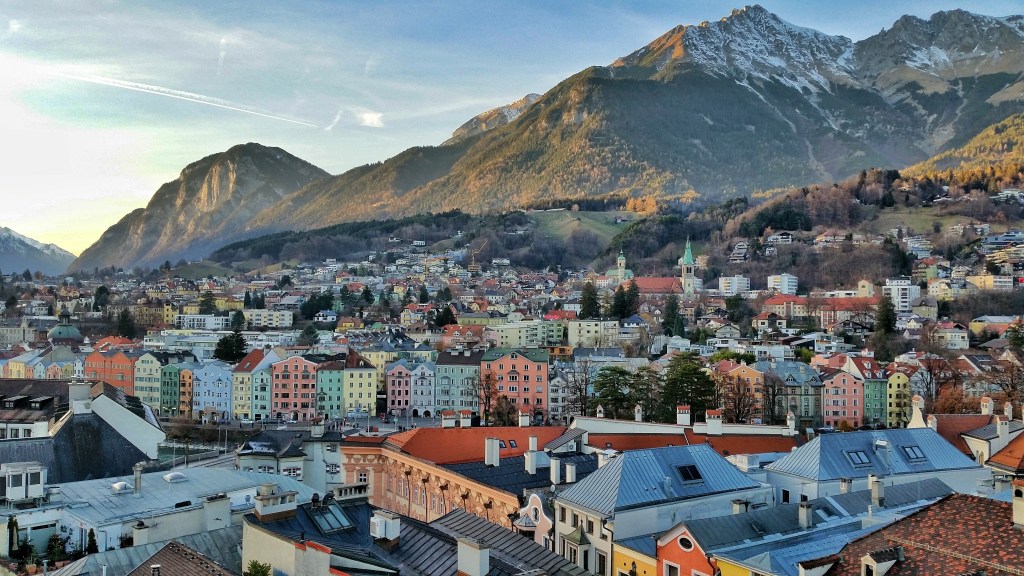 Christina seemed to almost immediately become familiar with the city, and inexplicably always knew which way to go from the first hour of being in Innsbruck.  “Shit, I am so turned around right now, I’m pretty sure our hotel is that way”  I remarked to Christina after walking through alley after narrow alley, through various squares, and in and out of shops and Christmas markets, for a few hours. “No, if we just take a right up ahead, that will put us just a block away from our hotel” she corrected me, and I’ll be damned if she wasn’t dead on.  Her penchant for navigating foreign cities and unfamiliar grounds will never cease to amaze me.

The following day was one I had long been looking forward to after months of planning our trip – getting ourselves up into the highest mountains we had yet visited on this trip:  The Nordkette.  To reach the Nordkette, you first take a very modern funicular up to Hungerburg station, at 860 meters above sea level.  Once you reach Hungerburg, you depart the funicular and hop on the cable car that takes you dramatically up the mountainside to Seegrube station, at 6,250 feet.  After stepping off the cable car and through the restaurant, you are immediately presented with a staggering view of the city of Innsbruck thousands of feet below you.  It is almost literally breathtaking. 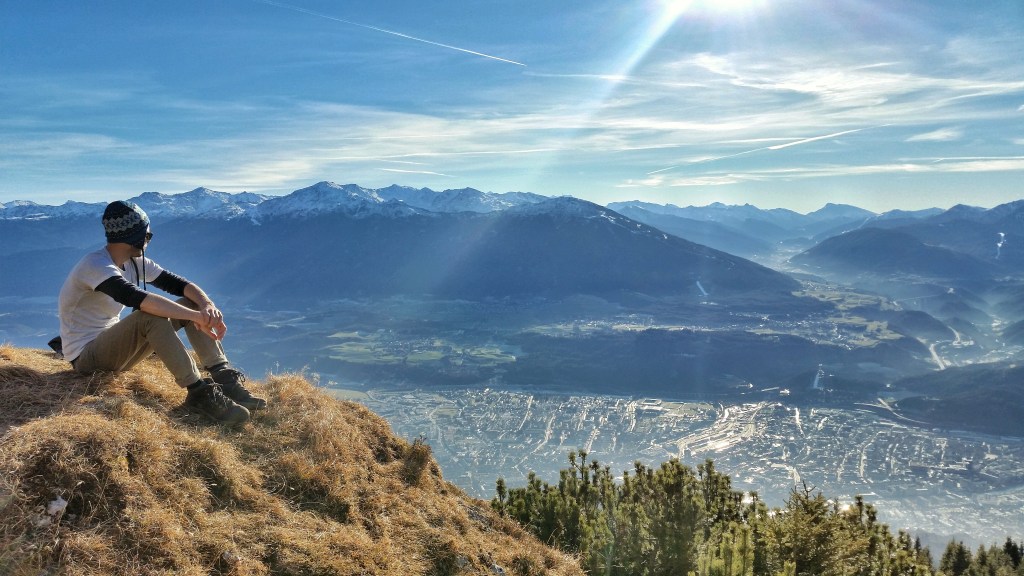 Typically at this time of year, one might take a gentle stroll through a well groomed path cut into the snow pack, but with no snow to speak of (insane at this elevation and in late December!), all the trails that would be available to a summer mountain trekker were at our disposal.  We immediately hit the trails and began making our way across the side of the mountain – the towering, treeless, jagged granite peaks soaring above us on our right, and the steep slope reaching far down into the forests below us to our left.  We were gloriously alone on our walk, as it was still early in the day, and most visitors were sunning themselves back at Seegrube station, or grabbing a lunch before hitting the small, artificially snowed ski run right next to the cable car station.  Pure silence enveloped us and the slanting wintertime sun warmed us to the point that we needed to remove our coats and roll up our sleeves.  Did I mention we were at almost seven thousand feet in late December?

As our path began to narrow, and get a bit rockier and uneven, the scenery continued to grow ever more stunning when, as I rounded a corner, I startled a small group of Chamois, a relative of the antelope, who leapt up and ran a bit further afield of me.  I was a bit startled myself, but couldn’t help but be in awe of the creatures that were now stopped and staring intently at me from a few yards away.  As I scrambled to get my GoPro turned on so I could capture the animals on film, they began issuing some very threatening snorts and hisses at me that caused me to immediately turn around and walk as quickly away as I could, all the while just hoping that they weren’t following behind me.  They had some pretty big horns, of which I did not want to be on the receiving end.

We continued to meander along the various trails beaten by countless hiking boots into the side of the mountain, just taking in the impressive views of the sprawling metropolis below us, and the endless mountains stretching off into the horizon beyond. 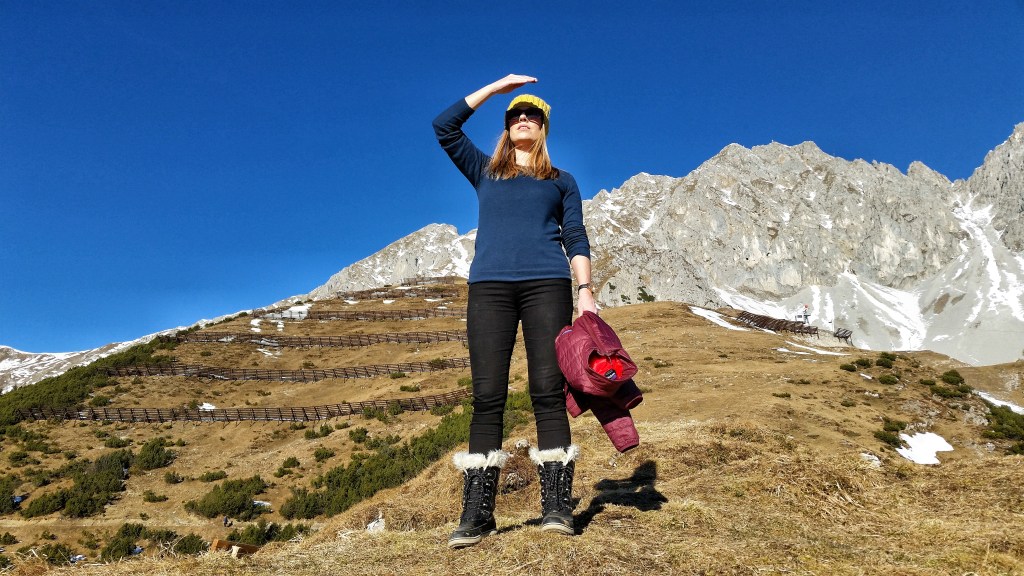 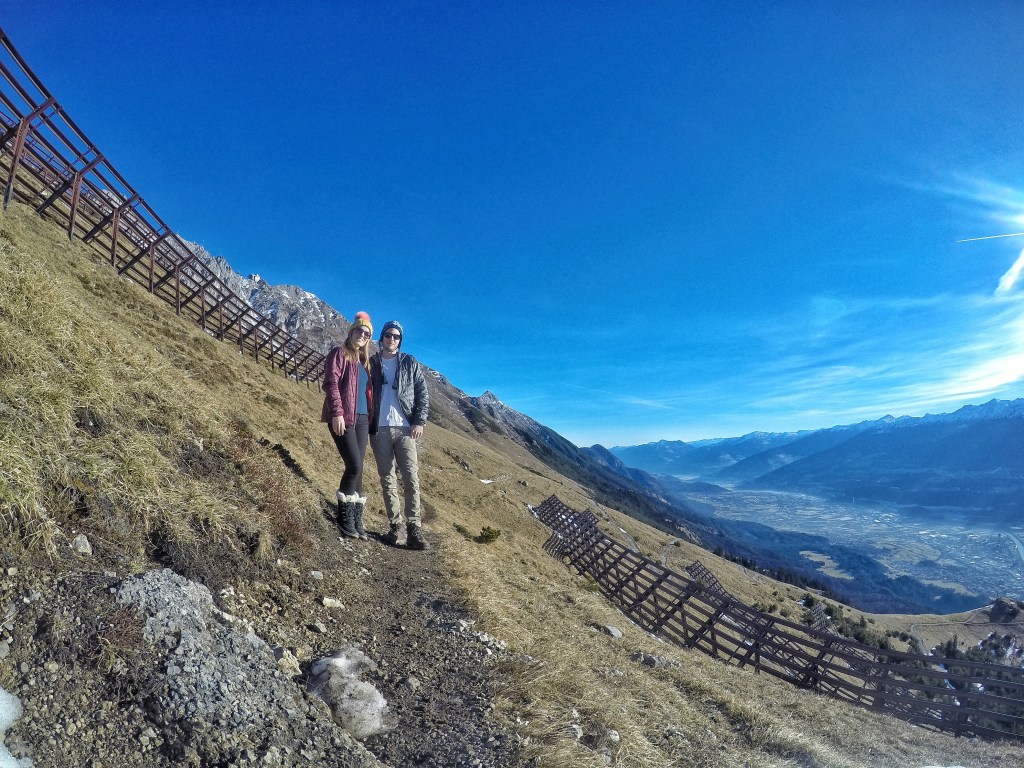 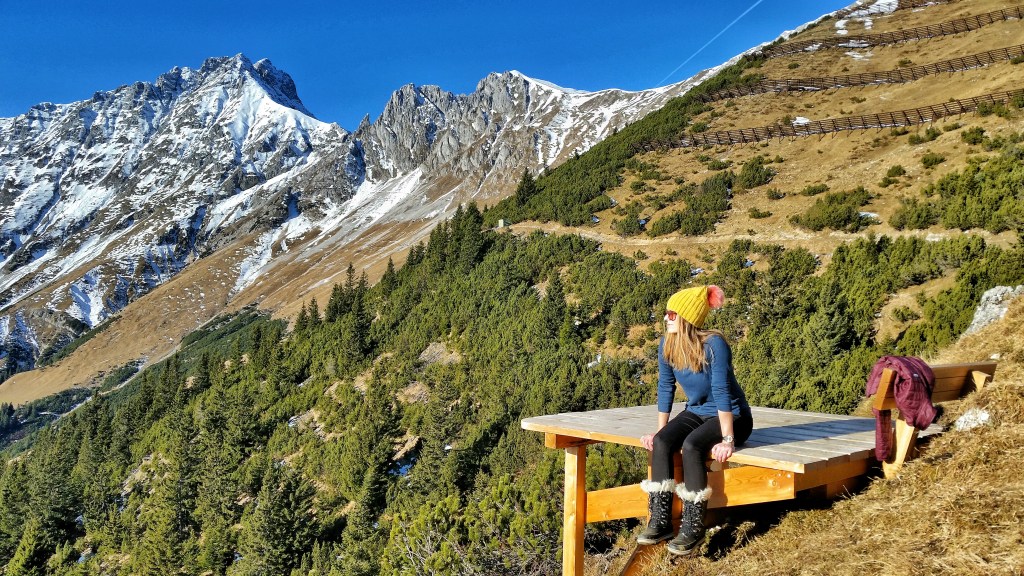 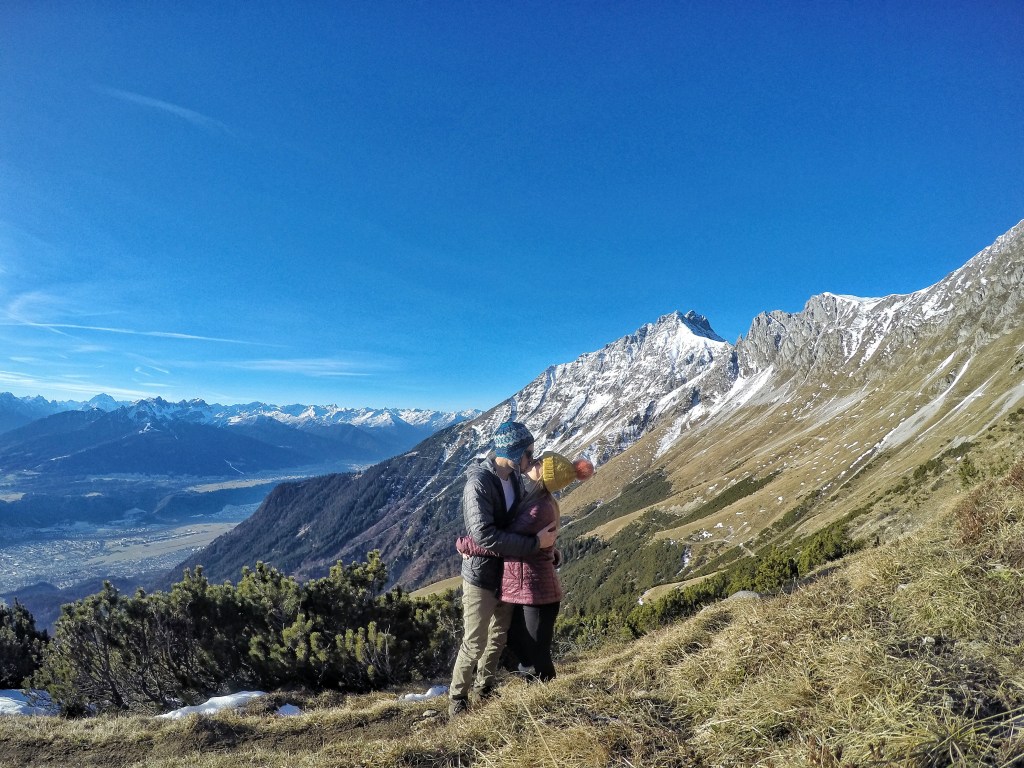 After a couple of hours we headed back to the restaurant at the cable car station and had our traditional post hike beer, maybe the most scenic beer we’ve ever had. 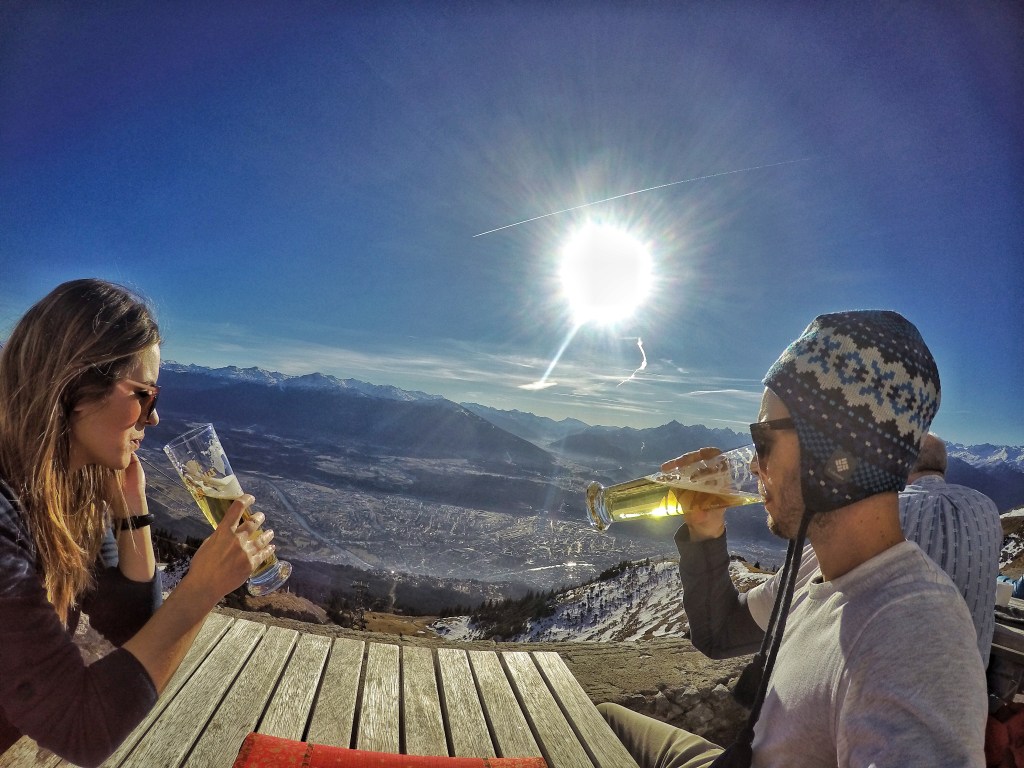 From here, the only direction on my mind was up.  We hopped on the cable car that would take us up to the next stop, Hafelekarspitze, a peak that sits far above the tree line at 7,657 feet.  There was a fair amount of snow at this point, and we carefully made our way across the slick snow/ice up to the highest point on the mountain. 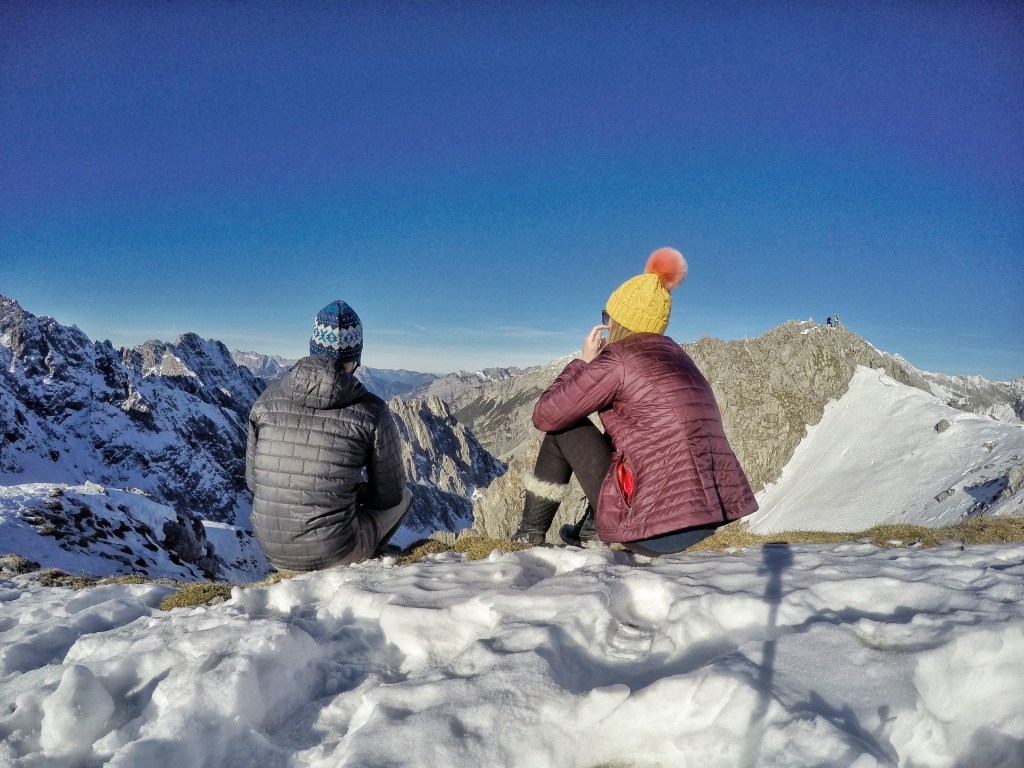 After getting to spend a few hours of pretending to be a professional Alpinist, walking from peak to peak, taking in sweeping views and scrambling through trails, the day was growing old, and we still had a few things on our agenda back down on Earth before the sun set.  After thoroughly enjoying ourselves, we headed back down into Innsbruck ,and visited the Hofburg Palace, a beautiful and baroque building in the altstadt.  I managed to grab one picture of the grand dining hall before being castigated in German by a stern older lady who did not approve of my photo taking. 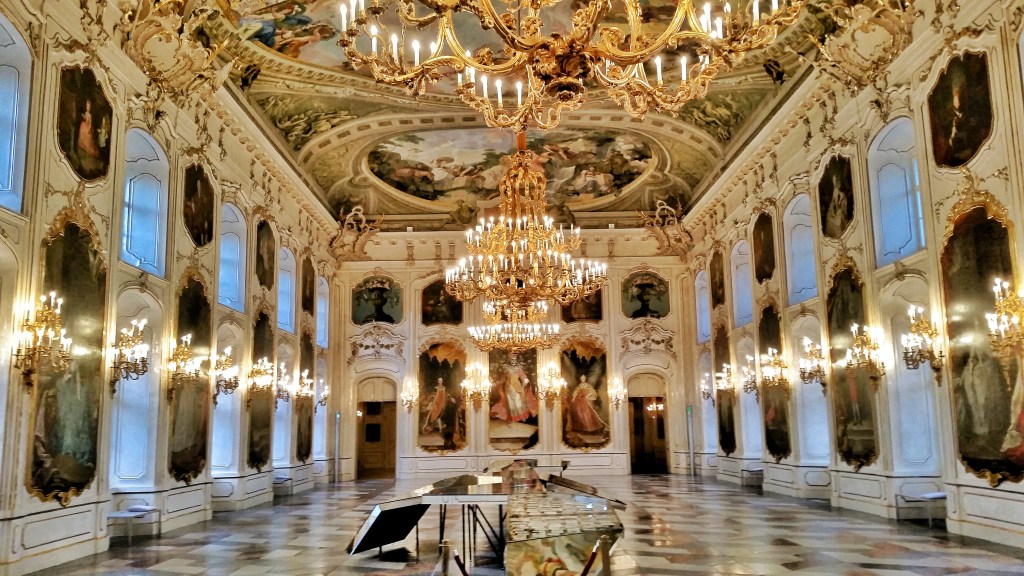 As the sun slipped once again behind the mountains, we wandered back into the old town to have some warm beverages before settling in the for evening. As we entered the main square at the bottom of the Goldenes Daschl, the sounds of a brass band suddenly erupted from the balcony above us, playing beautiful christmas music. The crowd in the square immediately stopped their revelry and all turned in the direction of the music, necks craned up to see the musicians that had spontaneously begun serenading us. They wrapped up their song, while the audience showed their appreciation, when suddenly, from another balcony just to our left, another band began to play another beautiful song. The entire crowd in the square, dumbstruck by the spectacle, all turned in unison and craned their necks once again to watch this new brass band play. They wrapped up their song, and from an adjacent building with open windows, a full orchestra began to play from within. This pattern repeated itself for about 30 minutes, with each of the 3 balconies trading off playing songs. It was a wonderfully spontaneous display – it’s these types of random moments that really make travel all the more special. 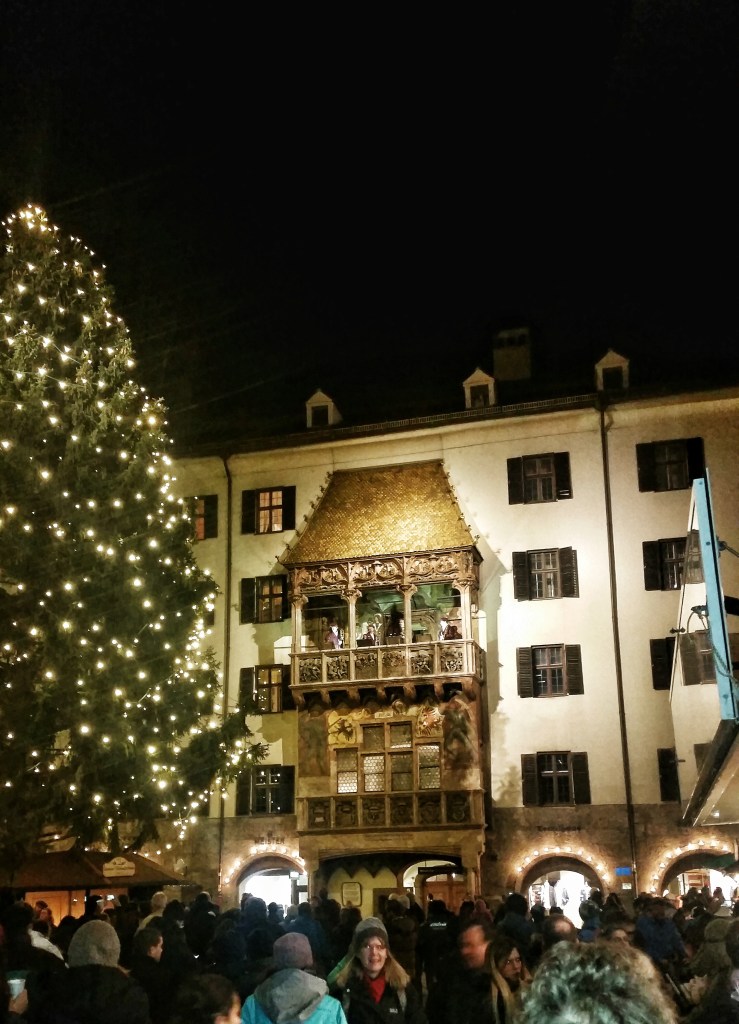 The brass band playing to a spellbound crowd from the balcony of the Goldenes Daschl.

What a great send off on our final night in our favorite stop thus far of our trip.  Soon after, we retired back to our hotel for the evening to prepare for our early morning departure into Germany the following morning, with our destination being the mythical Neuschwanstein castle.

One thought on “Innsbruck: Crown Jewel of the Austrian Alps”