December 25th brought with it another sunny day to Salzburg, a recurring theme on this trip.  Upon our arrival 2 days prior, we made sure to immediately hit the grocery store, as we knew that everything would be shutting down for next 4 days due to the holidays.  We wanted to take advantage of the full kitchen in our Salzburg apartment while we had it.  I cooked us a Christmas breakfast before we hit the road for St. Gilgen, Austria, about a 40 minute drive south of Salzburg, located in the Salzkammergut lake district.  The Wolfgangsee lake is surrounded by three very quaint and traditional villages – St. Gilgen at the northwest end, Sankt Wolfgang, toward the central shore, and Strobl to the far southeast side.  All three villages are linked by a boat that runs multiple times a day.

We arrived to find St. Gilgen quiet and peaceful.  The chimneys of the traditional Austrian stone and wood chalets of the village issued the pleasant aroma of wood burning fires into the chilled air, while the occasional couple walked hand in hand enjoying a pleasant Christmas morning stroll and local residents walked their dog or went for a jog through the abundant paths running throughout the village.  This is the kind of place I wouldn’t have minded basing myself for a couple of days to just get away from the crowds, read a good book, and take some relaxing hikes.  The juxtaposition of the lake and the towering alps on all sides was spellbinding and seemed like a view I could never get used to if I were to live there for a hundred years.

We came to St. Gilgen with the intention of taking the cable car up to the top of Zwölferhorn Mountain.  Austrian mountains are dotted with hüttes, or mountain huts, where you can settle in for a warm meal and a drink.  I had read of a place at the top of Zwölferhorn called Franzl’s Hutte, which looked like a cozy place to spend some time after hiking, but didn’t take into consideration beforehand that it was Christmas day, and therefore was not open.

The views, once we were at the top of the mountain, looked out over the lake, and off into the snow capped spine of the alps that run through the center of Austria and into Switzerland and southern Germany. 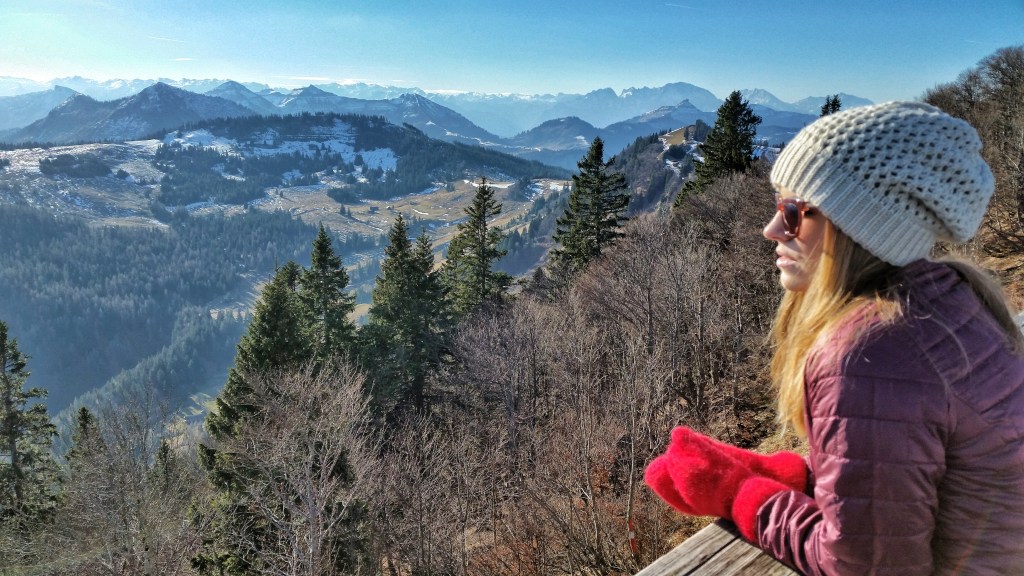 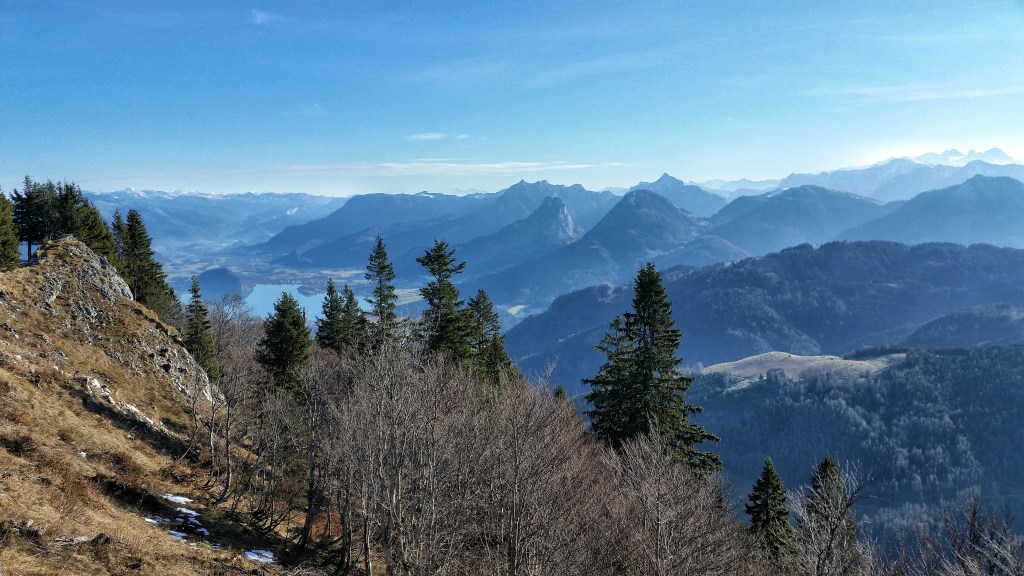 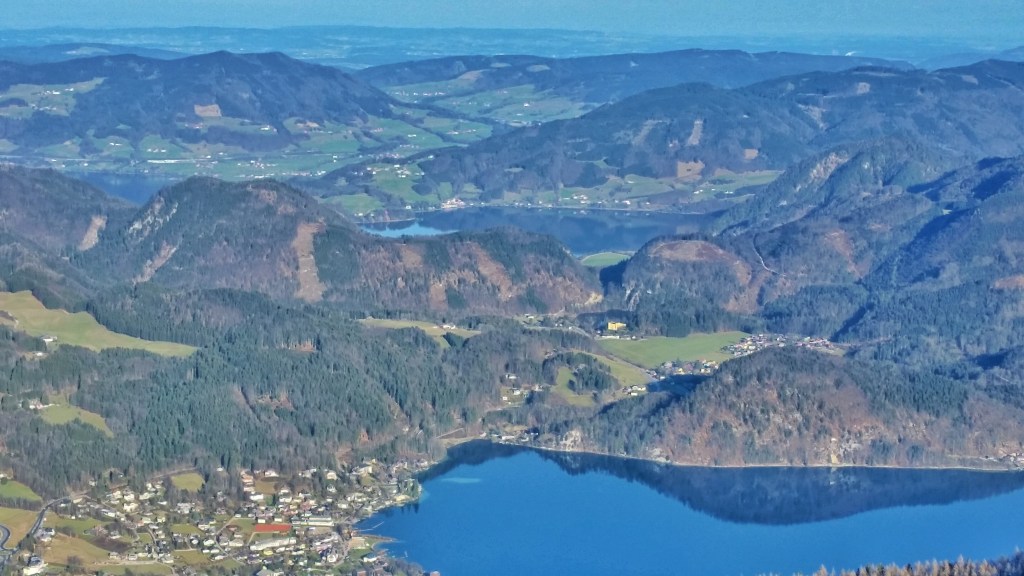 We meandered along the serene trails for an hour or so, in no rush, and making sure to really let the views soak in, while I found a bench along a ridge with a commanding view of Strobl, where I spent some time sketching the view before me.  Prior to embarking on this trip, I invested in a moleskine notebook, with the intent of slowing down my always on the move nature by really looking at a scene and all it entails, and putting it down onto paper.  I have found I get much more out of travel when I work in this way, and my memory of a beautiful landscape is much more imprinted onto my memory than if I were to just walk up, snap a photo, and move on to the next thing.  So instead, Christina took a photo of me doing just that. 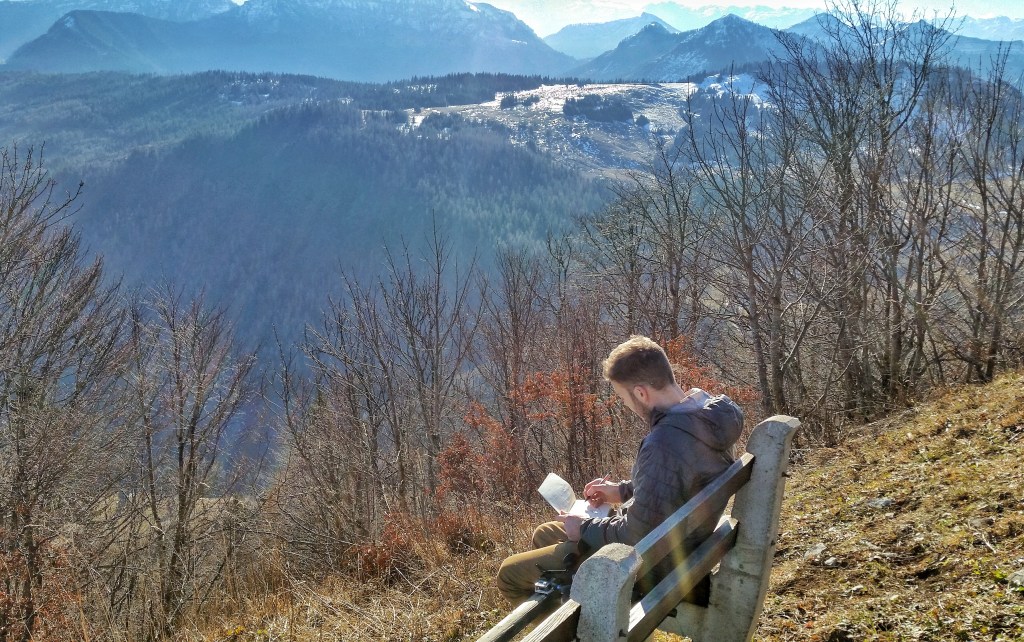 While Franzl’s Hutte was closed for the holidays, there was luckily a small restaurant tucked below the cable car station, where we grabbed a couple of beers (a post-hike tradition for us) and a warm Apfelstrudel.  The views on the way back down from the cable car were equally as remarkable as the views from the top of the mountain.  Not a bad way to spend Christmas day. 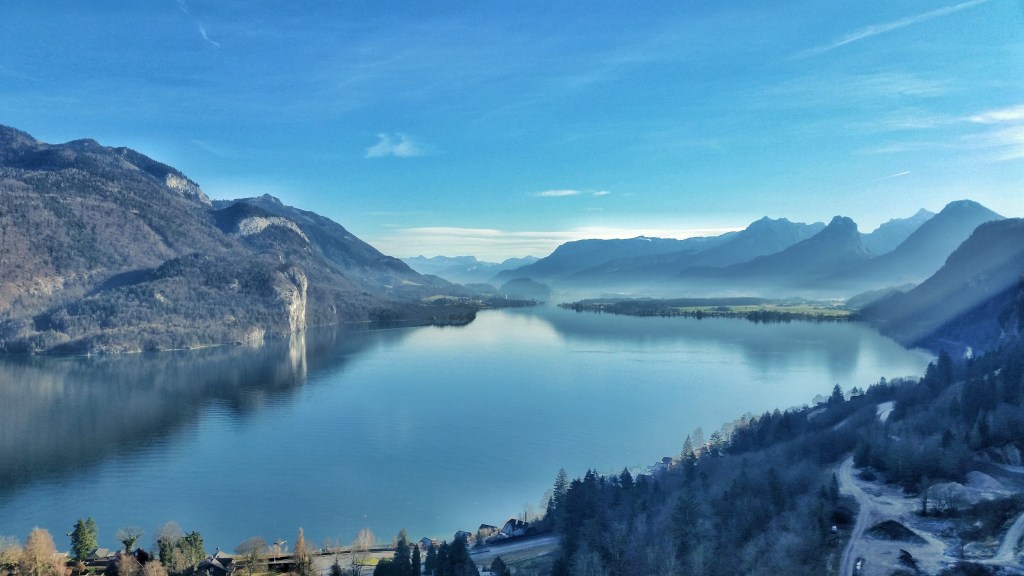 The following day (Boxing Day, to my friends from the Commonwealth nations) had us taking another side trip from Salzburg, this time to Berchtesgaden, Germany, and the Konigssee lake.  The journey to get here was fraught with mishap, but the end result was ultimately worth the trouble.

Berchtesgaden and the Konigssee lies in a small bit of Germany that juts down into Austria, and is surrounded on all sides by Austria itself, other than  on its northern flank.  On a normal day, it should take between 15 to 20 minutes to drive into Berchtesgaden from Salzburg proper.  But when your rental car is equipped with a GPS navigation system that comes from the island of misfit electronics, things are not going to be so easy.  I entered the address for our destination before departing our parking area in Salzburg, and began following the instructions of the electronic voice out of the parking garage. Driving along a narrow road in an increasingly rural setting after leaving behind the bustling city of Salzburg for 20 minutes, I began to suspect  that were being led astray, especially when the GPS informed me that I needed to enter the major highway in 300 meters, when obviously the only things 300 meters ahead of us were a huge mountain and farmland in all directions at the base of it.  After retracing our path back into Salzburg and realizing that our GPS thought we were somewhere far away from our actual location, we figured our best course of action would be to get on the first highway we could find, and hope to follow signs into Berchtesgaden.  This turned out to be one of the biggest mistakes of the trip.

As you may have heard in the media lately, there is an ongoing refugee crisis in Germany, and as a result, the border between Austria and Germany is monitored by an armed police presence that checks each car that passes the border.  In Salzburg, we hopped on the A1 (toward Munich) before realizing we needed to be on the A10 toward Innsbruck.  At almost the exact moment we realized our miscalculation, we arrive to total gridlock, in which we sat for an hour and a half, when all we needed to do was get past the border and turn around.  Though our planned 20 minute drive to Berchtesgaden turned into almost a 3 hour nightmare, we eventually found our way to our destination.

The Konigssee is probably most famous for being the home of Hitler’s vacation home, called the Eagle’s Nest, perched high above the lake on a ridge.  We took the Jennerbahn cable car to the top of the mountain that rises dramatically above the lake like a wall of rock, and had a nice wander around the snow-free trails at the top.  And what a view we had. 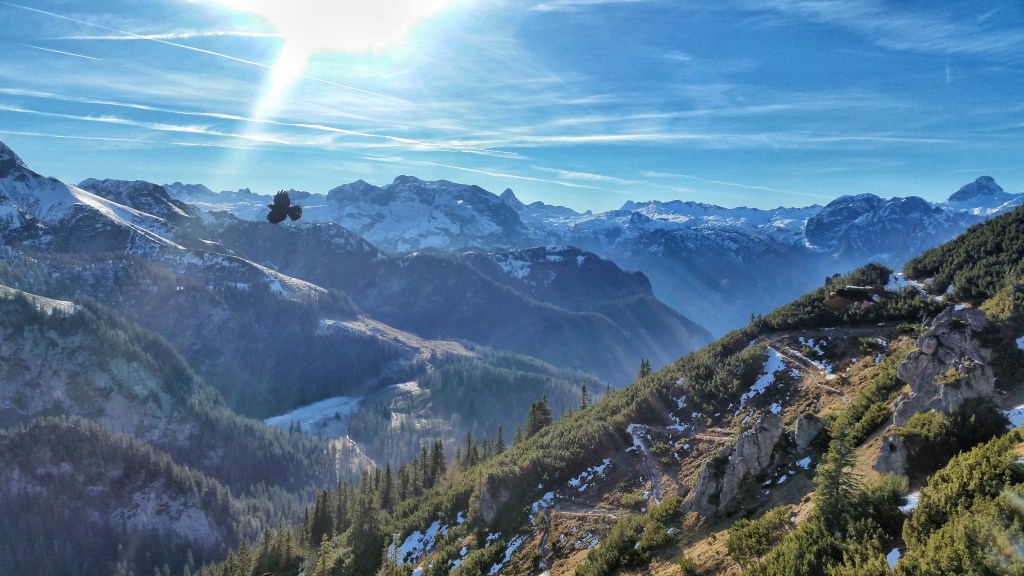 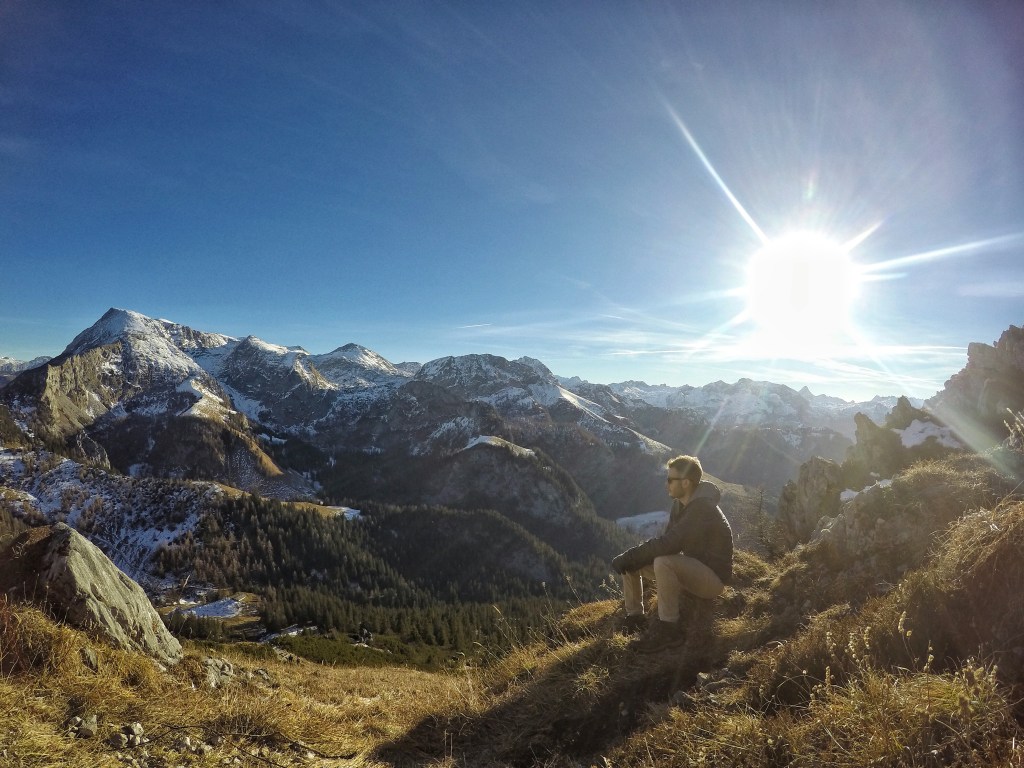 From the cable car station at the top, we hiked along a trail that wrapped around the back side of a mountain peak.  In an ordinary winter, this trail would have been completely buried in snow and inaccessible, but the summer gods were on our side this trip (thanks El Nino!). 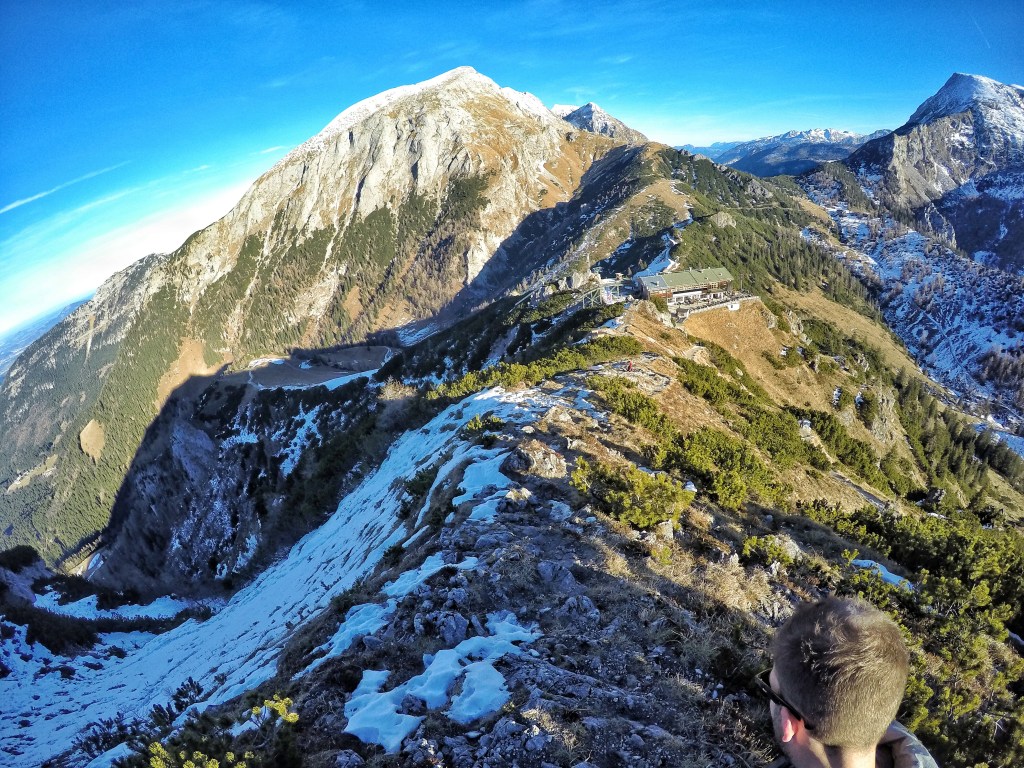 The trail led to the pièce de résistance, a view of the grand Konigssee from high above. 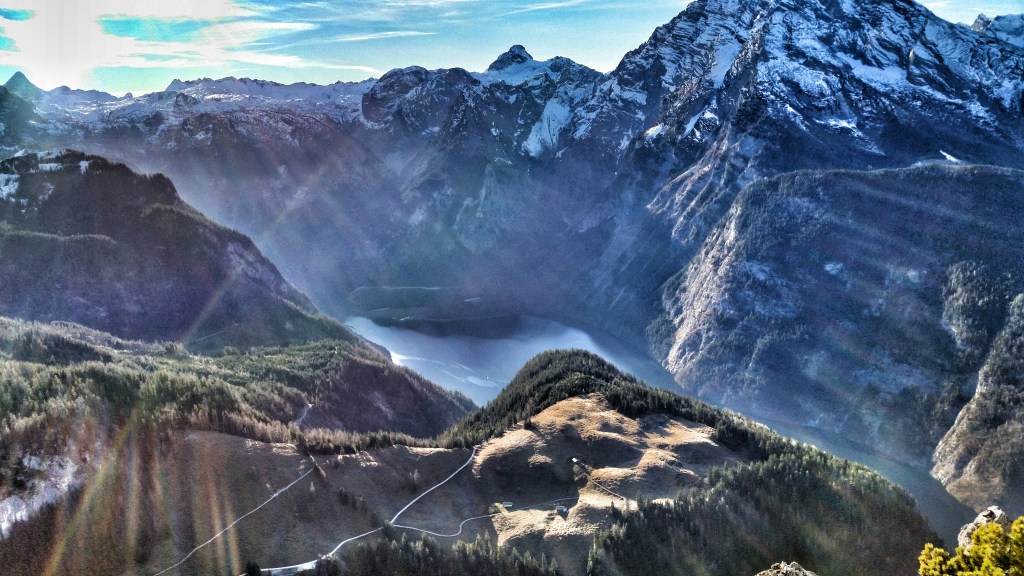 Taking the Jennerbahn cable car back down to the base, brought us to the small village nestled up to the Konigssee.  We roamed the trails surrounding the lake and found many photogenic spots. 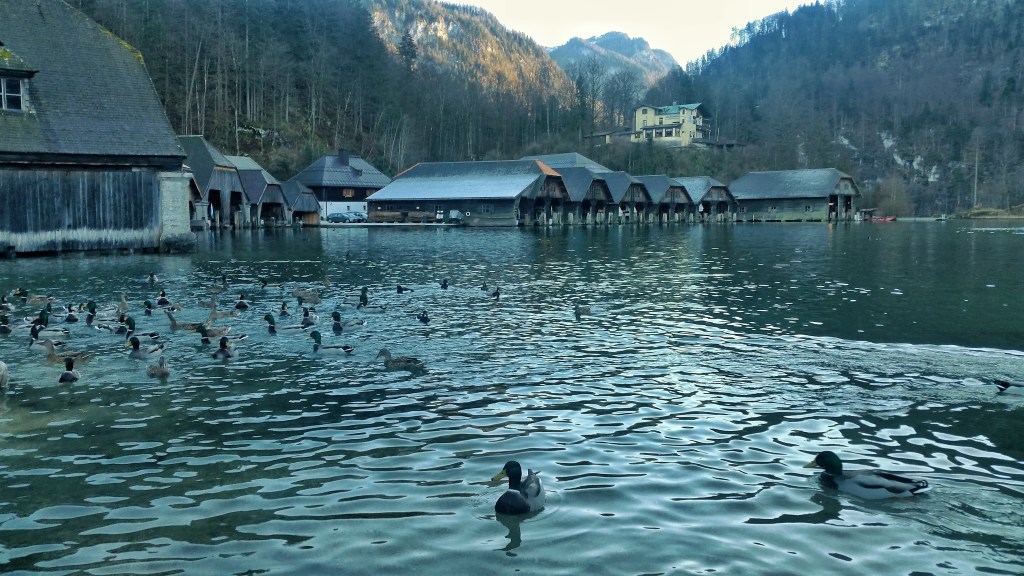 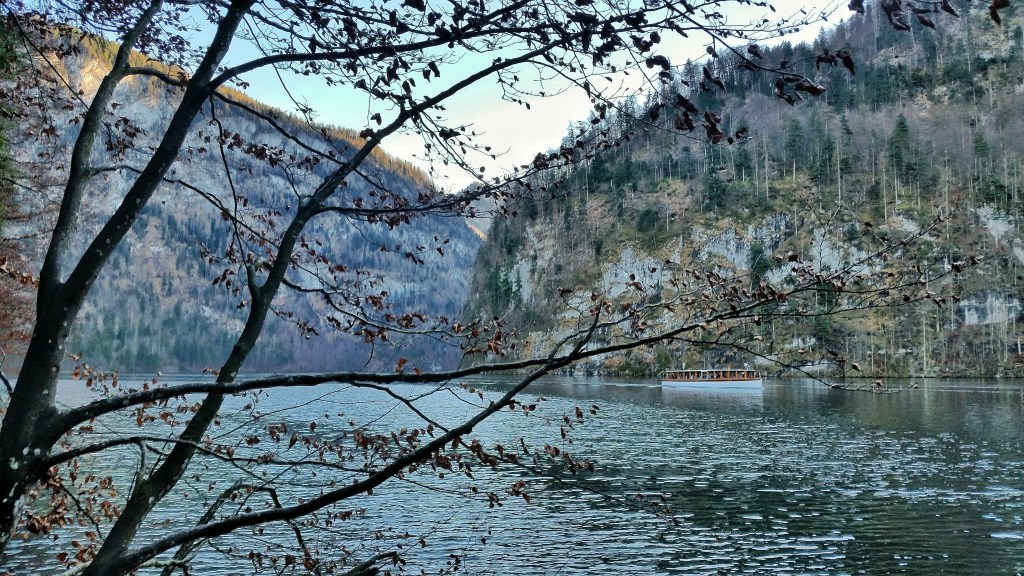 Just a few minute’s drive from Konigssee is the charming German town of Berchtesgaden.  We parked in the underground lot in the center of the altstadt, and roamed the streets, visiting the Christmas market stalls, drinking gluhwein, and wandering the narrow streets between traditional German structures. 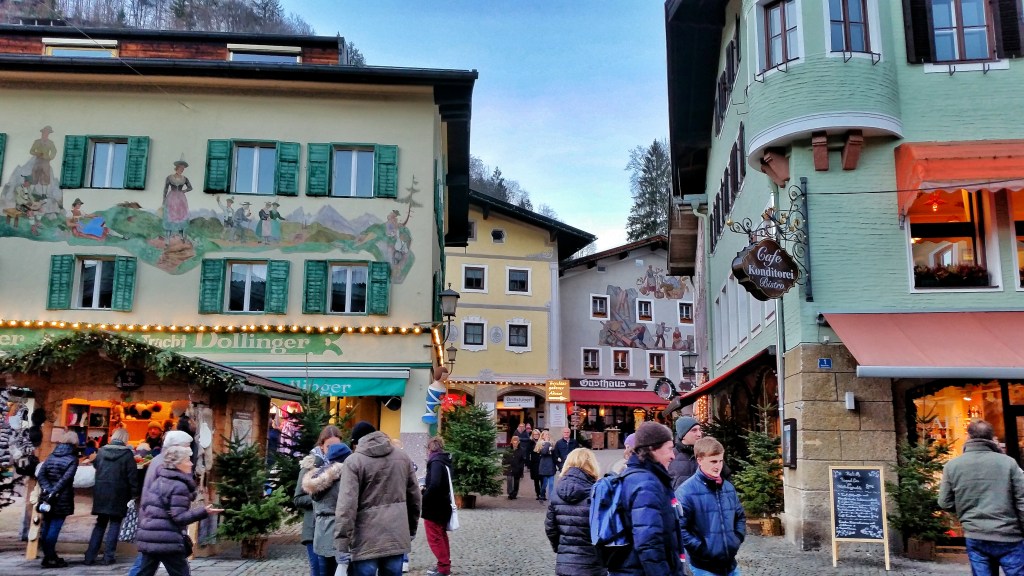 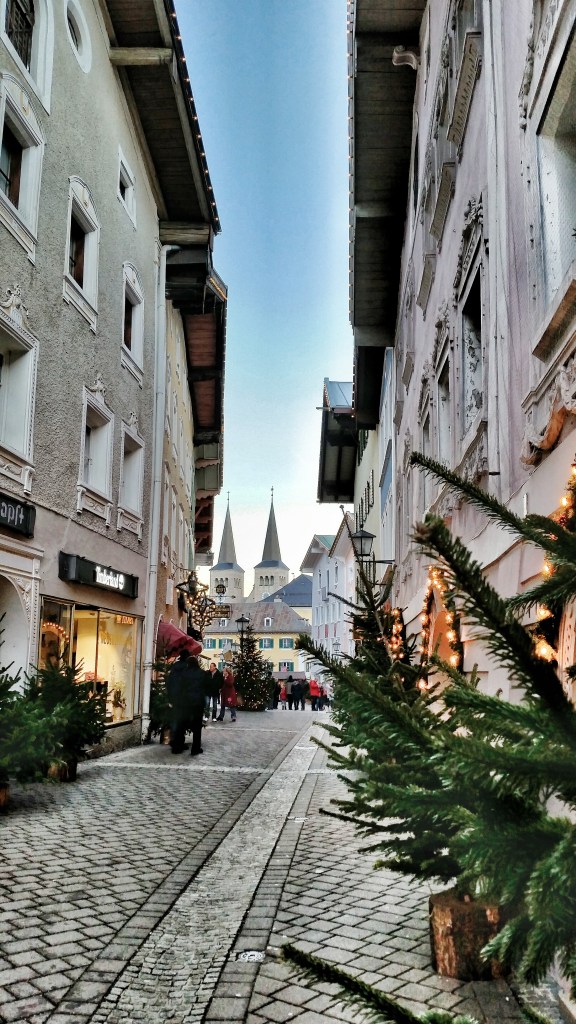 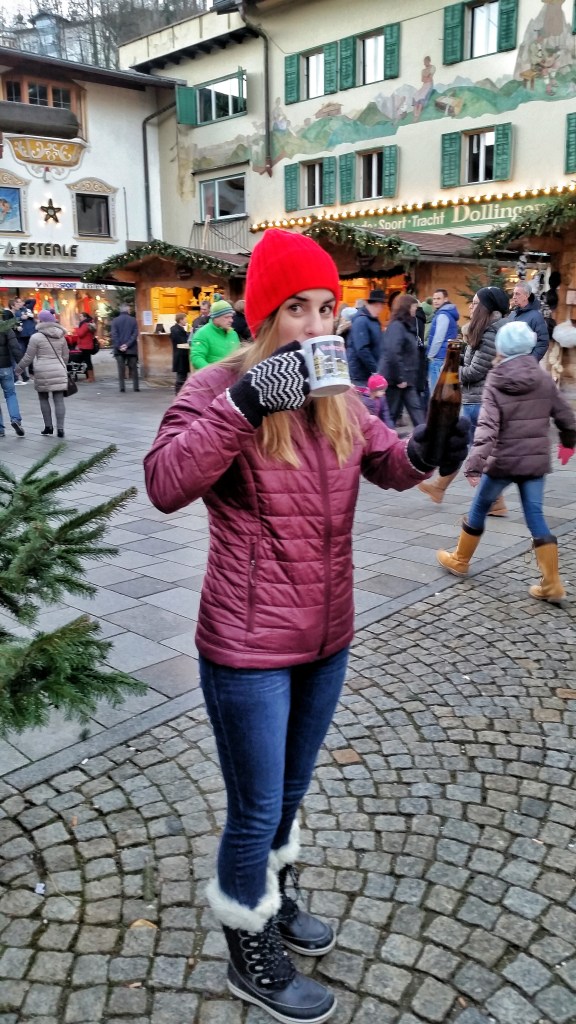 After Googling “cozy bar in berchtesgaden”, the first result brought me to the Goldener Bar.  It certainly was very cozy, with its all wood interior and traditional German decorations.  Christina and I ordered the cheese and bread plate to snack on and a couple of Bavarian beers and just enjoyed one another’s company.  All was going just fine until I cut into the grayish colored cheese wedge in the center of the plate to give it a try.  An authentic alpine mountain cheese it was.  As I brought it to my mouth, the smell hit me first.  Very pungent.  But I’m in another country, and I’m all about trying the traditional foods.  Plus, many cheeses smell awful but taste fantastic.  Take parmesan, for example – smells like feet but tastes great.  And so I assumed the same would be true with this particular cheese. “OK,” I thought “so it smells like actual human shit, so surely, as the law of smelly cheese dictates, it will taste amazing”, my flawed inner voice told me.  The moment it hit my tongue I realized that the flavor was exactly the way the cheese smelled.  So at this point, I know what it’s like to eat shit.  My face said it all to Christina, and inexplicably, she took it upon herself to pick up the wedge of cheese to give a smell – a tragic miscalculation, as the odor didn’t come off her hands for about a day and multiple vigorous scrubbings. 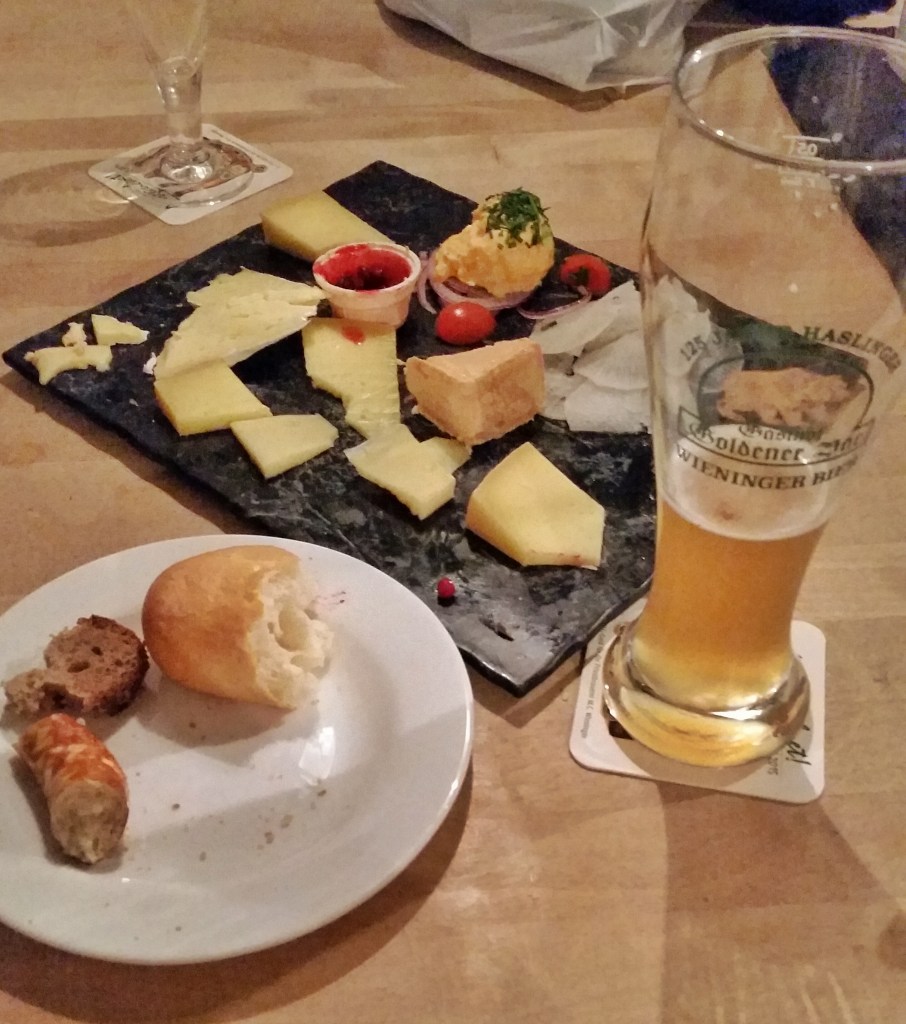 With the cheese incident behind us, we fell asleep for the final time in our wonderful Salzburg apartment before departing the following morning for Innsbruck, Austria deep in the heart of the Austrian alps, and the capital of the Tirol region.