“I think we might have to jump.  We can maybe leap onto that tree and climb down it.  That may be our best bet.”

This is the story of a rather sketchy situation in which my brother Cory and I found ourselves, atop a series of rock formations, far off the sanctioned trails of the Devil’s Head well beaten hiking paths. 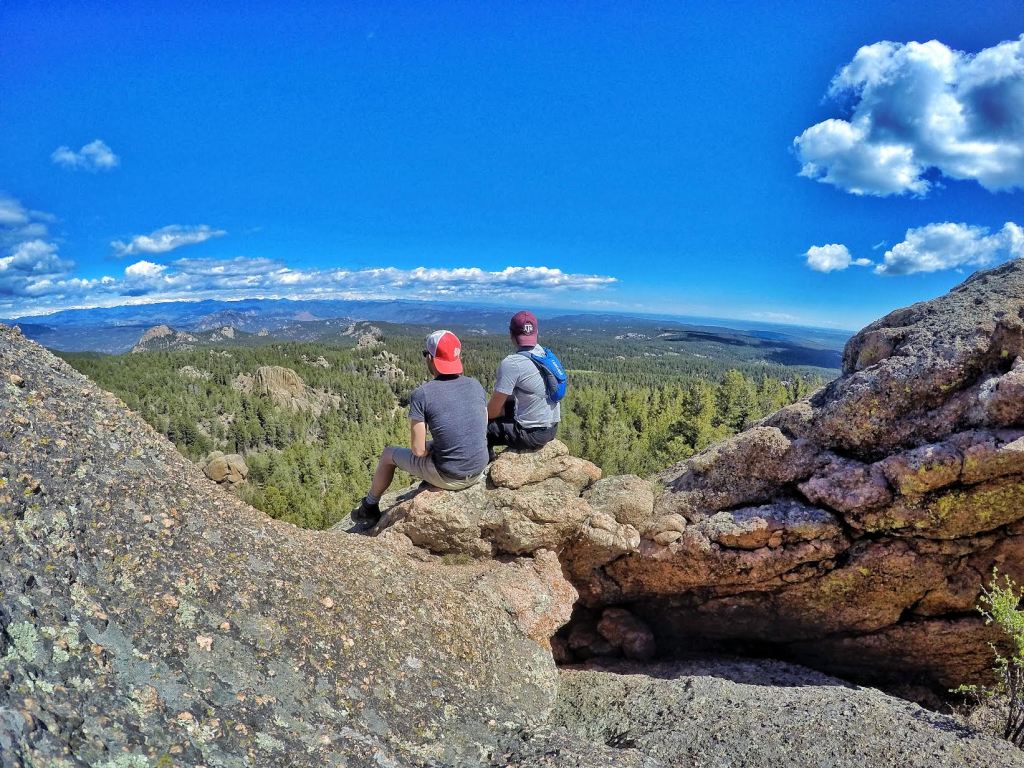 In Colorado for a quick visit over Memorial Day weekend, I had come to see my brother and his family in their new home near Denver, and to get in a bit of hiking.  From their back balcony, we had a straight-on view of The Devil’s Head, far off in the distance, perched high atop a ridge in the foothills of the Rockies.  The rock formations there are also referred to as “The Resting Indian” as it appears to be a native american lying in repose from a distance.

Cory had recently completed this hike with his family not long prior to my visit, and suggested that it would be a hike that I might enjoy as well, and so we set off together to put our boots to the path, and get in some much needed brotherly bonding time.

The trail itself is very interesting and provides the hiker with a diverse array of scenery and topography on which you can explore and take in sprawling vistas of the surrounding plains, hills, and mountains.  When we first began the trail, we passed through a forested area that had recently been leveled by an EF-1 tornado, which to be quite honest, I had no idea even occurred in this part of the country. Just past this area we emerged into a forest of beautiful Aspen trees with their characteristic white bark. 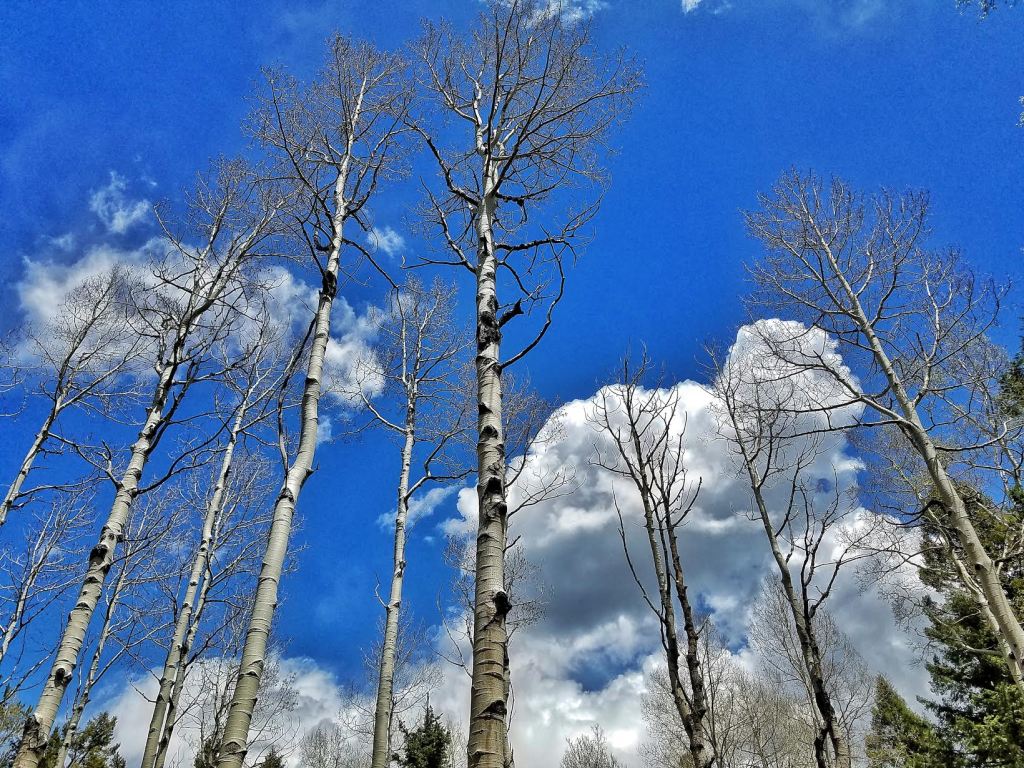 Carrying on, we arrived to some switchbacks that gave us some quick elevation gain.  With Cory being much more accustomed to the altitude than I was, he was definitely giving me a work out trying to keep pace with him as I huffed and puffed with my oxygen starved lungs.  Eventually I adjusted a bit, helped out by multiple viewpoints along the way in which I could take a quick breather and soak in the expansive views. 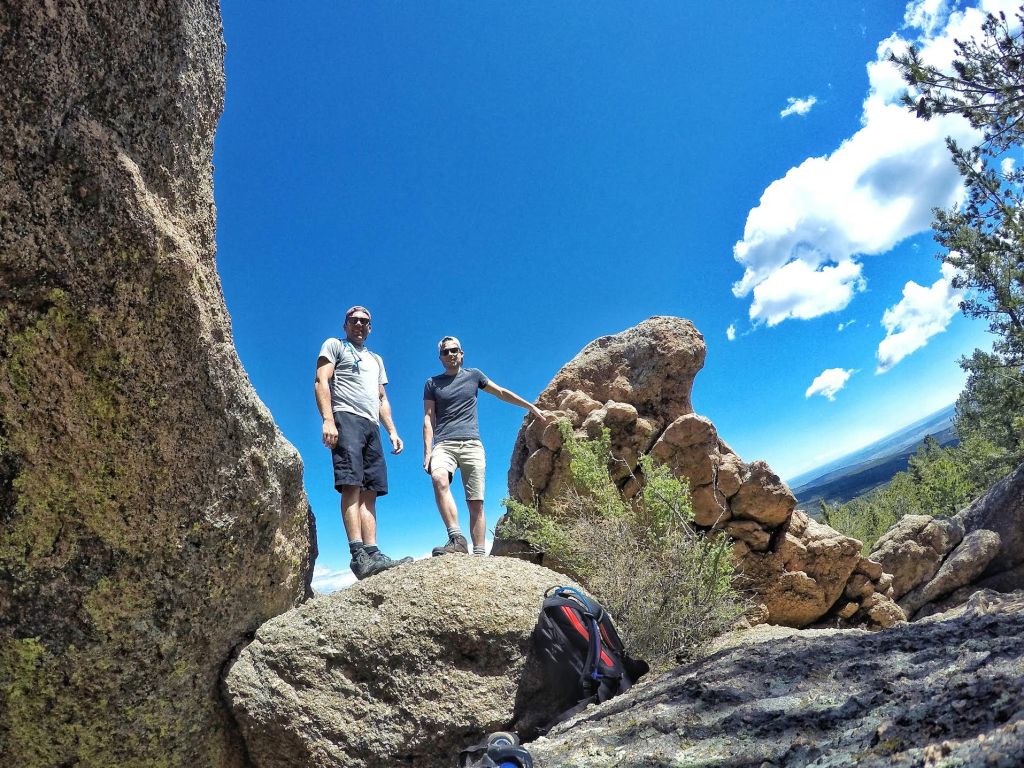 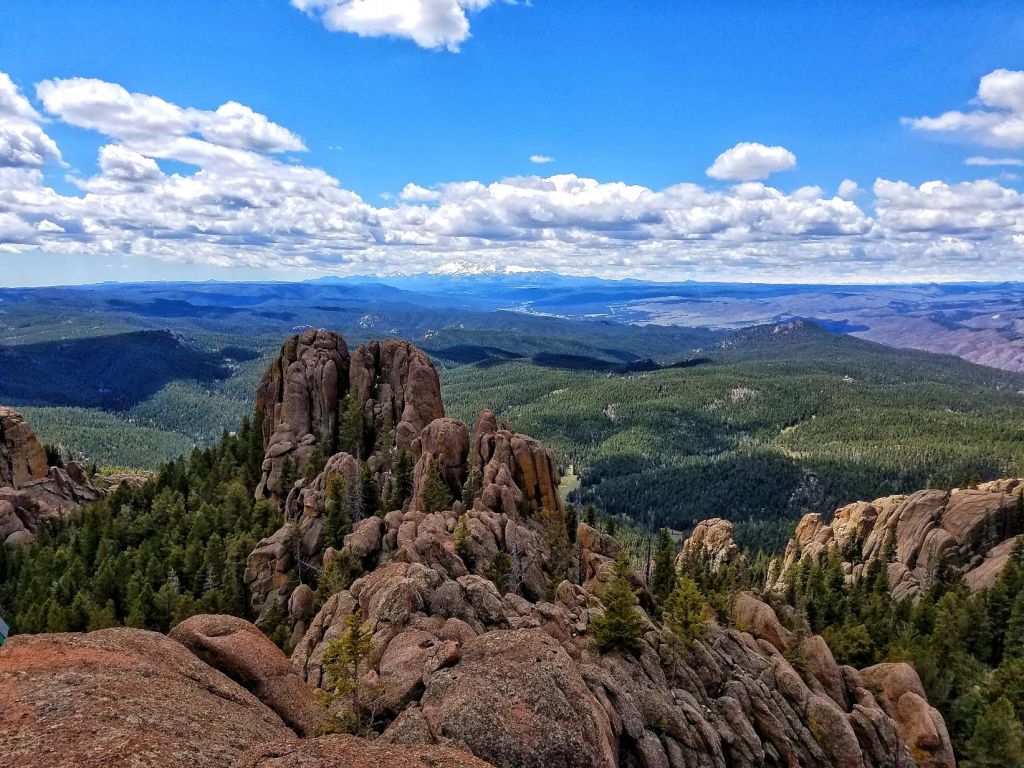 At this point, we stumbled on the biggest human shit I’ve ever seen, just feet off the path, with a couple of dainty napkins artfully placed on top of it.  With this being a pretty busy trail, I had to wonder how the deuce dropper found a second of privacy to bless the trail with his leavings.  While the napkins were a nice effort to conceal the abomination, the effect was more akin to trying to hide a beached whale by throwing a dish rag on it.

At the apex of the trail, we arrived to the fire lookout tower, with its numerous steps that lead to the top.  Once there, we were treated to 360 degrees of stunning mountain scenery.  We laid down our packs, pulled out our peanut butter and jelly sandwiches, dangled our feet over the edge, and took it all in for a little while. 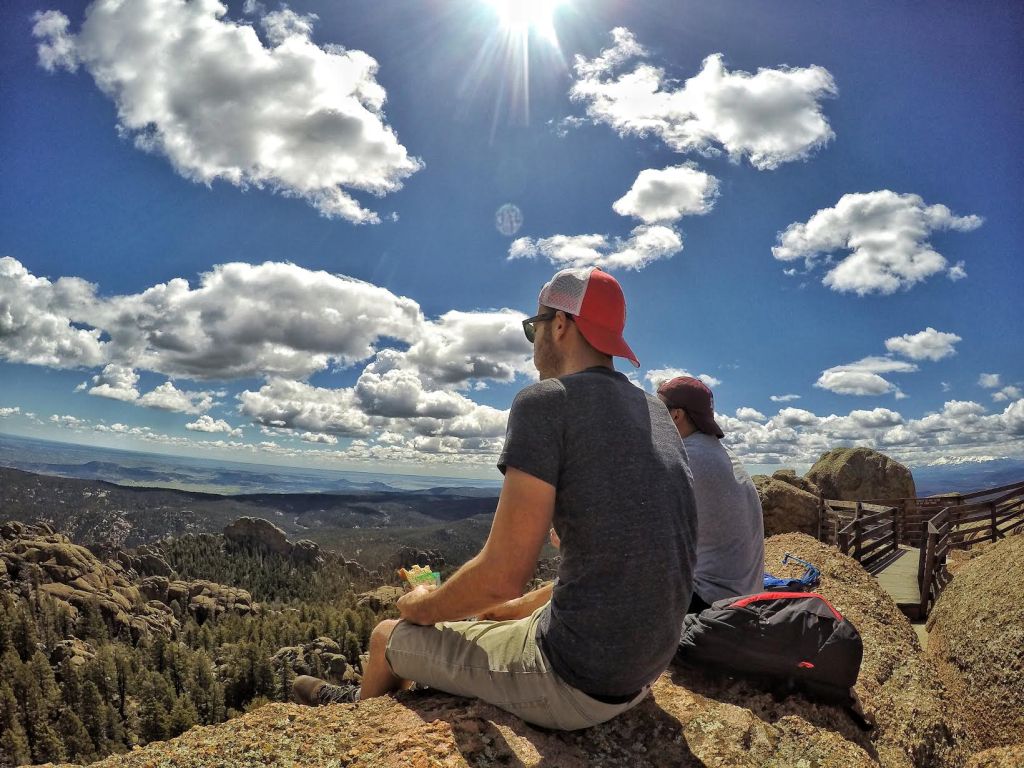 These were the kind of views that constantly draw me to mountainous destinations.  To me, there is nothing better than getting as high as possible off the ground.  I’ll take a mountain over a beach any day.

From this point, you would typically retrace your steps back down from the way in which you came, as this is an out-and-back trail.  As we began the trek back to the trailhead, however, we were both intrigued with the naturally carved rock formations just off to the side of the trail, which towered over the trees far below.  Cory and I both seemed to have the same idea, and I don’t think any words were even exchanged before we found ourselves climbing onto the rocks, seeking safe paths to reach the farthest point we could see, which looked to offer an incredible view. 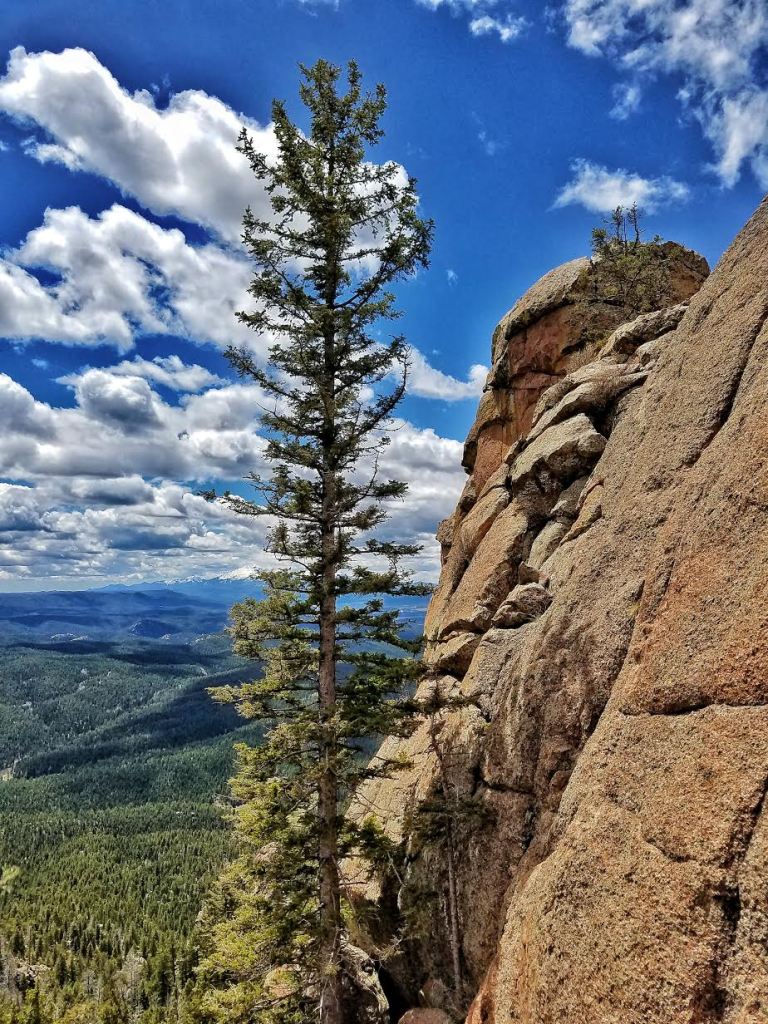 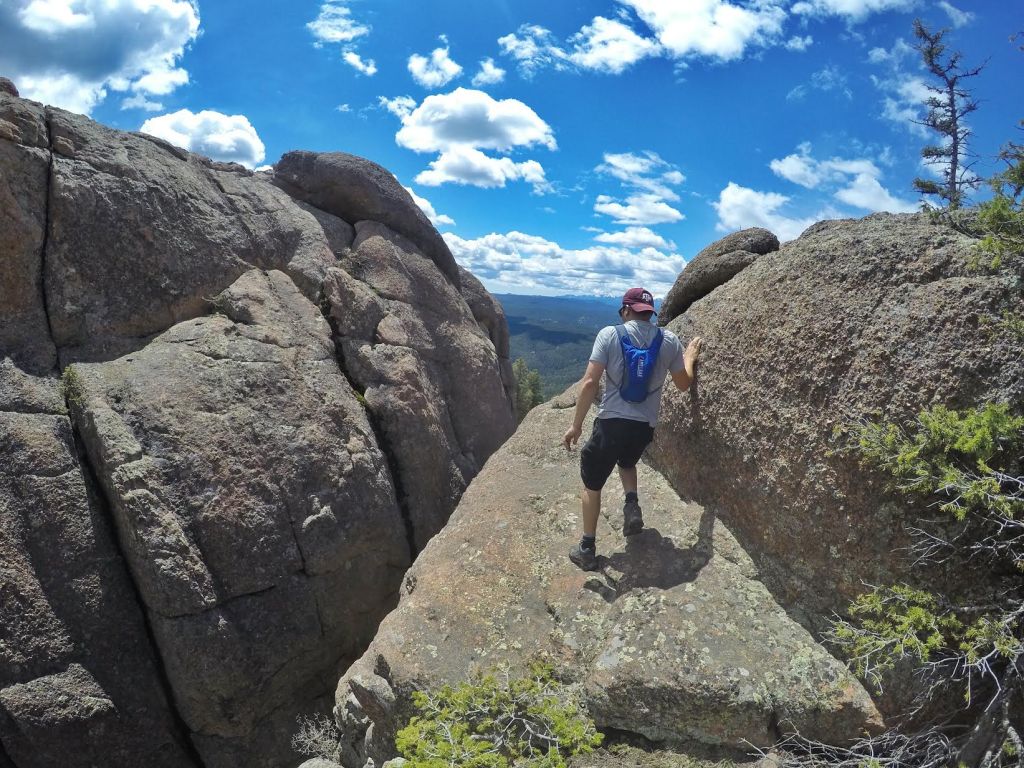 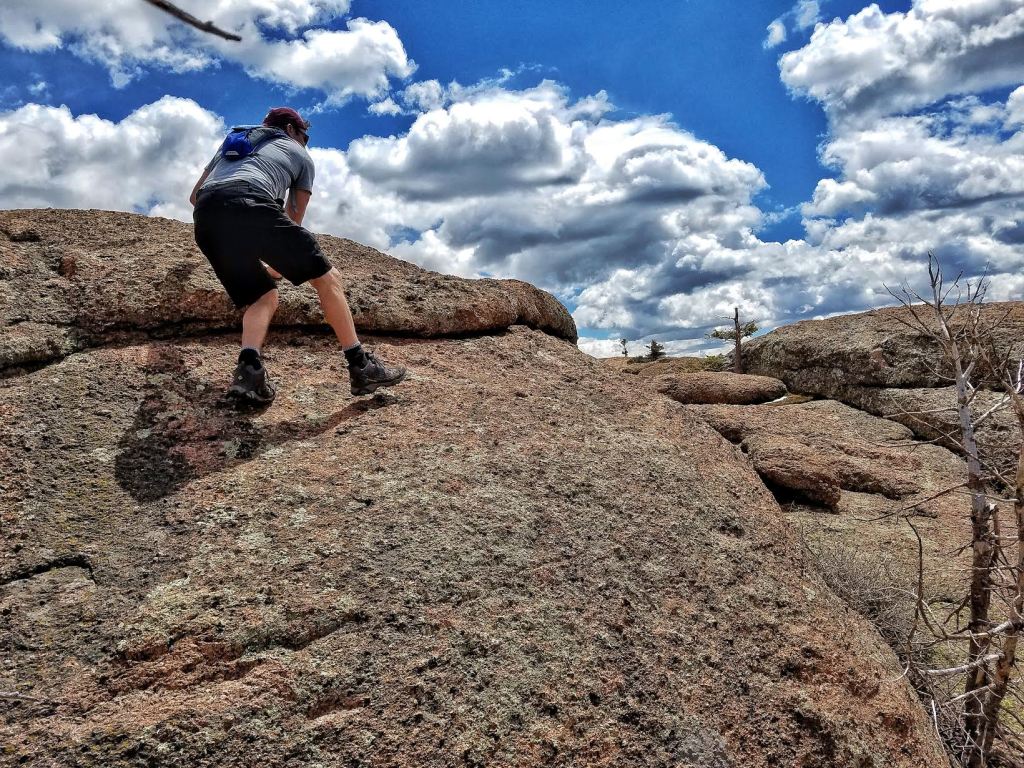 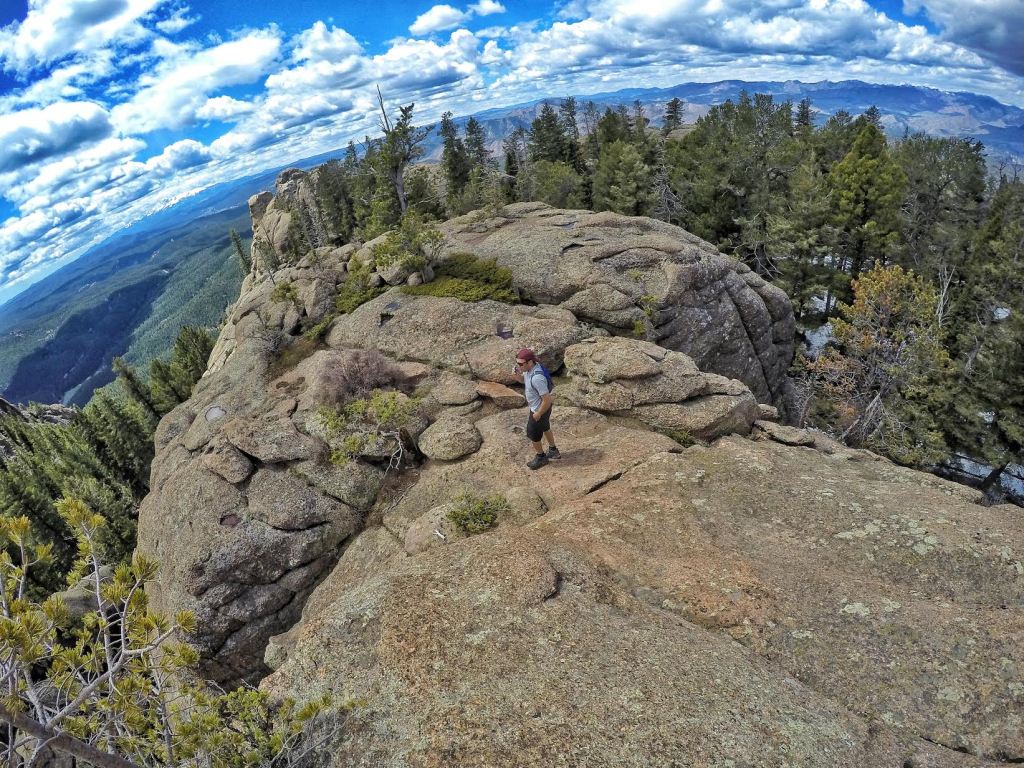 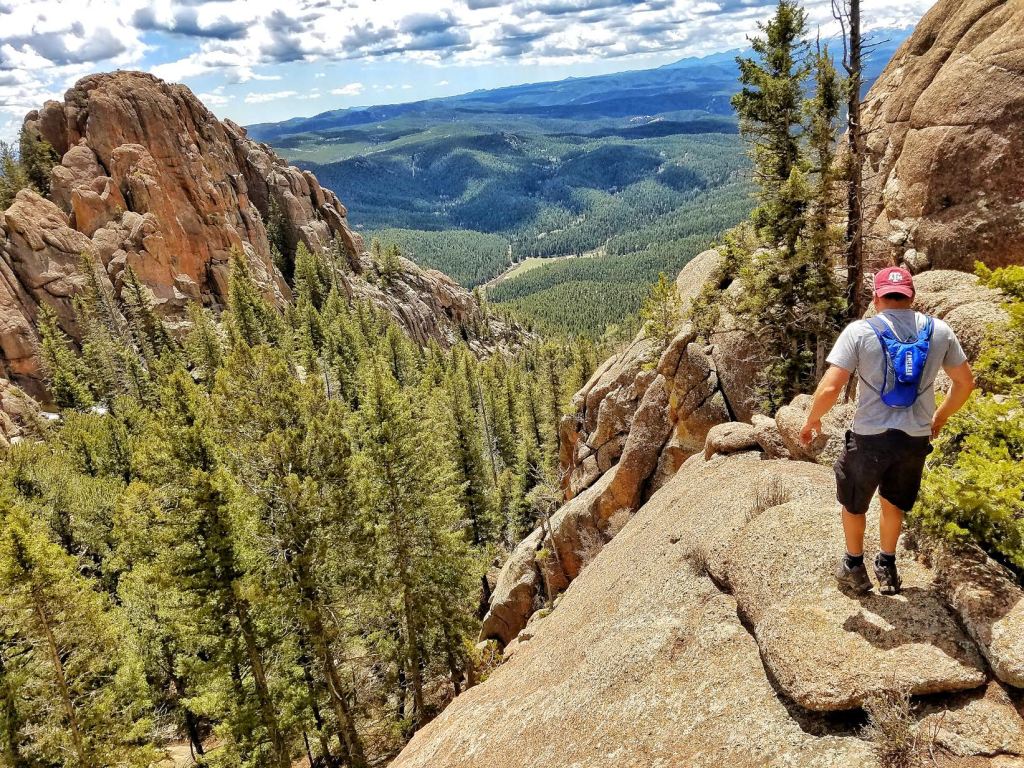 Finally arriving at the furthest point to which we could feasibly stand, we congratulated ourselves by taking in some of the most spectacular scenery I’ve ever laid witness, and marveling at our ability to have made it this far.  At this point, we hadn’t given much thought to how we were going to get back to the trail.  We were more at an in-the-moment thinking pattern, future be damned.  Surely, we thought, we can just retrace our steps to get back from where we came.  At this point though, all that mattered were those views.  Totally worth the effort and danger to get to this point. 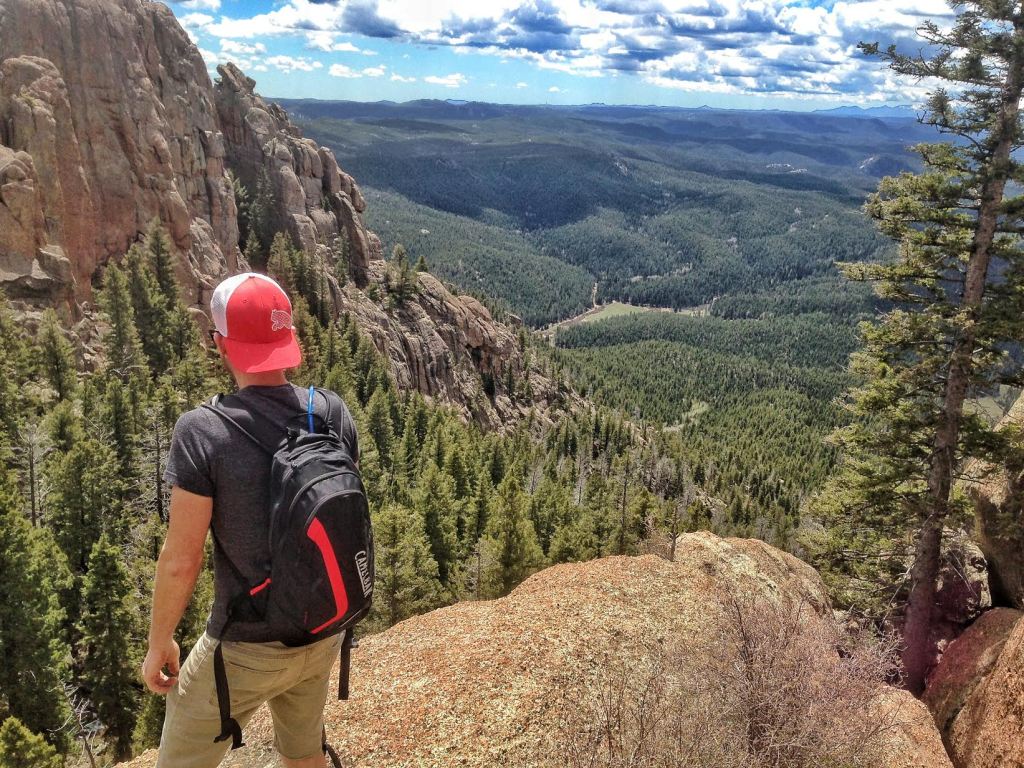 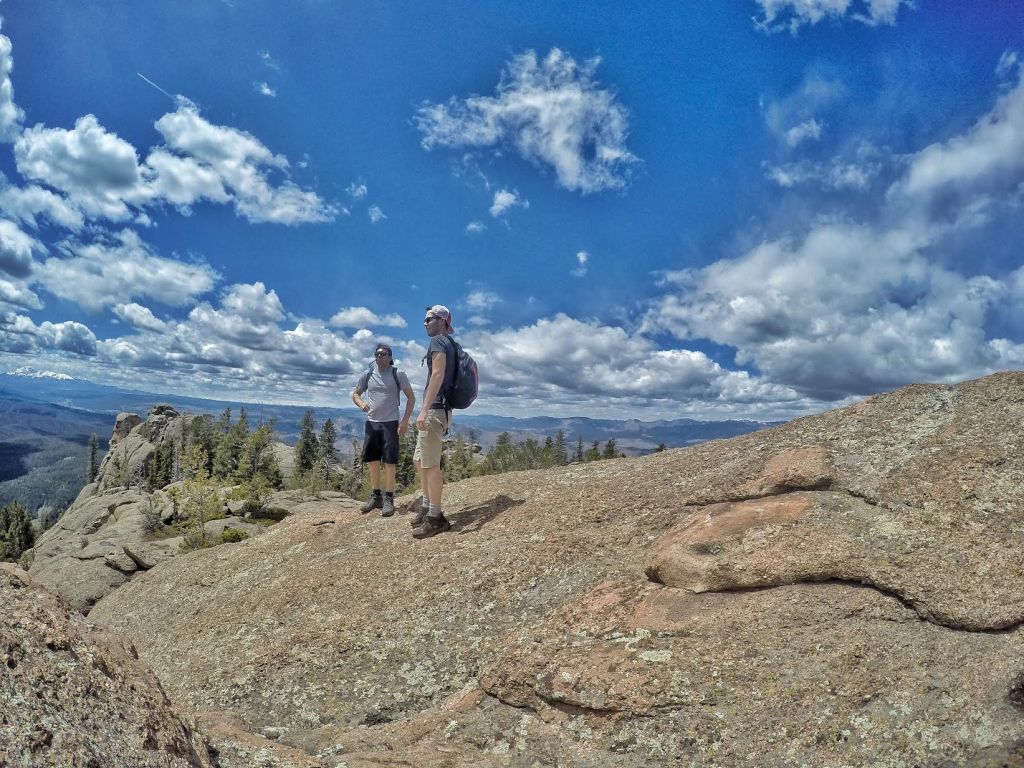 As we surveyed the situation, it definitely seemed a lot more treacherous to return from the same way we had come from.  A lot of the reason was that on the way out to the edge of the rocks, much of the climbing was down, which would have been much easier to pull off than climbing back up.  Along the way, there were numerous crevasses between rock formations, and we felt we were better off making our way down into one, getting back to tree level, and walking back to the trail at the base of the rocks, rather than risking climbing high above the ground on unsanctioned areas. 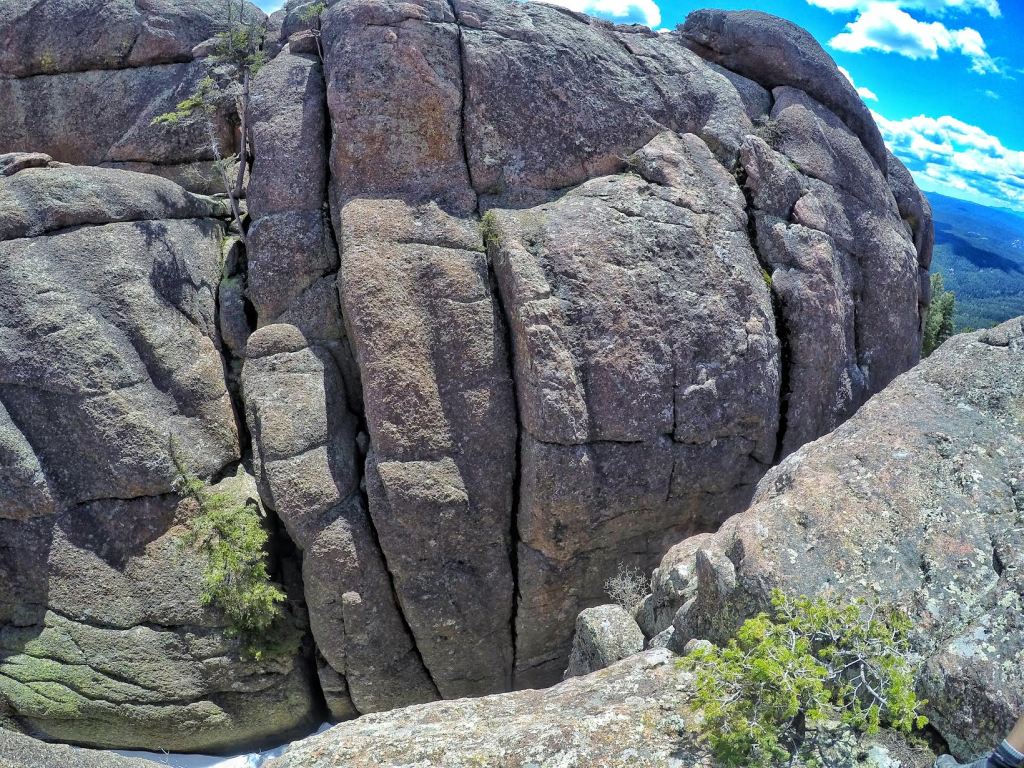 We scrambled our way down off the rocks and squeezed our way through the tight space between 2 of the rock formations of which we had just come down.  “The Narrows” as we referred to them at the time. 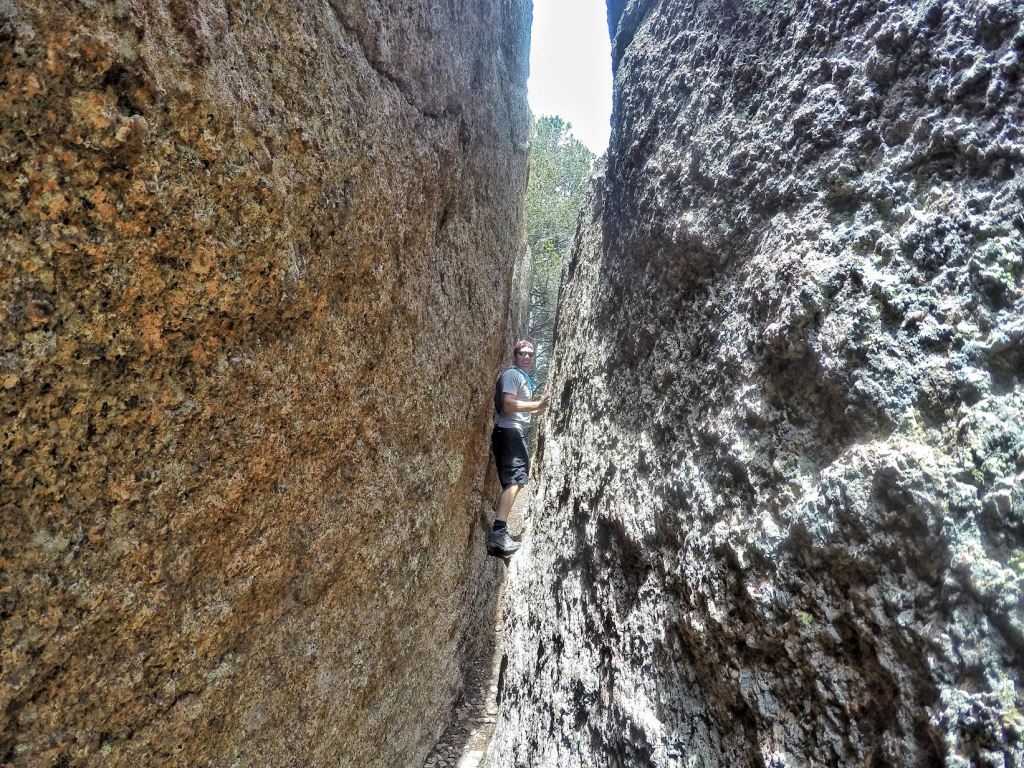 We emerged from the narrows into a forested area.  We stayed close to the base of the rocks from where we had just descended and followed them around, hoping to meet back up with the sanctioned trail.  As we walked further along, it began to be obvious that we might have been going in the wrong direction.  In the distance we could see storm clouds approaching, and the wind had begun to pick up.

It was at this point my mind began to wander.

“How much water do I have left in my CamelBak?” I thought.

“How long will a Kind Bar tide me over if I’m stuck out here all night?”

“Are there bears in this part of the country?”

We decided the best course of action was to try and backtrack from the direction we had come.  This involved doing some serious rock climbing back to the top of our trusty rock formations.  As we searched for our “Narrows”, we came up empty.  “Great”, I thought.  “We’re definitely spending the night out here.”  We began climbing back to the top of one of the rocks, and upon arriving at the top, realized that this was not the same formation we had been atop previously.  We also realized there was no obvious way off of it, and suddenly snowflakes began to whiz past my face.

What had been a jovial brotherly trek suddenly got my adrenaline pumping as I stood atop a rock, hundreds of feet above the ground, wind blowing snow around us, with seemingly no way to safely get back down.  We quickly surveyed the situation looking for a fast and safe way to get back to ground level.  It seemed our only option was a lonely and pitiful tree that had grown up in the crevasse between two large rocks.  After sitting at the edge and trying to determine how badly I might break my ankle if I made the drop down, Cory had a suggestion.

“I think we might have to jump.  We can maybe leap onto that tree and climb down it.  That may be our best bet.”

Before we attempted this daredevil feat, I made another quick round at the top of the rock, looking for any way that we might get back to safety.  I noticed a very narrow ridge, that wound around the back of the rock.  With adrenaline coursing through my veins, I didn’t even think twice before bounding onto it and following it to wherever it might lead me.  I called Cory after me, and he followed.  I crawled through a tight tunnel beneath a fallen rock.  I slid down a sheer rock face.  I scooted myself along a narrow ridge, and finally emerged around a corner where I saw a power line.  As we rounded the corner, the trail came into view, and we realized we had made our way back into safe territory.

I think at that point we both started laughing.  Mostly out of complete relief.

Sure things got a bit sketchy there toward the end, but I have to admit that it was an absolute joy forging our own path and working out the best ways to navigate our way to amazing views.  It was a tremendous bonding experience between brothers, and at the end of the day, we were both glad we had done it.  Life is not always going to be safe, and sometimes it feels good to live a little bit dangerously.  At the minimum, we got a good story out of the adventure, but more than that, we had a great time sharing in our mutual love of being outdoors. 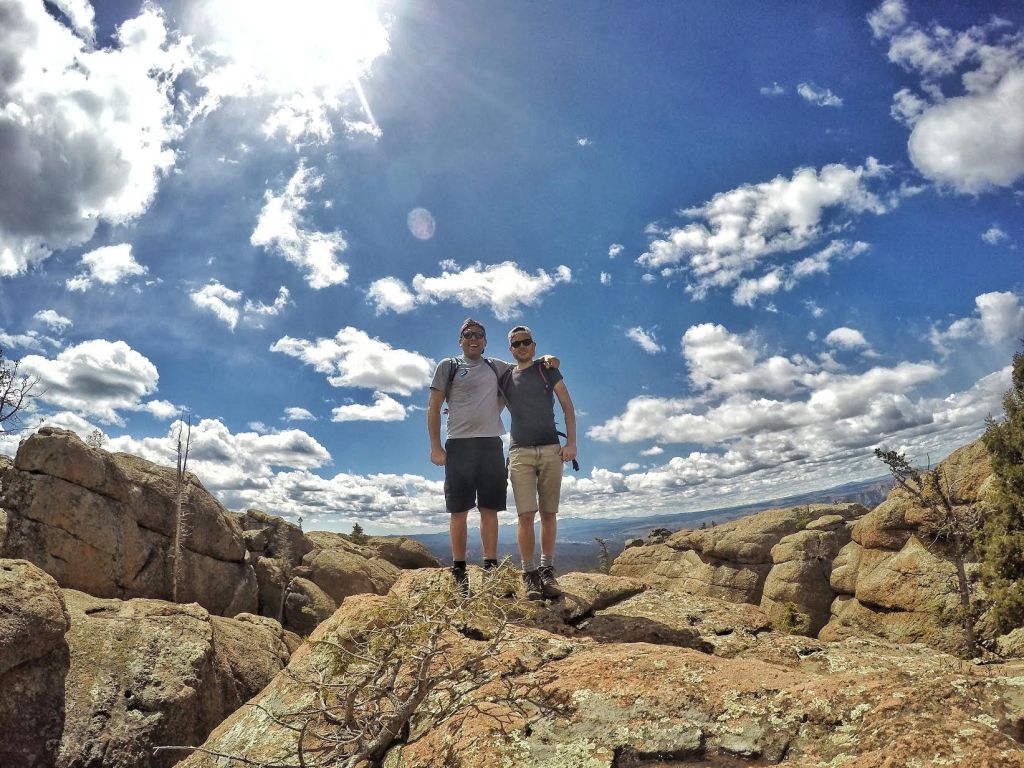