The Snæfellsnes peninsula is like a microcosm of the entire country of Iceland.  If one only has a few days to explore the country, they would be well advised to spend that time here to get a good idea of what the rest of the country has to offer.  From volcanoes, glaciers, ice caps, lava fields, hot pots, beaches, fjords, mountains, and waterfalls, there is no shortage of sights to behold in a relatively small little peninsula.

We opted to spend two days on the peninsula, spending the first day exploring the southern part, and basing ourselves in the tiny village of Hellnar, and the second day exploring the northern section, with our base being Stykkisholmur.

We departed Hveragerði early in the morning since I had a full day of activities planned.  After driving through a lengthy underwater tunnel and emerging in the town of Borgarnes, we arrived on the peninsula.  Our first stop was to hike up the volcanic caldera called Eldborg. 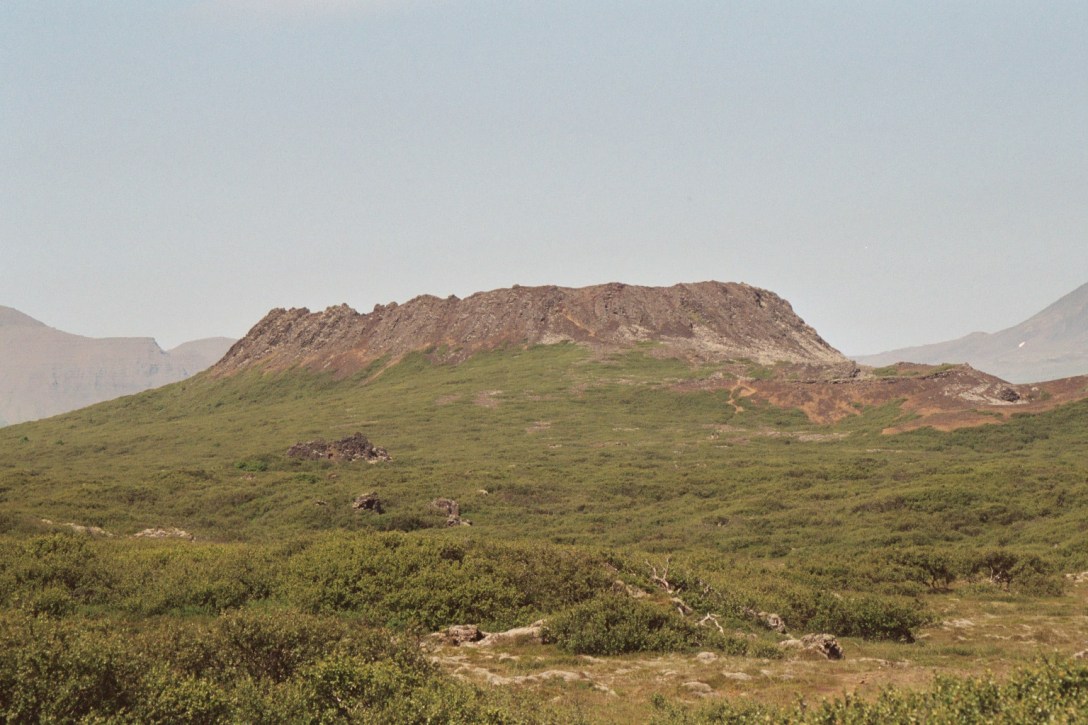 The hike to Eldborg begins with an hour long hike through grasslands, brush, and large chunks of volcanic ejecta.  Everything is very flat for the first 45 minutes or so, and then you reach caldera, suddenly rising dramatically from the earth, where the near vertical ascent begins.  As you approach the rim of the volcano nearing the top, there are chains to assist you in pulling yourself up. 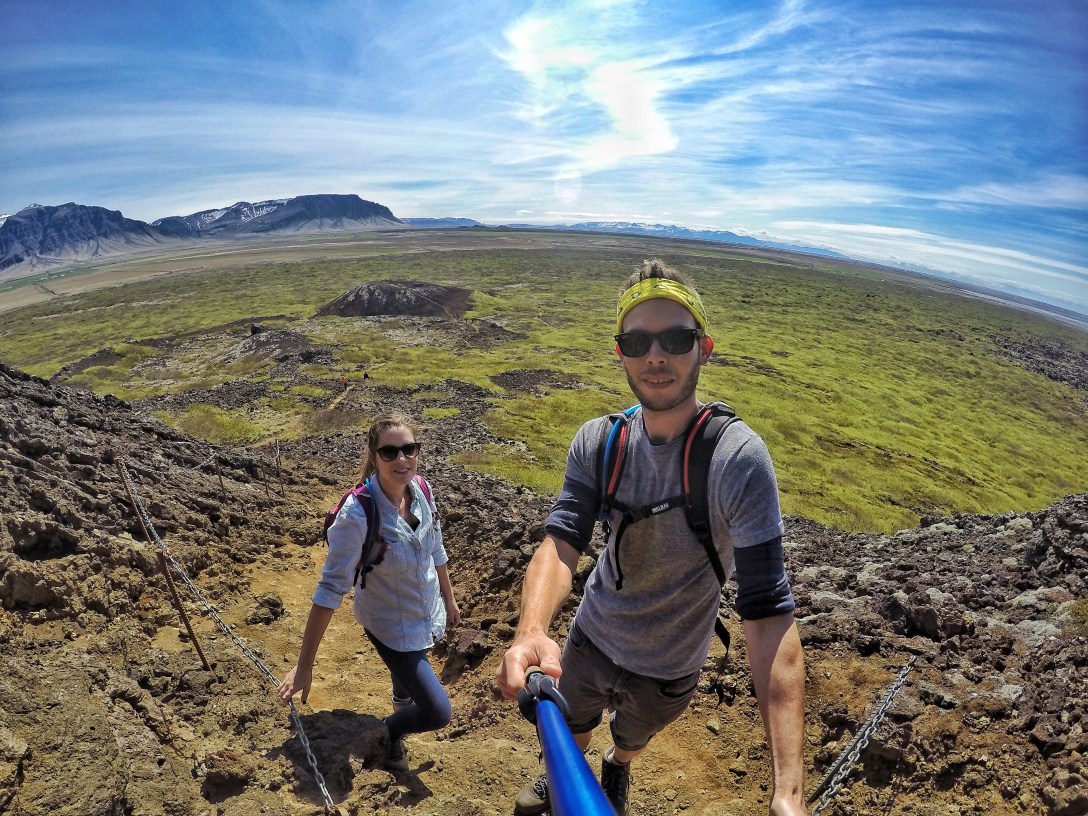 Once you reach the top, you are greeted with the massive open maw of a now extinct volcano, with a vertiginous drop a couple hundred meters straight down into the crater.  I had to sit down after getting my first look at it, scraping my knee wide open in the process on the sharp lava rocks. 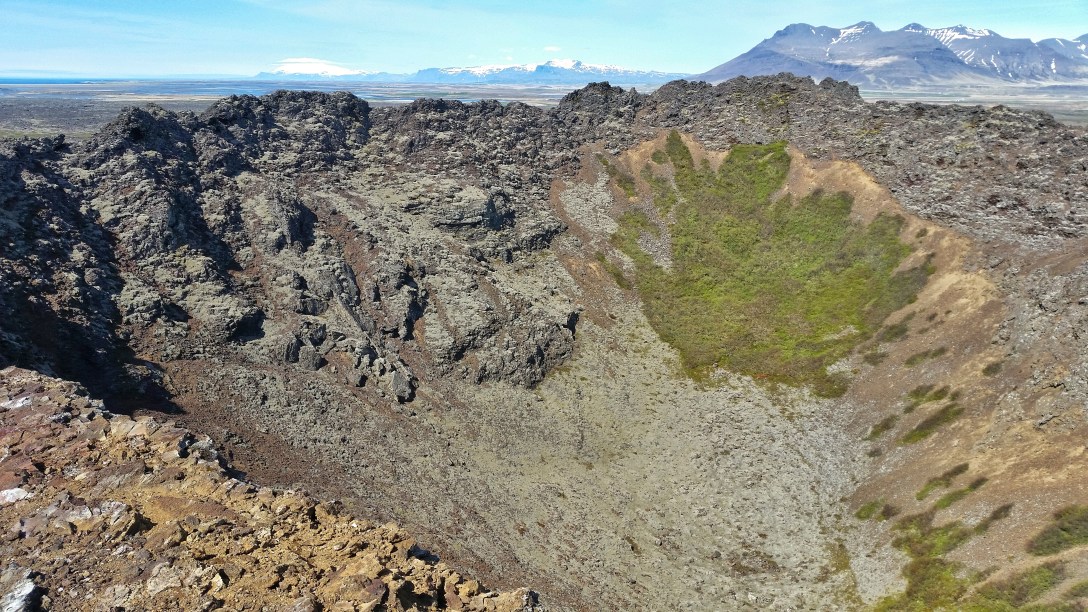 We spent a little bit of time gazing into the massive crater and looking out at the lava fields surrounding it before climbing back down for the long boring walk back to the starting point of the trail.

I had read on a blog prior to our trip about a little hidden natural hot pot very near to Eldborg, that if we were lucky, we might just have all to ourselves.  We set out to locate the little hot pot, called Landbrotalaug.  All we had were some vague directions, like – look for the old farmhouse on the hill, turn by that, drive down the dirt road, etc. etc.  Nothing too specific.  It took us quite a few tries before we finally determined which one of the dozen or so farmhouses was the “old one on a hill” and found the spot.  Unfortunately there was already a couple of people in the hot pot, and because of it’s small size, it only holds about 2 people at a time, and there was already another couple waiting nearby for their chance to take a dip.  Totally not worth the wait, we decided, and so we moved on.  The little excursion was not a total waste of time, as we stumbled upon these abandoned farmhouse ruins, that were now inhabited by sheep.  There was one particular sheep that was not too happy about our intrusion and was angrily baaaaaah-ing at us from across the stream. 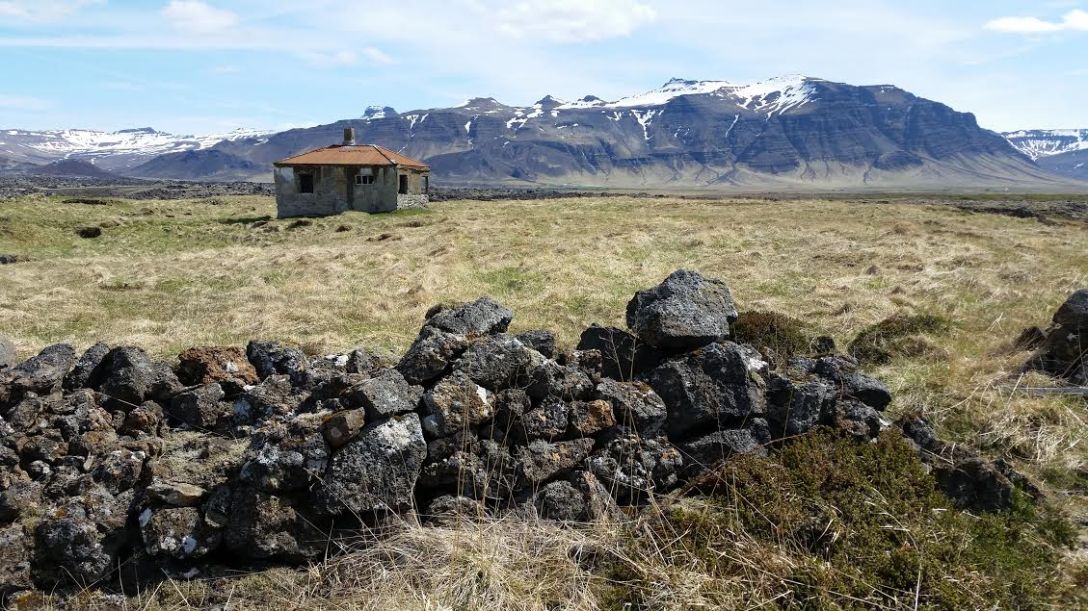 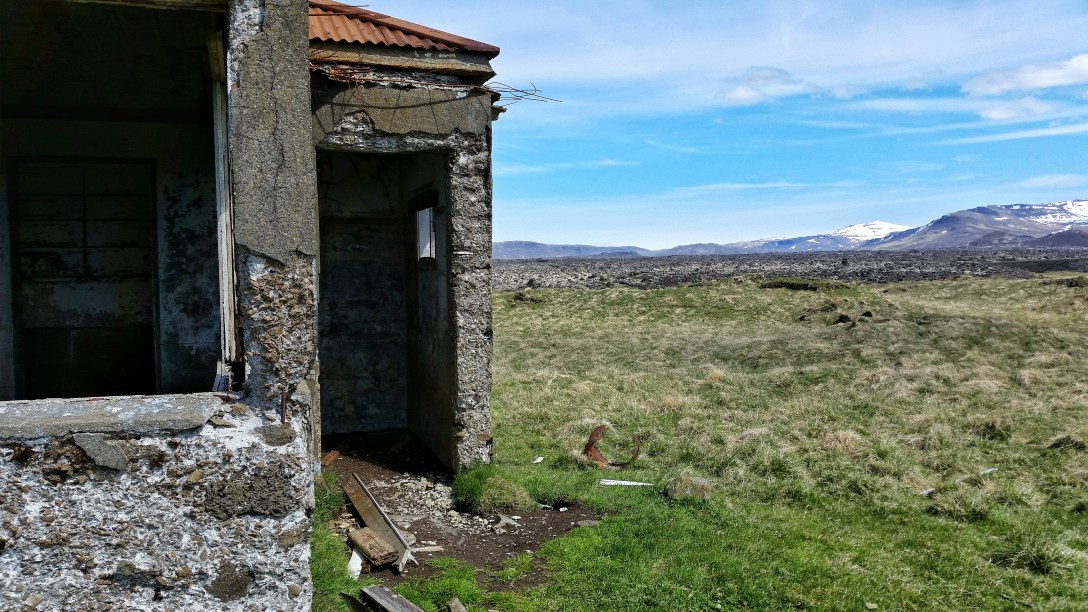 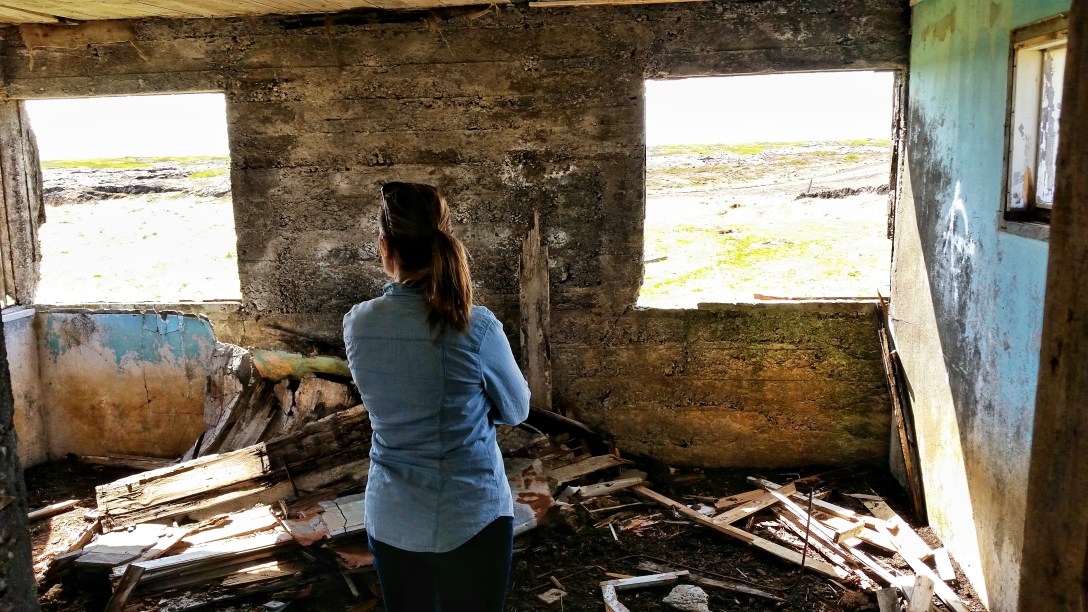 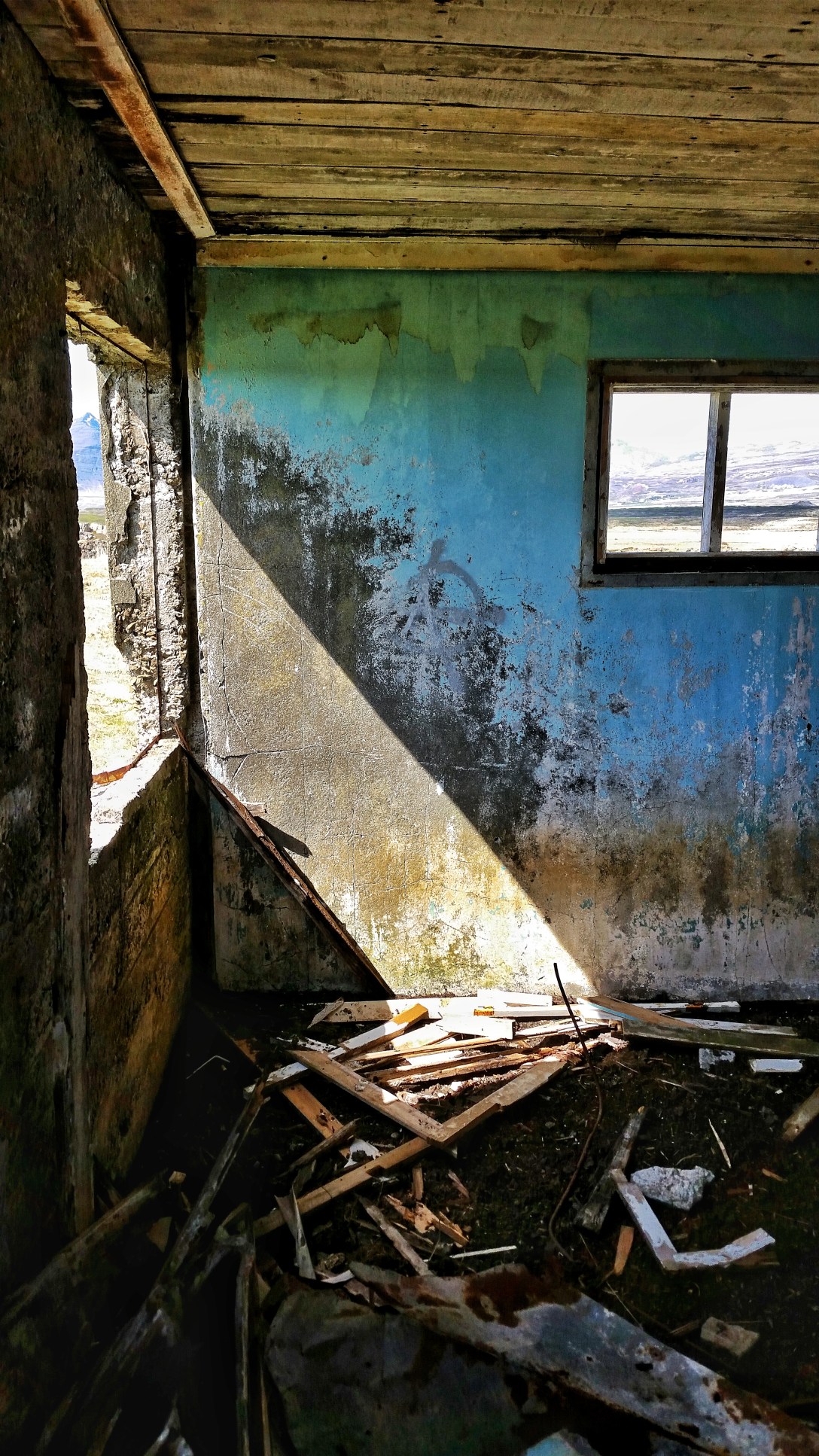 Looking out the windows from inside this farmhouse, whoever once resided here had some amazing views from their kitchen and common area! 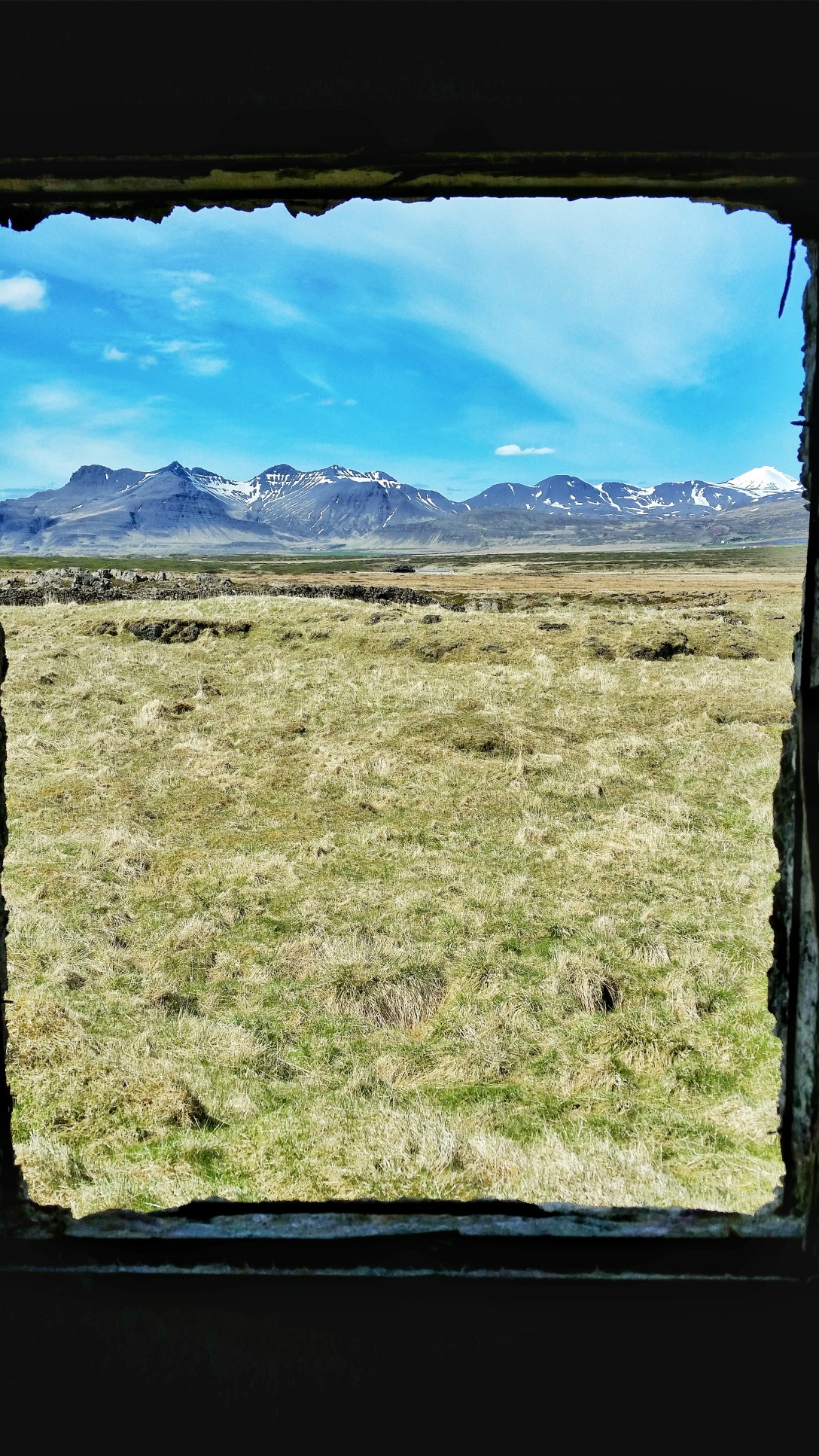 Our next stop was at the Gerðuberg basalt columns.  These were hexagonal shaped columns formed from rapidly cooling lava.  It almost looks like a man-made formation, and it was quite striking to gaze upon in person.  They were quite grand. 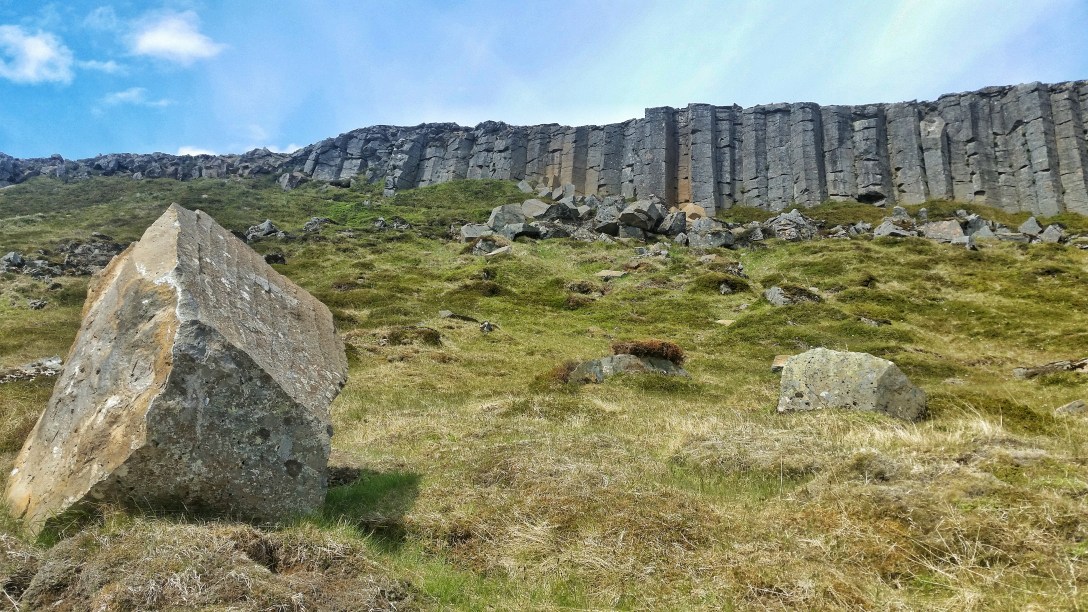 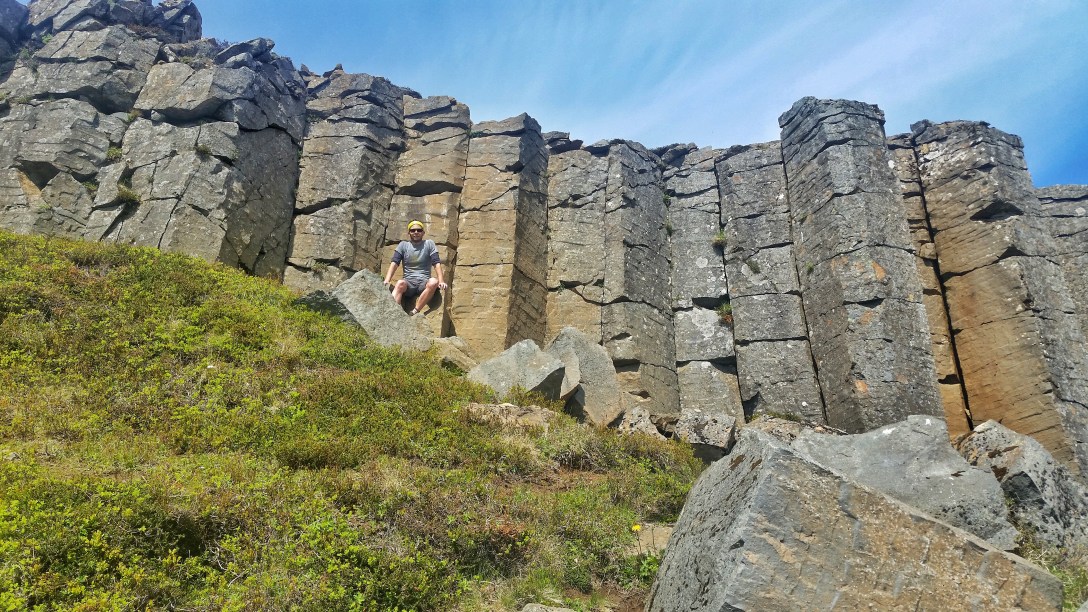 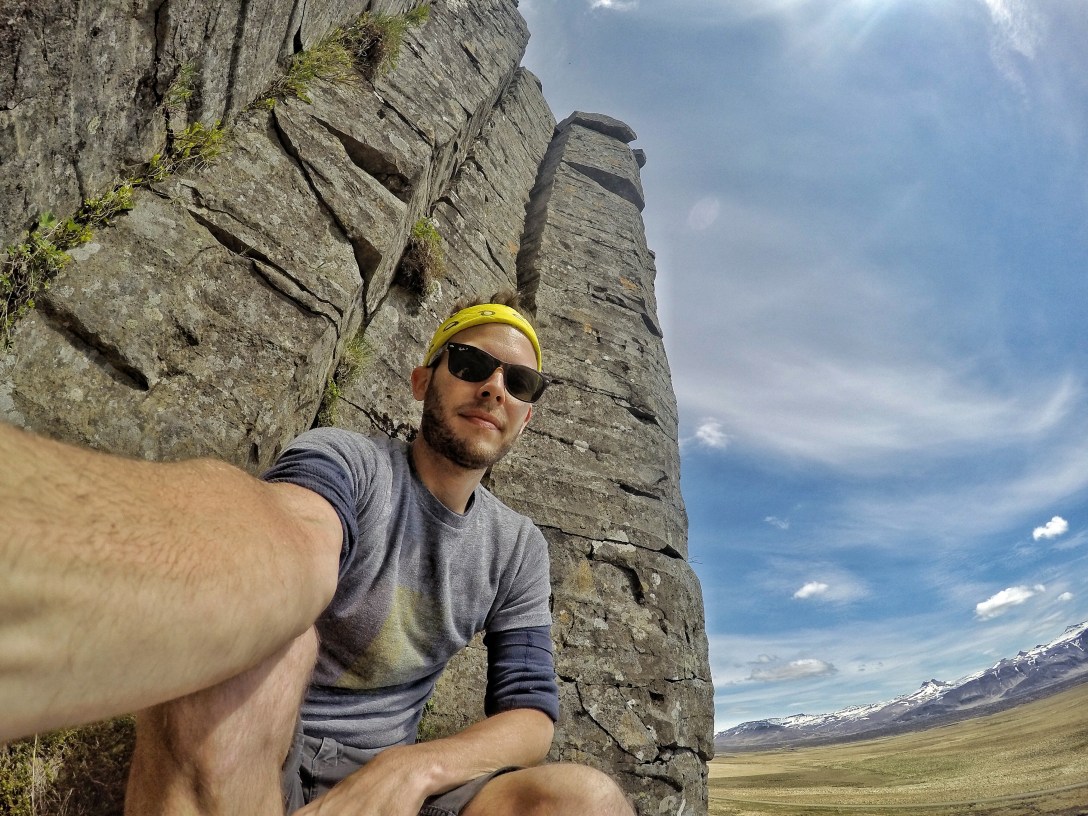 I had a fantastic time playing around on these things, feeling like a giant 10 year old as I climbed, jumped and ran around the area.  We were the only ones around, so I felt quite free to act like a complete fool.  On the way back out to the main road, we came across some Icelandic cows that were very interested in us. 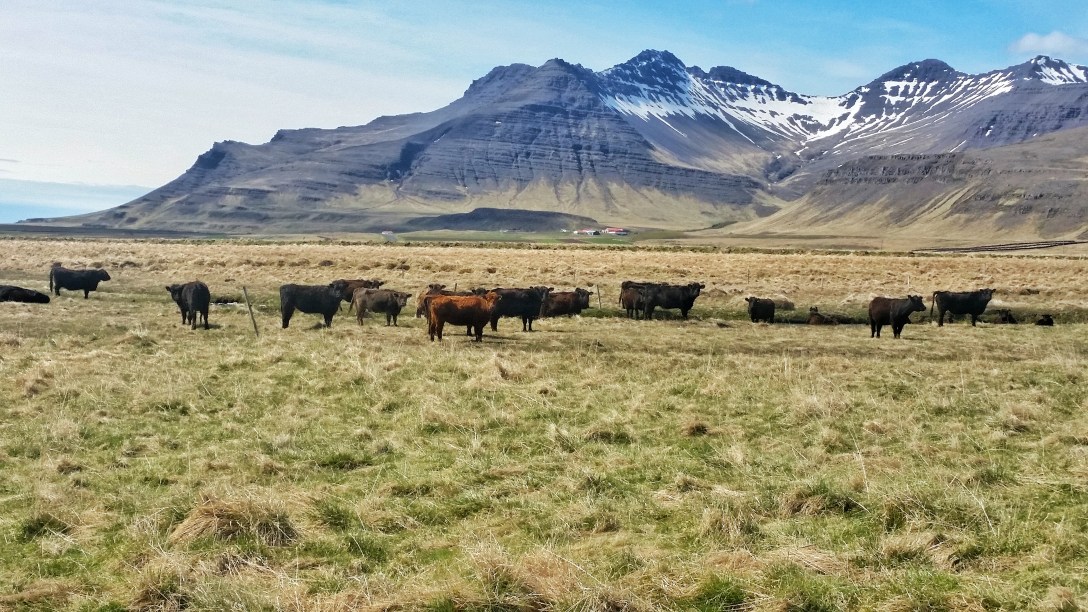 At this point, we carried on along the south coast, stopping to pick up a hitchhiker along the way who happened to be from Washington D.C., and had been making his way around the peninsula for the past few days.  Hitchhiking is considered to be very safe and is actually very common as a way for visitors to make their way from place to place.  We swapped stories of our travels thus far, and provided him with a warning of an impending weather system that was due to arrive that evening and have an effect on the weather for the next few days.  He decided it was probably best to stay in a hostel for the night rather than try and camp with the incoming storm.  We dropped him off at a hostel along the way, and as the night wore on, it became quite obvious it was a good decision, which I’ll get more into here soon.

Just before arriving at our hotel in Hellnar, we stopped in the very tiny village of Búðir.  The town only consists of 2 buildings:  A boutique hotel and a small wooden church.  The place was incredibly charming and we really enjoyed walking around the area. 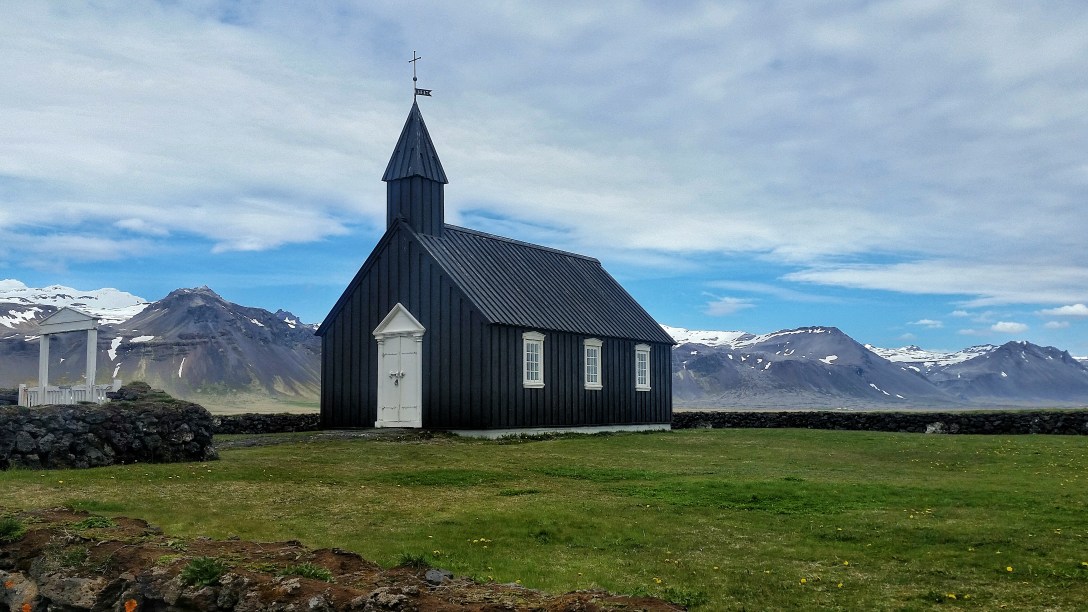 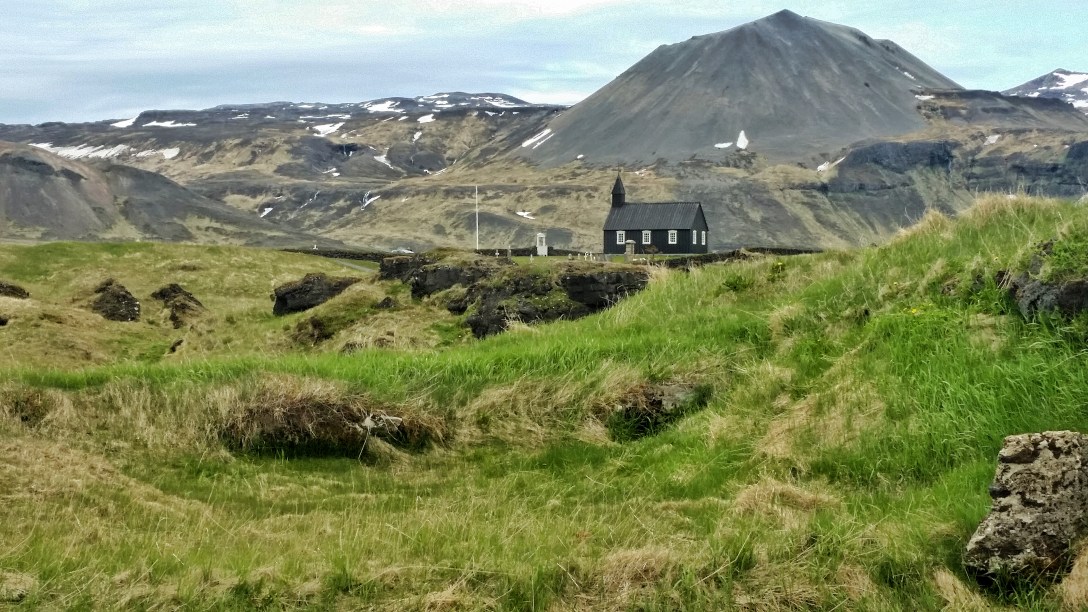 Right near the church we stumbled on the old ruins of what later research told me was the remains of an old fishing village. 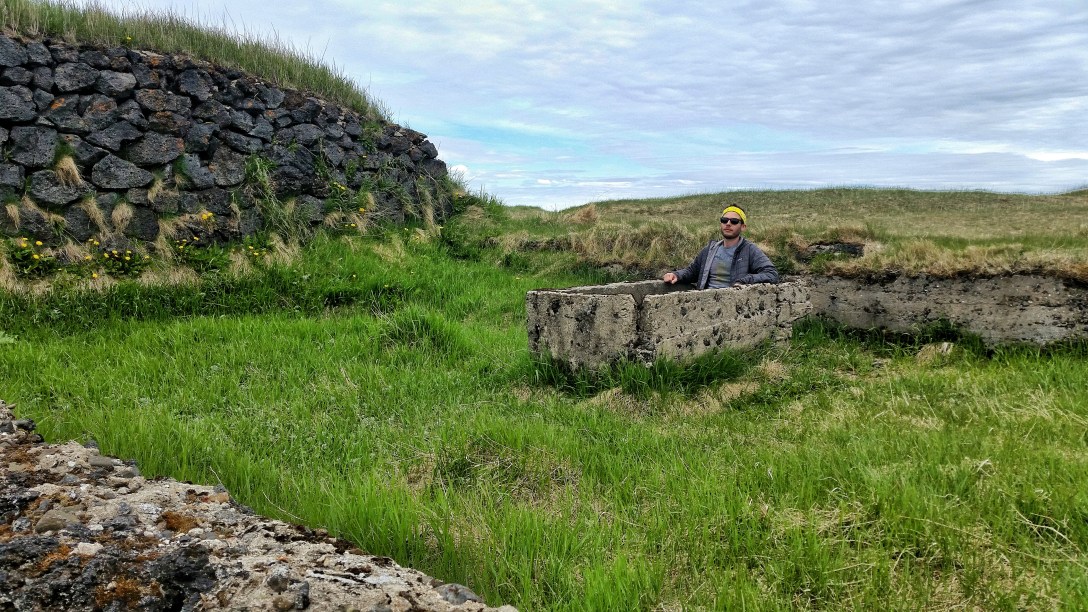 We also stumbled upon some sort of old abandoned underground thing, maybe it was an old haykeep or something, but whatever it was, it was pretty cool.  It would have made an amazing clubhouse if I were 10 years old.  NO GIRLS ALLOWED! 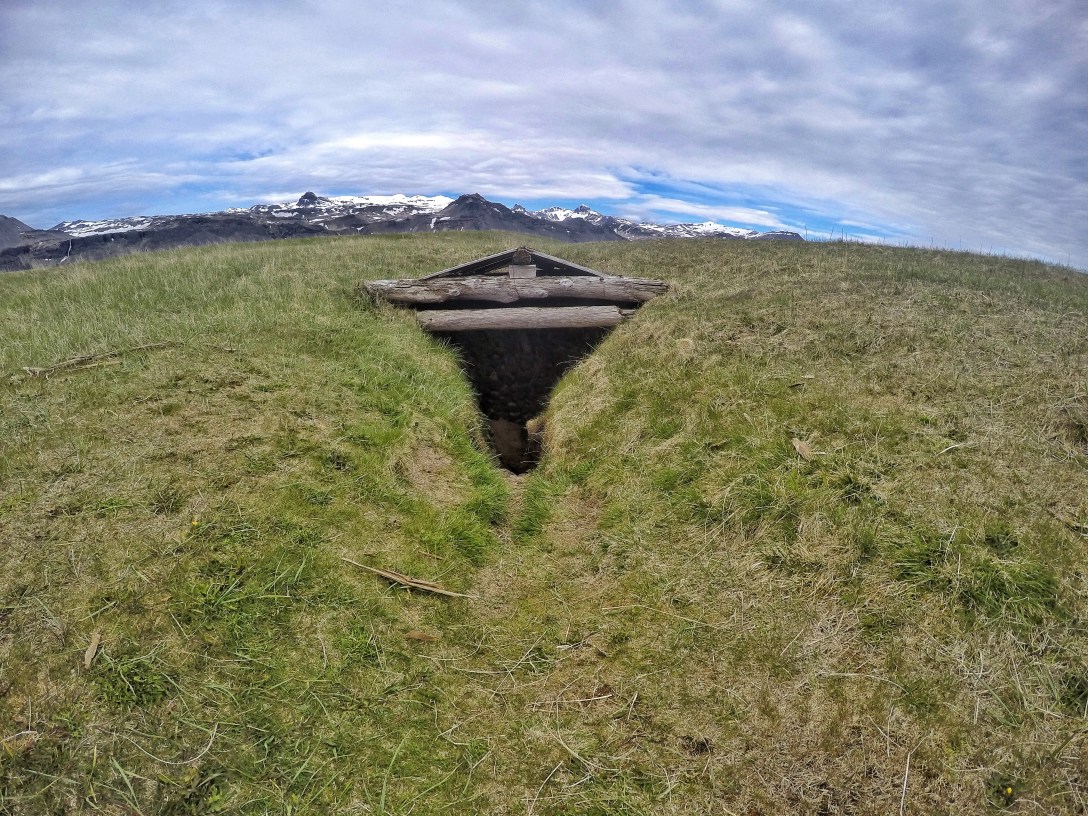 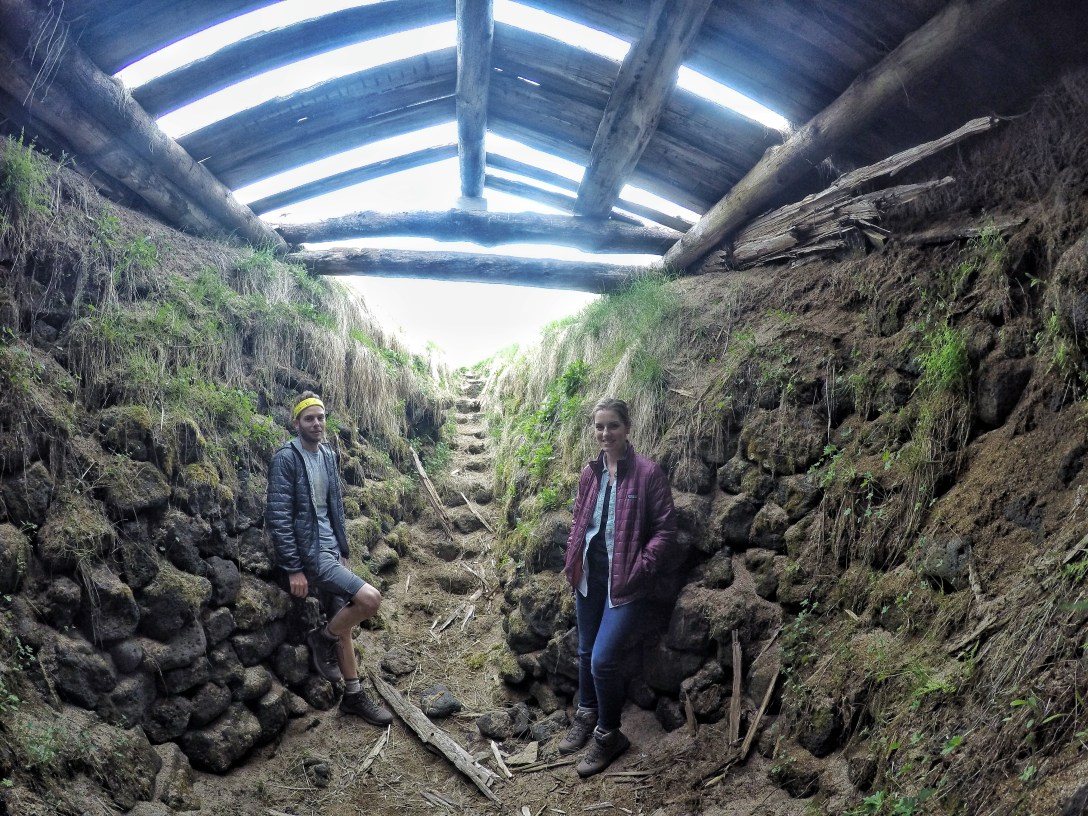 The next town over from Búðir was Hellnar.  We checked into the very charming boutique hotel and then set out to do the much talked about walk along the beach from Hellnar to the neighboring village of Arnarstapi. 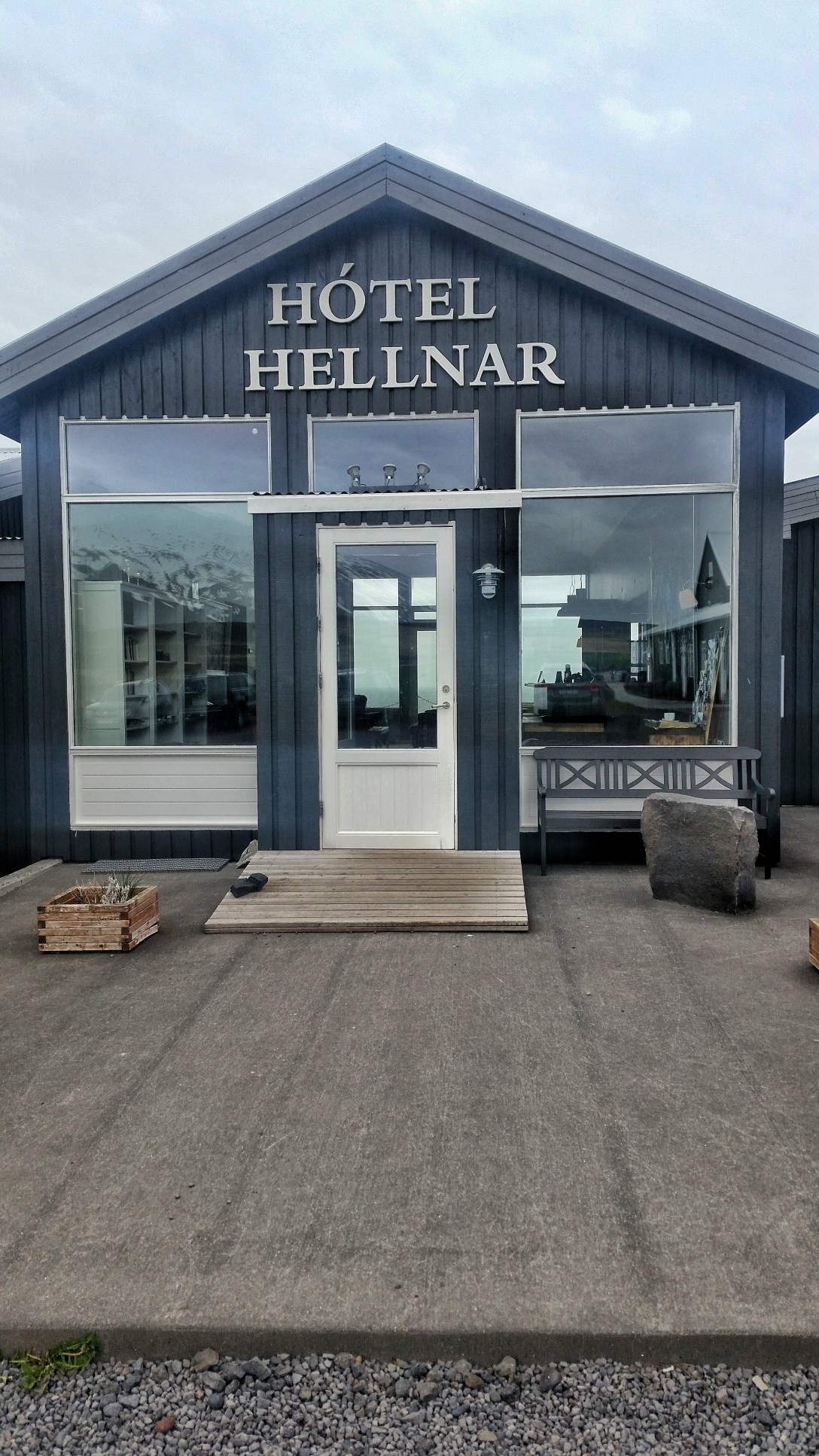 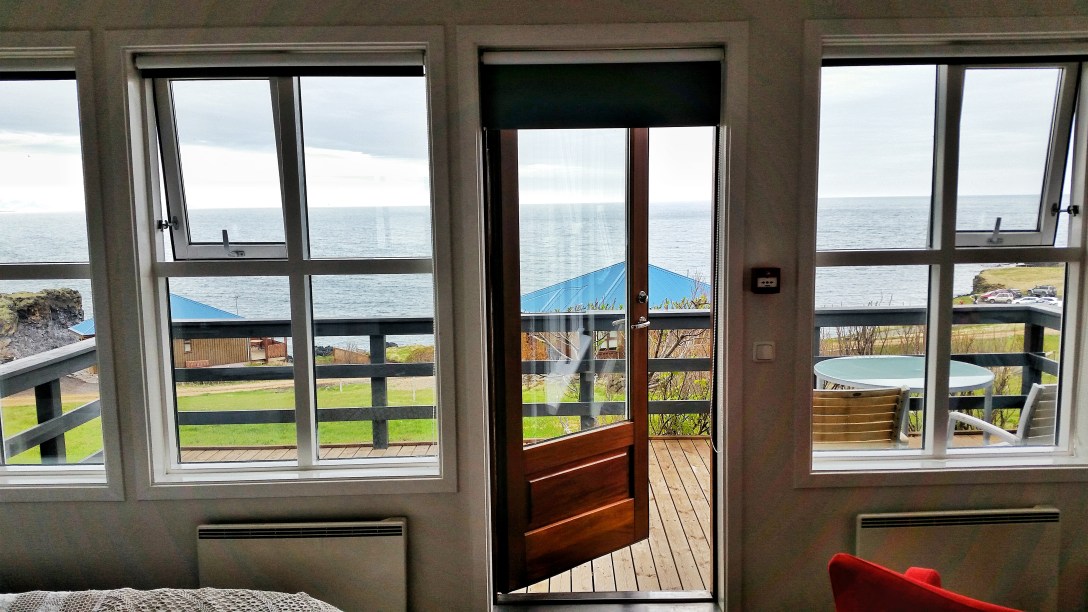 By this point, the leading edge of the clouds for the impending storm had moved in, so the sky had gone from that brilliant Icelandic blue to a more typical Icelandic overcast.  It nevertheless did not dampen the scenery along the walk. 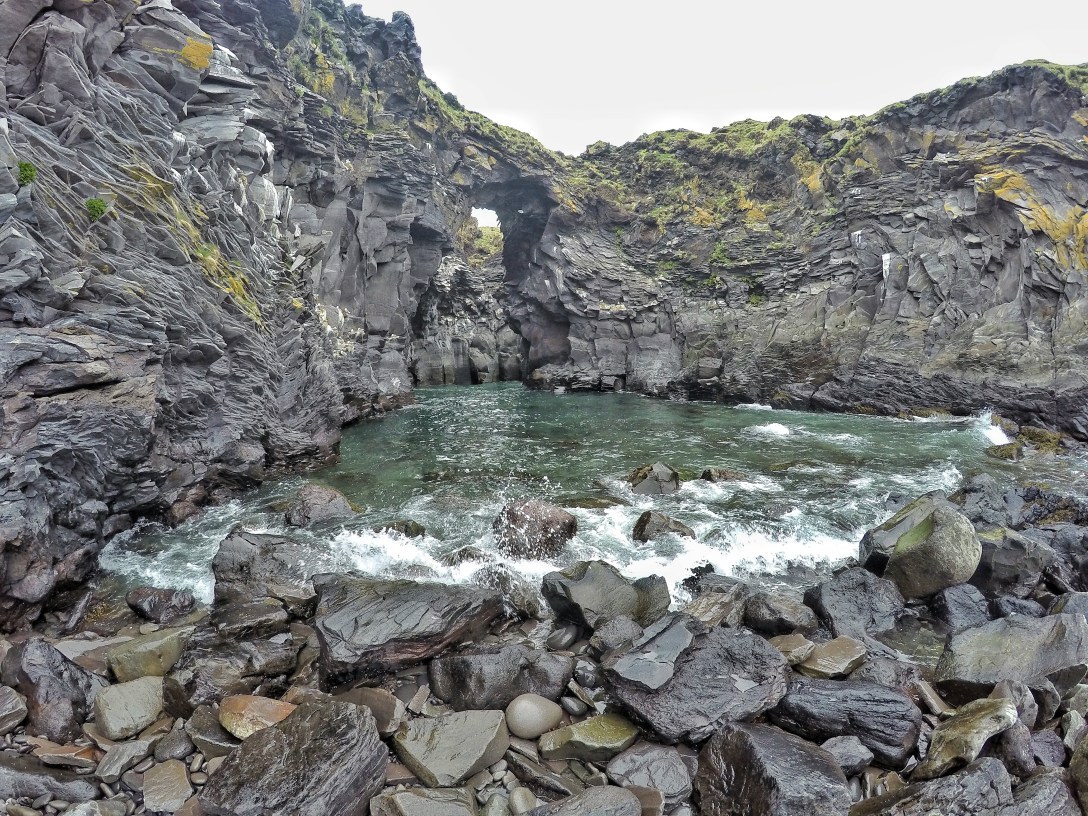 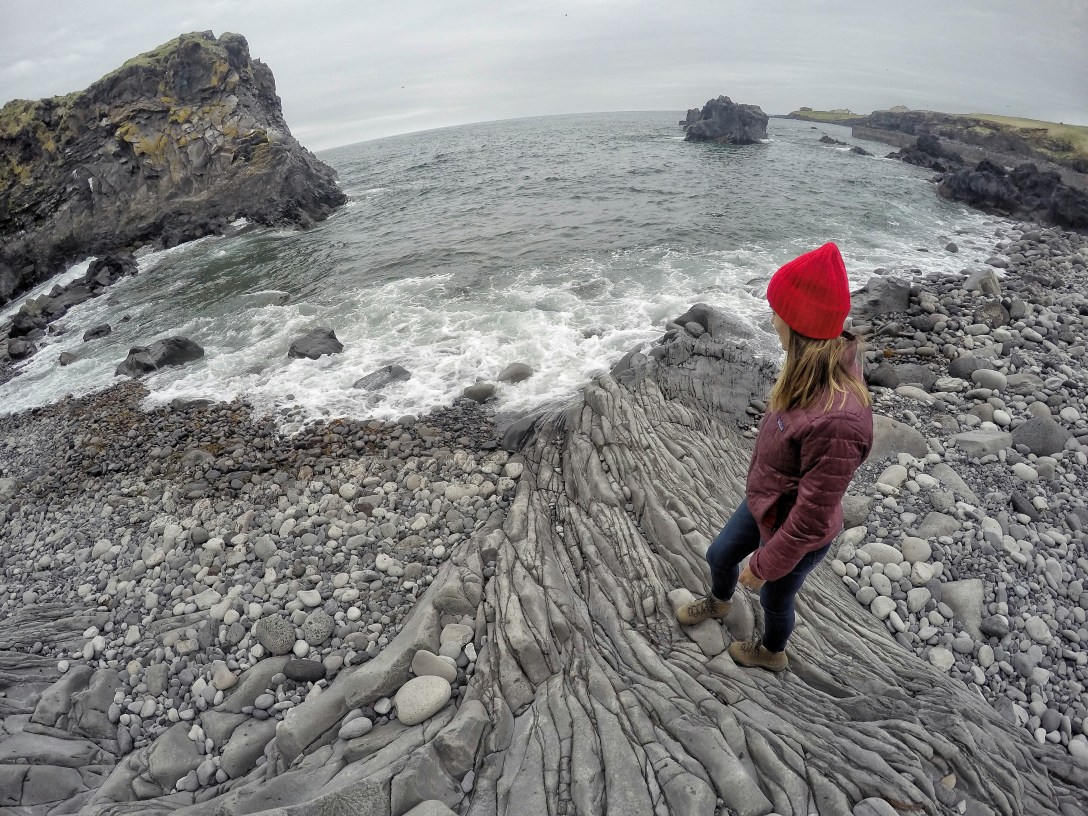 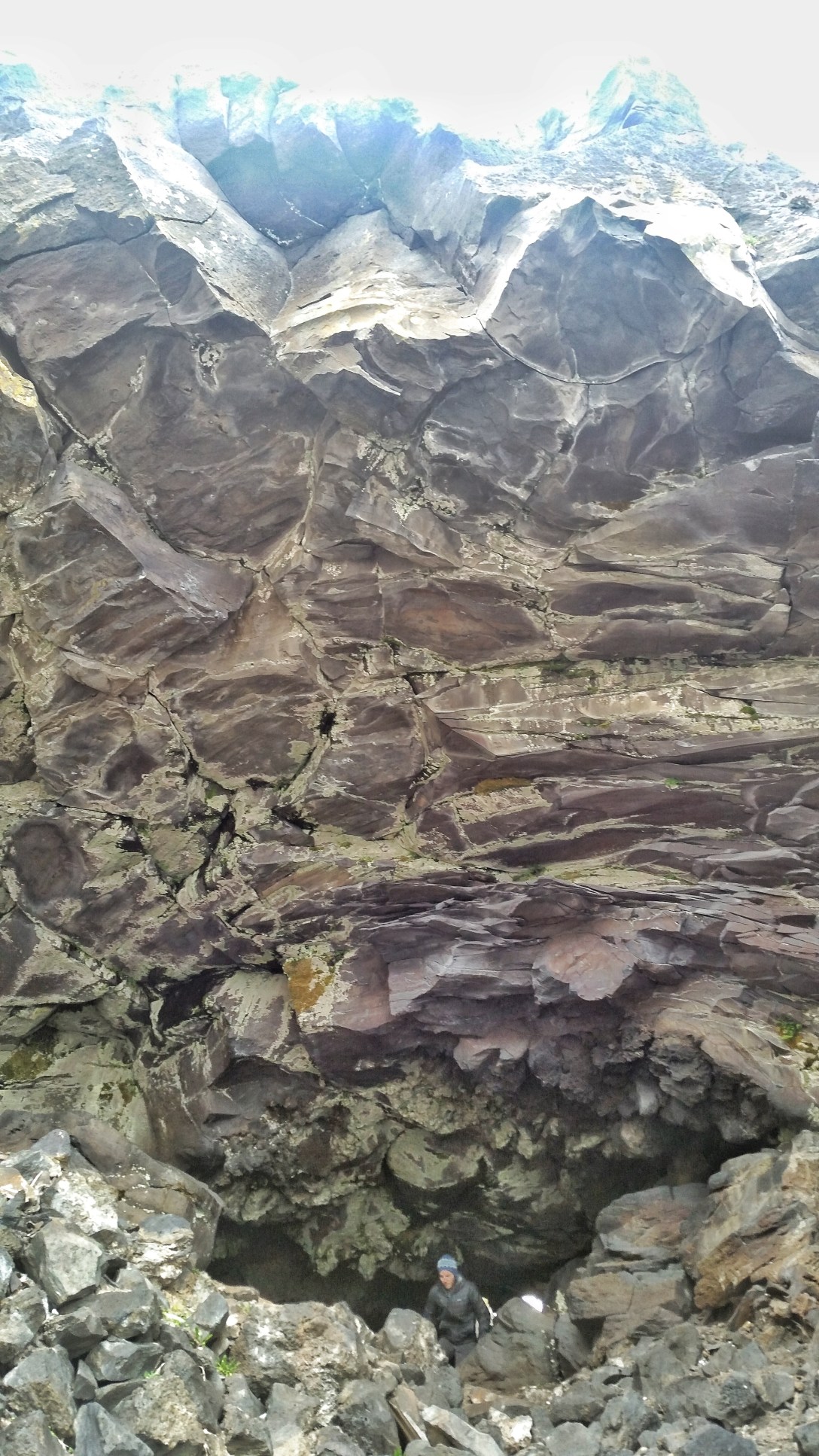 We settled in for a couple of Viking beers back at the hotel on our balcony after the walk to wrap up another fantastic day before leaving for Stykkisholmur the next morning.  We were visited by a mother sheep and her baby grazing just off our deck as we sat out having our drink, it was all very Icelandic in nature.  As we settled in for bed that night, shit hit the fan and incredible tropical storm forced winds and rain took over.  It all made for amazing sleeping weather, though! 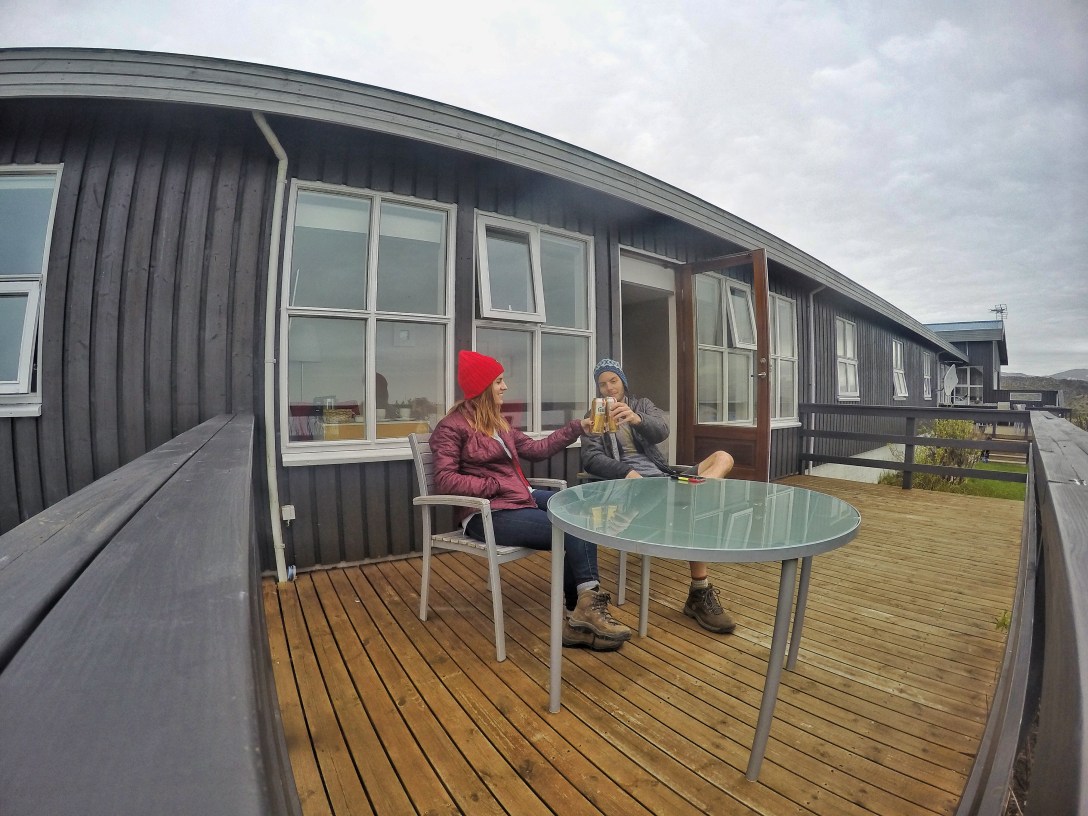 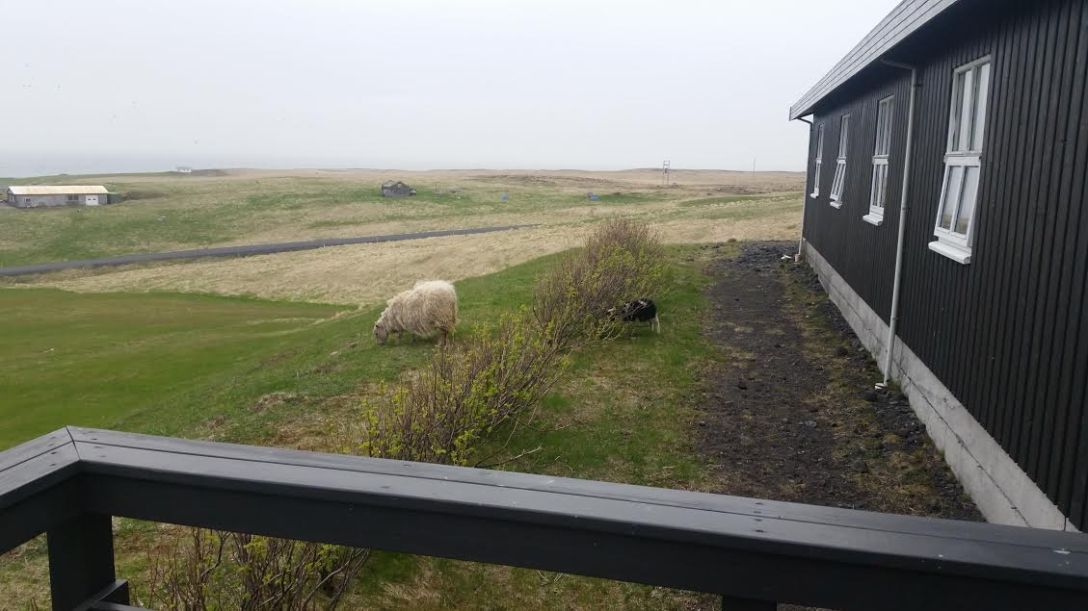 One thought on “Iceland, A Land of Diversity, Part 3: Southern Snæfellsnes Peninsula”