Upon awakening the following morning in Hellnar, the raging storm was still in full effect – sideways blowing rain, winds at tropical storm force, it was not an ideal situation for hitting the road.  But weather can vary so drastically from one place to another, and we had a lot of things planned, so after breakfast, we hit the road anyway.

Our first stop was at Djúpalónssandur, a beautiful beach with the ruins of an old fishing boat scattered around.  Also the home of the lifting stones, once used to judge the hardiness of prospective crew for fishing boats.  We arrived at the parking area for the beach and the wind and rain was so bad, that I was afraid to open my door for fear it would be ripped off.  This is actually a legitimate concern and happens to a lot of unfortunate car renters on a regular basis.  We decided to wait it out for a bit.  We sat in the car for about 30 minutes and the weather was not going to let up, so we traveled onward.

Our next scheduled stop was in Snæfellsjökull National Park.  The Snæfellsjökull is a large mountain with a glacial dome on top, that served as the entrance to the center of the earth in “Journey to the Center of the Earth” by Jules Verne.  It’s also supposedly one of the main energy centers on earth, whatever that means.  Still the storm raged on and we bypassed this stop as well.

We passed a few of our other scheduled stops along the way until finally, mercifully, the storm suddenly let up, and a massive rainbow appeared to our left. 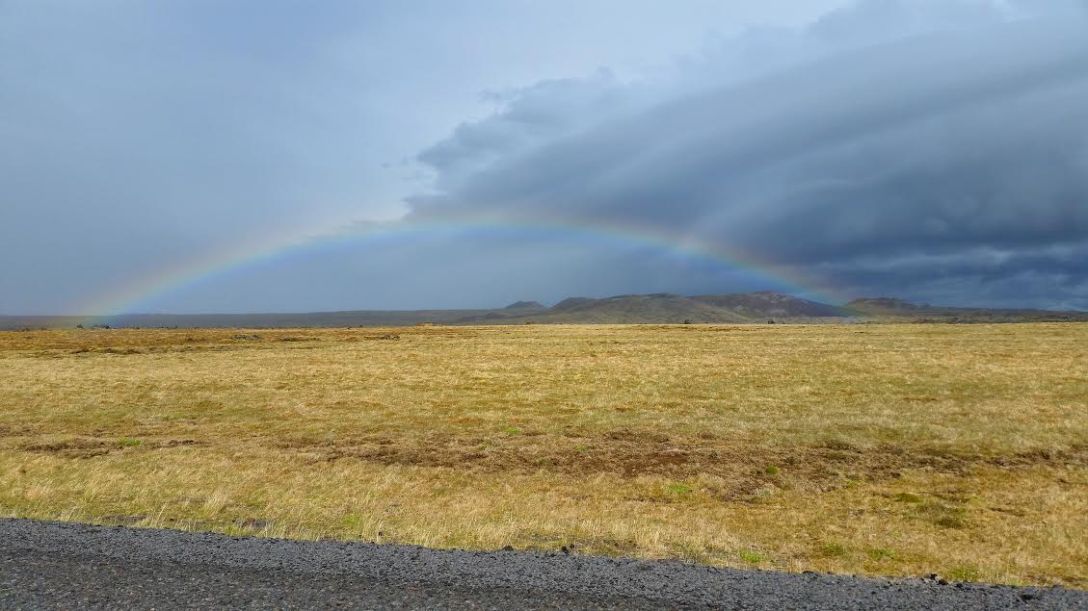 We decided we’d take this opportunity to finally do something from our agenda, as we were right next the Saxholl volcanic crater.  It was a relatively quick and easy climb up the side of the volcano, so we threw on rain gear just in case, and headed up.  About halfway up the volcano, the storm came roaring back just as quickly as it had disappeared and we were suddenly faced with insane winds – like “toss you right of the mountain” level winds.  I yelled to Christina that it was probably a good idea to head back to the car, so we got our bodies low to the ground and struggled our way back down the mountain, all the while trying not to be flung off into oblivion.  Safely back to the car, we headed onward.

We worked our way around the westernmost tip of the peninsula and started to head back eastward on the northern side.  By this point, we had either moved away from the storm, or the storm had moved out of the area, because the winds died down, the rain became intermittent and more of a drizzle, but the skies stayed overcast.  Really happy about that, because I was really excited to see Kirkjufell, a mountain that sort of reminds me of a witches hat. 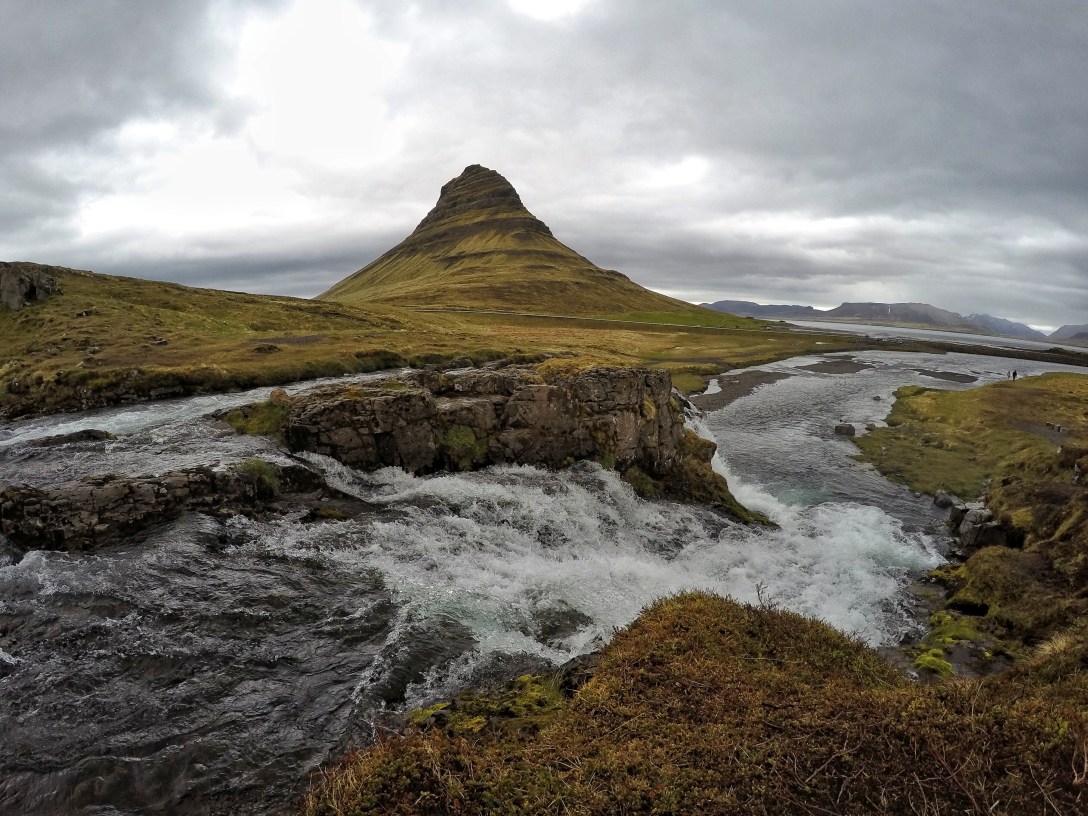 I really wanted to climb the thing, but I didn’t want to end up in another precarious situation, so we just viewed it as the rest of the tourists do:  from a distance. Next stop was a vast lava field called Berserkjahraun.  This one has a pretty interesting story behind it.  According to an Icelandic Saga, a farmer hired a berserker to clear a path through the lava field to his farm.  (A berserker was an ancient nordic warrior that would drape himself in the hide of a wolf and fight battles in a vicious, trance-like state, hence where we get our word “berserk” from).  In exchange for clearing the path, the farmer offered the berserker his daughter upon completion of the task.  Well, the berserker fulfilled his end of the bargain, and in the return, the farmer murdered him.  Yeah, I know.  Total dick move.  It was an amazing place to experience though – volcanoes everywhere.  Absolutely gorgeous. 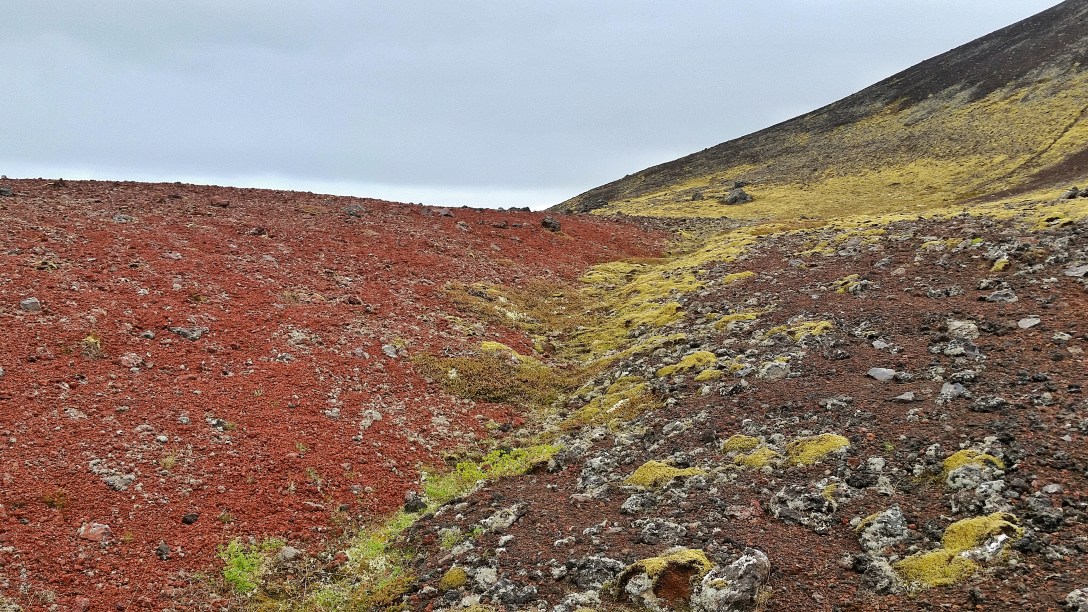 I might have had more fun here than anywhere else in the country!  We were the only 2 people around, and took the opportunity to climb up the side of an active volcano. The contrasts of colors here were incredible – red lava rocks, black basalt, and various shades of green moss made it feel like we were on another planet.  Totally cool place.

Next stop was in the town of Grundarfjörður. at a mountain called Helgafell.  If you haven’t already picked up on it, I’m obsessed with mountains and going up on high places.  Helgafell is special in that it is know in local lore as a wishing mountain, and there are a set of very specific instructions on how to get your wishes granted.  I don’t ascribe much to all that superstitious hoodoo, but I was determined to take this thing seriously and get some wishes granted.  The instructions are as follows:

So, my wishes are made, and you shall never know what they are!  It also happened to have spectacular views over the surrounding landscape, with the village of Stykkisholmur clearly visible. 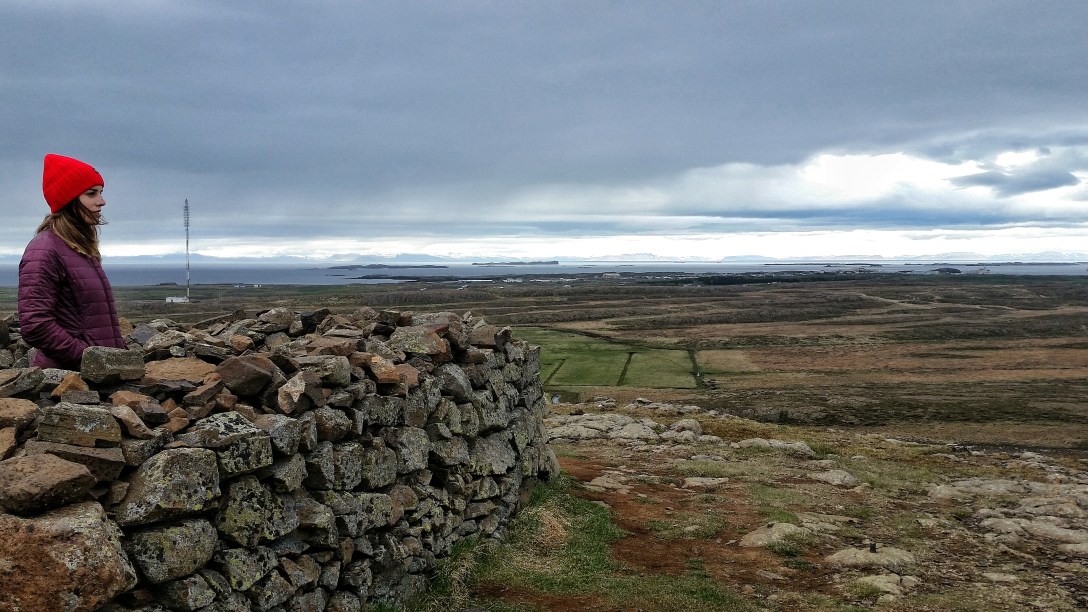 So with our wishes set, our last stop was in the town of Stykkisholmur, where we were staying for the night in a very charming old building called Hotel Egilsen. We absolutely loved the place, and the girl at the front desk was very friendly and easy to chat with about the area, and Iceland in general.  We enjoyed a beer in the charming downstairs common area before wandering into the small town center. We made a stop at the Volcano Museum, which is run by a renowned Icelandic volcanologist who actually mans the museum and is happy to answer your questions.  We watched a fascinating documentary about the 2010 eruption of Eyjafjallajokull (the one that disrupted all the European air travel, and pronounced “ay-a-fyat-la-yo-kutl-uh”) and got to see a lot of artwork and artifacts related to famous eruptions around the world. From the museum, we wanted to do as the locals do, so we headed to the town swimming pool/hot pot.  The day was cloudy and a bit chilly, so the warm waters of the hot pots were a welcome diversion.  I could totally get used to all these swimming pools!

A small pizzeria caught our eye on the walk back to the hotel, which sounded just fine for dinner.  We were a little vexed by the size options: See, the Icelandic word for “small” is “Lítill”, and the word for “large” is “stór”.

We headed back to Hotel Egilsen, and hung out in the common area for the remainder of the evening, chatting with the front desk clerk, as well as a very adventurous couple from Chicago who had earlier summited the highest peak in Iceland.  I have to say, I was completely charmed by Stykkishólmur – there seemed to be a refreshing lack of the hordes of tourists and everyone was just so friendly.  I especially enjoyed how quiet and laid back the town was.  It was a much needed stop after a pretty hectic and fast paced journey to this point so far.

One thought on “Iceland, A Land of Diversity, Part 4: Northern Snaefellsnes Peninsula”