We were booked on the first departure on the Baldur Ferry to cross the sea between Snaefellsnes and the Westfjords.  The journey took about 2 1/2 hours and the boat stopped at the small island of Flatey to let off a number of the passengers, before heading on to dock in the town of Brjánslækur.  The clouds were out, but it didn’t make the place any less stunning.  They’re called the Westfjords for a reason…just fjords in every direction 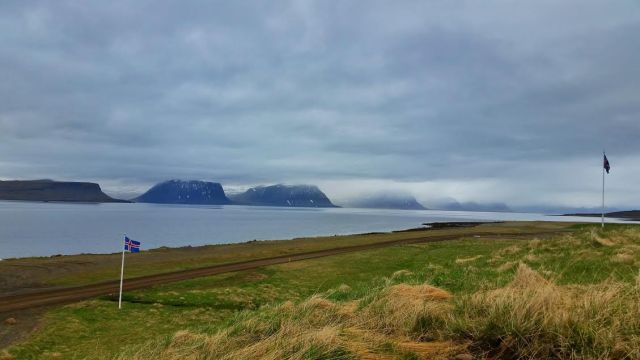 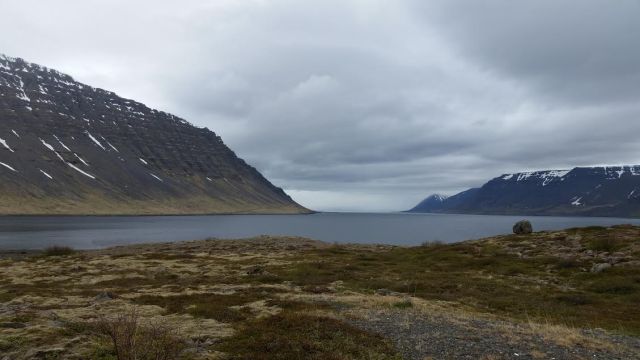 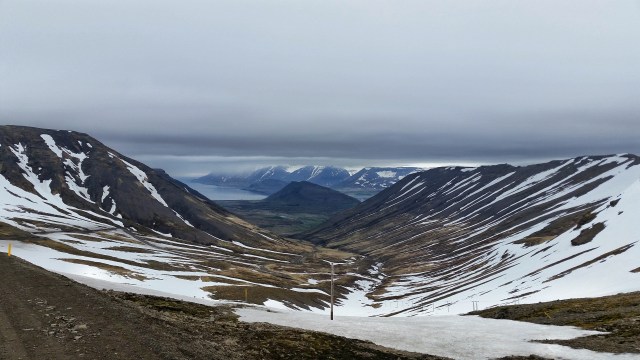 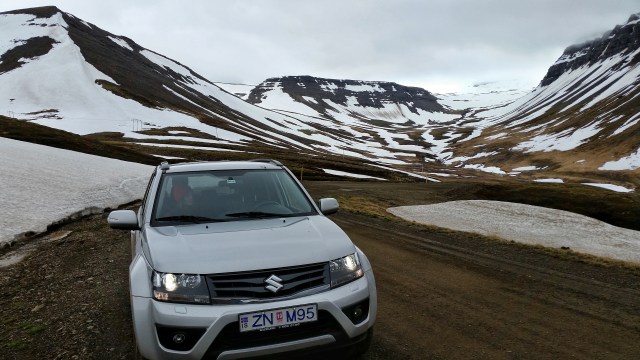 Our ultimate destination was the northern town of Ísafjörður, the largest town in the Westfjords, though it only has a population of around 5,000.  En route, we stopped at the massive Dynjandi waterfall.  It’s shape reminds me a bit of a wedding cake, as it falls in levels with each step increasing in width. 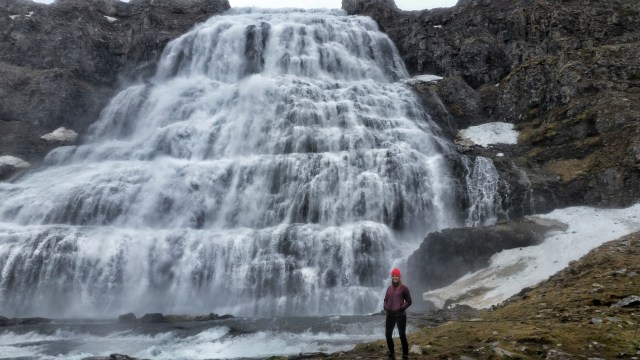 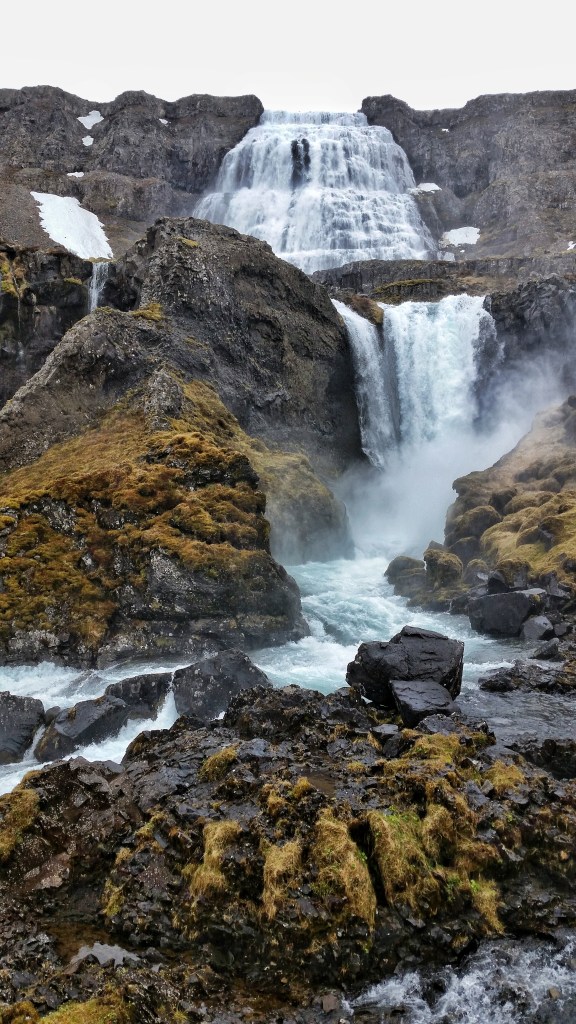 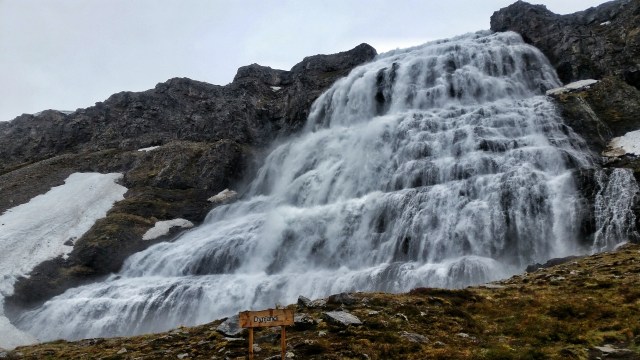 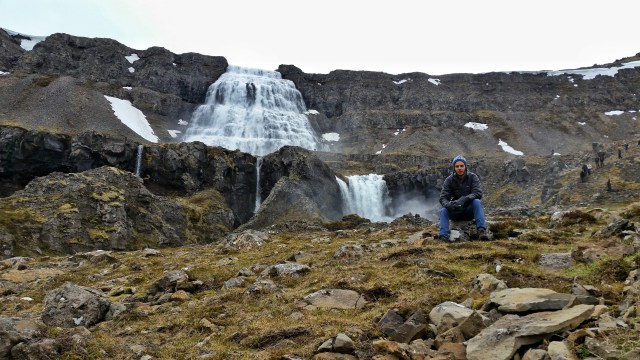 As we walked closer to the falls, I saw who I swore was Björk sitting on a rock and meditating in front of the falls, but alas, it was not her.  We had an unsuccessful attempt at this point of trying to use our camping stove to cook some canned ravioli for lunch, I think it was a bit too windy to keep the flame going, combined with my lack of experience, so lunch became cold ravioli, a viking beer, and Kind Bars.  I never claimed to be an experienced camper.

Onward we drove, stopping to fill up our canteen with pure Icelandic glacial water; it was the best tasting water I’ve ever had, just because it was right from the source.  We eventually made it into Ísafjörður and started moving into our apartment, rented through the Scandinavian version of AirBNB, called Bungalo.  Somehow our host had us down for the following weekend, but in laid back Icelandic style, all was well, and she cleaned the apartment up for us and had it ready within about an hour.  Today was incidentally Icelandic National Day, so everything was closed with the exception of a restaurant/bar/everything store, so we went there to have some ice cream while we waited to move in.  It was there we found this amazing Icelandic treat: 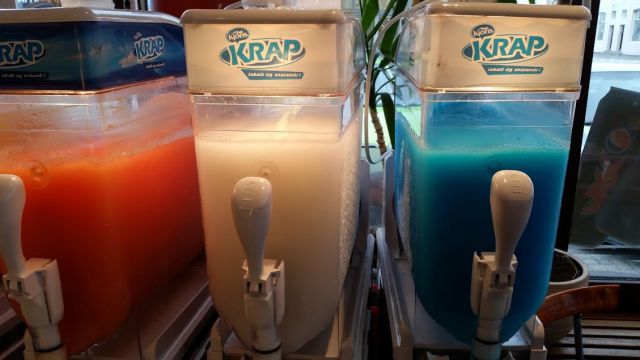 The apartment we stayed in was immaculate, and very comfortable and roomy. 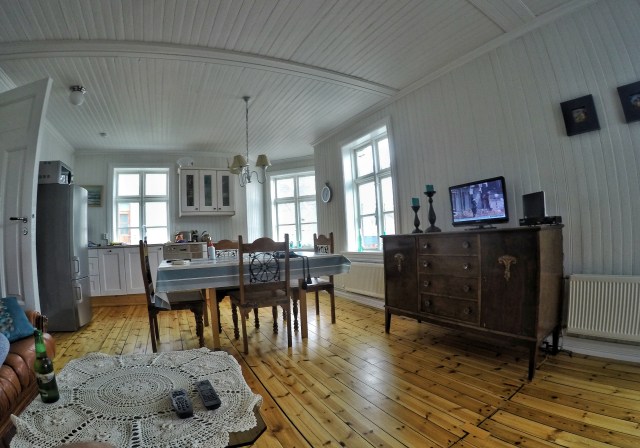 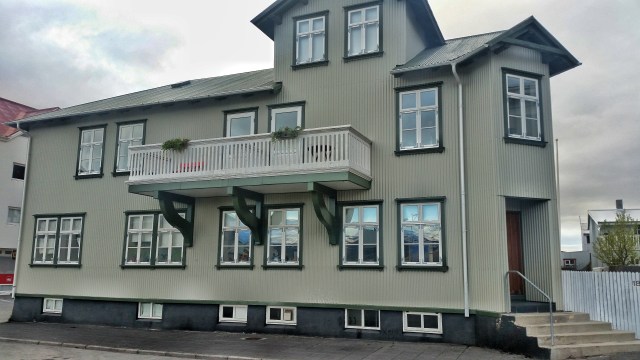 And the views from the windows were enough to make me question why I live in Houston, Texas, and not some exotic, sub-arctic wonderland. 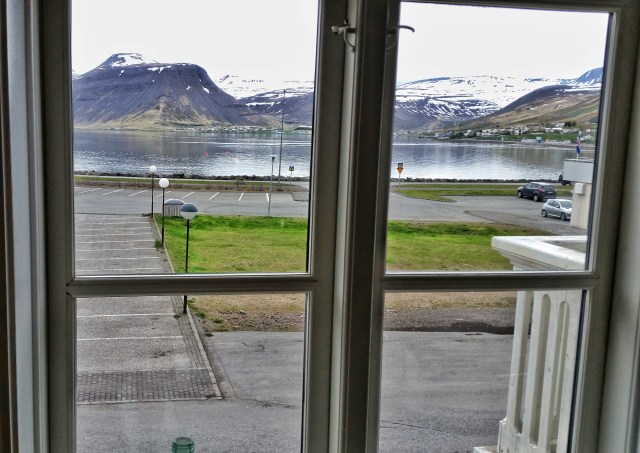 The next morning was our pre-booked excursion with West Tours, called the “King and Queen of Cliffs”.  This tour involved a 2 hour chartered boat ride up to Hornstrandir National Park, just south of the Arctic circle, and the northernmost point in the Westfjords.  We arrived early and boarded the boat along with about 14 others from various countries. 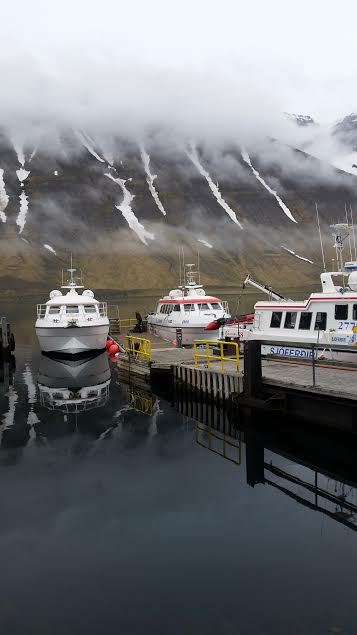 The weather was just completely awful – not raining or windy, but just zero visibility.  One of those days where the fog is so dense you could practically swim through it, and the visibility was about zero.  It’s okay though, because my Icelandic weather app, Veður, was telling me that it was going to be brilliant sunshine by the time our hike was to begin.  Wellllll, it didn’t quite work out that way.  The fog stayed thick and low, and we hardly saw much, but it was still great hike, with a great guide, Óli. 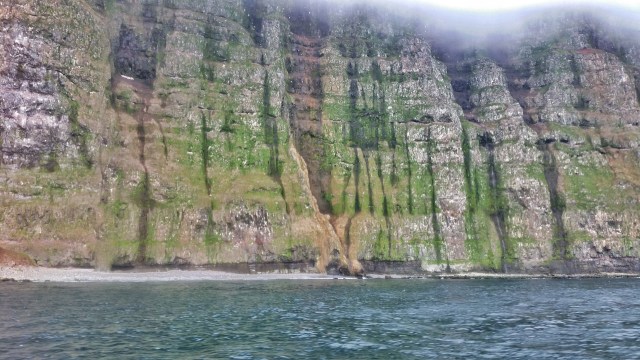 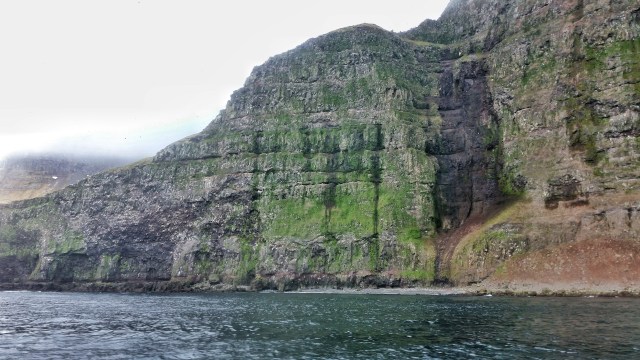 The hike started with an exhilarating ride from the boat on a zodiac rubber raft, where we disembarked onto a rocky shore and were briefed on the plan by our guide, Óli. 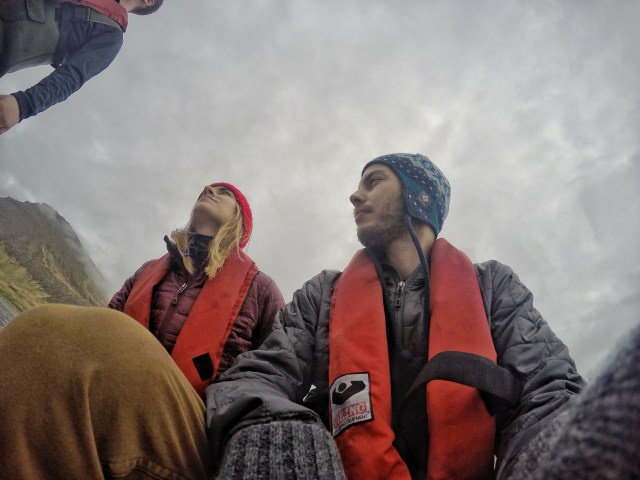 At plenty of points on the hike, Óli said “…and here is where you would see such and such, if these thick clouds weren’t here…” The sights we could see, however, were pretty spectacular.  The hike took us along narrow cliffsides, steep mountains, and between fjords.  We walked through a fox den, and on numerous occasions witnessed an arctic fox following our group, hoping to snag a snack from someone.  We hiked to the highest point in the Westfjords, at the Hornbjarg cliffs, and had it not been for the dense fog, it would have been far more terrifying seeing the vertiginous drops on all sides of us, that were mercifully hidden from view today. 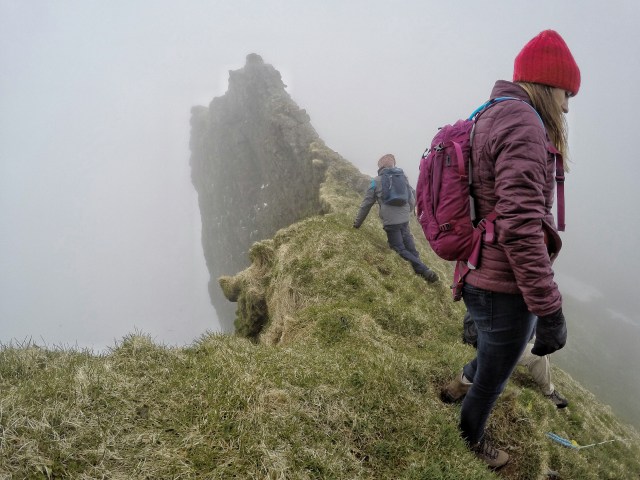 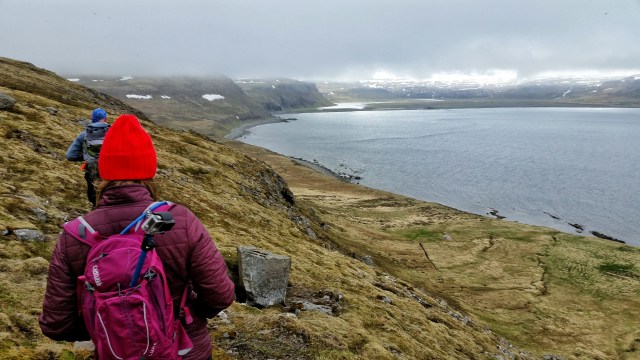 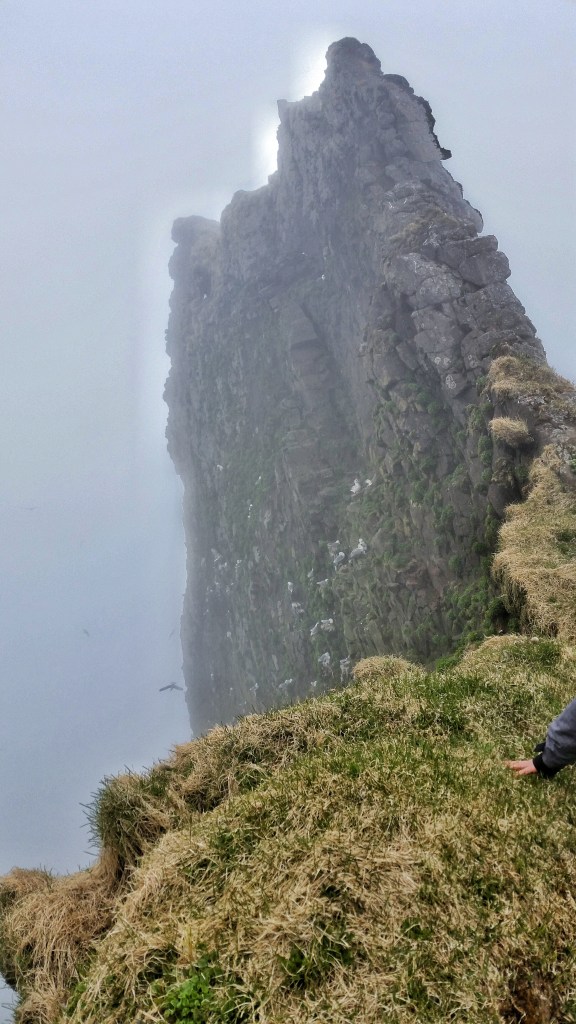 We stopped for a lunch at the highest point of our hike, after a rather strenuous slog of the mountainside, and were very winded by the time we made it to the top. You could essentially straddle the summit where we sat with your 2 legs on either side of the mountain.  It might have been scary on a clear day.  We ate our Skyr and Subway sandwiches here while resting up for about 30 minutes. 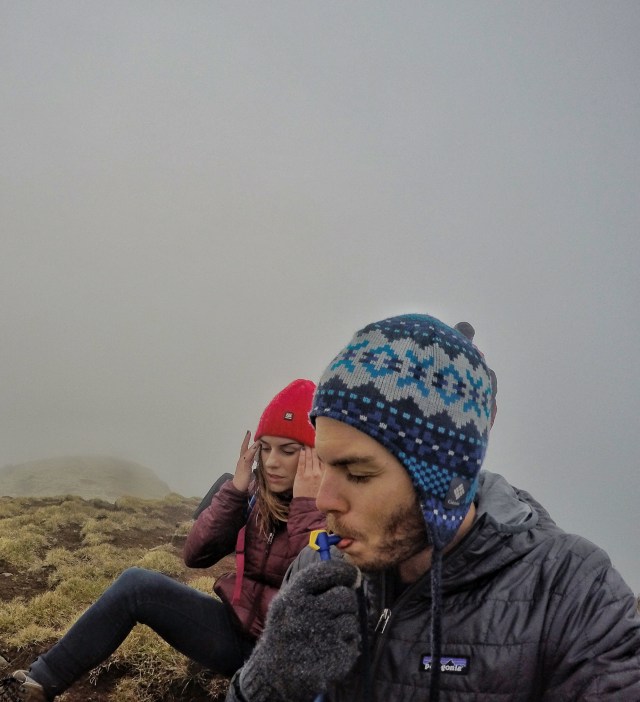 The actual hike itself was supposed to last between 6 and 7 hours, but when all was said and done, it ended up being closer to 4 because we weren’t spending as much time as normal at the viewpoints, just because of the fact that you couldn’t view a whole lot.  Word started coming in from various hikers passing by that the clouds were scheduled to part around midnight or so.  Our guides decided to call it a day and we all met back at the beach where we started and they summoned our boat for the return to Isafjordur.

Right on schedule, at around midnight, the clouds parted and blue skies prevailed, finally giving us the full majesty of the Westfjords, from the comfort of our apartment. 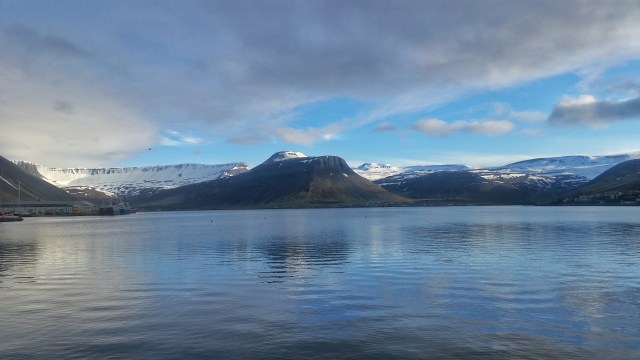 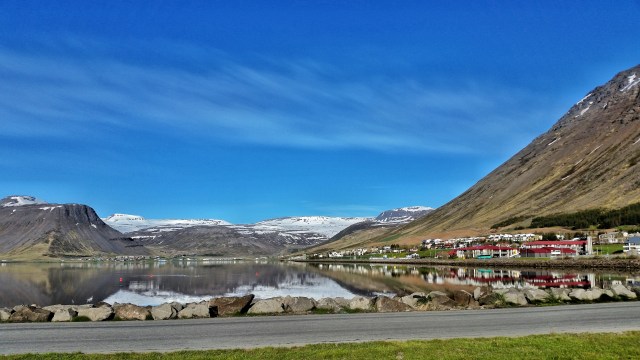 I want to include an aside here to mention that these are not photoshopped pictures.  The skies are actually this blue in Iceland – something to do with the angle of the sun, refraction, etc.  It is a completely alien blue, but so amazing to behold.

The following morning we began our long drive back south to Reykjavik, the capital, and by far most populous city in Iceland.  The population of the country is around 350,000, and roughly 300,000 of those live in or in the immediate vicinity of Reykjavik.  The 6 hour drive back was incredibly scenic and went by pretty rapidly, thanks to the constantly changing landscape.  Many stops were had.  I peed in many beautiful places.  The weather could not have been better. 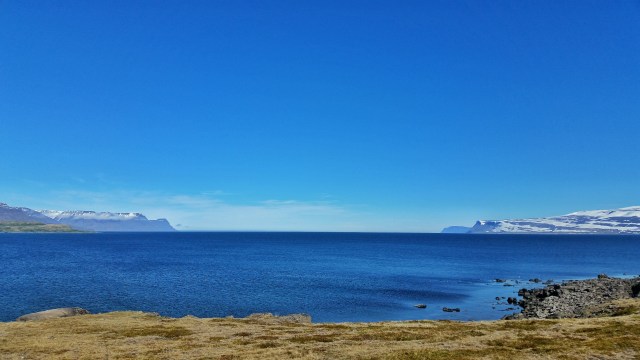 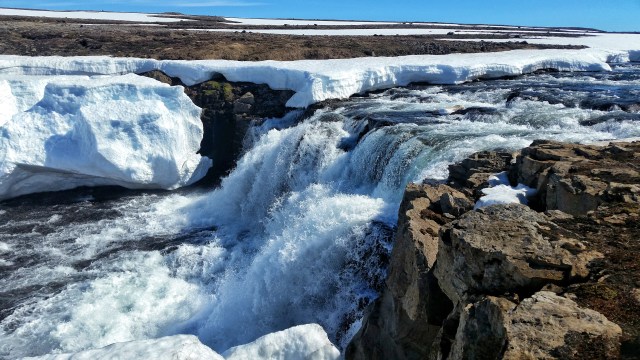 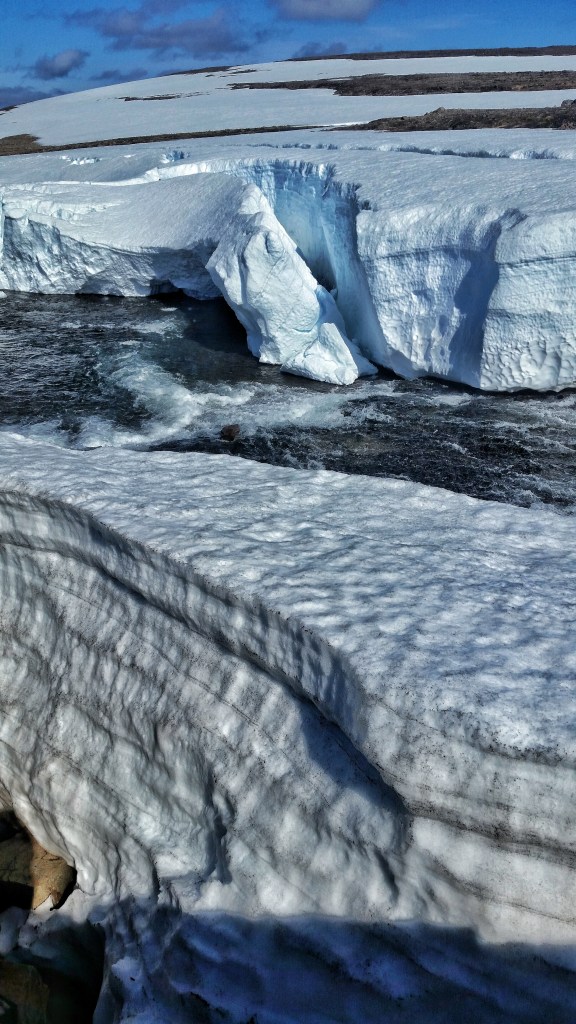 We got into Reykjavik in the mid afternoon hours, and checked into our room at the ultra modern Alda Hotel.  Reykjavik stood in stark contrast to the rest of Iceland in almost every way.  If you’ve ever been to New Orleans on Bourbon Street, that’s essentially what the street our hotel in Reykjavik reminded me of in terms of volume of people walking along it.  There are some great bars and restaurants in Reykjavik, and we took full advantage of them – starting with dinner at a full vegetarian restaurant called Glo,where I had some raw vegan enchiladas.  It was really really good. 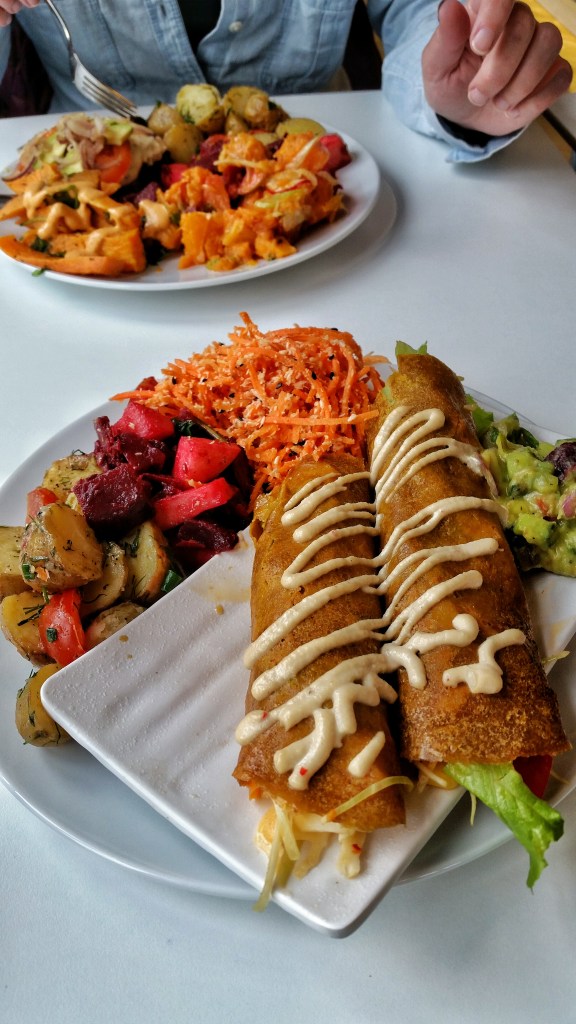 Following dinner, we walked next door to the Lebowski Bar, a Big Lebowski themed establishment that I quite enjoyed.

The next stop was at Íslenska Húðflúrstofan, the Icelandic Tattoo Company, to get a Vegvísir tattoo, which is an Icelandic symbol that declares “if this sign is carried, one will never lose one’s way in storms or bad weather, even when the way is not known”.  I found this to be fitting tattoo to get, as I have felt a connection with Iceland for quite some time, and also being an avid traveler, it kind of fit with my modus operandi.  Haffi was my artist and he couldn’t have been more friendly and accomodating.  I was referred to the shop by a very helpful Icelandic acquaintance, Daníel, who helped me plan this whole trip to begin with.

The following day we were scheduled to depart at 5 PM, which gave us a full day to explore the city.  We visited Hallgrimskirkja, a very famous church that has amazing architecture, and even more amazing views over the city of Reykjavik from the top of the tower. 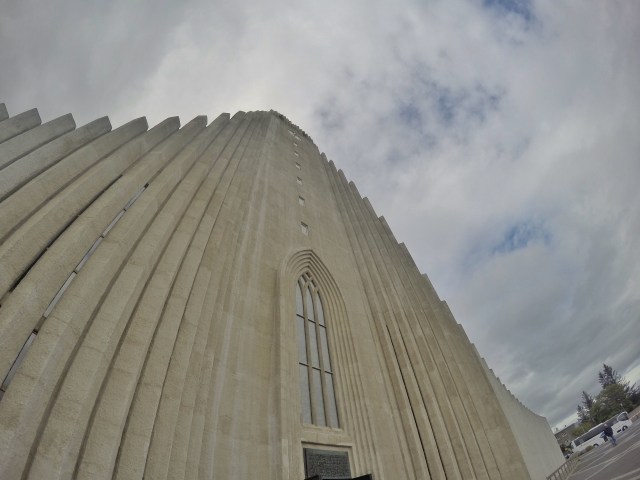 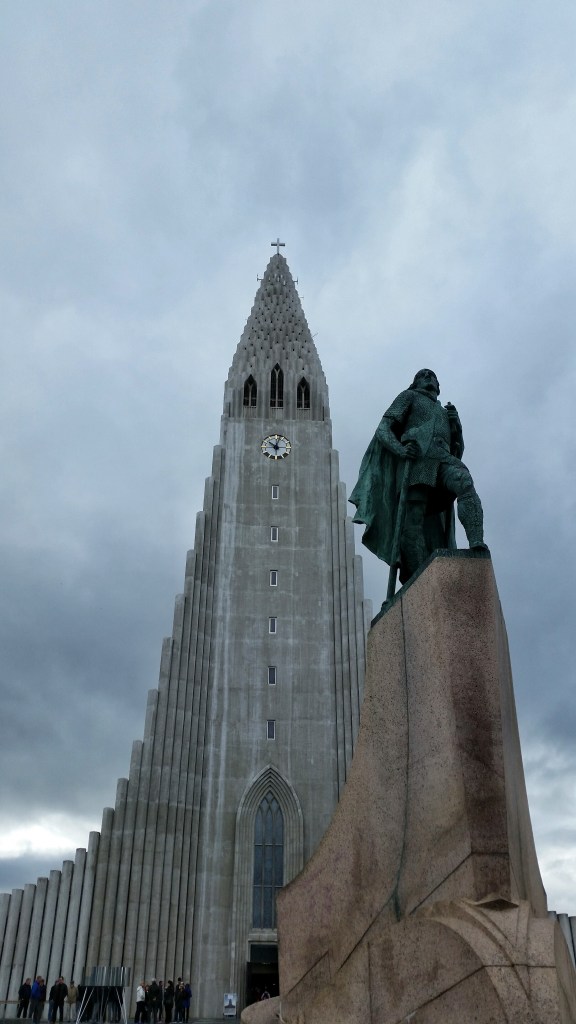 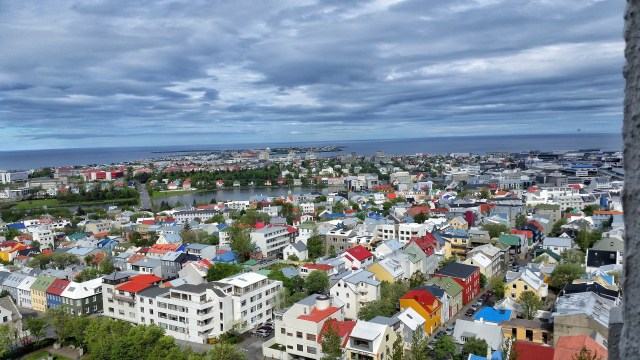 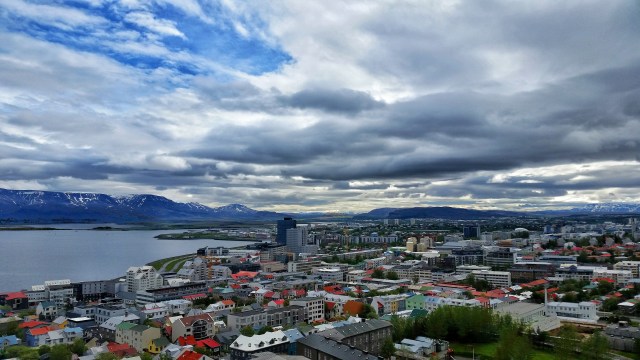 And with that, our time in Iceland was up.  Iceland had always seemed special to me, even before I stepped foot in the country.  I spent many nights dreaming about the country before I had been there.  After spending 10 days in Iceland, I fell even more in love with the country and it’s people.  My expectations had been high going in, and they were exceeded more than I could have even imagined.  If ever there were a place I’d like to revisit, it would be Iceland.  Despite having done and seen so much ,there was still so much more left to explore.  Iceland, we shall meet again soon.

18 thoughts on “Iceland, A Land of Diversity, Part 5: The Westfjords”