From an underground lake high in the mountains in the north of Slovenia, cold, clear, emerald blue water bubbles from a spring before snaking its way down the mountainside.  From here,  it flows through a valley that stretches all the way to the Adriatic sea.  This is the Soča River, with its unbelievably pristine, emerald blue waters, beckoning anyone who casts their eyes upon it to enter its frigid currents. 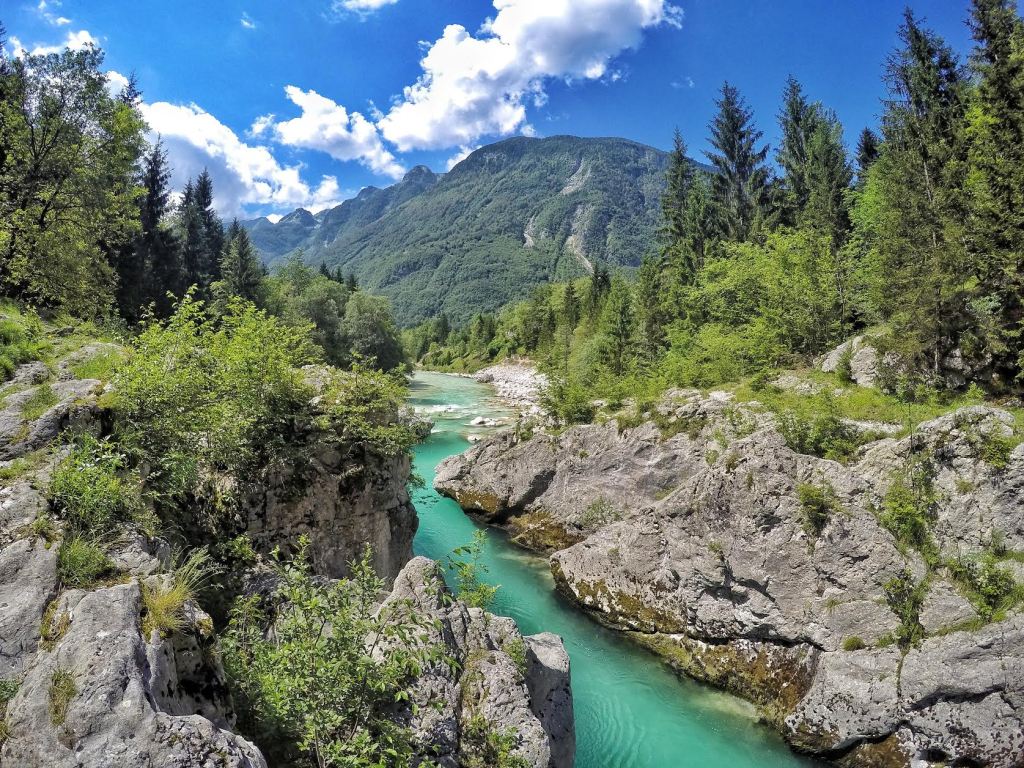 After departing from a 2 night stay in Lake Bled, we were excited to spend the next 5 nights in the Soča Valley, split between 2 nights in Bovec and 3 just outside of Kobarid, high in the mountains overlooking this stunning valley carved out in part by its namesake river.

We first laid our eyes upon the river after emerging from the winding road known as the Vršič Pass, that winds its way up and over the highest part of the Julian Alps, beginning in the town of Kranjska Gora, and ending in the town of Bovec.  As the road wound its way around the river, we were tempted to pull over to gawk and take pictures every few kilometers, having to remind ourselves that we’d be spending time in and around the river for the next week or so, and that there’d be plenty of time for us to take all the pictures we wanted.  That didn’t stop us from pulling over numerous times to walk across the plethora of bouncy suspension bridges that criss-cross the river in various spots. 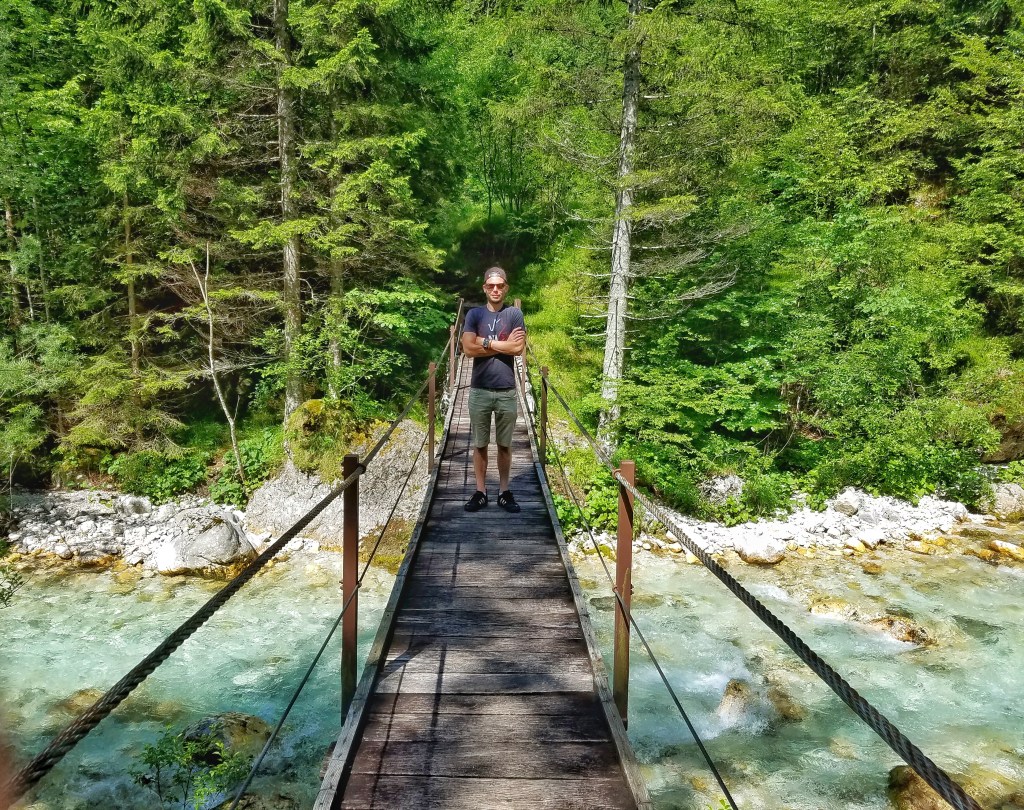 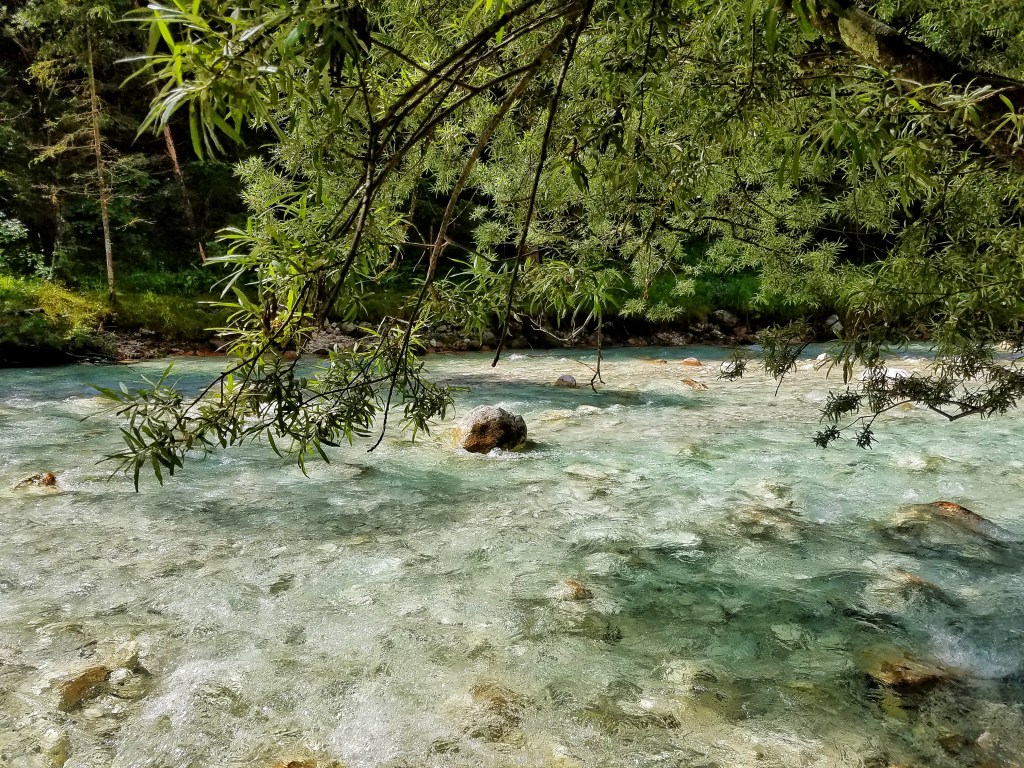 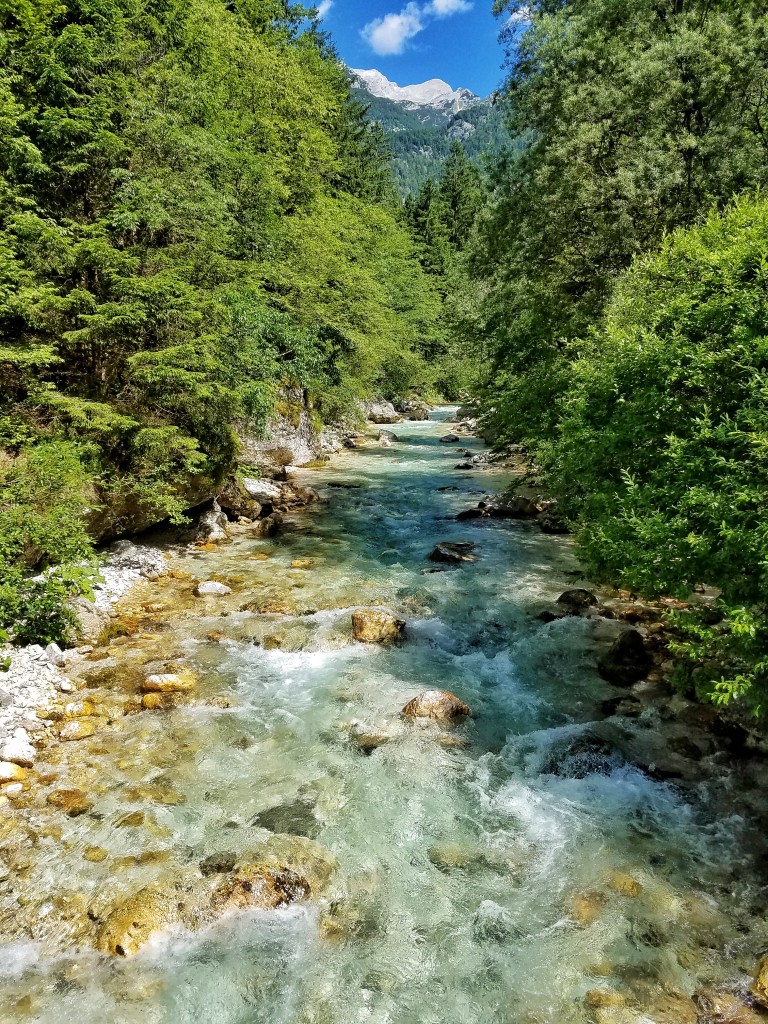 Most of our first day in the valley was spent taking our time visiting all the many points of interest along the Vršič Pass, so once we arrived in the town of Bovec later in the afternoon, we were happy to just stop in somewhere for a bite to eat, get a feel for the small town by walking around its center, and checking into our hotel, the charming and cozy Hotel Dobra Vila. 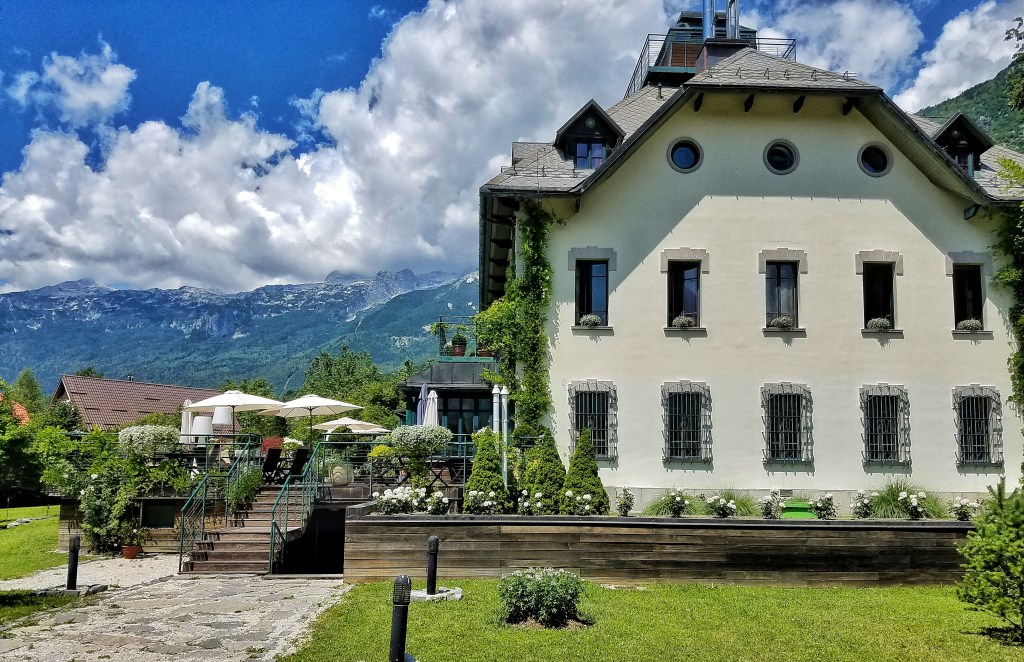 We were totally charmed by the architecture of Bovec, as well as its stunning setting.  There were literally dramatic mountains surrounding the town on all sides.  No matter which direction we looked, we were treated with snow-capped peaks, jagged ridges, and rocky outcroppings.  After strolling around for a bit we stumbled into a bar/apartment called Jojo’s, where we enjoyed a Laško beer while gazing into some gorgeous mountain scenery from the outdoor sitting area. 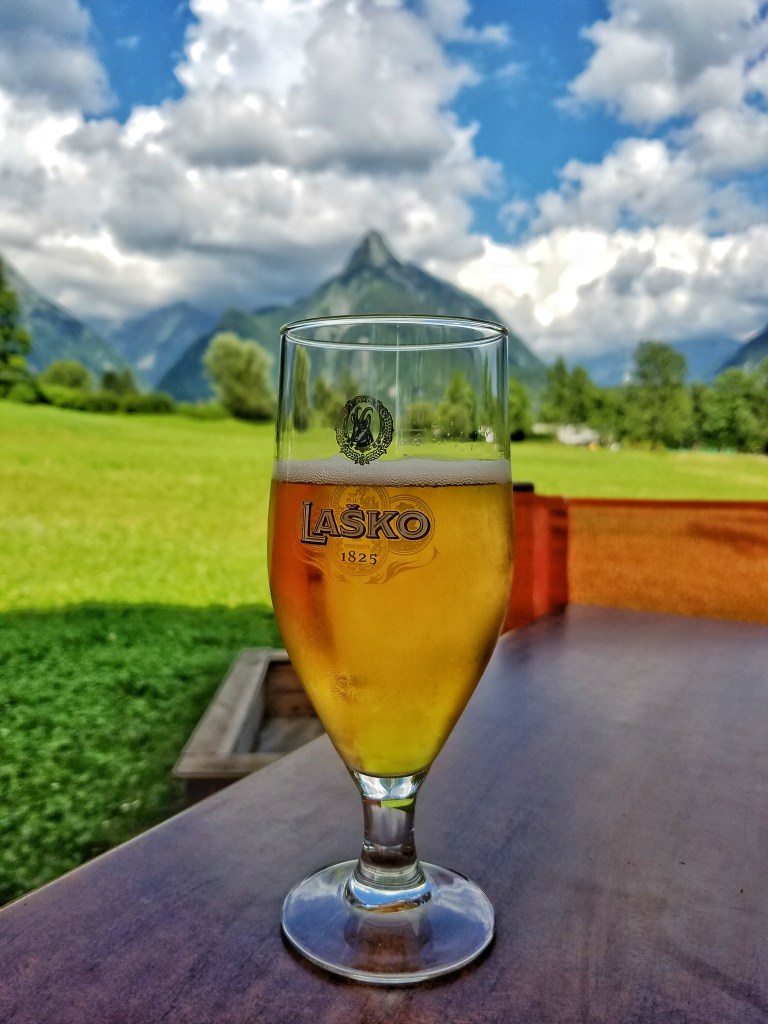 Later that evening, we enjoyed the ubiquitous Burek, a common street food found all over Slovenia.  Burek is a handheld pastry that comes filled with a variety of things, this particular one being cheese.  It was greasy and delicious, and the perfect fuel for the following day’s adventures on the Soča river. 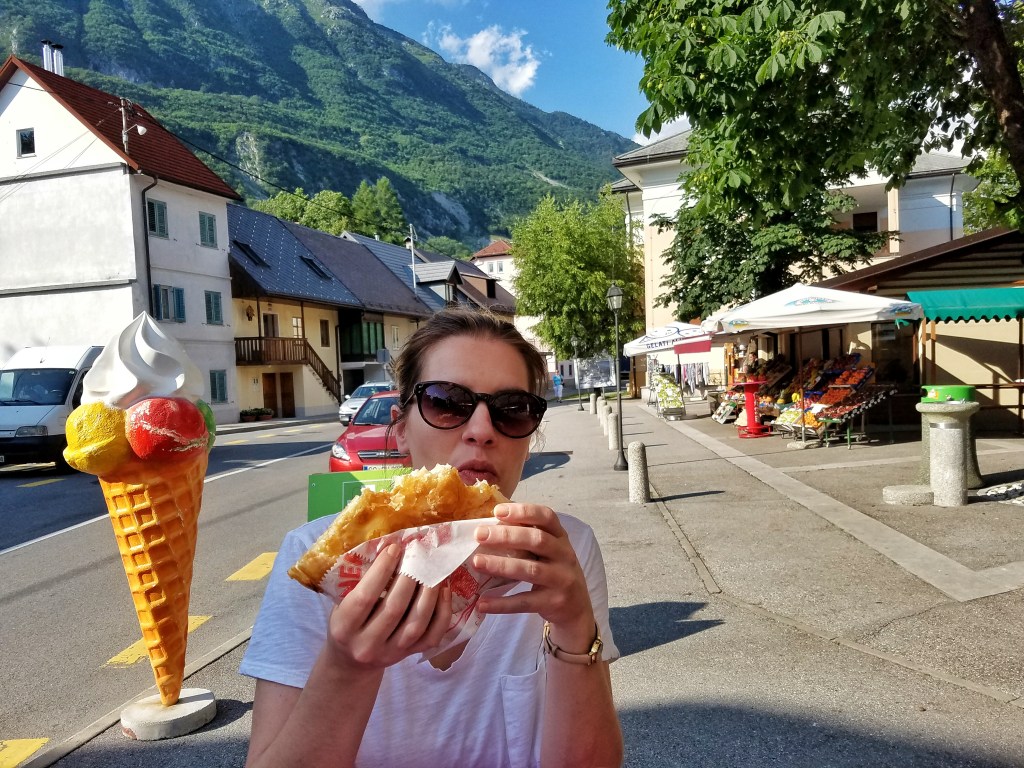 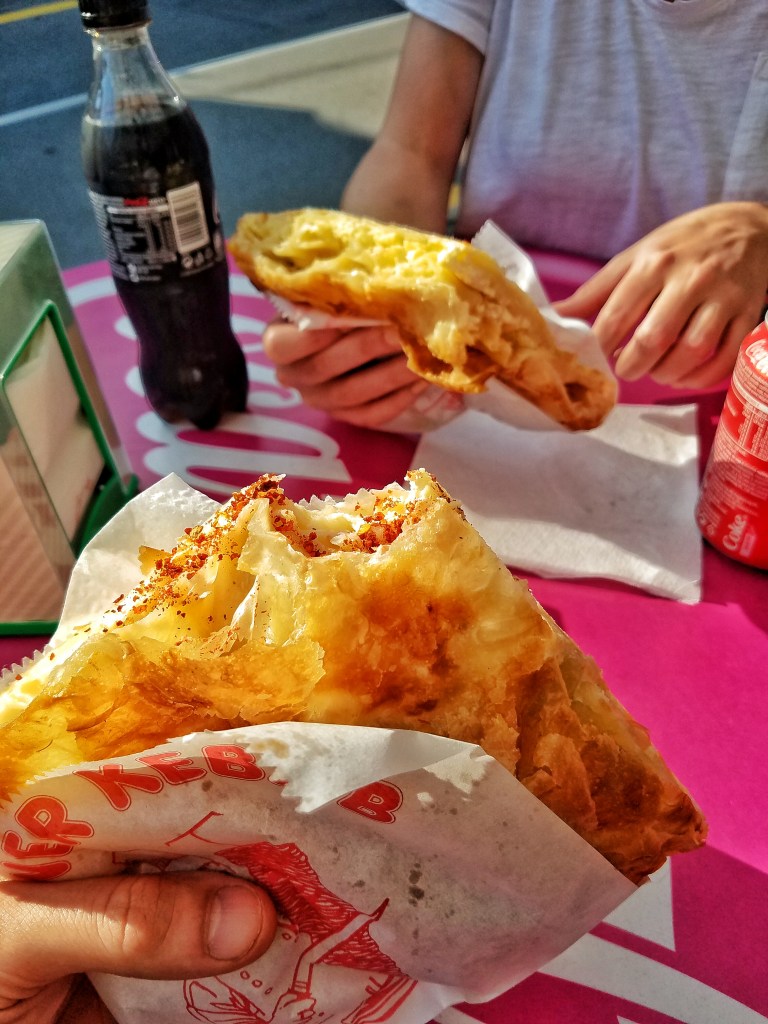 The following day we were booked with Soča Rafting Team to go hydrospeeding on the rapids.  Hydrospeed is a relatively new concept dreamed up on the Soča itself, in which the participant lays on what can best be described as a souped up boogie board, before navigating the fast flowing rapids, weaving between rocks and boulders.  We suited up in our neoprene wetsuits, strapped on our flippers, and were prepped by our guide on how to best navigate the river in this way. 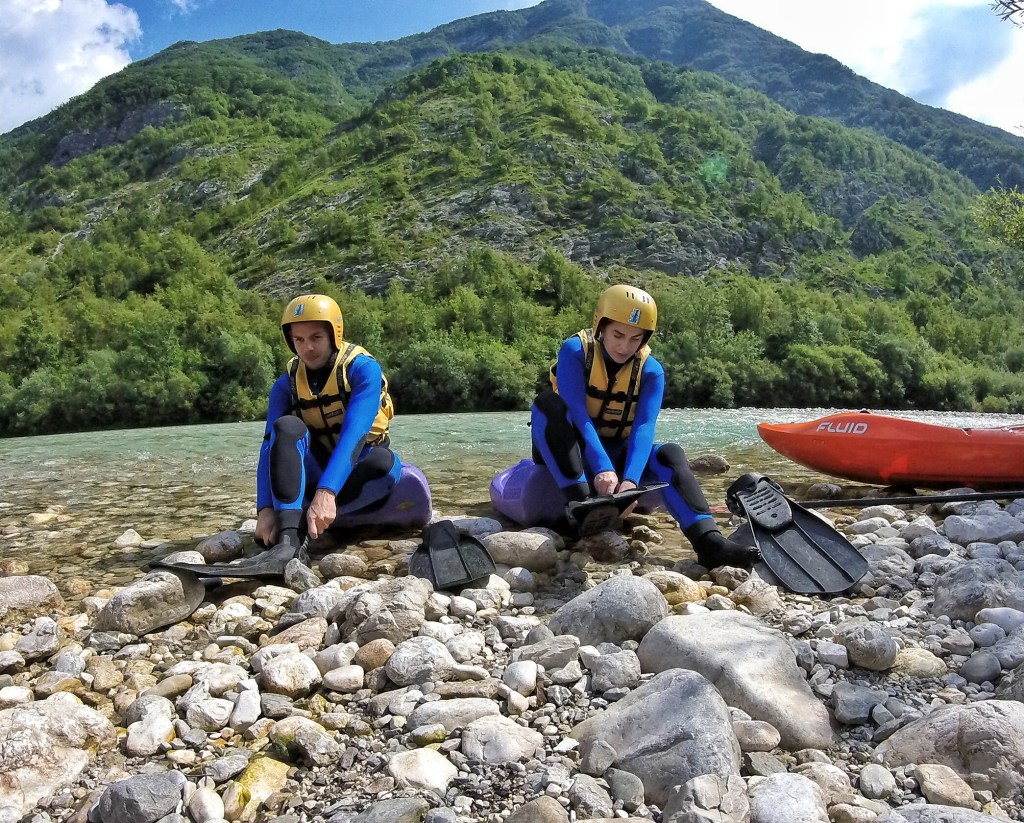 At the same time we were on the river, there were people enjoying the rapids in an actual raft all around us, but this way felt like a much richer experience.  Here we were actually in the river itself, using our flipper clad feet to navigate us around obstacles, while holding tightly to the board.  In numerous spots, the water was extremely shallow, and in more than one instance, Christina and I both banged the ever-living shit out of our legs on the rocks below us.  Overall it was a super exhilarating experience, and one in which we were glad to have chosen to have done. 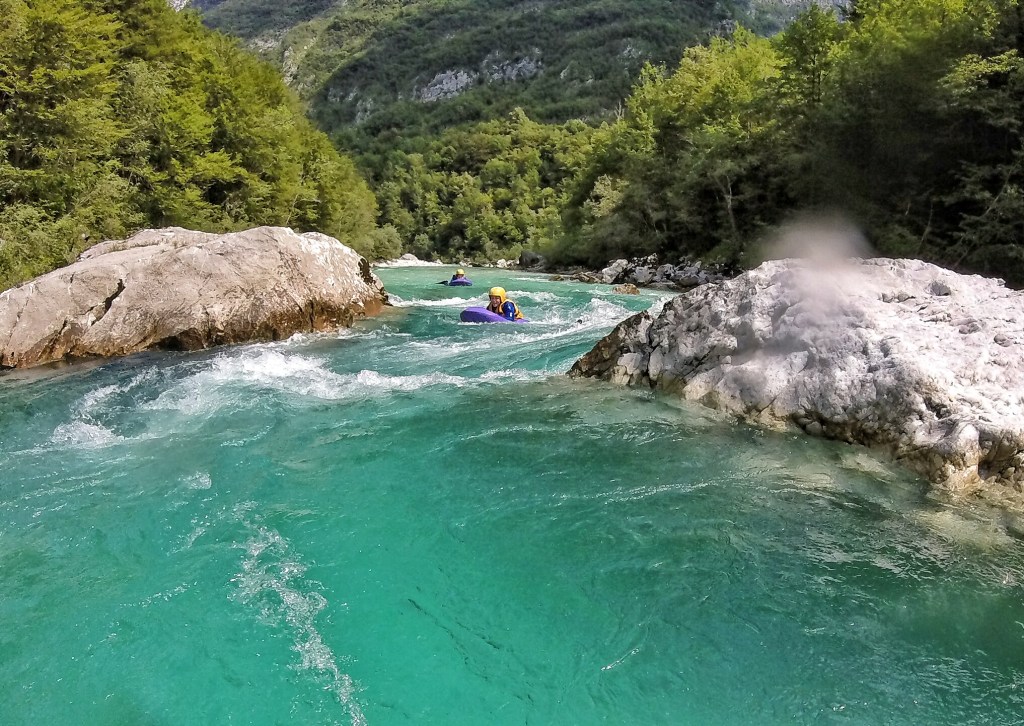 After spending a couple days in Bovec, we moved on to our next destination in the Soča Valley, the city of Kobarid.  We were staying at the amazing mountaintop retreat of Nebesa (detailed in an earlier post here) above the actual village of Kobarid, but planned a few visits down into the valley to check it out. 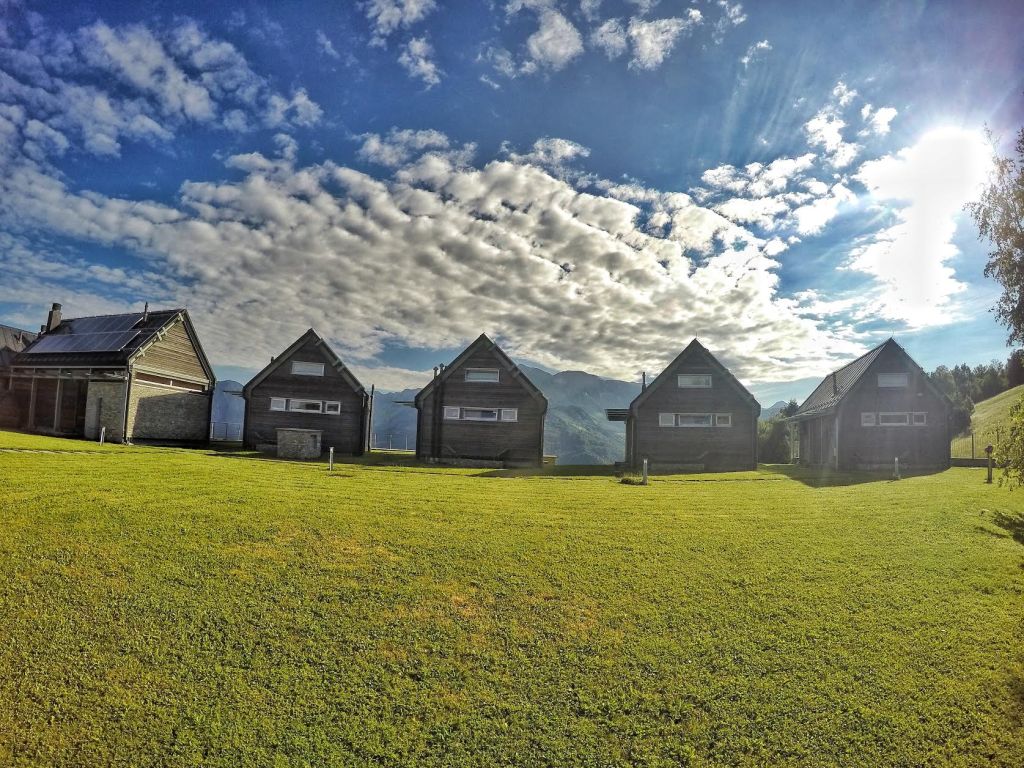 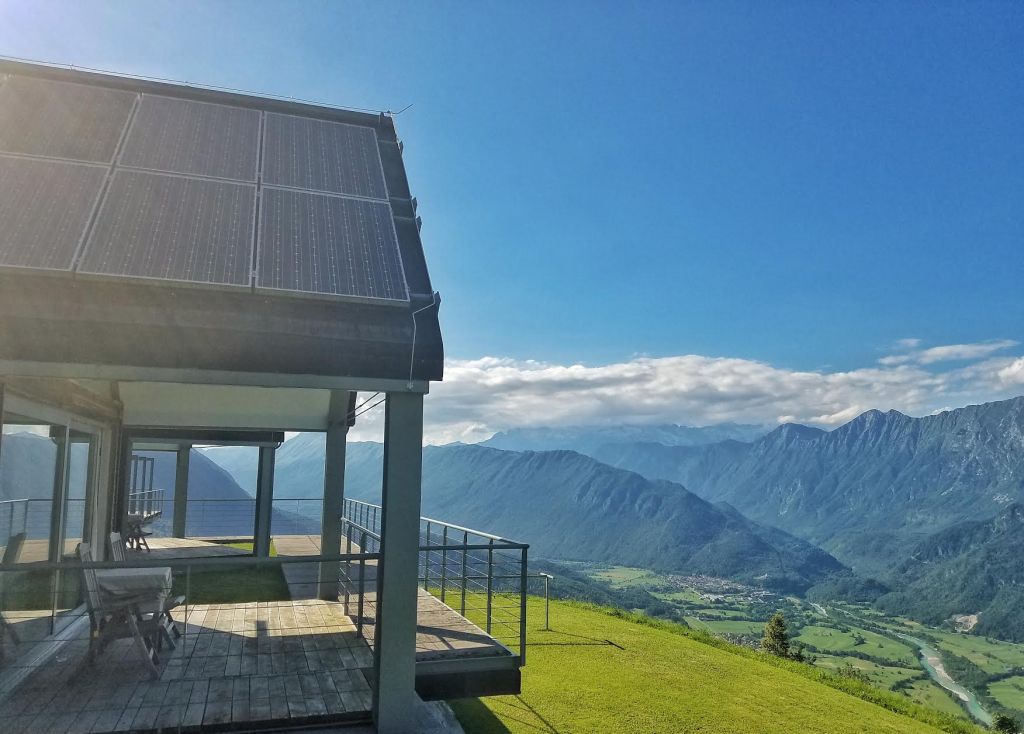 Kobarid was the site of an incredibly intense and bloody battle during World War 1, and one of the most popular things to do when you are in the area is to take the Kobarid Historical Walk.  The walk takes about 4 hours at a leisurely pace, and begins and ends at the WW1 Museum.  Along the walk, we encountered many relics  from the war, including bunkers, man-made caves, military equipment and monuments.  In addition to these man made relics, there is much natural beauty to be found along the walk as well. 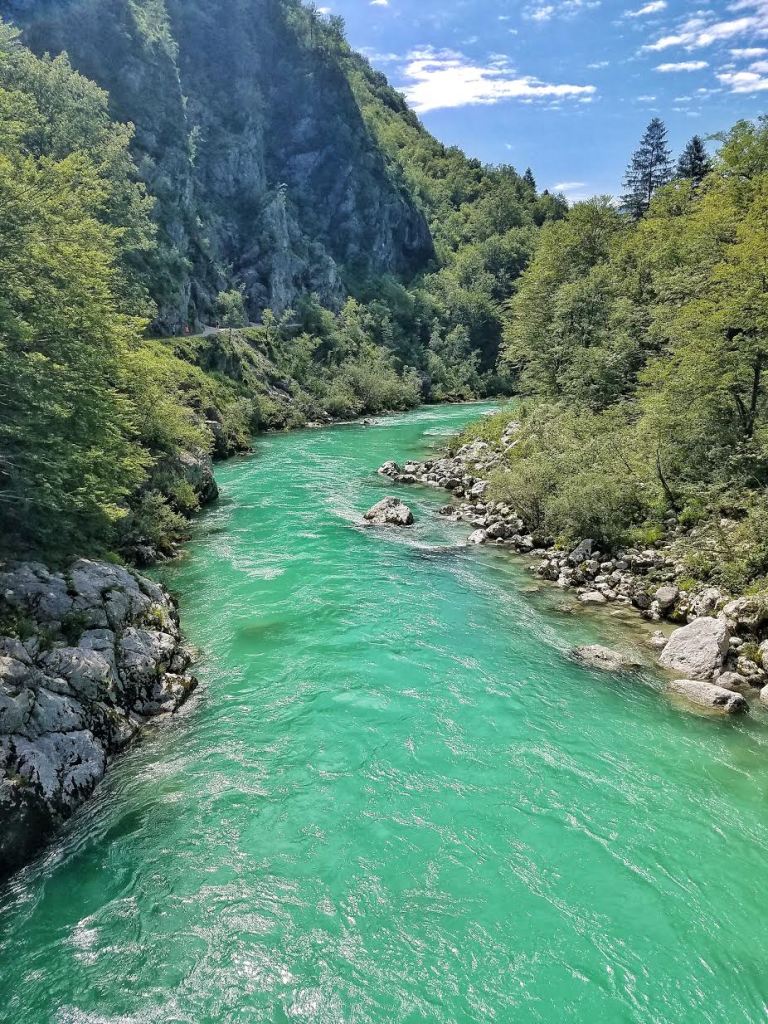 As we neared the end of the walk, there was an option to take a small detour to reach the Kozjac Waterfall.  After making your way through a gorge, you step up onto a wooden platform built into the rock face.  As you round a corner, you are presented with this stunning waterfall that has cut its way into the rock, and plunges into a shimmering blue-green natural pool. 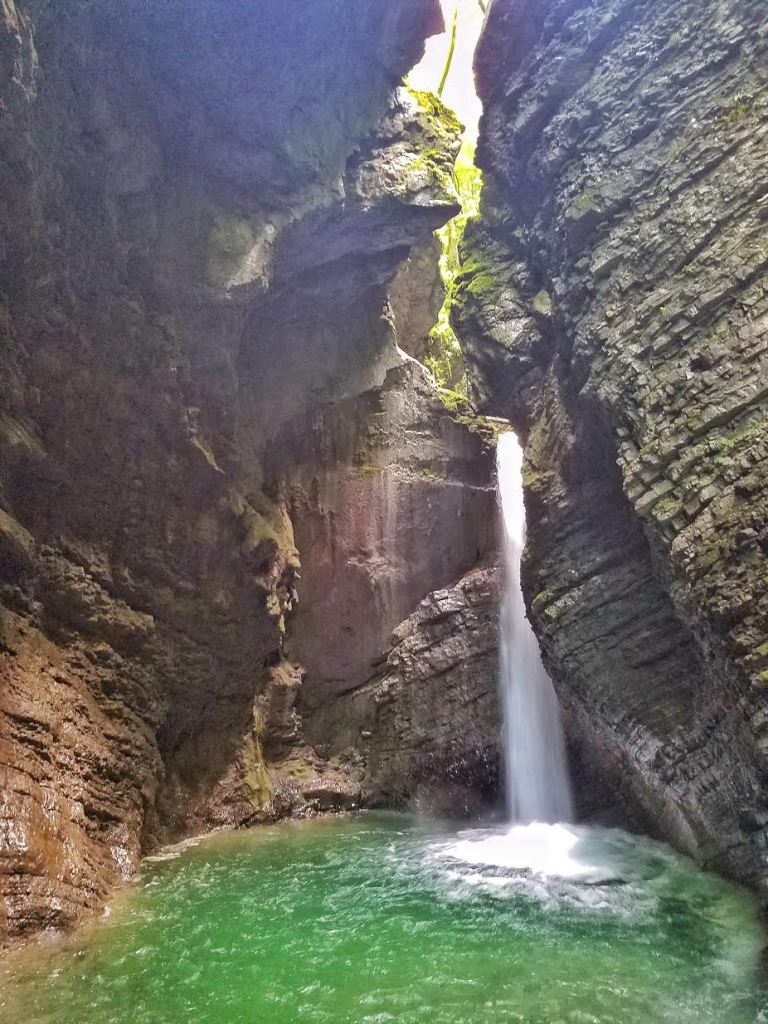 There were many places along the walk to stop and take in epic views.  The trail was pretty level in most places, but there are a few points where it is a bit more strenuous, with uphill walking, ascending many stairs, and walking along narrow ridges.  This hike would be suitable for people of any fitness level and would be great for families as well.  Be sure and pick up a brochure at the starting point so that you can have some context and references as you encounter things along the way.

The Soča Valley is located on the far western border of Slovenia, with Italy never more than a few miles away.  One of the last things we did during our 5 days in the area was to take a quick day trip across the border into Italy, because, well, how could we not go to Italy?  I mean, we were so close, and we’ve never been to Italy.  So from our cabin at Nebesa, we made our way across the border, where we encountered this dangerous and crowded border crossing: 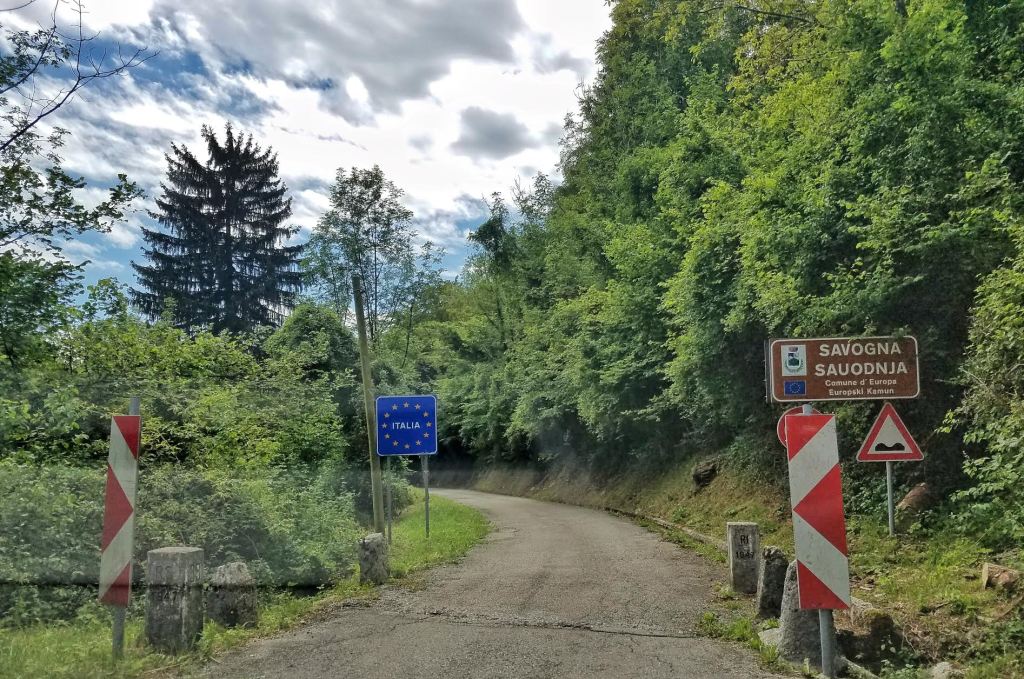 Actually, since Slovenia and Italy are both part of the Schengen zone, there is no need to stop and have a talk with border agents, or show your passport, because it’s all unmanned.  There was an abandoned guardhouse here, but nobody on duty, as there probably hasn’t been in decades.  From here, we made our way into Cividale di Friule, where we found a beautiful, very Italian-looking village, with just about everything closed down.  It turns out Italy observes something called “Riposo”, a traditional early afternoon shut down of businesses, similar to the Spanish siesta, in which business owners can go relax for a few hours, take a nap, or have a capuccino.  Even though most of the town was shuttered, we still found a nice outdoor cafe that allowed us to sit out and have a beer, and we enjoyed strolling the narrow streets and admiring the ancient architecture around us, with virtually no crowds in sight. 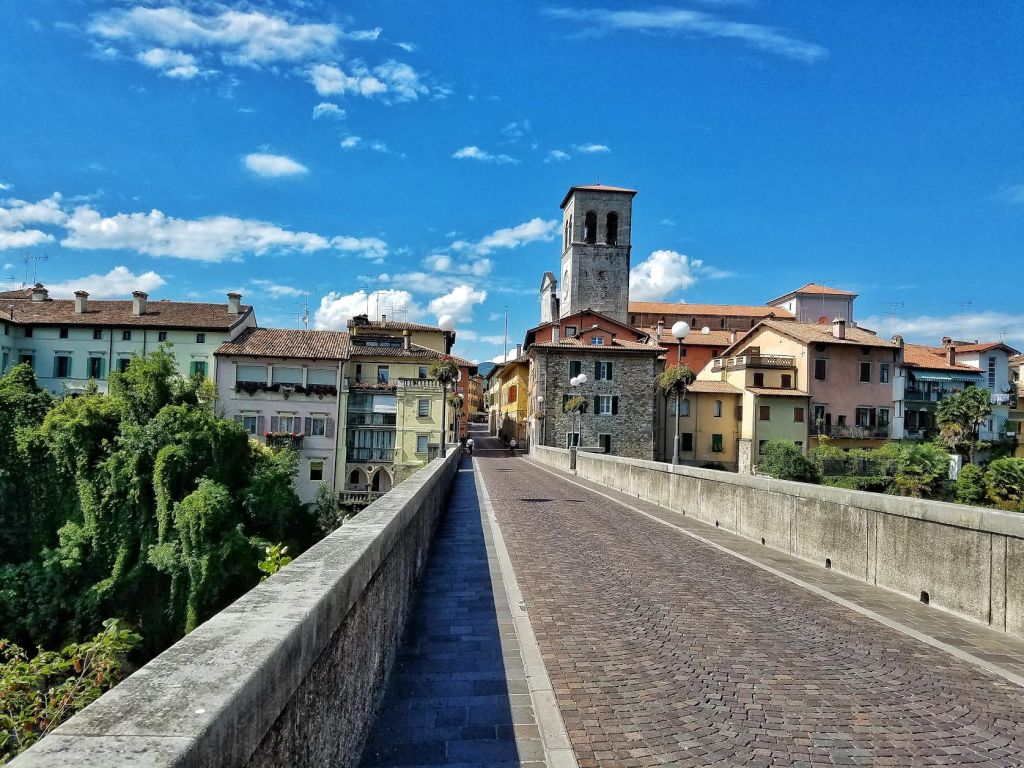 After spending a relaxing afternoon in Italy, we drove the 30 minutes or so back to Slovenia for our last evening in the Soča River Valley.  The following day we would be heading for Slovenia’s tiny coastline, the charming Mediterranean town of Piran.