After a couple of years of going on full throttle travel adventures, we were quite happy to slow things down a bit and head to the Caribbean for some sun and relaxation.  After having visited Iceland the previous month, we figured:  what better follow up trip than the exact opposite – the tropics. No hikes planned, no mountain climbing, no adrenaline pumping activities, just plenty of laying on the beach, dipping in the water when it gets too hot, and drinking during the daytime.  That was the agenda for this trip.

We have always been more of the “off the beaten path” type of travelers, and I was looking for an island that had few crowds, plenty of nature, mountains (a personal requirement on my trips) and crystal clear water.  St. John had been floating around my “Places to Visit” list for the past few years, and so I figured its time was finally up.  St. John is around 90% designated national park area, meaning that no substantial infrastructure has taken hold there.  You won’t find massive resorts, big hotel chains, or obscenely oversized cruise ships pulled up into port here.  It’s just you, some friendly locals, a few other tourists, and huge numbers of donkeys and chickens.  It had been a few years since traveling with my parents, and I have always enjoyed traveling with them, so we asked them to come along on the trip.  I did not have to ask twice!  We decided to treat ourselves on this trip and booked  ourselves a couple of first class tickets, because why not start the relaxation process before we even arrive? The views from the plane as you fly over the Caribbean are a sight to behold, for sure.  Click “read more” after the jump. 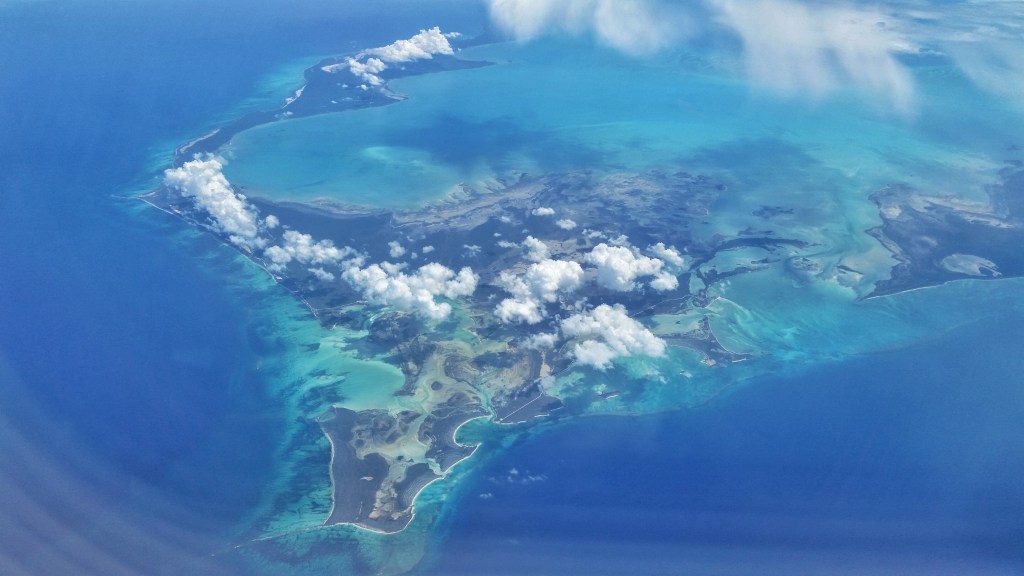 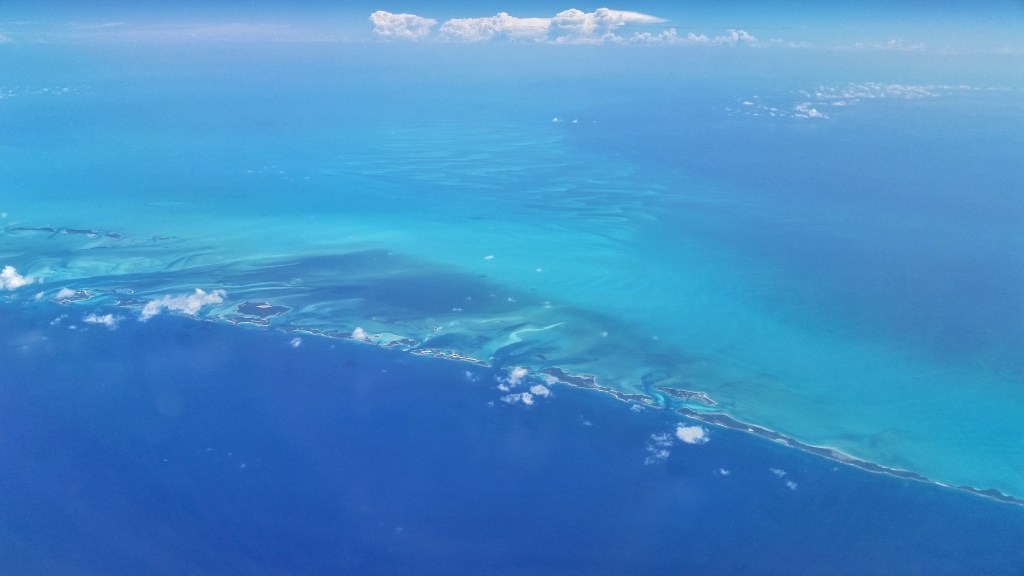 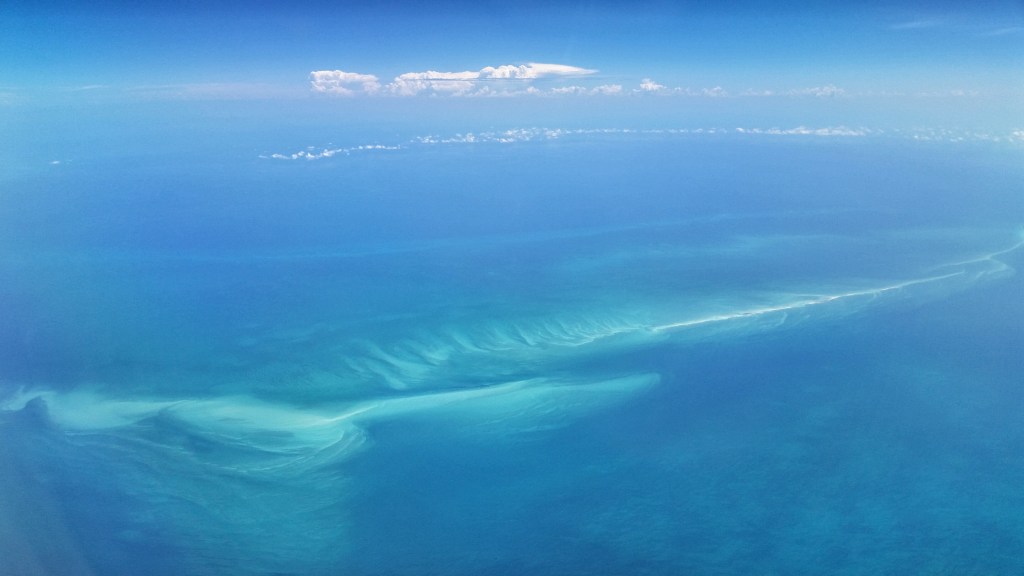 Since there are no airports that service St. John, you fly into St. Thomas, then take a taxi to one of the 2 ferry docks on the east end of the island and head on to Cruz Bay, the biggest city in St. John.  The best way to get around the island is by rental car, and you’ll definitely want 4WD, as it is extremely hilly on the island, with many rough, steep, rocky roads to be found.  After being met by the guy who was to show us the way to our villa, his first order of business was to inform me that drinking and driving was legal in St. John.  I chuckled at his little joke and noticed he kept a straight face.  He wasn’t joking.  I think I might like this island!  We were staying in the more isolated community of Coral bay on the east end of the island in a rented cottage named Villa Tiffany.  The house was perched high up on a cliff overlooking Coral Bay, and the drive up to it was a bit perilous with an extreme upward slope.   The drive up was paved about halfway, and then it became gravel for the remainder of the drive.  I’m thinking this might be part of the reason it was only partially paved: 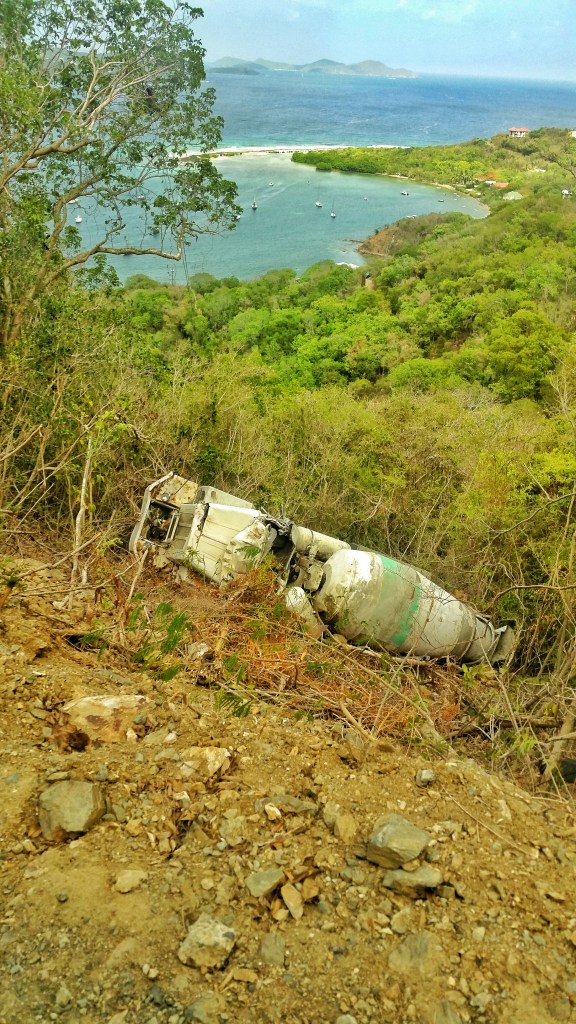 This cement mixer had obviously been resting at the bottom of this cliff for at least a handful of years, but you couldn’t help but feel sympathy for the poor guy behind the wheel.

We made it up to the house in 4 wheel drive and found the trek to be totally worth it.  The view from the balcony here has to be the best one on the island. 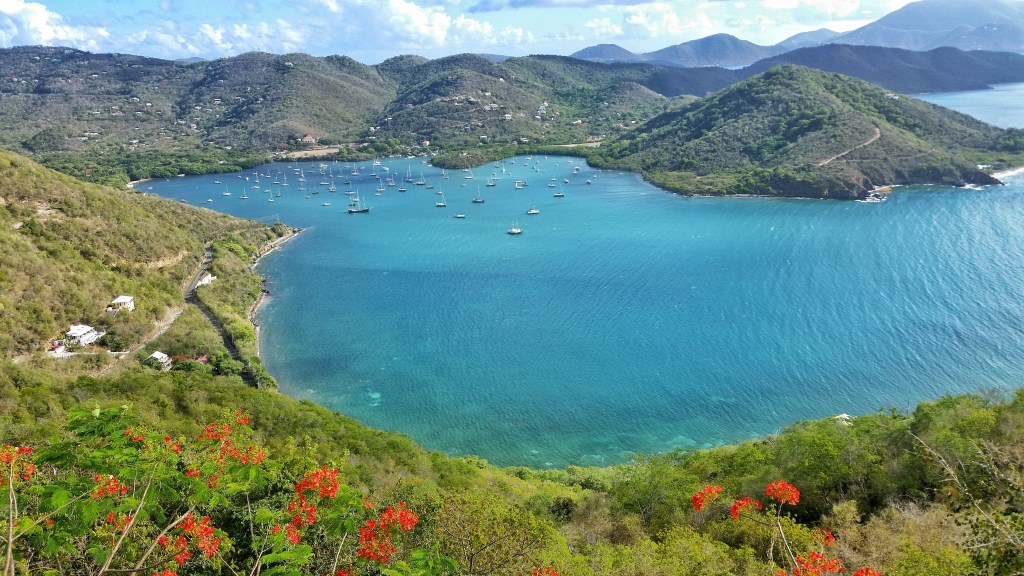 What a treat to wake up to this view every morning.  It was especially breathtaking at sunrise. 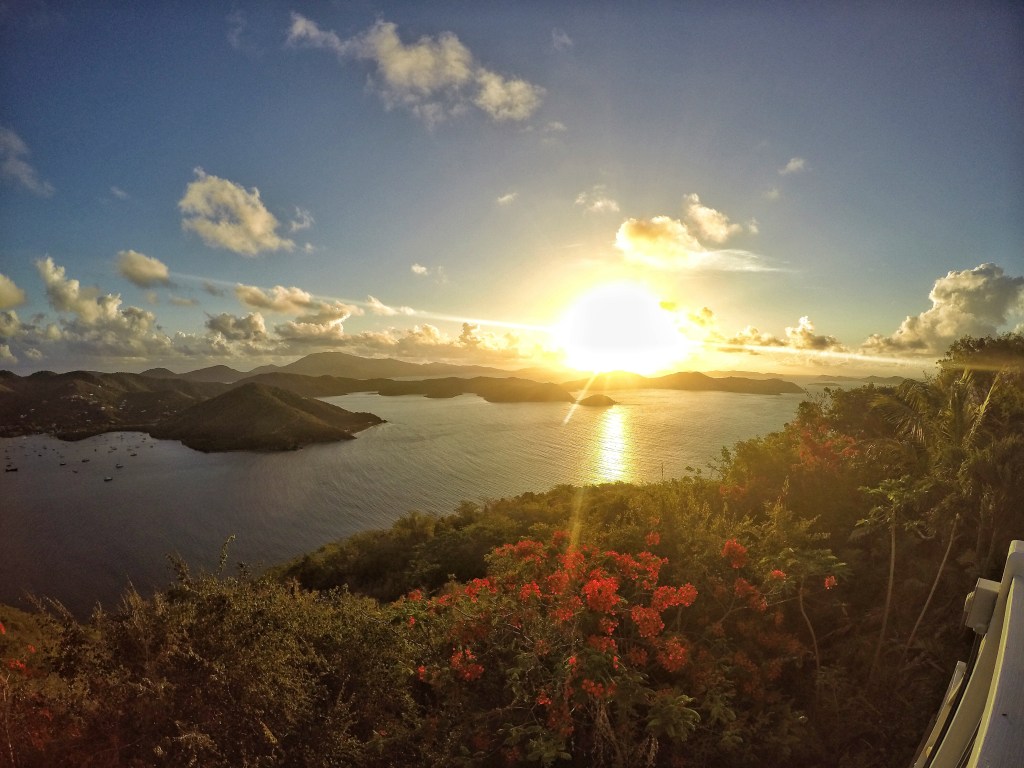 On our first full day on the island, we decided to visit Maho Bay for our first beach experience.  I had read many great things about this beach, and it certainly didn’t disappoint.  Getting places early is always beneficial, we have found, and the “before 10AM” rule we have for our travels served us well here, as we were some of the first people on the beach.  The water at Maho was crystal clear, the winds light, and plenty of shade to relax under the palm trees and mangroves.  The water temperature hovered right around perfect. 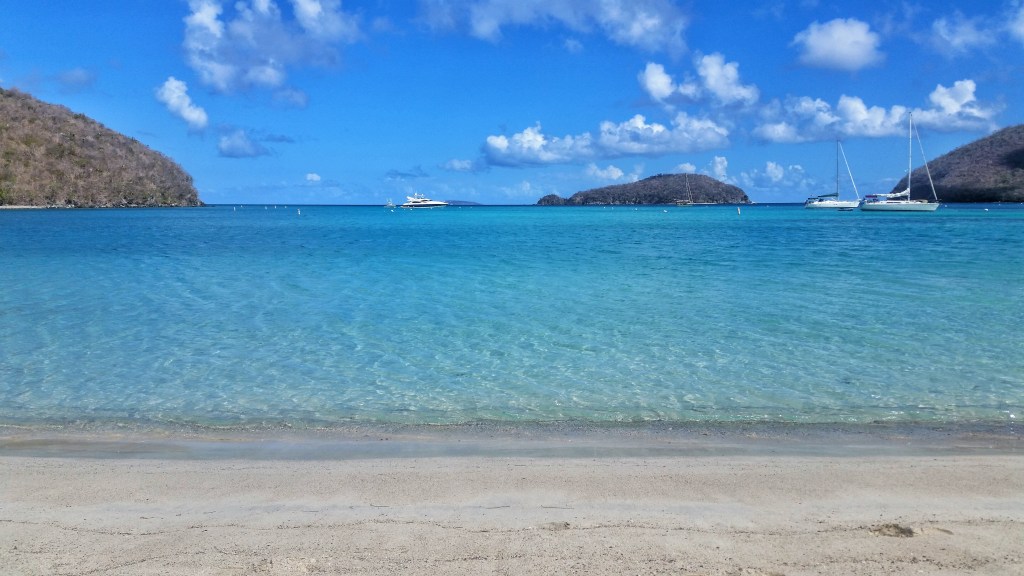 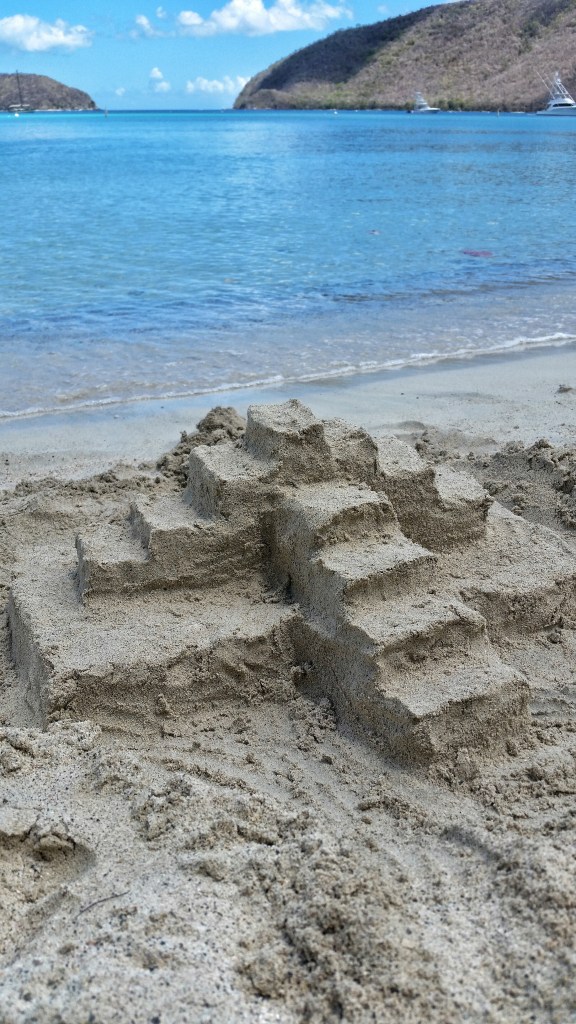 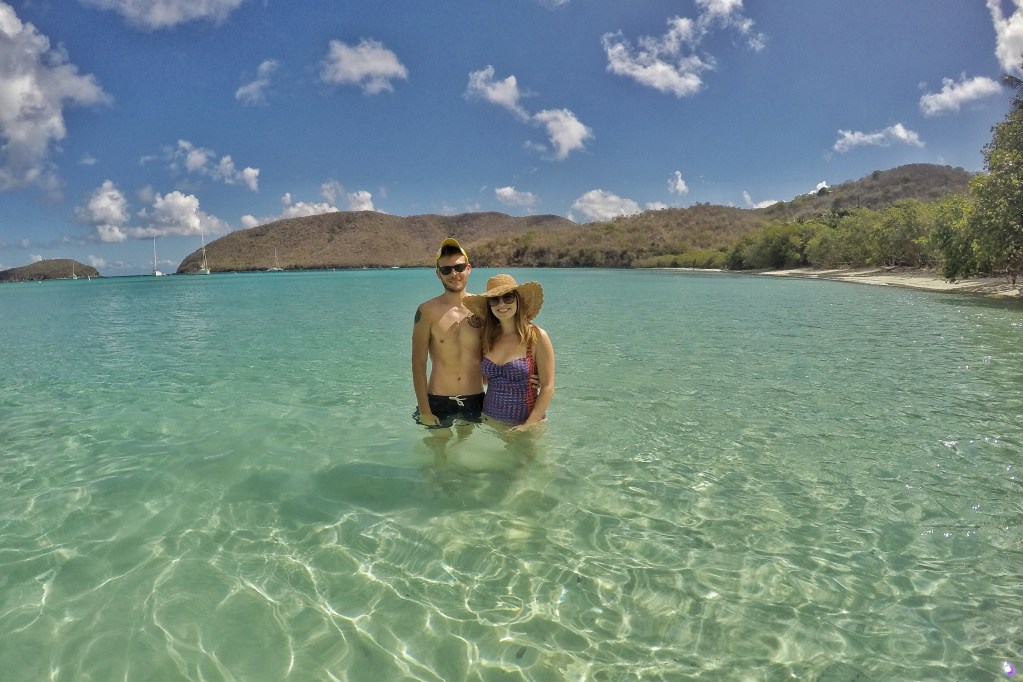 We spent a few hours at Maho, then decided to hit the grocery to stock up on some essentials at the grocery store, and then retire early back at the villa.  The house had a nice pool and hot tub, along with some nice lounge chairs overlooking the stunning bay, so we were more than happy to spend the rest of the afternoon and evening there, just taking it all in. 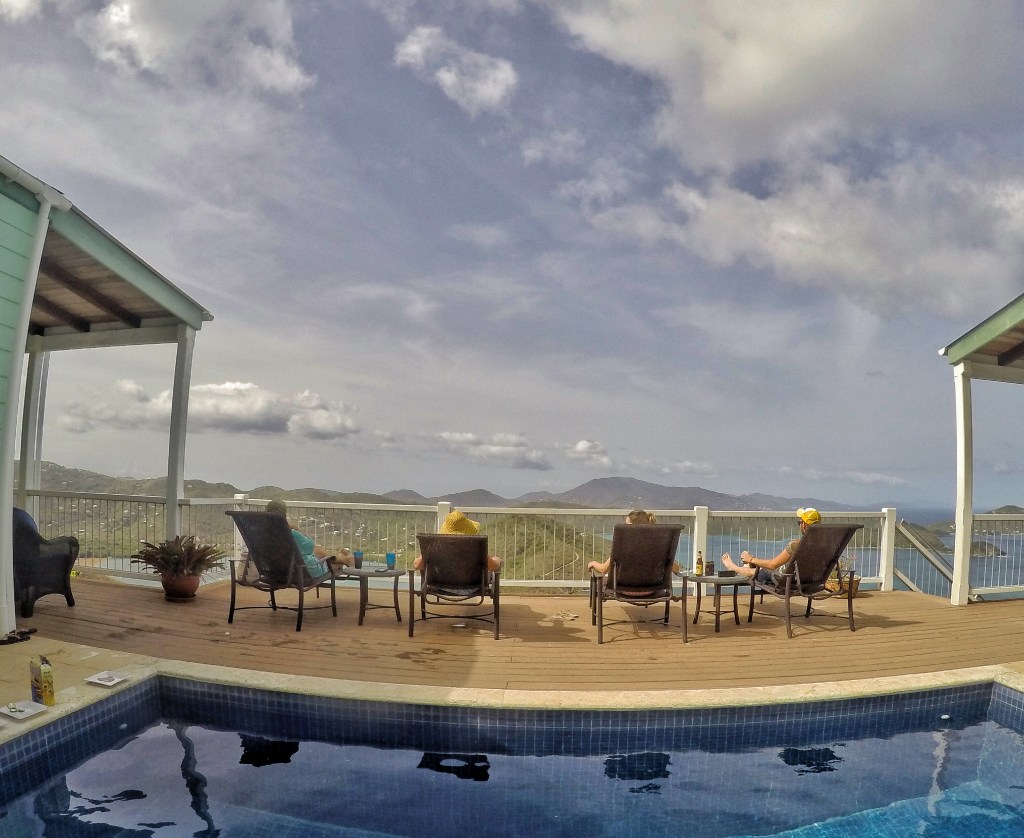 The following morning I woke up early to try and capture a time lapse of the sunrise over Coral Bay with my GoPro.  Standing outside at 5:30 AM in my groggy state getting ready to set the camera up, suddenly the very heavy sliding door somehow came off its hinges and fell on to me.  I did not see it coming, so I didn’t have the time to put out my hands to try and stop it, and it landed directly on my elbow.  It swelled up pretty good that day and my right arm was mostly useless to me for the rest of the day.  No real damage done, as it felt better by the next day, but as I write this I am developing a nice little scar – I guess it’s a bit easier and cheaper than getting a tattoo to commemorate a trip.  Needless to say I did not capture the time lapse this morning.  The sunrise was still nice despite my aching arm: 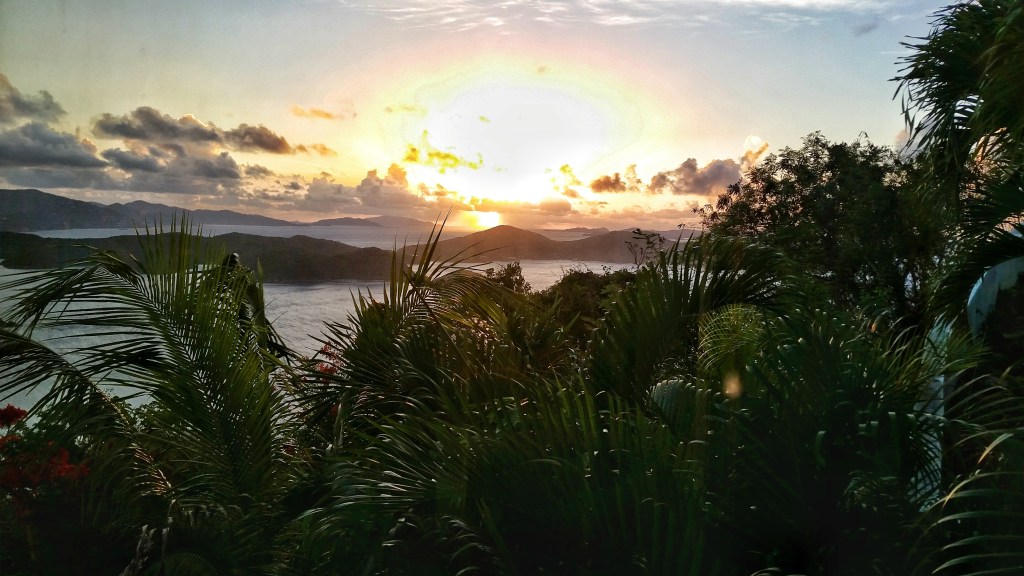 We hit the road early once again to get prime beach real estate.  The agenda today was to hit up the most famous of St. John beaches:  Trunk Bay, which if you google image St. John is usually the beach you’ll see in the pictures. We got there around 9:30 and found ourselves to be essentially the only ones on the beach.  Perfect.  As the afternoon arrived, so did the crowds and we eventually decided to call it quits once the beach started to get a bit more crowded.  Before we left, however, we did a bit of snorkeling on the underwater trail and saw plenty of beautiful fish and coral.  A friendly stingray even made an appearance close to shore. 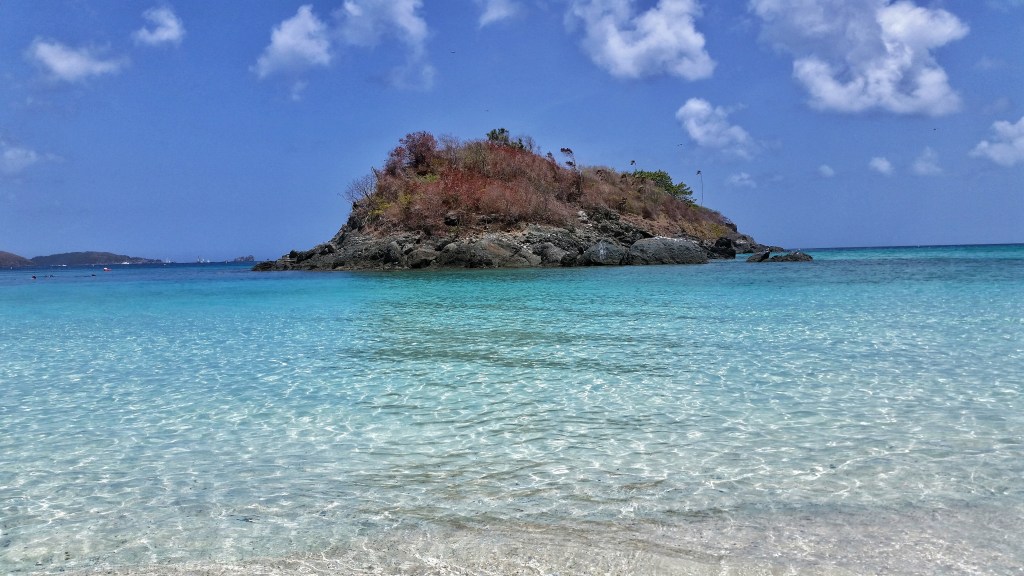 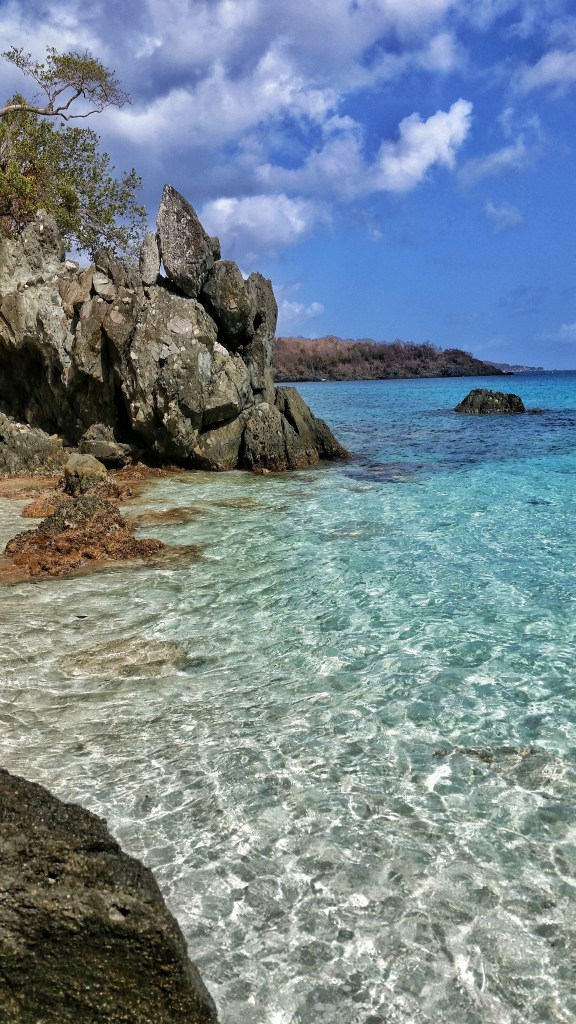 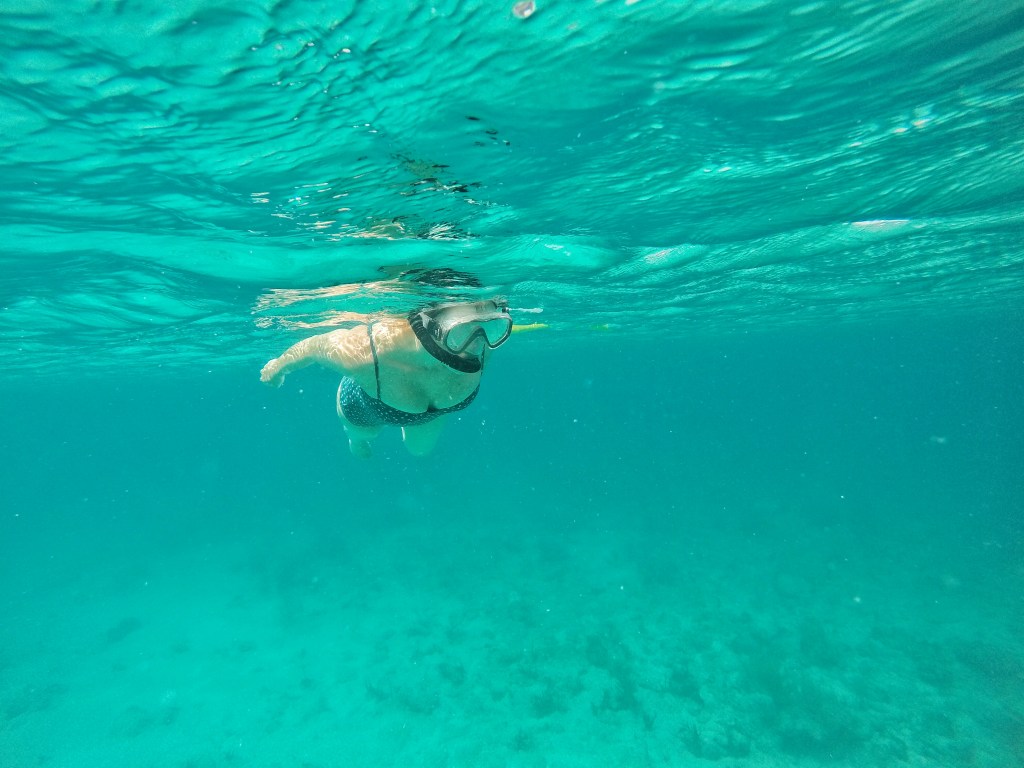 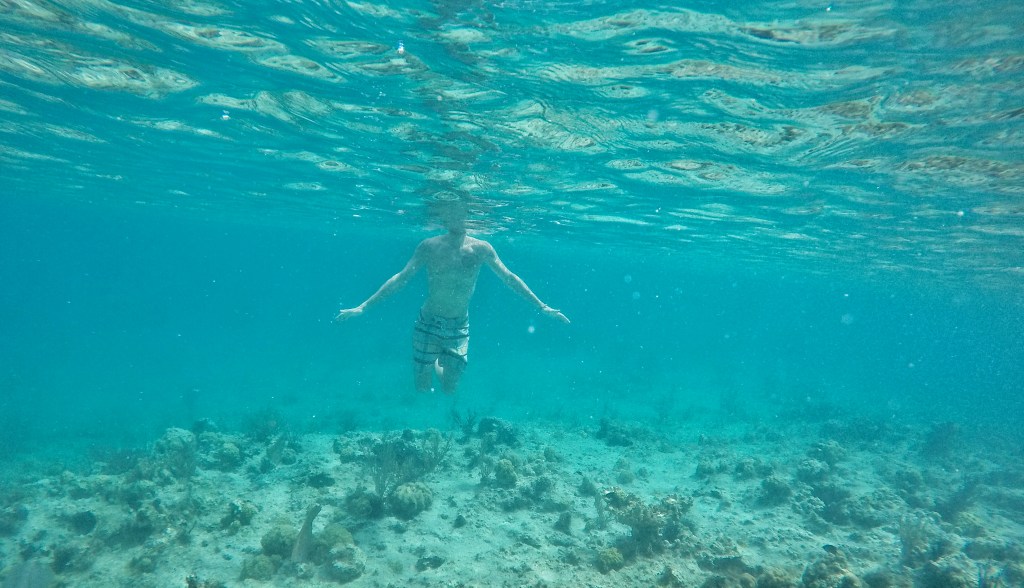 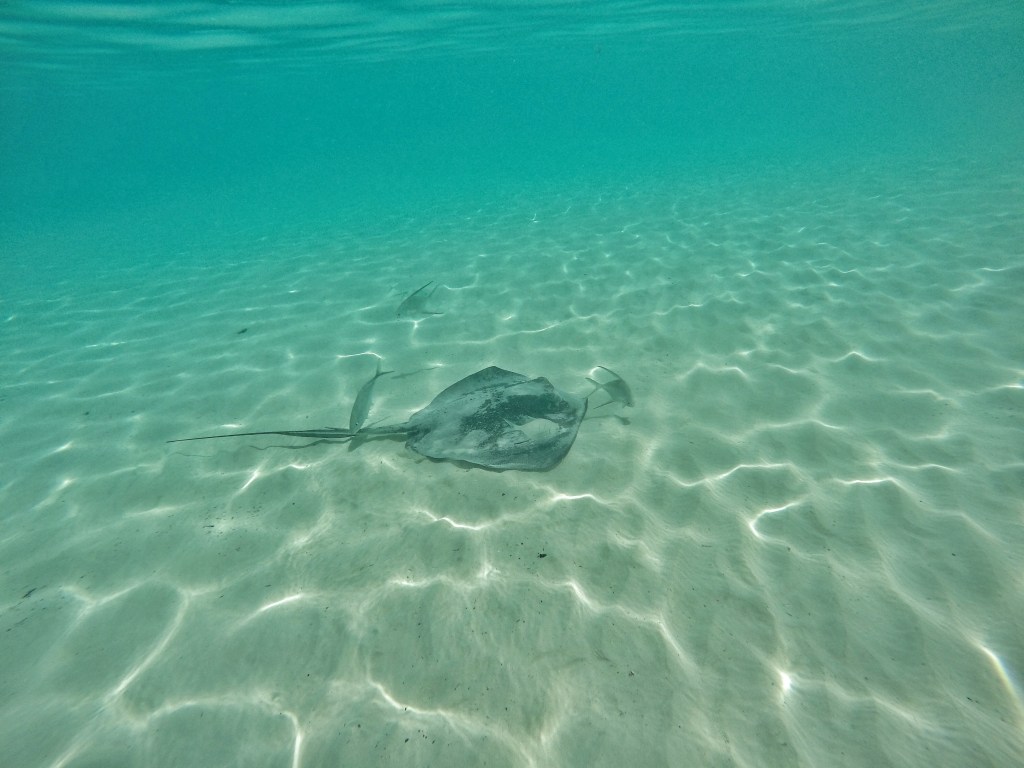 From the shoreline, we noticed a viewpoint high above us in the hills, and decided on the way out we would stop the car up there.  I was glad we did, as it turned out to be the iconic viewpoint over Trunk Bay that is basically in every advertisement for visiting St. John.

You can see the people on the beach from here, so as you can see it wasn’t terribly crowded, but when you start the day as the only people on the beach, 40 or 50 people showing up can feel very packed.  I should also point out here that the surroundings on the island are usually much more green than you see here, but St. John has been in a 7 month drought at this point, leaving the foliage looking a bit drab and brown.  Driving around the island, it looks a bit like fall with the yellows, oranges and browns in the canopy, and plenty of fallen leaves.

On the way back to the villa, we stopped for lunch at Pickles in Paradise, a great find for vegetarians and non vegetarians alike.  I had a delicious teriyaki wrap, and we picked up some great hummus, beet salad, and fresh papaya slaw for dinner at the house that night.  It was my favorite food stop of the trip.  On the ride home, I decided to finally take advantage of the legal drinking while driving and had a beer.  Now, drunk driving is still illegal, mind you, and very dangerous.  But having a beer while you go from one beach to another is not out of the question. 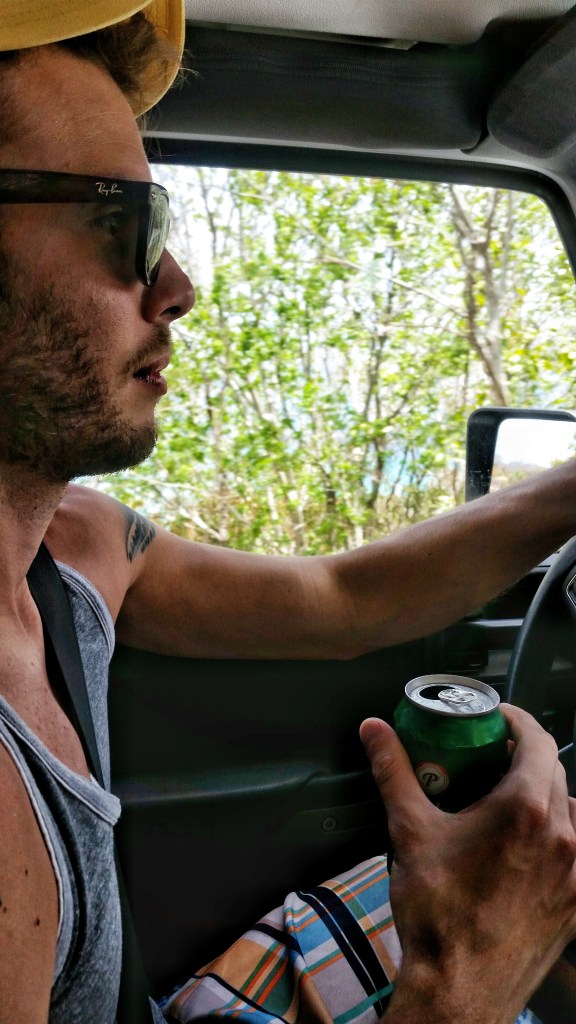 The following day we went to try out Cinnamon Beach.  The goal was to rent a couple stand up paddle boards, but the winds were insane and the water very choppy at this beach.  It was a lovely area, but the paddle boarding seemed out of the question.  The fish in the water here were also abnormally aggressive, there must have been a breeding ground nearby. 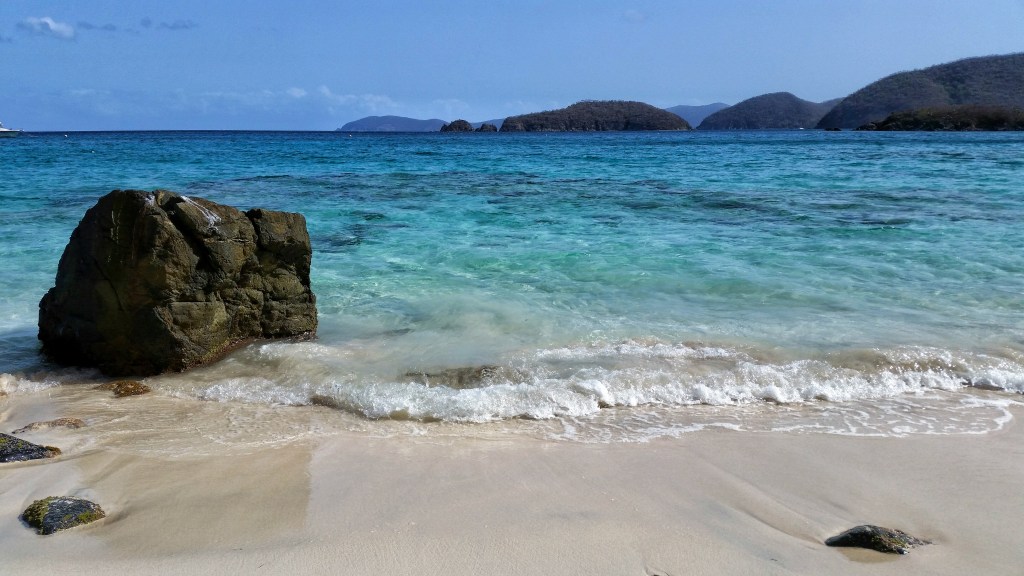 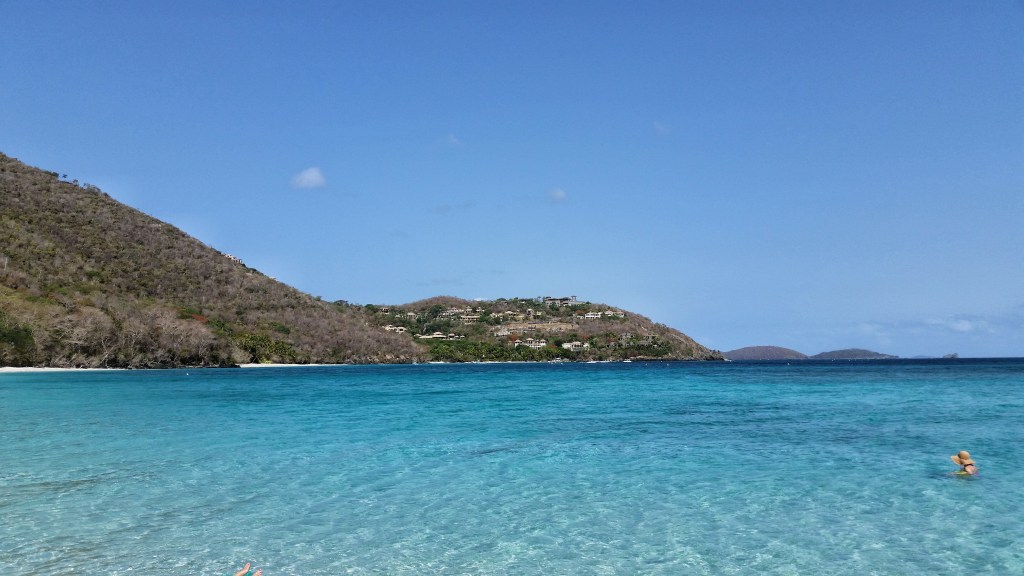 We spend about an hour at Cinnamon, and decided the whipping winds and angry fish were not the relaxation we were hoping for and decided to go back with our old standby, Maho beach.  A quick drive just up the road and we found ourselves to be basically all alone once again on the stunning Maho Beach. 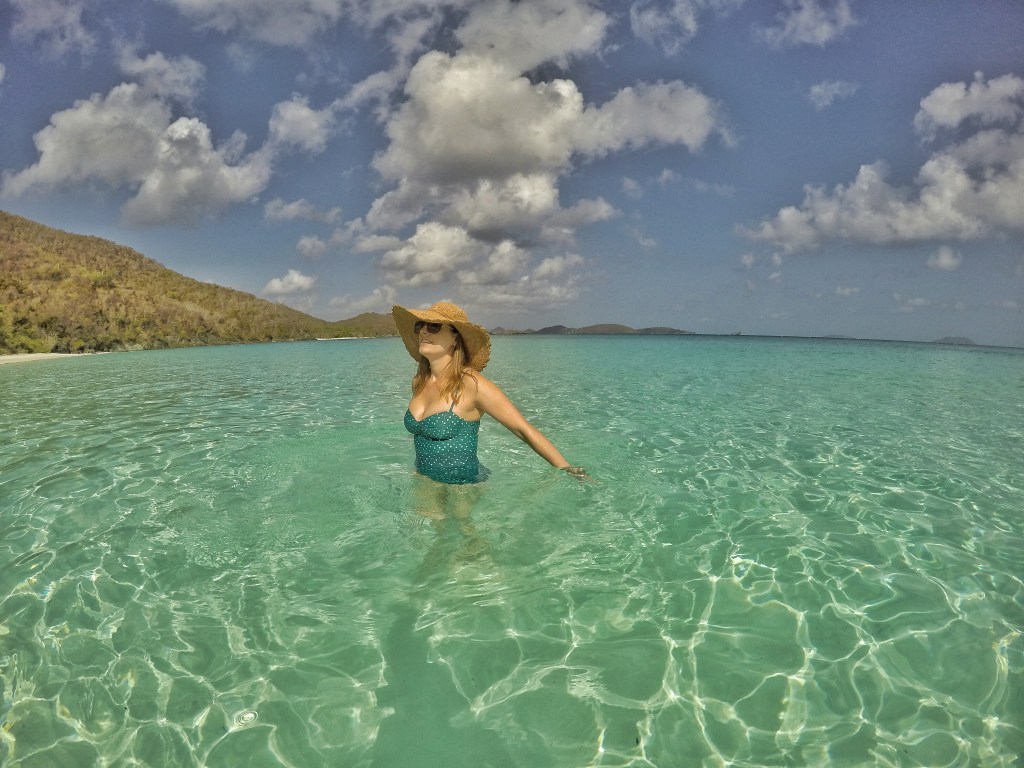 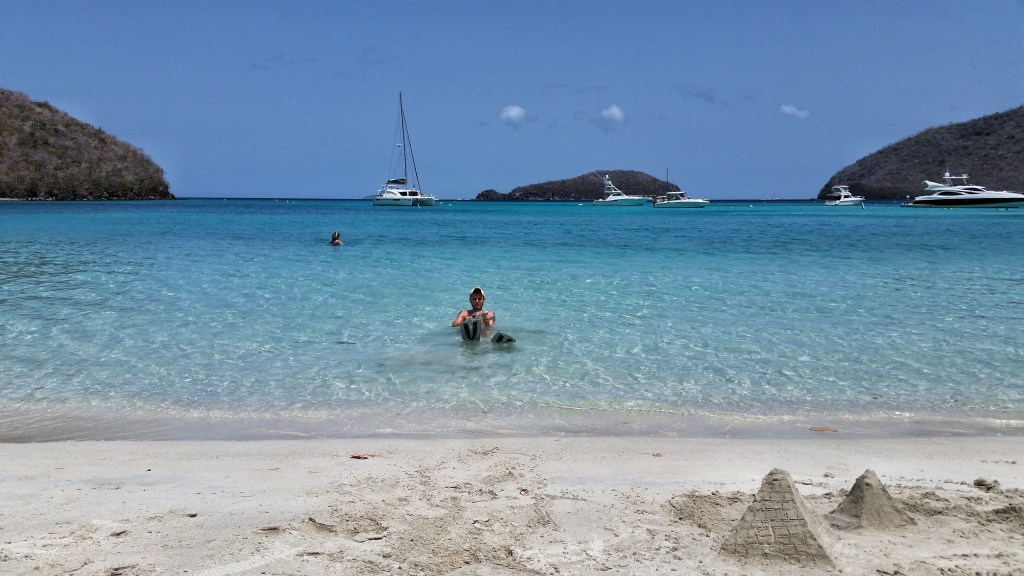 As you can see above, I attempted recreating the Great Pyramids of Giza here, the Sphinx I added to the mix later not pictured here.

We departed Maho after a few hours and had our final dinner of the trip at Skinny Legs bar and grill.  I was continuously surprised at how many vegetarian options were available at restaurants around the island – I had a vegetarian reuben sandwich here, and it was very tasty.

The following morning, a took my final attempt at getting my time lapse, and had great success this go around.  You can view it here.

A few quick passing showers rolled through this particular morning, giving a beautiful, varied view of the bay below us. 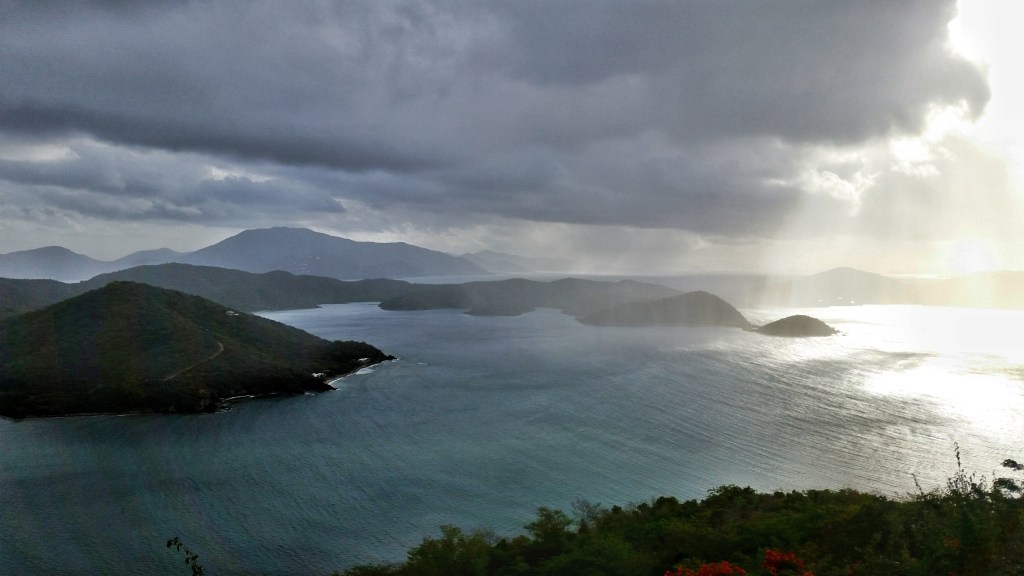 Our time was up on the peaceful island of St. John.  Though it was quite a journey to get here (planes, boats, and automobiles), it was worth the trouble and we were glad we chose it as our getaway. 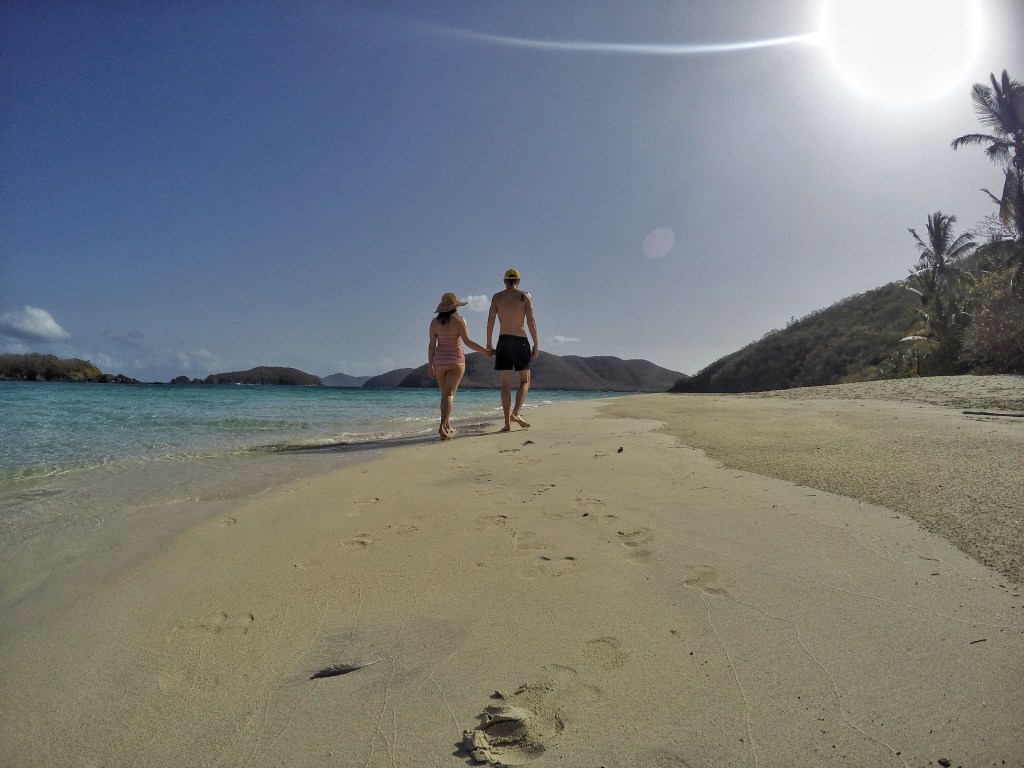 7 thoughts on “Getting off the beaten path in St. John”